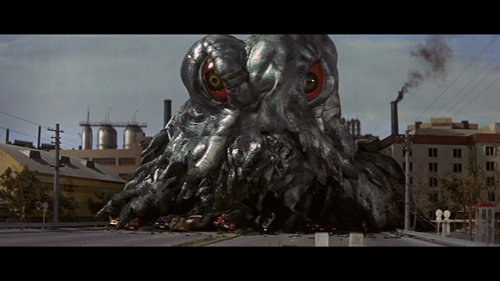 Arriving on the scene amid hippie-drippy pleas to Keep America Beautiful, don a pair of Earth shoes, and stamp out litterbugs, 1971's Godzilla Vs. Hedorah had our favorite pebble-skinned Japanese beastie reborn as a humungous pollution fighter - right on with yo bad self!

While this 11th entry in the never-ending Toho series had the usual guy-in-a-rubber-suit cheese and a super-annoying kid as the lead character, this trippy, misguided eco-trip went down as one of the weirder entries in an already weird series - when the climactic battle between Godzilla and slime-spewing enemy Hedorah emerges as the most "normal" part of the movie, that's really saying something. As if to guilt-trip the audience, Hedorah presents Godzilla's latest foe - a rapidly evolving creature capable of killing dozens with a single belch of toxic spew - as a product of humankind's callous pollution. That oughta give that weeping Indian something to bawl about.

Godzilla Vs. Hedorah follows the same kid-friendly template that Toho was pursuing at this point - with a difference. Seemingly influenced by television commercials and Sesame Street, director and co-screenwriter Yoshimitsu Banno spices up this otherwise typical entry with wild musical segments, trippy animation, novel scene transitions, and dizzying montages. It made an impression on me as a kid with the American-dubbed version, Godzilla Vs. the Smog Monster, shown on Phoenix's local Saturday morning Sci-Fi/Horror movie program, World Beyond. Even today, the stylistic flourishes astonish in what is an otherwise cheesy, standard outing.

This time, we have Godzilla facing off against Hedorah, a constantly mutating acid-spewing slime monster which evolved out of nuclear waste and garbage thrown into the Pacific ocean. The film opens with ominous news reports of a creature upending ships and causing destruction. Young Godzilla fan Ken (Hiroyuki Kawae) and his scientist dad, Dr. Yano (Akira Yamauchi), get an early taste of the creature's destructiveness when they're injured by its acidic secretions. Dr. Yano eventually deduces (and with one functioning eye, too!) that the creature's capabilities are a thousand times more terrifying than people realized - it can rapidly multiply and evolve at an accelerated pace. In short time, Hedorah adopts the ability to walk on land, suck on a factory smokestack like a giant bong, and terrorize a group of groovy dancing teens at a psychedelic nightclub. Flying above Tokyo in a stingray-like form, Hedorah slays the populace with acid sludge, killer mist and poison smoke. What's a terrified city to do? While little Ken is confident his hero Godzilla will come to the rescue, his father has found the one vulnerability in Hedorah which may spell the end of the giant beastie. The plan that Dr. Yano formulates with the the help of the Japanese Army only needs Godzilla's cooperation to work.

Godzilla Vs. Hedorah has its share of problems - it has a lop-sided structure and instantly dated script, while ancillary characters like the two lead groovy teens are used up, then thrown away. Style-wise, it is one of the more striking looking films in the series, with certain segments coming across like a trippy Electric Company episode… it makes me wonder what House auteur Nobuhiko Obayashi could have done with the series. Despite the carnage wrought by Hedorah, the frights are mild and silly enough for younger viewers to enjoy (oddly, the worst - still unsettling - scene came when Hedorah polluted the Yano family's aquarium, resulting in some real-looking fish deaths).

Like Kraken's new DVD edition of Godzilla Vs. Gigan, this version of Godzilla Vs. Hedorah supplies the film with a subtitled Japanese soundtrack, an English dub, and just a theatrical trailer as an extra. The English dub used here is Toho's original dub and not the one made for AIP's original American release of the film (notable for its silly "Save the Earth" song, one of the few things I remembered from that long-ago TV viewing). Probably not all that essential except for the most kitsch-devoted Godzilla fans, but at least it's an affordably priced way to dig Godzilla's grooviest adventure. 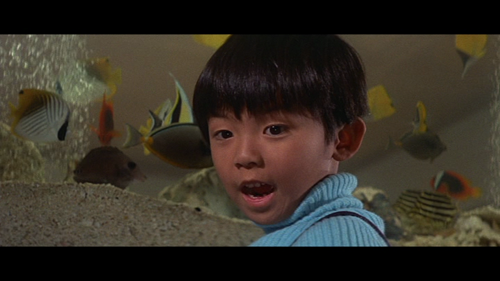 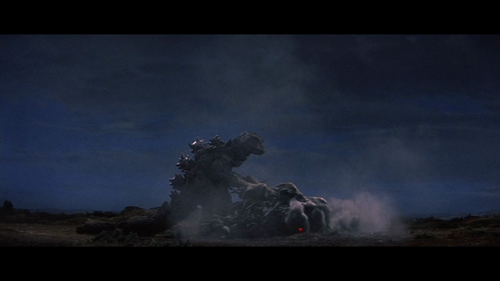 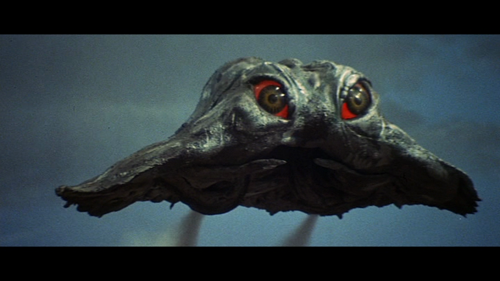 As with their Godzilla on Monster Island/Gozilla Vs. Gigan release, Kraken's Godzilla Vs. Hedorah DVD presents the film in a nice 2.35:1 letterboxed anamorphic format which utilizes a clean source print. While I didn't have Sony's out-of-print 2004 edition of the film on hand to compare, this particular transfer sports a professional-looking image with attractive contrast and good color. Artifacts are kept to a minimum, while the darks are keyed in to a satisfactory level without looking too murky. The psychedelic opening segment looks particularly great on this disc.

The disc comes with either the the original Japanese soundtrack or the English dub originally supplied by Toho for international distribution. While the Japanese track sounds remarkably clean and pleasant, the English dub's muddy, limited dynamics make it a sub-standard track (unlike with the Gigan disc). The musical numbers are not subtitled (gee, but i wanted to know the translation of this "tarzan" thing they're singing of). Optional English subtitles are also provided.

As with the Gigan DVD, the sole extra is the film's two-minute Japanese Trailer with optional English subtitles. For what it's worth, this trailer wasn't included on the 2004 DVD.

He's a mean, green, pollution-fighting machine. While the old AIP English-language dub of 1971's Godzilla Vs Hedorah remains unavailable on DVD, this current bare-bones but nice-looking edition is an affordable way to get re-acquainted with one of the series' wildest, most surreal efforts. See it in the original Japanese, and trip out. Recommended. 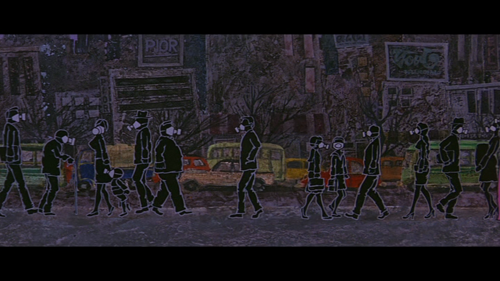 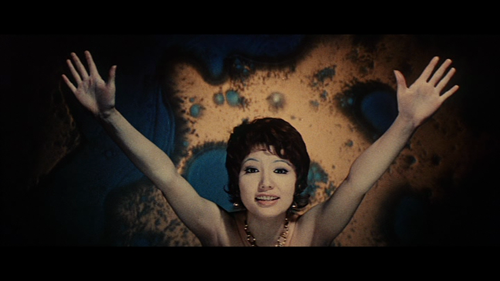 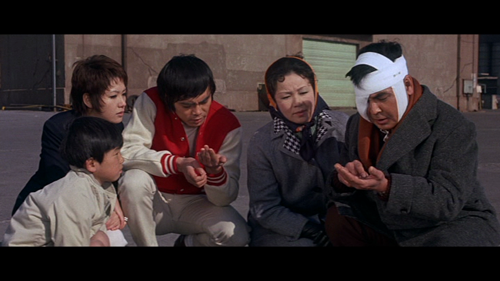