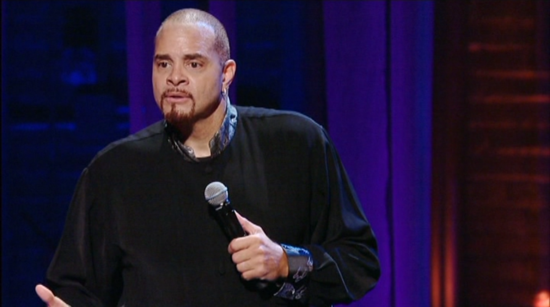 I was quite young when I first saw Sinbad on TV. He was one of the actors on the college-set Cosby Show spin-off, A Different World, which followed Cosby on Thursday nights. I used to watch those two shows back-to-back religiously, which is the only reason I can imagine would have caused my excitement at that time to check out Sinbad's 1990 HBO stand-up special Brain Damaged. I loved Brain Damaged as a ten-year-old, even though much of it went over my head -- especially bits about black culture with which I was unfamiliar, like hair weaves. Sinbad had such an ingratiating style that it didn't matter that I couldn't relate. His stand-up seemed to take the character work of his former boss, Bill Cosby, and juice it up with a younger energy, making it laugh-out-loud funny just to hear Sinbad talk about everyday topics.

After that special, Sinbad's star rose and he appeared in movies and got his own short-lived self-titled TV show. At some point along the way -- maybe because most of his movie roles weren't so hot -- Sinbad started to become a bit of punchline himself. When I just went to Wikipedia to double-check what year Brain Damaged was released, I noticed an odd note in Sinbad's biography: a few years ago, Maxim magazine called him "the worst comedian of all time." Then, trying to Google that article, I came across a handful of other clickbait lists in the same vein, which did not all agree that Sinbad was the worst, but figured he belonged somewhere in the bottom 10 or 12. Actually taking the time to read these articles, I was convinced that most of these writers had probably not even seen Sinbad's stand-up and were just riffing on vague memories of his subpar movies and less-than-chic '90s fashion sense.

Then again, I hadn't seen a Sinbad special in about 25 years, so who was I defend him? So I felt a little cautious upon popping in Make Me Wanna Holla, worried that I might be in for a painful 90 minutes (expanded from the hourlong TV special). And... well... it wasn't so bad. In fact, I laughed out loud plenty of times.

The special starts out with a terrible overlong skit, in which Sinbad imagines a rock 'n' roll, guitar-slinging version of himself with whom he then proceeds to argue for about four straight minutes. Many folks would probably turn the special off right there, but I remembered that the CD version of Brain Damaged (yes, I had my parents buy me the CD too) was full of bad skits like these in between the stand-up, so I just waited it out.

Then, Sinbad comes out in front of a full band with a half-dozen singers, and he plays percussion as the band and singers do a rendition of "Inner City Blues" by Marvin Gaye (the song from which the special takes its name). As much as it feels like a stalling tactic to the home viewer, Make Me Wanna Holla was shot at The Fillmore in Detroit, so I'm sure it didn't hurt to warm up the crowd with a Motown classic.

Once the band leaves, Sinbad finally digs in and seems completely at ease. Being from Michigan, he peppers in local references that kill the theater crowd, but don't always land for a wide audience (and I'm willing to wager these were probably mostly cut from the TV version of the special). But he manages to score laughs with home viewers by giving slightly different spins on a number of tried-and-true topics, like the tensions between men and women, the generation gap, race relations, and even a brief bit about black hair. He occasionally tiptoes up to risky subject matter, like the Trayvon Martin murder and schoolteachers who sleep with their students, but inevitably his punchlines are fairly tame. One section of the show where he mocks vegetarians plays like an echo of previous bits on the subject by Denis Leary and Ron White, but with a less cutting attitude.

More than not being edgy nor all that original -- two things that actually didn't bother me much -- Make Me Wanna Holla suffers most from a feeling of aimlessness, which is exacerbated by the 90-minute runtime. Sinbad is incredibly skilled as a comedian, able to blend plenty of crowdwork, a bit of riffing, and his planned material seamlessly... but he doesn't seem to know how to build a setlist. In fact, rather than figure out a huge laugh to close on, he just brings the band back out for a supposedly humorous musical number comparing nondenominational white churches to black churches. Who needs a big comedy closer, when you can get the crowd on its feet with gospel music?

With all of that in mind, Make Me Wanna Holla might not dissuade the haters, but folks just looking for a few laughs are going to find them here. 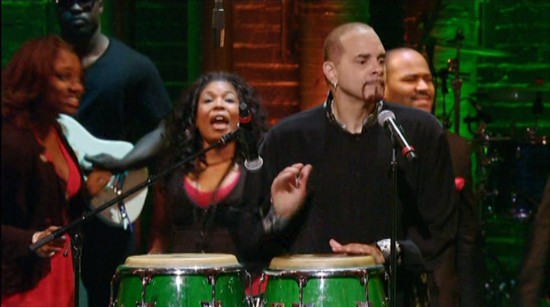 The Video:
The special is presented as widescreen 1.77:1. Even though stand-up doesn't need gorgeous cinematography, Make Me Wanna Holla looks a little low-budget for a Comedy Central special. It's not a throwback to the MiniDV aesthetics of some early-'00s comedy specials (well, the opening skit looks fairly camcorder-y, but that's a different story). Nonetheless, I wouldn't be surprised if it turns out that Sinbad took the portion of the budget most specials put toward renting high-end cameras and gave it to that ginormous band. The image is pretty smeary, with a loss of fine detail in the wider shots. The image is also hampered by aliasing and blocky artifacts. It doesn't really interfere with the comedy (if it did, they wouldn't have simultaneously released it on CD), but this is a long way picture wise from something like Kevin Hart's last stand-up movie.

The Audio:
The Dolby 2.0 stereo audio is encoded at 224 kbps, instead of the typical 192. It doesn't seem all that noticeably clearer, but it doesn't sound bad either. Sinbad's jokes, the audience's laughter, and the pair of musical segments all come through the speakers just fine. On the subtitles side, the disc offers English SDH.

Special Features:
Zero (0, like the scalp of a bald-headed woman whose weave has fallen off).

Final Thoughts:
Even if the subject matter of his material is a little musty, Make Me Wanna Holla shows that Sinbad is actually a skilled comedy craftsman who is sorely underrated. Recommended. 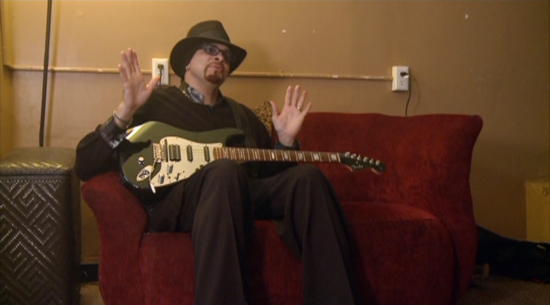