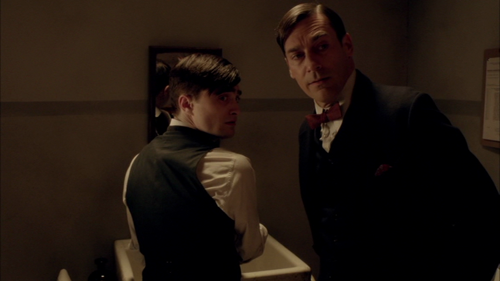 Of all the non-Don Draper roles Jon Hamm could choose for himself, you'd think that of a 1930s drug-addled Russian doctor would be far from the top of the list. Yet, here he is as the lead actor and co-producer of A Young Doctor's Notebook, a four-part BBC series adapted from the autobiographical short stories of writer Mikhail Bulgakov. Hamm and co-star Daniel Radcliffe use this pitch-black comedy to bounce off each other as, respectively, a wistful, damaged older guy and his young, idealistic self trying to make sense of his sorry assignment as the sole doctor in a remote, icy town. Think of it as All Creatures Great and Small with festering boils, mangled limbs and nasty STDs.

A Young Doctor's Notebook strikes an uneasy balance between bleak, episodic comedy and, as Radcliffe states in the DVD's bonus feature, "a cerebral meditation on memory." Opening in 1936 Moscow, Hamm's Dr. Vladimir Bomgard is under scrutiny by the Soviet secret police for writing morphine prescriptions to himself to satisfy his addition to the drug. Clutching a diary, he reflects back to 1917 and being sent to the village of Muryevo to oversee a remote, primitive rural hospital. Despite graduating with a perfect medical school record, the young Vladimir (Radcliffe) quickly realizes that he's out of his depth at his new post. Vladimir slowly, agonizingly gets used to the post's challenges with the help of the other staffers at the tiny hospital - eccentric field doctor Demyan (Adam Goldey), no-nonsense head nurse Anna (Vicki Pepperdine) and Pelageya (Rosie Cavaliero), a plain and somewhat plump junior midwife who eventually becomes Vladimir's lover (more out of a lack of choices than anything else). Day after day, Vladimir treats the ignorant locals of their varied, usually disgusting maladies and attempts to treat them with the hospital's primitive facilities, while the older Vladimir guides his younger self with a sense of resignation as to the pathetic way he'd turn out in later years.

A Young Doctor's Notebook has gotten some praise for its mordant, wicked sense of humor. If anything, they could have gone even darker. Most of the humor is of the simple, gross-out variety (e.g., a botched amputation that goes on forever) or repetitive recurring gags (persistent references to young Vladimir's late predecessor, Leopold Lepoldovitch). The best reason to watch this would be Hamm and Radcliffe's obvious enjoyment with the material and the interesting if one-note supporting cast, although Hamm's awkwardness with doing a faux-British accent sometimes intrudes on the action. There's also the problematic decision of having older and young Vladimir interacting with each other (not in the original Mikhail Bulgakov stories). It's off-putting, and weird. Is older Vladimir attempting to change his past, or did young Vladimir really see himself in the future? The only logical explanation - that the interactions are a result of the elder Vladimir's drugged-up brain - throws everything depicted in the flashback scenes into doubt.

Despite the nice acting and unusual source material, there are still more than a few vaguely unsatisfying things about A Young Doctor's Notebook. One culprit? The four-installment, half-hour format makes it too choppy and episodic to fully enjoy. The stories would have nicely flowed together edited into a feature-length film; as a series, it's absurdly short, leaving a few loose ends at its conclusion. Perhaps Jon Hamm and company found ways to improve it for the second season? 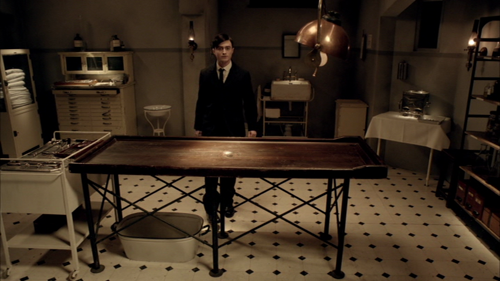 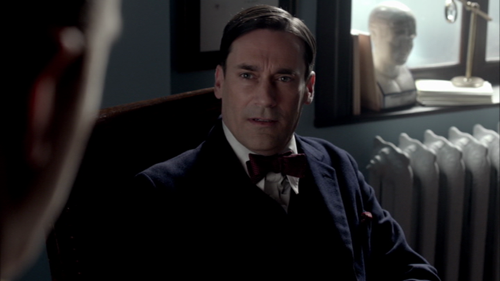 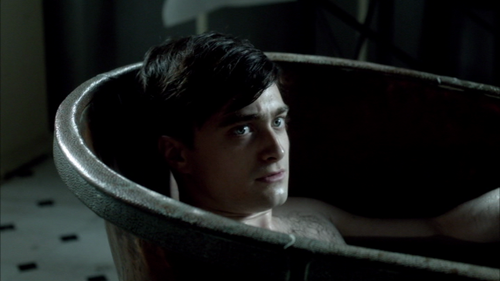 Although the packaging doesn't note it, BBC's Region 1 DVD edition of A Young Doctor's Notebook contains only the four episodes from the series' first season. A second season, yet to be released on disc, aired in 2013.

BBC's DVD edition of A Young Doctor's Notebook sports a good 16:9 anamorphic image which well-captures the photography's grimy textures and wan colors (digitally manipulated to have as little vibrancy as possible). It's dark (of course), but in a way that looks rich and lifelike rather than murky.

The only audio provided is a clean stereo mix; not too showy but with a good balance between dialogue, sound effects and musical scoring. Optional subtitles in English SDH and French are also provided.

A 12-1/2 minute featurette, Behind-The-Scenes of A Young Doctor's Notebook, has Hamm explaining the reasons why he got involved with this project, and Radcliffe talking about his approach to the character and his enthusiasm for the source material. A few promos for other BBC shows play upon disc insertion, but they're not listed on the menu as extras.

Jon Hamm and Daniel Radcliffe seem to enjoy playing the same character at different life stages in the dark 'n twisted four-part BBC production A Young Doctor's Notebook. The brief series winds up strangely lacking and a little bit "meh," although fans of the two stars and morbid humor might want to check it out. Rent It. 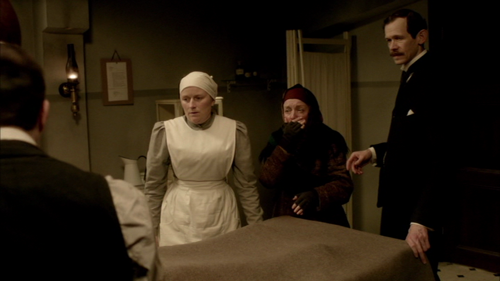 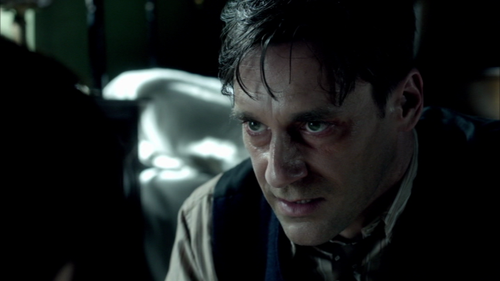