In 10 Words or Less
Do you believe in the after-life? 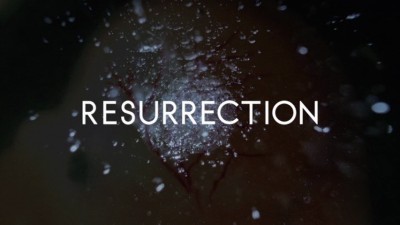 
The Show
As with any new series, the viewer needs to be reeled in and hooked by the first episode for there to be any real fan base. I was excited by the premise of an afterlife storyline. So many dramas nowadays are based around crime and medicine that Resurrection for me seemed like a breath of fresh air to my normal nightly television viewing. If you put Theresa Caputo, drama and the Syfy Channel in a blender, the result might be Resurrection. With a storyline based around residents of small town Arcadia, Missouri,Resurrection, gives the viewer an idea of what it might be like if our dearly-departed "rose again" and returned home. With no recollection of time between their death and when they "returned", you're left wondering what really happened and if they truly died.

As the early episodes unfold many looming questions begin to be answered. As the first of many to eventually "return", Jacob Langston (Landon Gimenez) instantly pull on the heartstrings of viewers. As a young boy who tragically died nearly 30 years ago, along with his Aunt Barbara Langston (April Billingsley) (his presence at first is shocking and devastating to his parents who suffered, mourned and held onto the pain of the loss of their son.) As a mother of a young child, I can't even begin to understand the feeling of grief felt by his parents, Lucille and Henry. The saying "a mother always knows her child" is evident in the reaction we see from Lucille (Frances Fisher) as she first lays eyes on the child she buried. But for Henry (Kurtwood Smith), he is more apt to stand in disbelief that this is "their" Jacob. As the short season moves forward, we see the emotional struggle that Henry goes through, wanting and longing for the "returned" Jacob to be the boy he raised.

From the moment we meet Immigration Agent J. Martin Bellamy (Omar Epps), there's something "special" about him. His compassionate and understanding demeanor, combined with his inquisitive approach to the situation at hand, allow the viewer to relate more easily to his character. As with most dramas, he's got a backstory. I couldn't quite put my finger on it at first, but during the season finale it was quite clear how fate has brought him to Arcadia. With the final moments of the finale ticking by, I was left with my mouth wide open saying, "Whaaaat? No way!" 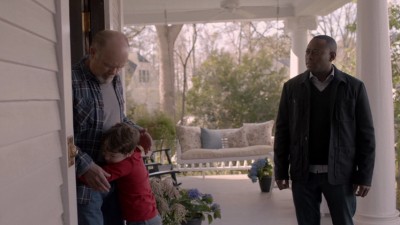 I applaud his vigor and feistiness to get answers. He soon meets Maggie Langston (Devin Kelley), the resident small town family doctor, who happens to be Jacob's cousin. They work together to find answers for Jacob's return, and uncover things that leave them both shaking their heads in disbelief. I enjoyed watching the relationship they share develop.

For Maggie, experiencing the loss of her mother Barbara early in her life has led her to form a strong bond with her father, Fred Langston (Matt Craven), who also happens to be the town's Sheriff. Coincidentally, Jacob and Barbara both passed tragically together. Fred is brash and disbelieving of his nephews recent "return", but secretly holds a torch for his deceased wife. As the season quickly unfolds, both Maggie and Fred will reunite with Barbara, though her return may not be what they expected.

Not all "returns" bring a sweet, mild-mannered past with them, as is the case with Caleb Richards (Sam Hazeldine), who as criminality goes, robbed the local bank for which his daughter Elaine (Samaire Armstrong) works at just before his untimely death. His character definitely gives Marty and Sheriff Langston a run for their money, placing fear on those close to him and a sense of uncertainty to what the "returned" Caleb is capable of.

As the childhood best friend of Jacob, Pastor Tom Hale (Mark Hildreth) is cautious to open his heart and mind to the idea that Jacob is the same young boy he grew up with. That is, until Rachael Braidwood (Kathleen Munroe), his fiance as we later learn, also returns to Acadia. With the events that follow Rachael's reincarnation, the town's people and congregants of Pastor Tom's church are in an upheaval and want answers. Sadly, Pastor Tom doesn't have the answers the "non-believers" are looking for and what ensues is rather expected, to an extent. There is though something about Rachael I just don't like. I don't know what it is, but something about her character just irks me to no end.

There is a supporting cast of non-believers led by aggressive, belligerent Gary Humphrey (Kevin Sizemore) and nosey, stab-you-in-the-back Helen Edgerton (Victoria Cartwright), standing in opposition of Pastor Tom, the "returned" and their close family members takes place. It was probably inevitable, as you're not likely to see small towns across America sitting idly by as those departed come back again...and, well you'll have to watch the show to get the full picture.

I'm normally not one to be left sitting asking, "Whaaat?", but to my surprise, I found myself in this situation more than once this season. Because of the short duration of this series, the storyline took a rollercoaster progression from start to finish and I was happy to join along on the journey. There is still so many questions to be answered and I'm sure the writers have more to reveal in coming season as more and more continue to "return". I can't wait to see where this series goes from here on out! 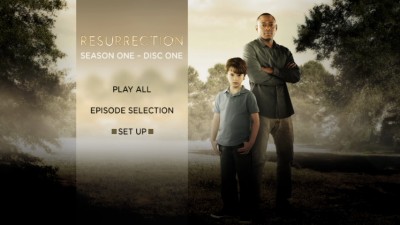 The DVDs
Shipped in a slipcover, the eight episodes in this collection arrive on 2 DVDs in a clear, single-hubbed keep case (with a tray for the second disc), with episode information on the reverse of the cover art. The discs feature static anamorphic widescreen menus with options to play all the episodes, select a show, adjust the set-up and check out bonus features. There are no Audio options, but subtitles are available in English SDH, French and Spanish.

The Quality
With a storyline that may seem rather dark or usual, these episodes look great in their anamorphic widescreen transfers, with a muted palette of colors and a sharp image. It's not the HD presentation seen on TV, but it does the trick, showing off the show's quality filmmaking, without any problems in the image.

The Dolby Digital 5.1 tracks on this set do a nice job of reproducing the way the show sounds when it airs, with the dialogue sounding clear from the front of the room, while the surround speakers have plenty of action, with sound effects and music filling the sides and rear.

The Extras
This collection included a small assortment of extras. In all honesty, they were just ok, nothing to write home about. Just there.

There are three deleted scenes (6:37) in this set with the indicated episode (a play-all option is included.) These deleted scenes were ok, but in some shape or form, portions were included in the final episode cut. They range from 57 seconds to 3:52.

This set included bBloopers (2:33) which was more tiresome to watch than funny. A missed line here, a flub of a prop there, the occasional train whistle in the background, that about sums up the bloopers. If you didn't watch them, you wouldn't miss them.

"On Location in Georgia" (3:14) was a nice addition to the bonus features as the cast and crew discussed what it was like taking the entire season on location in one place. With the storyline set in Missouri, being on location in Georgia was optimal in providing different landscape settings. There are conference centers and skyscrapers, rolling plains and picturesque hidden wilderness with rippling streams--anything and everything needed to portray life in Arcadia.

It was enjoyable to hear the cast's perspective on what it was like to be a part of Resurrection in "Resurrection: Building a Mystery" (3:02). Not everyone is a believer in the after-life, but it was evident that the cast and crew really delved deep to give a true depiction on what's going on in their small town. With such a short season, the cast bonded quickly and that relationship dynamic is what made it all so believable. 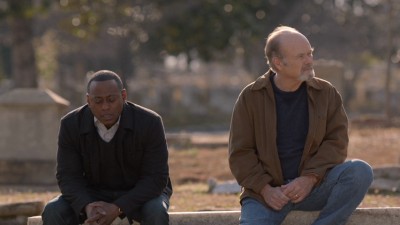 The Bottom Line
It's known by many in my family that I believe in the afterlife, another dimension where the souls of our dearly departed go until we all meet again. Spirits are all around us in some form or another. I'm not saying I believe all my passed uncles are sitting around playing poker or my Aunt Anna is knitting a sweater, but I do think they hear us and see us. Now, if tomorrow I go to Target and my Grandmother who passed 33 years ago walks in, I'm not really sure what I would say or do. The overwhelming feeling to embrace them for who they were or in regards to the "returned", who they are in the present, is a struggle. Can you get close to and put aside the fact that they died, were buried/cremated, and have now returned in their former state? Many might assume these "returned" are aliens, as is the case with some of the residents of Arcadia. The opinion is in the eye of the viewer. "Could it ever happen?" is a question you might ask yourself after watching this season. I know I'm eagerly awaiting the show's return this fall and can't imagine the journey the writers and cast will take us on. With just eight episodes, this set goes by fast, and the brief extras don't add any real value, making it a questionable purchase, except for the most die-hard fans. If you haven't seen the show and enjoy a bit of supernatural drama, it's worth a look.