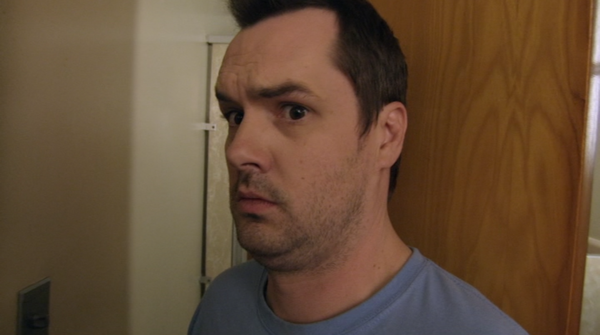 Onstage, Jim Jefferies is a bit of a dark-hearted boor. His stand-up comedy is a blend of Denis Leary's bitchy disregard for political correctness (and fondness for leather jackets), Joe Rogan's dude-brah brashness, and Dave Attell's lovable drunken skeeviness, all spewed out through an Australian accent. His most recent stand-up special, Fully Functional, climaxes with a long reminiscence about being at a comedy festival, witnessing his roommate attempt to rape two teenage comedy fans, and him managing to "turn it around" by having unsatisfying, coked-up sex with one of the girls while the other one cries in the bathroom. It's not exactly the kind of stuff that screams "Sitcom Deal!" Yet, Legit, the cable sitcom Jefferies co-writes and stars in, is an irreverent crowd-pleaser that pretty much manages to stay true to its creator's stand-up persona while also giving the audience characters in which they can invest emotionally.

The initial concept of the show, as presented in the pilot episode, is that Jim Jefferies (the character) feels that he's still not "legitimate," despite his success in the American comedy scene. His longtime friend and divorced roommate Steve (Dan Bakkedahl) suggests maybe he should start doing nice things for other people. When Steve's brother Billy (DJ Qualls), who is bed-ridden with muscular dystrophy, admits that he has never had sex, suddenly Jim has a good deed that he is eagerly willing to do. He and Steve stick Billy's motorized wheelchair into the back of a minivan, and off they go to the land of legalized prostitution, Las Vegas.

This first road trip introduces what will be their dynamic throughout: Jim pushes each situation a bit too far, but usually does it in service of his own (sometimes twisted) moral code; Steve tries to mediate and keep the peace, though that often involves just going along with whatever Jim suggests; and Billy alternately transcends his physical disability or uses it to his advantage, to get people to underestimate or immediately sympathize with him. They are overgrown teenagers in the Todd Phillips mold, meaning they are as likely to pull pranks and put each other down as they are to stick their necks out for each other. They're familiar comic types, but this season's scripts, by Jefferies, series director Peter O'Fallon (The Riches, Suicide Kings), and Rick Cleveland, fill them out with three dimensions. Laughs are as likely to come from character-based moments as they are from tasteless quips or physical comedy. One of my favorite episodes of this season, "Love," features a touching Skype-based love story for Billy and a show-stopping gross-out gag involving Jim stroking Billy's genitals. 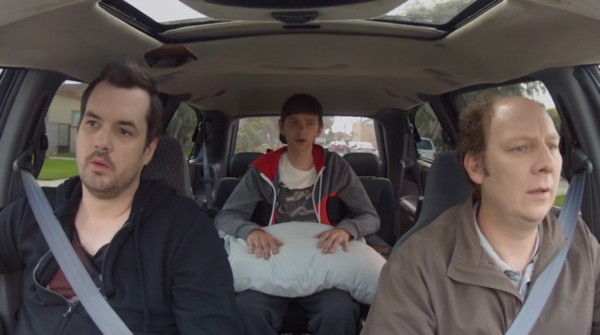 As the season goes on, the thread about Jefferies doing good to overcome his self-involvement pretty much dissipates, in favor of a more ensemble-based approach to the comedy. Billy gets kicked out of his care facility and moves in with Jim and Steve. In addition to some one-night-stands and Jim's on-again, off-again girlfriend Peggy (Ginger Gonzaga), the guys' apartment is also frequently visited by Billy's sassy nurse Ramona (Sonya Eddy), Billy and Steve's hoarder mom Janice (Mindy Sterling, aka Frau Farbissina from the Austin Powers movies), and the guys' mentally challenged friend Rodney (Nick Daley).

Legit incorporates a number of supporting actors who are physically and/or mentally handicapped. The show manages neither to ignore their disabilities nor to use them simply as fodder for cheap laughs. Often these characters get some of the best quips and comic reactions, particularly in an episode called "Cuckoo's Nest" that is set almost entirely at Billy's old care facility. Admittedly, the title of that episode isn't the most culturally sensitive choice, but it echoes the pervasive inappropriateness of Jefferies' character.

Episodes are dotted with noteworthy appearances by folks like Verne Troyer, Andy Dick, Marlon Wayans, Twin Peaks' Kimmy Robertson, Rachel Blanchard (TV's Clueless, Flight of the Conchords), and stand-ups Brad Williams and Lachlan Peterson. John Ratzenberger plays Billy and Steve's dad Walter and only appears in two episodes of the first season (replacing the actor who played the role in the pilot), but he is definitely the show's secret weapon, coaxing unexpected laughs out of left-field riffs and off-kilter characterizations.

There is one major element that bugs me about this otherwise very good show. Legit has decided to eschew the Seinfeld / Louie conceit of showing the main character performing thematically related stand-up material onstage. Instead, the episodes frequently have Jefferies shoehorning stand-up bits into scenes, as though they were conversation. They're not. They're stand-up bits. The most frustrating example of this for me is the episode "Anger," which is basically just one of Jefferies' bits from Fully Functional stretched out to episode length.

That quibble aside, I am happy to report that Legit is an exceptionally funny show with characters I look forward to revisiting in future seasons. 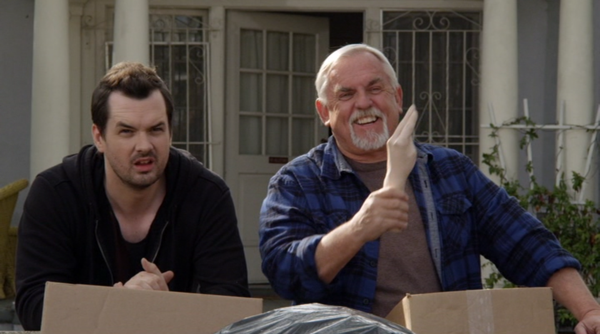 The DVDs
The show's 13 episodes and bonus features are presented across 2 DVDs.

The Video:
I watched some of these episodes on my laptop and some on a big screen. The 1.77:1 widescreen image was much better served on the smaller screen. On a big screen, the show's look was a little distracting: soft and occasionally noisy -- both from moments shot in low light and a bit from DVD compression as well. This less-than-polished look serves the tone of the show well, however, as does the realistic and often muted color palette.

The Audio:
Season one of Legit comes with Dolby Digital 5.1 surround audio, which comes into play mostly during the source music cues. Otherwise, the surround speakers mostly just feature atmospheric sound effects. It's a sitcom, so the main focus is on the talk in the front channels, and that comes through crisp and clear. The disc features English SDH, plus Spanish and French subtitles.


Final Thoughts:
The show strikes a tricky balance by painting its characters as offensive or sympathetic... or both. Inevitably, sometimes the show's creators overcorrect by going either too dark or too sentimental, but fortunately it never totally derails the comedy. In the end, Legit is a messy, crazily funny show. Highly Recommended. 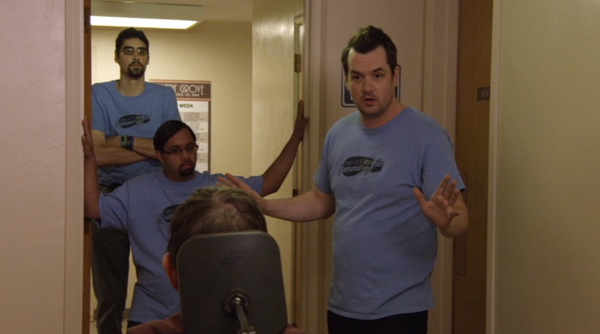