Redemption Films // Unrated // June 17, 2014
List Price: $24.95 [Buy now and save at Amazon]
Review by Stuart Galbraith IV | posted June 11, 2014 | E-mail the Author
British Director Pete Walker (b. 1939) is remembered today primarily for the sadistic horror movies he made during the 1970s, during and after once-thriving companies like Hammer, Tigon, and Amicus had all but stopped making slightly more classical pictures. Walker's, with titles like Die Screaming, Marianne (1971), House of Whipcord (1974), House of Mortal Sin (1976), and Schizo (1976), were famously sleazy despite some obvious intelligence behind them.

It comes as a surprise then that, despite a title suggestive of the sexploitation films Walker made earlier in his career, Home Before Midnight (1978) is in fact a fairly serious, even ambitious drama, though it does make some concessions to the marketplace as it features a few gratuitous sex scenes and a fair amount of female nudity.

Mostly though, Home Before Midnight is an interesting, engrossing film taking the persuasive if nowadays politically-incorrect position that it's possible for a man to be innocent of charges of rape in the nonconsensual sense while guilty of the statutory kind.

Kino-Lorber's Blu-ray offers a fine, almost pristine presentation of the film, and includes a concise but informative on-camera interview with the director. 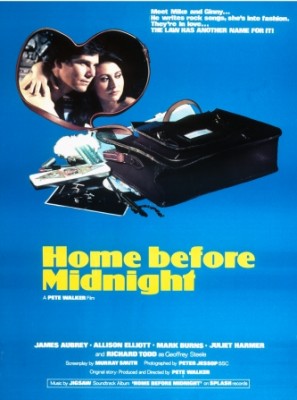 Pop songwriter Mike Beresford (James Aubrey, who debuted in films playing Ralph in the 1963 Lord of the Flies) innocently picks up hitchhiker Ginny Wilshire (Alison Elliot, not the same-named American actress of recent years), who with friend Carol (Debbie Linden) had flirtatiously been thumbing their way home from Nottingham to Wimbledon. Carol, in fact, has already dumped Ginny after encountering a truck driver further up the road.

But Mike and Ginny genuinely fall for one another, and are soon spending all their free time together. Mike introduces Ginny to his parents, as well as his circle of friends and professional collaborators, including the band with which he's primarily associated, Bad Accident (Jigsaw). In a clever bit of casting, lending authenticity to this milieu, the band's front man is played by Chris Jagger, Mick's lookalike (at the time) younger brother.

However, while sailing with a sunbathing Ginny, Mike discovers an engraved bracelet, the writing on it unequivocally dating her at just 14 years old, meaning that, under British law, 28-year-old Mike has unwittingly been committing statutory rape. He insists they must break-up at once but, their feelings being what they are, he later agrees to continue the relationship. Soon, however, Ginny's outraged parents (Mark Burns and Juliet Harmer), hearing the band let Ginny's name slip during a TV interview and finding birth control pills in her bedroom, call in the police.

The biggest criticism levied against Home Before Midnight is that actress Alison Elliott in no way resembles a 14-year-old girl, rather looking like a young woman in her early 20s. Admittedly, Ginny is supposed to look older than her years, but neither is she believable as a pre-legal teenager, despite attempts to make her look younger in some scenes (appearing in court without makeup, wearing a school uniform, for example). Walker, in that on-camera interview, says actress Elliott, who seems to have dropped even from the Internet radar, was 17 going on 18 at the time filming. (Debbie Linden was 17.)

And though Elliott's looks strain credibility a bit, the rest of the picture is surprisingly logical and reasonable. Ginny deliberately withholds her true age from Mike until well into their relationship, and her behavior, including accepting drinks from him at pubs and nightclubs, gave him every reason to believe she was at least 16. (In the U.K. 18 is the minimum age for purchasing alcohol, though 16-17 year olds can consume it in such establishments under certain conditions.)

Mike does knowingly break the law in allowing the relationship to continue after learning Ginny's true age, but when discovered Ginny, on veiled threats of being "taken into care," too easily allows herself to be manipulated by her parents, teachers, and police investigators, all of whom are anxious to place all blame on Mike, prompting Ginny to provide false testimony of an nonconsensual sexual assault.

Interesting subtexts run throughout the film, some easily missed by American viewers unfamiliar with the Britain's educational class system as it existed then.* Ginny attends an elite private high school, with the teachers there more eager to protect the school's reputation than get at the truth. (One even deliberately ignores Ginny's admission.) Her would-be hipster parents are clueless hypocrites and naïve to boot: her father pats Ginny and Carol on the butt, making inappropriate remarks, for instance, while both parents initially all but encourage their 14-year-old to hang out with Mike and the popular rock band (suggestive of The Rolling Stones, no less) he writes for, on the assumption that the two are "just friends," and that she won't be exposed to all of the music industry's vices. During the trial (featuring Richard Todd as Mike's barrister) various authority figures freely admit their children engage in similar and even more promiscuous behavior while Mike's music friends, who themselves have underage sex with various groupies (they never ask the girls' ages) sever their guilt-by-association relationship from Mike fearing a public backlash, and thus impact their personal economies.

Shot for 1.66:1 exhibition, Home Before Midnight gets a strong 1080p transfer, with most of the film looking pristine, sharp, and with accurate color; only the title elements are a bit dirty. The original mono audio, here 2.0 LPCM, is fine, if unsupported by English subtitles. The disc is Region "A" encoded.

Supplements include a 10-minute interview with Walker, who assesses the film forthrightly and shares his opinions about the cast (including Debbie Linden, who died too young of a heroin overdose) and cameraman Peter Jessop. A full-frame trailer is included, along with trailers for other, mostly horror, Pete Walker titles.

The film is similar to the slightly better All the Right Noises (1971), with Olivia Hussey (then about 20, and quite believable as a teenager), but on its own terms Home Before Midnight logically presents its conflict with equally logical consequences. Highly Recommended.


* Reader Sergei Hasenecz disputes this, however. "After Penn State, not many Americans are going to miss this. In fact, I don't see how anything you mention in this paragraph will slip by American viewers. Ever heard of Michael Jackson? Roman Polanski?"