Image // Unrated // June 10, 2014
List Price: $34.97 [Buy now and save at Amazon]
Review by Stuart Galbraith IV | posted July 20, 2014 | E-mail the Author
I don't review a lot of (relatively) new movies, but was drawn to Devil's Knot (2013) because its director is Atom Egoyan, the Canadian filmmaker behind such excellent and unique films as Exotica (1994), The Sweet Hereafter (1997), and Ararat (2002). Devil's Knot, adapted from Mara Leveritt's 2002 book and based on the West Memphis Three murder investigation and subsequent trial, apparently is Egoyan's first "Hollywood" (i.e., American-financed) feature.

It was not a success. After premiering at the Toronto Film Festival last September, the film had only a limited theatrical release in Canada and none at all in the United States, despite comparatively big-name stars like Reese Witherspoon and Colin Firth. Instead, Devil's Knot went directly to video-on-demand in May and was met with overwhelmingly negative reviews.

Most of the criticism stems from the fact that this true story has already been covered by no less than four highly regarded documentaries: Paradise Lost: The Child Murders at Robin Hood Hills (1996) and its two follow-ups (Paradise Lost 2: Revelations and Paradise Lost 3: Purgatory); and West of Memphis (2012). Devil's Knot, critics argued, adds no new insight into this tragic story, which is generally true. The movie is also far more conventional than Egoyan's best work. There are some similarities between this and The Sweet Hereafter, in every way a superior film.

And yet Devil's Knot isn't at all bad in and of itself. It's polished, compelling, and intelligent, and it hints at concerns present in many of Egoyan's other movies, so neither is it really a failure, just disappointingly workmanlike considering the talent involved.

Image Entertainment's Blu-ray has good picture and sound, and some okay extra features. 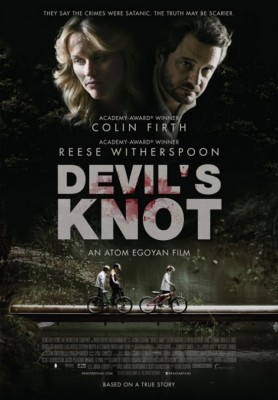 One of the problems with the film is that in sticking to the historical facts of the case it introduces myriad characters and situations while lacking any clear focus. On May 5, 1993 in West Memphis, Arkansas, three eight-year-old boys go missing in a forest adjacent to a lower-middle class neighborhood. The next day their naked and mutilated bodes are discovered in a creek. In a rush to judgment, three teenagers - 18-year-old Damien Echols (James Hamrick), 16-year-old Jason Baldwin (Seth Meriwether), and 17-year-old Jessie Misskelley (Kristopher Higgins) - are arrested and charged with murdering the boys, supposedly as part of a satanic ritual.

The movie focuses primarily on the grieving process of Pamela Hobbs (Witherspoon), the mother of one of the victims, and the growing doubts shared by her and private investigator Ron Lax (Firth), who opposes the capital punishment the boys likely face and who offers his services pro bono to their defense team. Meanwhile, the conservative Christian community, local police and prosecutors, desperately seeking a quick resolution to the case, readily accept unsubstantiated and occasionally outrageous accusations that the three accused boys engaged in satanic rituals culminating with human sacrifice. Lax and, later, Pam, aren't so sure.

Despite all the harsh reviews, Devil's Knot has its share of strengths, mainly when it echoes the kinds of interests that turn up in Atom Egoyan's other films, notably The Sweet Hereafter. That film was about a small community trying to come to grips with the worst sort of tragedy: a school bus full of children died in an icy lake and the story follows the efforts of a gung-ho attorney (Ian Holm) trying to convince the parents to file a class action lawsuit. The point of that film seemed to be that occasionally a terrible tragedy is simply unexplainable, that in grieving we look for answers when, sometimes, there just aren't any.

Devil's Knot works best when treading along similar lines. As in the real West Memphis Three case, it becomes clear that while no compelling evidence actually puts the three teenagers at the crime scene, other more plausible evidence links the crime to other suspects. Notably there are two suspicious teenagers who seemingly fled to California after the bodies were discovered, and who subsequently failed polygraph examinations; and a mentally-disoriented, never-identified man nicknamed "Mr. Bojangles." He was seen wandering into a restaurant bleeding and reportedly was covered in mud up to his knees.

By the end of the film Pam Hobbs even begins to suspect her husband, Terry (Alessandro Nivola), stepfather to Pam's murdered boy, when she finds the boy's beloved pocketknife apparently hidden away in the attic by Terry. But, ultimately, Pam and Lax are far more convinced that the three teenagers are innocent than any one suspect is guilty.

Devil's Knot thankfully avoids regional and economical stereotypes, and is largely non-judgmental, condemning the botched investigation and egregiously unfair trial particulars but avoiding the temptation to turn incompetent investigators, prejudiced judges and others so sure of the boys' guilt into villains. Like the still-unsolved real-life case, Devil's Knot is left unresolved, with few definitive answers offered.

But the movie might have worked better in a longer form. The recent seven-hour British series Broadchurch, dealing with most of the same issues, exemplifies this. Or maybe the screenplay should have focused exclusively on Witherspoon's or Firth's character instead of trying to cover both equally. The film's epilogue links the two characters in a reasonably satisfying manner, but Devil's Knot never quite lives up to its potential.

I was surprised to learn that Devil's Knot, shot on high-def video (ProRes 4444), was exhibited theatrically in ‘scope format, 2.35:1, while the Blu-ray is 1.78:1 full frame. Obviously, unlike the panning-and-scanning of CinemaScope movies photographed in 35mm, the viewer is actually seeing more picture information, not less. The compositions seemed fine to my eyes. I didn't notice any excess headroom in shots so I assume this was protected for both aspect ratios. The image is up to contemporary standards though unremarkable. The 5.1 DTS-HD Master Audio fairs somewhat better, with Mychael Danna's ominous and memorable score coming off quite well. English and Spanish subtitles are offered.

Far from great but intelligent, compelling, and hardly terrible, Devil's Knot isn't nearly as good as director Atom Egoyan's best films, but it's not bad, either. Mildly Recommended.