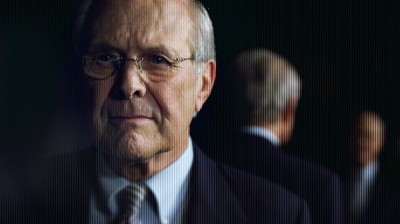 It's a fairly common joke, almost a parlour game, to fantasize about what you might do with a time machine. Standard answers are to kill Hitler or view some historic event, maybe revisit a favorite memory. After watching Errol Morris' documentary about Donald Rumsfekd, The Unknown Known, I think I'd go hang with a post-1984 George Orwell and show him this movie. It might actually blow his mind a little too much to realize how prescient he really was.

I say this because a major component of 1984 was how language would eventually be manipulated to the point where it lost all meaning. Rumsfeld does this in a lot of ways, though it's arguable how much he does this for the purpose of pulling the wool over the eyes of the public and how much he does it to convince himself of his own rightness. As you watch him submit to Morris' questions for 90 minutes (or 33 hours, as it were), you realize that the former Secretary of Defense under Bush and career politician since the 1960s loves seeking out the definition of words so he might use them for his own purposes. He's also extremely impressed by his own turns of phrase. The title of the documentary comes from one of his most Orwellian memos. As the actual document explains, the original intention was to say the unknown knowns were things we think we know but realize we don't; as Rumsfeld remembers it, it's the things we don't realize we know even more about than we think.

Which is a pretty astonishing distinction when you consider it. Here is the man who helped sell the false report of weapons of mass destruction in Iraq, amongst other acts of hubris and injustice, rewriting his own history to suggest his mistakes were actually victories lying in wait. Very early on in The Unknown Known, Rumsfeld basically tells us how he doesn't really believe in hindsight. It's easier to look back, he suggests, and see what could have been, but he puts no stock in doing so as a means to correct one's next move or to learn how to be better. Like many in the Bush administration, he's content that history will prove him to be as right as he believes himself to be. No matter that you don't understand him in the here and now. His riddles and homilies are designed to confuse you!

And they clearly confuse Morris. Or maybe "bemuse" is the better word. The director's disbelief is evident in the tone of his voice as he asks his off-screen questions. The majority of The Unknown Known is Rumsfeld talking to Morris' trademark camera set-up, facing it dead on, looking the audience square in the eyes. Though the director cuts away to infographics, photos, and stock footage, the real movie here is Rumsfeld one-on-one. The posters defiantly ask, "Why is this man smiling?" It's an accurate prediction of what you may find yourself asking while watching The Unknown Known. His is a charismatic grin, but boy, does it emerge at weird times!

The Unknown Known is a sort of companion piece to Morris' Oscar-winning 2003 documentary The Fog of War. In that movie, Robert S. McNamara, one of the architects of the Vietnam War, takes us through his history and his thought processes and acknowledges his very real mistakes. He is a man capable of reflection who has to live with the consequences of his decisions. By contrast, Rumsfeld comes off as a man ruled by caprice, subject to his whims without ever wondering why he had them. And that, when it comes down to it, is all the more unsettling. Rumsfeld could just as easily be the boogey man in a horror franchise as he is the subject of a truly compelling nonfiction feature.