Warner Archive // Unrated // April 1, 2014
List Price: $19.98 [Buy now and save at Wbshop]
Review by Stuart Galbraith IV | posted April 10, 2014 | E-mail the Author
Forget Gone With the Wind (1939). Universal's 1936 version of the landmark Jerome Kern-Oscar Hammerstein II musical, directed by James Whale and adapted from Edna Ferber's novel, is the superior epic of the Old South. It's a far richer, more emotionally authentic and racially honest portrait years ahead of its time, with superb music, excellent performances and all handsomely produced. Too well-produced, as it turns out; its $1 million cost, nearly 10 times the budget of the usual Universal film, all but bankrupt the studio and led to the ouster of founder Carl Laemmle and his son, despite the film's immense critical success and popularity.

The picture is almost universally regarded as by far the best of the three film versions. A 1929 film was, perversely in retrospect, mostly a silent film with a sound prologue, and for that reason produced more as an adaptation of the novel than the 1927 Ziegfeld-produced Broadway show. MGM, anxious to produce its own film version (initially conceived as a vehicle for Jeanette MacDonald and Nelson Eddy) bought out Universal's interests, including all rights to the 1936 film, sometime in the forties. Acrimony toward outspoken African-American communist sympathizer Paul Robeson, playing Joe and famously singing "Ol' Man River," probably contributed to the movie's lack of wide circulation until the 1980s and a subsequent laserdisc release by Criterion in 1989.

But MGM's version, finally released in 1951 and starring Kathryn Grayson, Ava Gardner, and Howard Keel, was despite its box office success vastly inferior and much less faithful than the 1936 version. Many of its daring, adult themes were sanitized or jettisoned altogether. It did expand the role of tragic, biracial Julie, but that was more to beef up Ava Gardner's role, a part singer Lena Horne could-a should-a played.

It's a movie that truly deserves Criterion-level treatment and a Blu-ray release at the very least, but for now Warner Bros. is offering Show Boat as a no-frills Archive Collection release. At least it's a real DVD, and not a DVD-R. 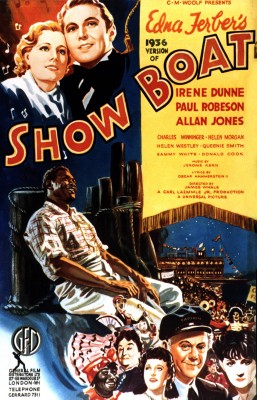 Unlike MGM's version, the 1936 Show Boat, like the original musical, spans four decades. In 1887, Magnolia "Nola" Hawks (Irene Dunne) is an 18-year-old girl living aboard the Cotton Palace, a show boat operated by her father and mother, Cap'n Andy (Charles Winniger) and Parthy (Helen Westley). Docking in Natchez, Mississippi, the Cotton Palace is met by crowds anxious to see the show and its leading lady, Julie La Verne (Helen Morgan), in particular.

However, following a fight between Julie's hot-headed husband, Steve (Donald Cook), and an engineer, Pete (Arthur Hohl), the latter reports to the local sheriff (Charles Middleton) Julie's secret: she's mulatto with a black mother and passing herself off as white. Violating local miscegenation laws, the sheriff threatens to arrest the couple, but in front of Magnolia, Cap'n Andy, ship's cook Queenie (Hattie McDaniel) and her husband, Joe (Paul Robeson), Steve bravely cuts Julie's hand and swallows some of her blood so that he can truthfully state that he has "black blood" in him, too. Satisfied, the sheriff leaves but in the racist South Julie and Steve can no longer perform onstage with the all-white cast.

Meanwhile, Magnolia falls hopelessly in love with a suave riverboat gambler, Gaylord Ravenal (Allan Jones). Cap'n Andy persuades talented singer Gaylord to replace Steve as the company's leading man, with Magnolia taking over as its leading lady, despite strong opposition to both ideas from Nola's mother.

Mainly, Show Boat parallels the tragic romances and contrasting fates of Magnolia and Julie, strong women almost cursed by their devotion to unworthy men (despite Steve's gesture, he eventually leaves the alcoholic Julie, while Gaylord's gambling addiction wrecks his marriage to Magnolia). The unflinchingly dark nature of Show Boat, with its often ironically upbeat musical numbers, was unusual and quite groundbreaking. That torch singer Helen Morgan was herself an alcoholic who would die of the disease less than five years after the film's release adds to its poignancy.

Show Boat was the first racially integrated stage musical, and the first to seriously tackle the issue of interracial marriage, though Helen Morgan (like much of the 1936 film's cast, also in the 1927 production) herself was white. The black characters, while working as cooks, janitors, and the like, as they would have been in 1880s-1930s America, are portrayed respectfully and as fully fleshed-out characters. Though McDaniel plays a similar character in Gone With the Wind the differences are subtle yet striking: In Show Boat she's her own woman and no demeaning servant loyal and completely subservient to former slave owners. Nor are her songs, nor any of those sung by black characters, "coon songs," but rather expressions about relationships with the same adult perspective as those sung by the white characters. The occasional irony of the black-sung songs has often been misinterpreted as perpetuating racial stereotypes. No matter that the lyrics were written by a white man; "Ol' Man River" in just 24 lines succinctly expresses black suffering so profoundly it's no wonder many wrongly assume it to be a 19th century Negro spiritual.

Despite nagging controversy that continues to the present day, Show Boat's adult themes all but demand another movie remake, one more authentically period and even more honest and forthright in dealing with its racial aspects.

Producer Carl Laemmle Jr.'s obsession to remain faithful to the original production extended to the casting, with Morgan, Winninger, and Sammy White (as specialty dancer Frank Schultz) all from the original production. Irene Dunne had played Magnolia in the original touring show, while Robeson debuted as Joe in the 1928 London production, though the part was originally conceived with him in mind.

Except for Jones, a better singer than a believable rogue, the cast is excellent, superb in the cases of Morgan and Robeson. British director James Whale (Journey's End, Bride of Frankenstein) gives the lavish production a fluidity surprising for a 1936 musical adaptation of a 1927 show (as opposed to Busby Berkeley's original movie musicals at Warner Bros.), with much clever editing and camera movement.

The 113-minute film, in black-and-white and 1.37:1 standard size, looks quite good, comparable to other Universal titles of the middle 1930s. The Dolby Digital mono audio is equally fine. There are no alternate audio or subtitle options, and no Extra Features, just a "Play Movie" option on the menu screen. (Thankfully however, Warner Bros. has been very generous with the chapter stops, of which there are many.)

Though certainly deserving of an extras-crammed special edition release on Blu-ray, even on DVD, this Show Boat is such a landmark film, one still quite emotionally powerful, adult, and captivating it just has to be seen. A DVD Talk Collector Series title.