Adjust Your Tracking: The Untold Story Of The VHS Collector 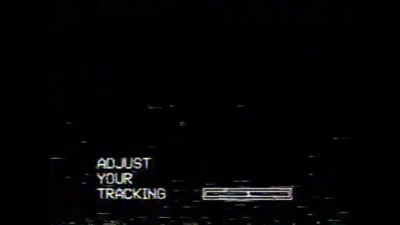 
The Movie
The latest in a somewhat recent run of nostalgia-driven looks back at the VHS era, Adjust Your Tracking has a somewhat narrower focus when compared to the others, zeroing in on the passionate collectors who have kept those black bricks of physical media even moderately relevant in a digital download world. Interviews with people who have VHS collections numbering in the thousands, punctuated with old related clips and commercials, reveal what drives them to hunt out and buy movies on media that can't compare in quality to more modern options.

After a brief introduction to the idea of VHS, and some notes on Blockbuster Video's role in the destruction of the rental industry, the film goes deep into the world of collectors, talking with video store owners and industry experts, and especially the very collectors themselves. Through these interviews, the film delves into topics like how to hunt for VHS, how to organize a collection and even favorite distribution company logos, along with the tale of one of the most valuable VHS tapes ever, the virtually unknown Tales from the Quadead Zone. The people all seem like perfectly harmless fans who devote their energy to a relic of the past, but when the cause is maintaining ownership when companies seem more interested in renting content to us and taking it back when they want to, it's easy to side with them in the fight. 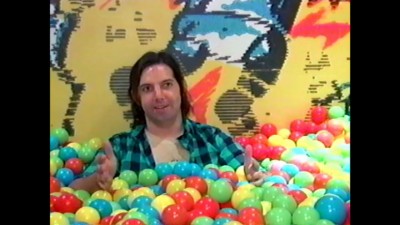 Then you meet the spotlight collectors, who have their own standalone segments. Every area of collecting has its diehards, and VHS is no exception, but for some reason, the ones profiled here are...different. When one fellow, who sartorially seems to be as stuck in the '80s as his hobby, reveals how he's turned his basement into an era-appropriate video store, complete with a beta display and porn (in both formats) behind the counter, it goes from fun to weird. There's nothing wrong with nostalgia, but you have to live in today's world while you enjoy it or things probably won't go well in the long run.

Every film has to stand on its own, and it's not entirely fair to compare one to another, but when you share topics (and even several participants in the interviews, like Zack Carlson (Destroy All Movies!!!), Dimitri Simakis (Everything is Terrible) and Paul "Dormarth" Mallack)), the way this documentary does with Rewind This, comparisons are inevitable. The latter is more wide-reaching and polished, whereas this film is more like a zine (complete with some crudely-drawn, yet tone-appropriate comic art that helps tell some of the film's more interesting stories.) That's probably the best way to appropriately view the two films. This is the on-the-ground oral history of collecting, a story of obsession and the way it brings people together, rather than a history of of an era. 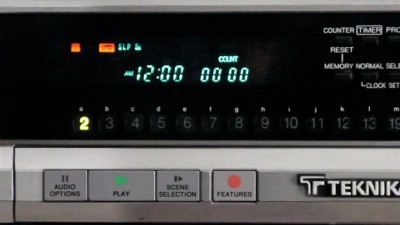 The DVD
Adjust Your Tracking comes in a two-disc set, packed in a standard-width keepcase with an insert and a tray for the second disc. The main disc has an amusing animated VCR motif, with options to watch the film, select scenes, adjust the set-up and check out the extras. There are no audio options, but English subtitles are available.

The Quality
The pillar-boxed anamorphic-widescreen video is not the sharpest you've ever seen, and that's on-purpose, as the film was shot in standard definition, transferred to VHS and then back into a master. Thus, it looks like VHS, only a little better, but with added defects and warping to mimic the visual tics of the medium. The film is also loaded with classic clips that help craft that time-appropriate feel. Color is a touch muted, yet still somehow harsh like video, while the level of detail leaves things a bit soft. There are no issues with dirt or damage (unless intentional) and there are no noteable compression artifacts.

Outside of some recording inconsistencies, the Dolby Digital 2.0 audio track works for the film, delivering the basic center-balanced presentation you expect from a low-budget documentary. The synthy music is kept well-separated from the voices, and everything is sufficiently clean.

The Extras
There are two full-length commentaries available to check out on this film, one with the directors, Dan Kinem and Levi Peretic, and one with producers Josh Schafer and Matt Desiderio (both of whom appear in the movie.) The directors track is basically a rundown of the production, a travelogue of their travels around the country in search of interviews. The energy between them is very high and they have lots of stories and details on the production, including insight into the editing process and their love of coke. Schafer and Desiderio couldn't hope to match the directors' enthusiasm, which affects how the track will be viewed a bit. It's somewhat lackadaisical, and they don't add a lot of info (except for one particularly interesting bit of info that was oddly left out of the movie), serving more like observers than insiders. If this conversational track was the only one offered, it would probably come off better.

Three short films are available to check out, starting with Video Shelf (11:22), a documentary by Peretic about a small family video rental shop in Pennsylvania. The two proprietors, a father and son, discuss the realities of the rental business, including the effects of a devastating fire and changes in how people rent films. It's a rather depressing story, but a story worth telling.

It Wasn't in Vain, It Was in Staten Island (6:35), by Kinem and Peretic, follows along similar lines, profiling Bayware Video, the last video store on Staten Island in New York. Built around an interview with the owner, it tells the shop's history and show's its last dying breaths, as the shelves emptied via liquidation sales.

The Ballad of Chester Novell Turner (7:16) is, thankfully, a different story, as it follows-up with Louis Justin of Massacre Video, who, after losing out on an auction for a copy of Tales from the Quadead Zone, as related in the film, tracked down the director in order to give the film a proper re-release.

The second disc is an archive of related footage that begins with some behind-the-scenes material. First up is the 9:10 "Foggy Mountain Breakdown", which traces the team's mis-adventures on the road in the mountains of northern California/southern Oregon, as they attempt to find a tourist attraction. It's silly, but hardly worth sitting through nine minutes of sped-up driving footage.

It's followed by two August 2013 Q&A appearances, one from Austin's Alamo Draft House with Kinem. Peretic and Bleeding Skull's Joseph Ziemba (18:35) and one from the Back Alley Film Series in North Carolina, with Kinem, Peretic and series director Jay Morong (22:37). Though there is some slight overlap, the Draft House event has a more VHS-focused line of questioning, including a segment about Jerry Maguire, while the Back Alley questions are more general to independent filmmaking, like what gear was used and how much did the film cost to shoot. Together, they hit on more production detail and info than their high-energy commentary.

Now we get into the extended interviews, of which there's an amazing two hours and fourteen minutes. There are sixteen subjects included, as well as complete tours of three collectors' videos (one of which was not featured in the film.) Though there's some great moments in these chats (especially 42nd Street Pete's insight into the early days of video sales) and the tours (each of which is over 24 minutes long) are something else, for some reason, more than anything else, I'll never forget Carlson's attempt to extract himself from his ball pit.

Beyond the massive pile of interviews, there's six deleted scenes, which run a combined 26:34. These topics slide a bit away from the collectors focus, looking at things like "cutboxes" (which was what was done with paper slipcovers to put the movies into clamshell cases), Everything is Terrible's MaguireWatch campaign, Faces of Death (including input from director John Alan Schwartz), the collectors' disgust of RedBox, the heaven-on-Earth that is Scarecrow Video in Seattle and the genre of shot-on-video films. The only disappointment is that the tour of Scarecrow Video was sped-up in spots, when it should be full-length to serve as an archive.

A Kickstarter teaser trailer (2:16) and a theatrical trailer (4:08), which include footage not used in the film, wrap up the on-disc extras. Also included in the set is a four page insert, with more art by the artist whose work is in the film and an essay about VHS from Schafer.

On the Hunt
There's at least one easter egg on the second disc, and it's an amusing little bit of goofiness. Your curiosity should draw you right to it. 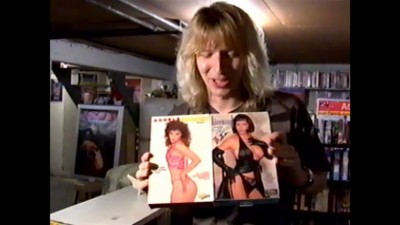 The Bottom Line
Adjust Your Tracking is essentially a feature-length collection of VHS-collector profiles tied together with the memories and thoughts of those who populate this anachronistic niche. As such, it speaks mainly to those already infused with nostalgia for a time when video stores were plentiful and box art actually was an art. The film has the look and feel of VHS (certainly as an homage) and there's a ton of great bonus content, giving you hours of material to enjoy if rewinding is (or was) your thing. This is definitely one where your mileage will vary with your personal interest, but if it's in your wheelhouse, it's a treat.