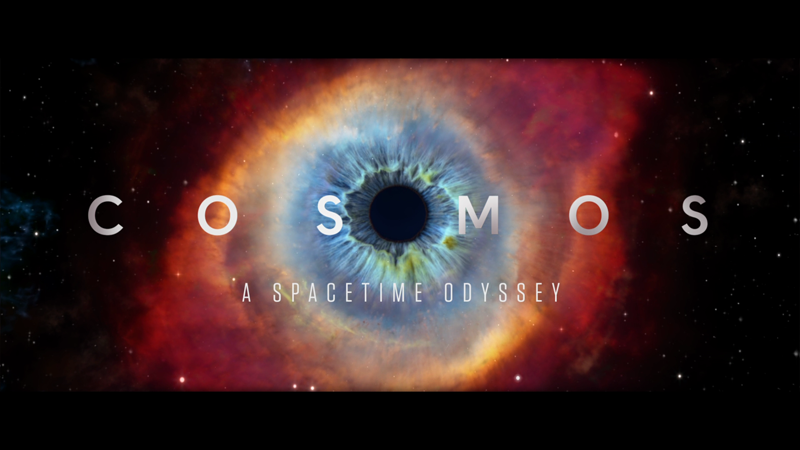 Reviewer's Bias*
Loves: The idea of science, gorgeous nature photography
Likes: Neil deGrasse Tyson
Dislikes: Feelings of insignificance and mortality brought on by learning about the universe
Hates: How unscientific my mind is, anti-science politics and philosophy


The Show
When I first went to college, I was an athletic training major, after spending plenty of time injured as a football and wrestling player in high school. However, after struggling through human anatomy and physiology and kinesiology, it became clear to me that the sciences were not my strong point, and so I made the switch to journalism, which has worked out well for me. That doesn't mean I don't appreciate science though, as I love to learn how things work and the reasons behind them. Thus, I respect someone like Neil deGrasse Tyson, who works to spread a love of science to the masses, just as I despise those who, like the anti-vaccination crowd, deny science and think like they live in the dark ages.

Despite society being more plugged-in and digital than ever before, ever since the presidency of George W. Bush, it's hard to not think that the conservative elements of America have an anti-intellectual bent, going against established scientific research at every turn. If ever there was a time when science needed a boost in the public's eyes, it's now, which makes a show like Cosmos, airing on one of the Big four networks, such a wonderful gift. Though I was too young to appreciate Carl Sagan's original Cosmos series, there was a generation of science-minded people influenced by it, and hopefully this new series will have the same influence.

Shepherded by Seth MacFarlane and hosted by astrophysicist (and Sagan acolyte) Neil deGrasse Tyson, Cosmos: A Spacetime Odyssey is an update on Sagan's show, touching on most of the same topics, including the origins of the universe, the history of scientific discovery and exploration, a number of scientific phenomena (including light, electricity and shifting land masses) and man's impact on the planet. 34 years later, that last part has taken on an increased importance, as the show explores the dangers that face humanity as a result of our pollution and abuse of resources. Unfortunately, these elements focusing on climate change, along with the stories about how, over millennia, science has had to overcome the power of religion and simple-minded fear, not to mention the inclusion of the secular origins of the universe, are likely to keep the show's knowledge away from people who could most use its insight. 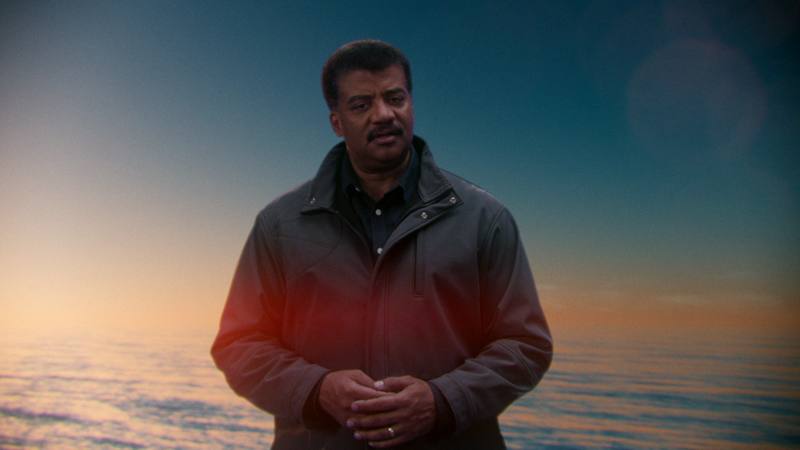 As a successor to Sagan, there couldn't have been a better choice than Tyson, who, thanks in part to the writing of Ann Druyan (Sagan's collaborator from the original show), manages to be entertaining and informative, welcoming yet not condescending. When dealing with so much information in such a complex field, it's a tricky balancing act, but Tyson's knowledge, passion, authoritative voice and gift for making a connection with the audience makes it less of a lesson and more of a story. That he has the personality he has helps avoid the pitfall of what could have been a "scientist trying to be hip" feel.

While the series wouldn't really work without Tyson, the gorgeous nature footage and space animations are the true eye candy that power this show. You don't have to appreciate a moment of the history or information the show smoothly introduces and explains to enjoy the sumptuous visuals, including swirling nebula, cataclysmic explosions and Earthly wonders. The original series' concept of the Ship of the Imagination, the vessel that would allow Sagan, and now Tyson, to travel throughout time and space to observe the Universe, got a revamp along with the rest of the show, and the result is a sleek, beautiful vehicle that serves as home base and, as a benefit, helps sell the true scale of the concepts the show covers. It's just one of over a thousand effects shots created for the series, making it one of the most impressive feasts for the eyes ever.

Aside from his interest in science, MacFarlane's involvement makes more sense when you consider how the series updated the original's historical segments, which explore notable scientists and moments in scientific advancement. Instead of again going down the period costume drama route, the show drew on MacFarlane's primary artform: animation. Utilizing a unique style that blends photorealistic backgrounds and stylized, more graphic character art, these bits effectively tell the stories of the heroes of science, and lend added drama to the proceedings, aided by an impressive cast of voice actors that includes Patrick Stewart, Richard Gere, Kirsten Dunst and a mostly unrecognizable MacFarlane. Interestingly, my 8-year-old watched in rapt attention when the show focused on the science, but these story-based animated segments made her lose interest. Maybe when she's older she'll learn to appreciate cartoons. 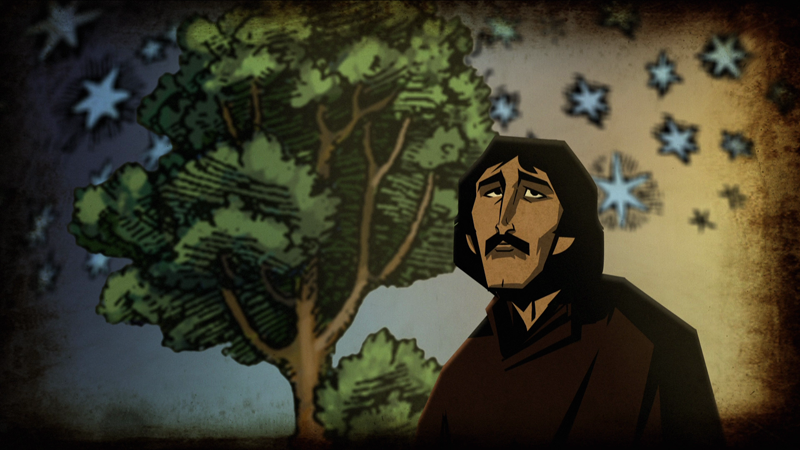 The Discs
The 13 episodes of the first (and hopefully not last) season of Cosmos: A Spacetime Odyssey are spread over four Blu-ray discs, which are held in a slightly thicker-than-average Blu-ray keepcase, with a pair of dual-hubbed trays and a two-sided cover with disc listings on the inside. The menus utilize some of the show's amazing visuals to clean, simple effect, and feature options to watch all the episodes, select shows, adjust set-up and check out the extras. There are no audio options, but subtitles are available in English SDH, French, Quebecois French. Spanish, Dutch and Portuguese.

The Quality
The 1080p, AVC-encoded transfers are basically science porn. The computer-generated animation delivers some of the most remarkable visions of space ever seen, and the quality of the image matches it at every step, while the footage captured for the show is equally impressive, featuring vivid color, deep black levels and an incredibly high level of fine detail. The material from Sagan's version of Cosmos and some of the source material utilized pales in comparison, but it's still presented well, suffering only from the age of the technology used to collect it. The animation is also quite nice, showing off all the textures in the backgrounds and artistic technique, while, with just 13 episodes spread over four discs, there's plenty of room, so digital distractions aren't an issue. This is just a gorgeous-looking show.

The series' DTS-HD Master Audio 5.1 tracks are just what was needed to fully immerse oneself in the show's impressive audio mix, with wonderful sound effects and a tremendous score by Alan Silvestri (full of his signature touches that make the whole experience feel so monumental.) The surrounds get plenty of work from the music and the cosmic atmospherics that are omnipresent, while the center channel delivers Tyson's baritone (along with Sagan's archival voice and the other voice actors) crisply. The low-end also does its part to deliver the punch you'd expect from a show built around the Big Bang. It's just a beautiful presentation that makes you want to crank up your system.

The Extras
The extras start with an audio commentary on the first episode, with Druyan, producer Mitchell Cannold, producer/director Brannon Braga, producer Jason Clark and animation producer Kara Vallow. Between the five of them, most elements of the production are accounted for, though it would have been nice to hear Tyson, MacFarlane and Pope in the room with them. In a very friendly chat (at one point the group cracks up over a mention of sperm on the part of Druyan) there's a wide array of topics covered, including the development of the Ship of Imagination, the visual effects, MacFarlane's role and Tyson's importance, as well as some expensive pants. No one should have anything to complain about when it comes to this group's insight into the production.

Though Tyson, MacFarlane and Pope weren't on hand for the commentary, they, along with many other of the show's creative participants, are heard from in "Cosmos: A Spacetime Odyssey - The Voyage Continues", a slickly-produced 41:20 featurette that breaks the series down, examining all the parts, including location shooting, visual effects, animation and the score. Through interviews and behind-the-scene footage, this piece paints an excellent overview of what the show is and how it was made.

There's more from the core trio of Druyan, Tyson and MacFarlane in "Celebrating Carl Sagan: A Selection from the Library of Congress Dedication" (34:37). On the occasion of Sagan's materials and letters being entered into the Library of Congress (aided financially by MacFarlane), the three spoke of science and Sagan for an audience. Here, Druyan shares memories of her late husband and Tyson, at his most charming, shares the story of his connection to Sagan and the man's impact. MacFarlane, who never got to meet Sagan, but felt his influence, is his usual jokey self, but he also points out the dangers of our society's "science regression" and decries the politicization of science and how the media pays attention to fringe anti-science forces. All three are well worth a listen.

There's more discussion of the show in "Cosmos: A Spacetime Odyssey at Comic-Con 2013" (40:03). After some footage of Tyson in and around Comic-con, we get to check out an epic sizzle reel for the show, and a video introduction from MacFarlane, before Druyan, Tyson and Braga sit down for a panel moderated by British media personality Jonathan Ross. The discussion in intriguing, and the Q&A period with the audience results in some fantastic responses from Tyson, who is on his A-game. There's also a brief, special appearance by a certain science guy.

The Interactive Cosmic Calendar, a big element of the series, is available to check out as its own extra. With the history of the universe, up until this point, compressed into the space of 12 months (for easier understanding) you can navigate through 15 milestones, with text descriptions that are also read by Druyan and access to related clips from the show. As a tool for comprehension, it's neat and well-designed (aside from the text being a bit too small to read from across the room) but it's not an item that will inspire repeat access.

Also included with the set are a couple of Fox trailers. 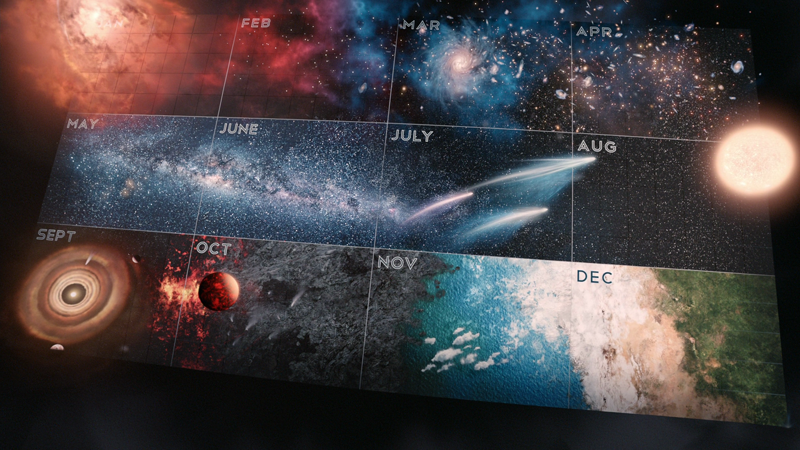 The Bottom Line
Cosmos: A Spacetime Odyssey is a perfect example of a remake done right, keeping the spirit of the original fully intact, incorporating the people who made it in the first place, and simply updating the material to fit the advancement of time and technology. The result is a series that stands on its own as a entertaining populist primer on science, while still satisfying fans of Sagan's classic. You couldn't ask for more from the presentation on this Blu-ray set, and the extras included are interesting, informative and certainly in-depth. Fans who watched when it aired on TV should check it out in optimal quality (and with solid bonus content), while just about anyone who considers themselves even even moderately intelligent should watch it with those they love (and/or respect.) Sadly, the people who would benefit from it most probably would object to it. Their loss.