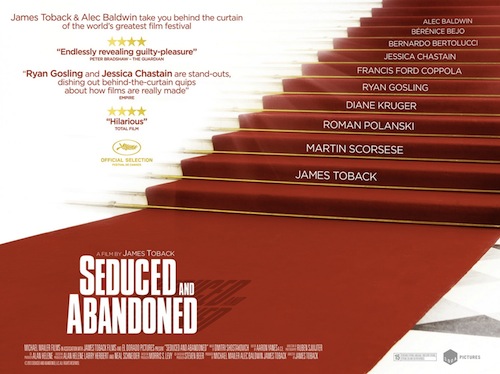 Seduced and Abandoned is a documentary that tries to capture the schizophrenic nature of the movie business, as embodied by this Orson Welles quote that appears a few times throughout: "I look back on my life and it's 95% running around trying to raise money to make movies and 5% actually making them. It's no way to live."

Toback, who directed the documentary, does not turn this trip to Cannes into a straightforward narrative. He uses the occasion of being at the most famous film festival in the world to weave in more general conversations with filmmakers, actors, critics, and film business people to create a kind of State of the Industry report, counterpointed by anecdotes about filmmaking and broader thoughts on film as an art form. Toback and Baldwin talk with the old guard from the '60s and '70s -- Polanski, Bertolucci, Coppola, Scorsese, actor James Caan -- about the way Cannes and the movie business has changed over the years. They mostly echo Welles's sentiment, but with the added wrinkle that companies are only willing to pay for something if it is either dirt cheap or a mega-budgeted franchise.

As for Toback and Baldwin's salesmanship, they find a lot of resistance to getting investors for their project. Some sniff that Baldwin is just a TV comedian, others don't have much faith in Toback's idea of a leading lady, Neve Campbell. Many people, after hearing the pitch and the projected cast, say that maybe Toback and Baldwin could get $5 million to make their film, but nowhere near $20 million. Toback, either from years of experienced Hollywood schmoozing or as a slight put-on for the film, starts mutating the project in the hope of sounding more appealing to investors. Even though he has claimed to Campbell that she must be his leading lady before leaving for France, he entertains casting Jessica Chastain or Inglourious Basterds' Diane Kruger or The Artist's Bérénice Bejo, if it means he'll actually get the money to make the movie. By the end, Toback and Baldwin have decided maybe the film shouldn't even be set in Iraq.

It-boy Ryan Gosling sits down to talk with Toback and Baldwin, and he manages to get in the most interesting soundbites. Our hopeful filmmakers gently try to coerce Gosling into joining the project, but mostly they talk about his background and approach to performing. Gosling's descriptions of spirit-crushing auditions and the drudgery of acting on a film set are sharp and illuminating, plus they perfectly capture filmmaking's uneasy marriage of creativity and commerce.

Anyone familiar with the personalities of Baldwin and Toback (or familiar with the documentary about the latter, The Outsider) knows that these are both self-important, macho men, and some of that self-involvement does inevitably slip into the film. But apart from being a little overlong -- and featuring an odd montage near the end where interviewees respond to Toback about whether or not they are ready to die -- Seduced and Abandoned is far less solipsistic than one might expect. Toback lets the ideas flow freely and intuitively, but shows admirable restraint in organizing it all.

The DVD
HBO has turned to their good friends at the Warner Archive to put Seduced and Abandoned on manufactured-on-demand DVD-R.

The Video:
There's not much to fault in the widescreen 2.35:1 presentation of Seduced and Abandoned. A number of film clips are presented along with the newly shot footage at Cannes, frequently shown in split-screens. Both types of footage look good. The interviews have all been shot with an eye toward making them attractive, rather than giving them a flat guerrilla-style or blandly journalistic look. The compressed DVD image is a little smeary and prone to slight aliasing and noise, but nothing that seriously detracts from the quite good digital cinematography.

The Audio:
Though the doc comes fitted with a Dolby 5.1 surround mix, most of it has a pretty 2.0 feeling. Toback does slather on lots of orchestral music from Shostakovich, which finds its way to the rear channels, but that's about it. The dialogue is consistently clear and understandable. A perfectly satisfactory soundtrack. No subtitles, but the film has closed captioning.

Special Feature:
Billed as an Exclusive interview with director James Toback conducted by Alec Baldwin, this actually appears to be a nine-and-a-half minute outtake from the film, where Toback talks to Baldwin about his infamous days-long acid trip in college (which also found its way into Toback's dramedy Harvard Man), plus his early work on Fingers and The Gambler.

Final Thoughts:
Though not without its indulgences, Seduced and Abandoned is a compelling tribute to -- and lament for -- the film business. Recommended.