TGG Direct // Unrated // February 24, 2014
List Price: $11.99 [Buy now and save at Amazon]
Review by Stuart Galbraith IV | posted May 8, 2014 | E-mail the Author
"Whenever the laws of any state are broken, a duly authorized organization swings into action. It may be called the State Police, State Troopers, Militia, the Rangers... or the Highway Patrol. These are the stories of the men whose training, skill and courage have enforced and preserved our state laws." - Highway Patrol's opening narration

Regardless, Highway Patrol, while not nearly as good as the original Dragnet, is still quite entertaining, partly because it has some but not all of Dragnet's attributes, but also because of star Broderick Crawford's amusing performance as HP Chief Dan Matthews. I hadn't seen the series since I was a kid, and had forgotten Crawford's insanely fast, auctioneer-like line-delivery. I don't know if Highway Patrol was ever repackaged with time-compressed episodes, but if it had been Crawford's dialogue probably would have been reduced to an impenetrable buzz, like those fast-moving aliens in that episode of Star Trek.

I signed up to review Highway Patrol: Season 2, Volume 2, listed as an Amazon exclusive, but instead was sent "Complete Season 2" instead. Reportedly there were some labeling mistakes made on Volume 2, which did not affect the discs themselves. In any case, I was more than happy to receive the complete season set; it's an addictive series. 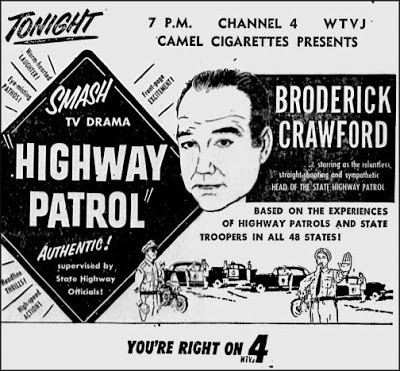 Highway Patrol is a lot like Dragnet, and also like a rural forerunner to Webb's later Adam-12. Adam-12, explicitly set in (mostly) the Valley above Los Angeles, particularly the Universal City/Studio City area, was much more realistic, and holds up a bit better than Highway Patrol, which was set in a never-identified Western state and shot further west in the San Fernando and Simi Valleys, then largely undeveloped scrub country.

However, the California Highway Patrol did indeed cooperate with Ziv Television Programs, producers of the syndicated series, initially providing real patrol cars and uniforms. And like Dragnet, Highway Patrol helped familiarize the use of police jargon, though Highway Patrol often misuses terms like "10-4," something Dragnet strenuously avoided, and at times Crawford's zippy earnestness becomes comical: "Twenty-One-Fifty to Headquarters!"

This format works pretty well, allowing for nice character-driven pieces like "Typhoid Carrier," about an AWOL title character recklessly and fatally infecting a small-town farm girl. On the run and sick of his restricted lifestyle, he throws caution to the wind, threatening the entire valley despite pleas from a patient wife to turn himself in. Meanwhile, the girl's grieving father turns vigilante.

Crawford, who had won an Academy Award as the Huey Long-styled politician in All the King's Men (1949) but whose off-screen heavy drinking and "retired pugilist" looks generally ruled out leading man roles, proved a real coup for Ziv; Crawford frequently guest-starred on other Ziv shows in addition to his work on Highway Patrol. His gruff persona fit the series like a glove and, out of character at the end of each show he invites viewers back to next week's "unusual" episode, adding traffic safety comments like, "Leave your blood at the Red Cross, not on the highway!"

Highway Patrol was shot in black and white 35mm and licensed to TGG Direct from MGM, via their United Artists library (inheritors of the Ziv library). The transfers are surprisingly good; I was expecting outdated, blurry video transfers decades old but these appear fairly recent. There are 7-8 episodes per disc, and they appear complete, unedited and, thankfully, not time-compressed. The mono audio, Dolby ProLogic II, is also fine. No subtitles or alternate audio options, and no Extra Features. My one complaint is that the DVDs are stacked three to a spindle, though these are much less flimsy than a similarly licensed set of Ziv's Bat Masterson I'm reviewing concurrently.