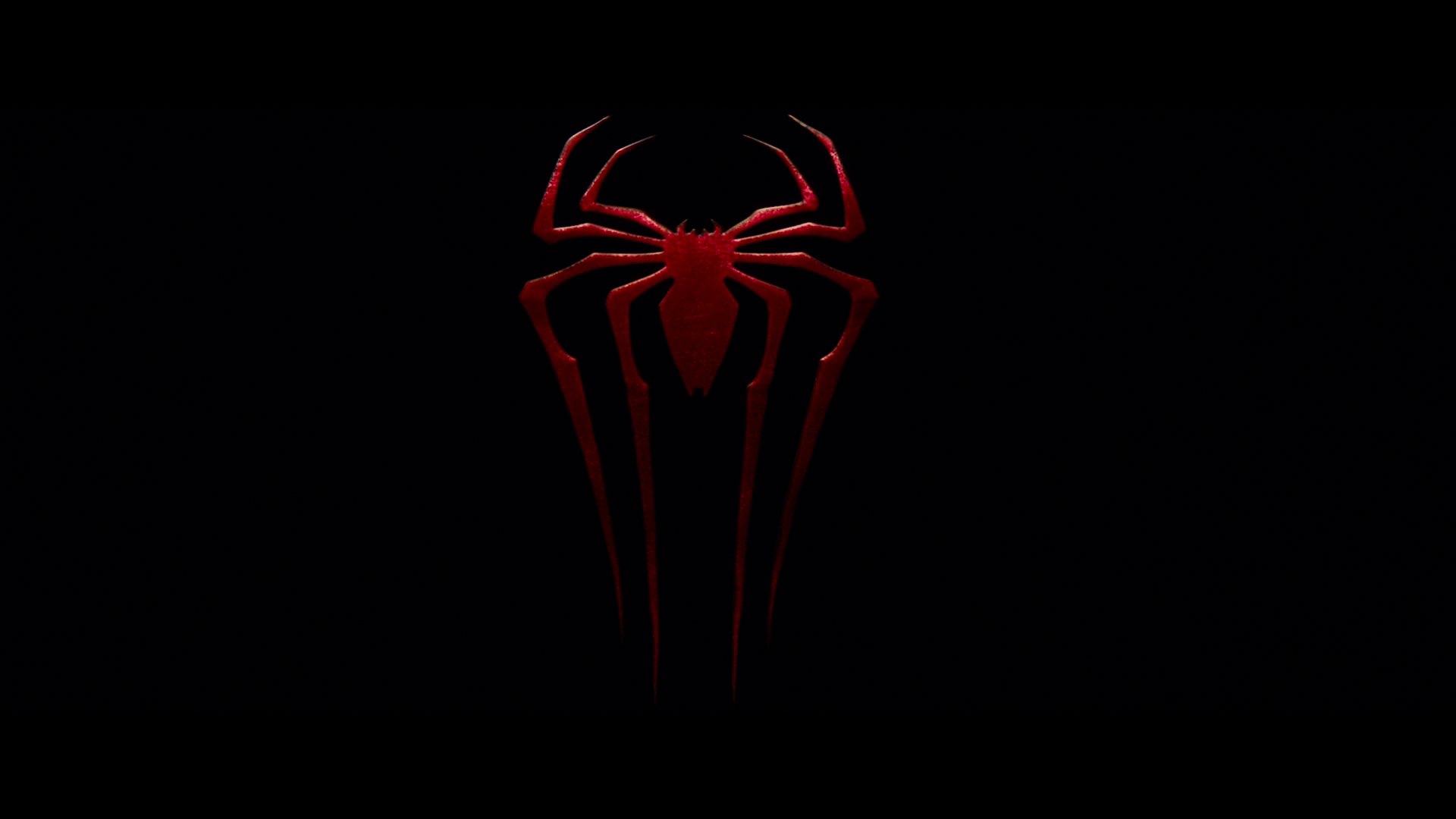 Director Marc Webb seems more in command of his blockbuster comic-book adaptation The Amazing Spider-Man 2 than he did on the previous outing, which is impressive considering Webb is only two films out from his first project, indie (500) Days of Summer. This sequel is all about Andrew Garfield's Peter Parker and Emma Stone's Gwen Stacy, and the young actors are in an off-screen romantic relationship at the time of this writing. They have palpable chemistry, and much of their dialogue feels natural and improvised. Webb amps up the spectacle with dizzying effects and slow-motion fight sequences, but The Amazing Spider-Man 2 borders on overkill with its three villains and heavy human drama. Despite these narrative flaws, I found a lot to like in the film, particularly Garfield, Stone, Dane DeHaan's Harry Osborne, and Jamie Foxx's Electro. This film truly feels like a comic book come to life, and isn't that the whole point?

There are a number of things set up for future Spider-Man films in this installment that I cannot discuss without revealing upcoming villains, character motivations, and dramatic hurdles. That said, I prefer this sequel to 2012's The Amazing Spider-Man because it can finally choose its own direction instead of rehashing the origin story we saw only a decade prior in Sam Raimi's Spider-Man. Webb's first film was good, but a rushed production in the wake of Spider-Man 3's underwhelming debut was evident from the choppy editing and muddy storyline. Garfield and Stone were that film's best assets, and they continue to be the shining stars of the sequel. The filmmakers incorporate a number of key stories from Stan Lee's comic book source to create the narrative for The Amazing Spider-Man 2, which is mostly successful if a bit too busy. 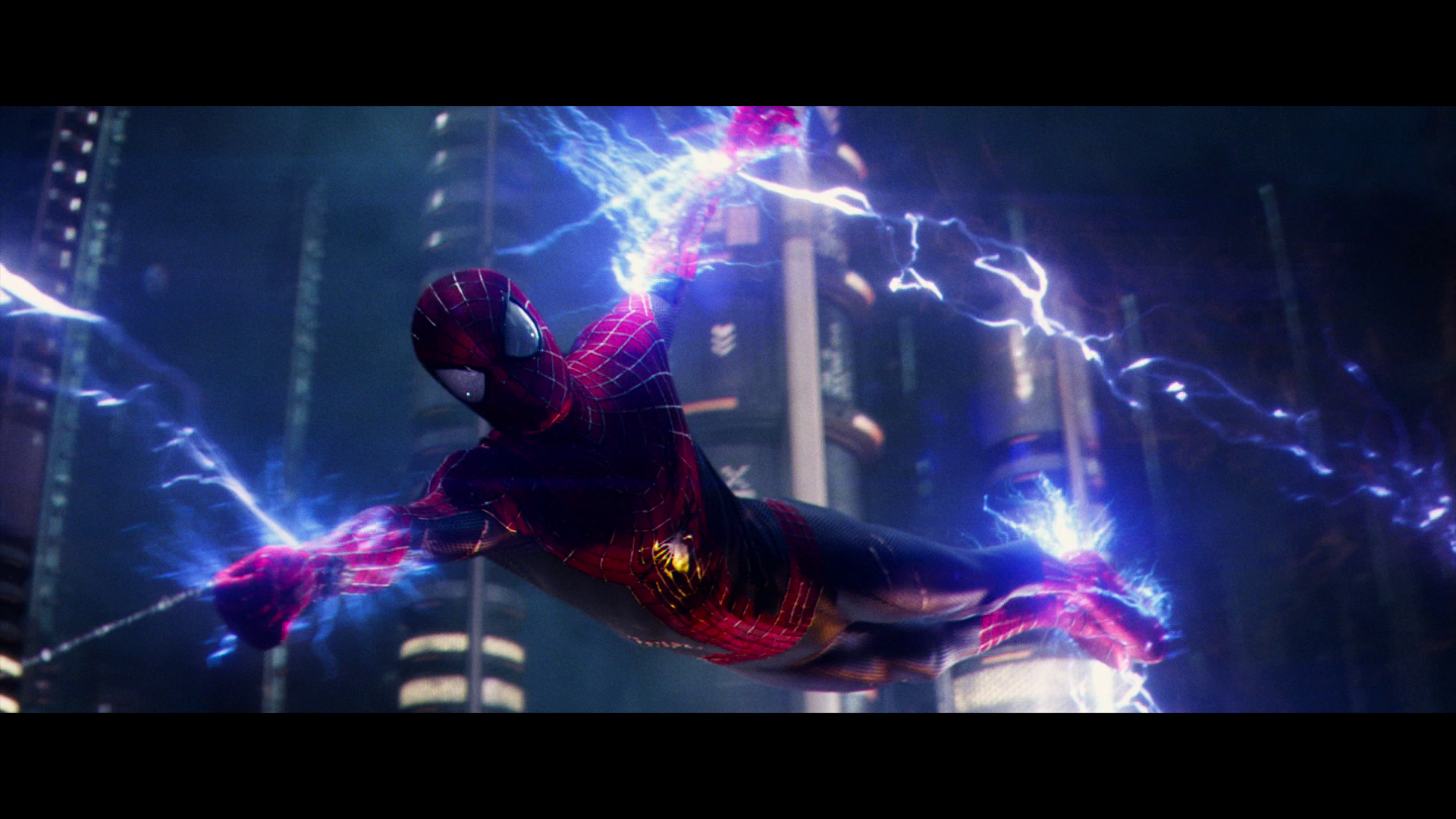 Peter and Gwen's relationship hits a rocky patch when he gets bogged down being Spider-Man. I like that the film's Gwen refreshingly understands this immense responsibility, and she never comes down on Peter for trying to help those in need. I cannot say the same for Raimi's Mary Jane Watson (Kirsten Dunst). Torn between loving Gwen and keeping a promise to her deceased father (Denis Leary) to never involve Gwen in Spider-Man's work, Peter distances himself after high school graduation. Gwen begins an Oxford scholarship competition, and Peter reconnects with old friend Harry, who takes over as CEO of OsCorp after the death of his father, Norman (Chris Cooper). Meanwhile, lowly OsCorp engineer Max Dillon (Fox) nurses an obsession with Spider-Man before an encounter with electric eels gives him the power to manipulate electricity. There is additional character development for still-grieving Aunt May (Sally Field), and the film sheds light on the work of Peter's deceased parents, Richard (Campbell Scott) and Mary (Embeth Davidtz).

If it was not clear by the above paragraph, there is a lot going on here, which cuts both ways for the film. The Amazing Spider-Man 2 is never boring, but the crammed narrative might have benefitted from a bit more focus. The filmmakers have an underlying motive for introducing characters like Harry Osborne and Aleksei Sytsevich (Paul Giamatti) in this film: Sinister Six, Drew Goddard's villainous ensemble piece set to be released in 2016. I'm not sure how Garfield's Spider-Man will play among these foes, but spin-offs are certainly in vogue at the moment. To that end, Foxx's Dillon/Electro is the throwaway villain here despite getting the most attention. Electro's backstory is weak, but his electrically charged theatrical exhibition provides an opportunity for the flash-bang visual effects expected in this type of film. Neon blue with pulsating veins, Electro has a Times Square showdown with Spider-Man as the voices in his head chant about the superhero's supposed deception. It's a cool scene, and the noisy, dubstep-like chanting is interesting and unsettling. 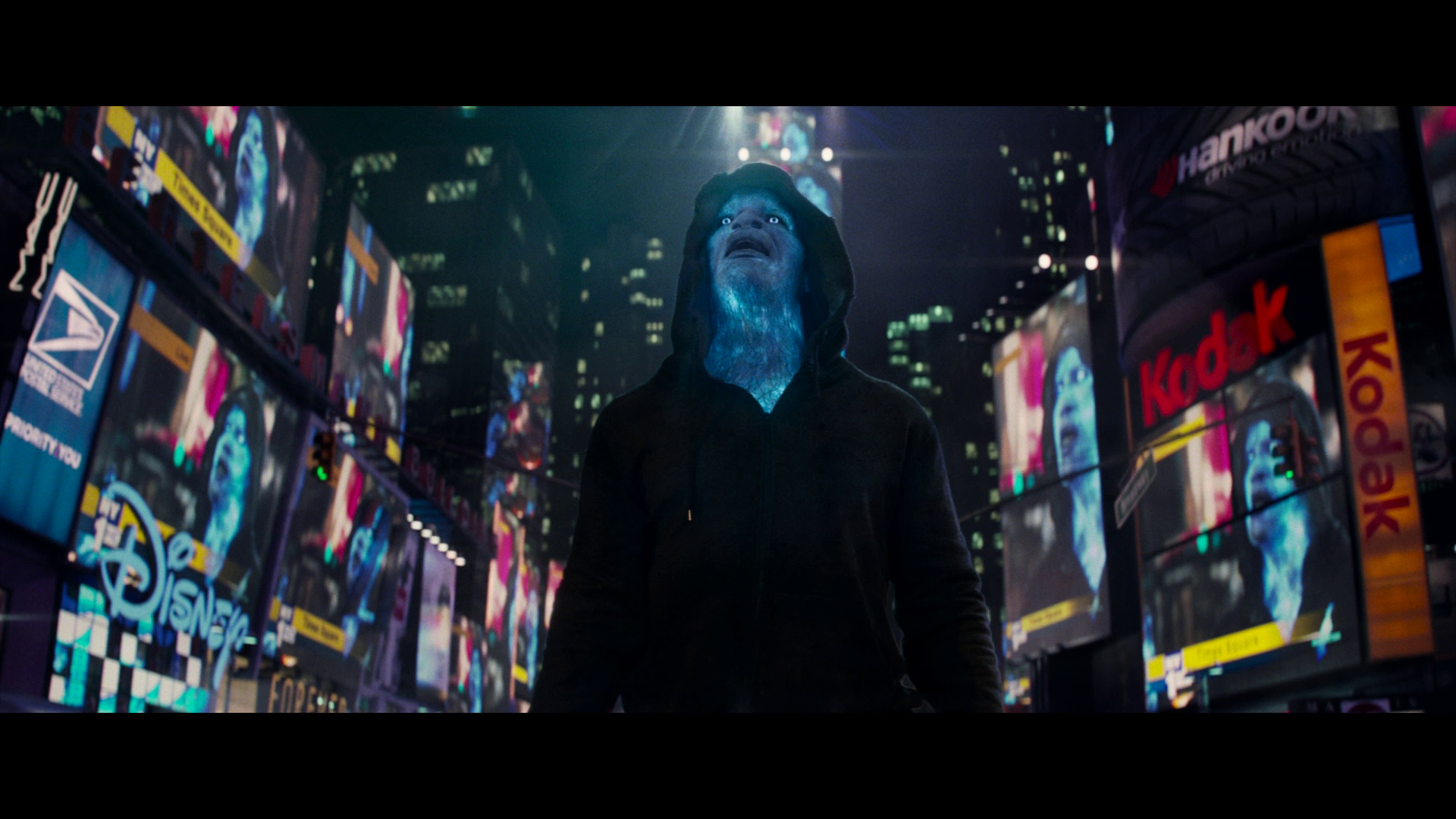 The film sets up Harry as a major player in Sinister Six, and DeHaan proves an interesting casting decision. The actor's performance is good, and his cadence and physical appearance create a far different Harry than the one portrayed by James Franco. Webb's film somehow manages to be both more and less campy than Raimi's trilogy depending on the scene, but that's not necessarily a criticism. The Amazing Spider-Man 2 is a comic book given life, and the frenzied action, rapid-fire narrative and escalating drama recall a hot-from-the-presses comic. Garfield is more comfortable in the suit this go-round, and is less moody and more goofy than Tobey Maguire. The film wastes little time showing Spider-Man homing his crime-fighting skills, and instead busies Peter with relationship woes, the mystery of his dead parents, and the onslaught of new baddies in New York City.

All the visual effects and giant set pieces are in service to the Peter/Gwen storyline, and The Amazing Spider-Man 2 nearly earns an honest emotional response over this pairing. The writing could be better, but Garfield and Stone do an excellent job selling their roles and this movie. I am a big fan of Stone, and she elevates Garfield's already solid performance. Webb does not quite find the balance between this drama and spectacle, and the film understandably includes a number of rollicking action sequences. The visual effects are strong, but the bullet-time slow motion feels a bit stale. There is a lot of flash to these bits, but not much substance. This is an entertaining film that could be better. A tighter, more focused story will improve the next sequel. Juggling a blockbuster franchise with spin-off expectations is difficult, and Webb should be commended for completing his task. 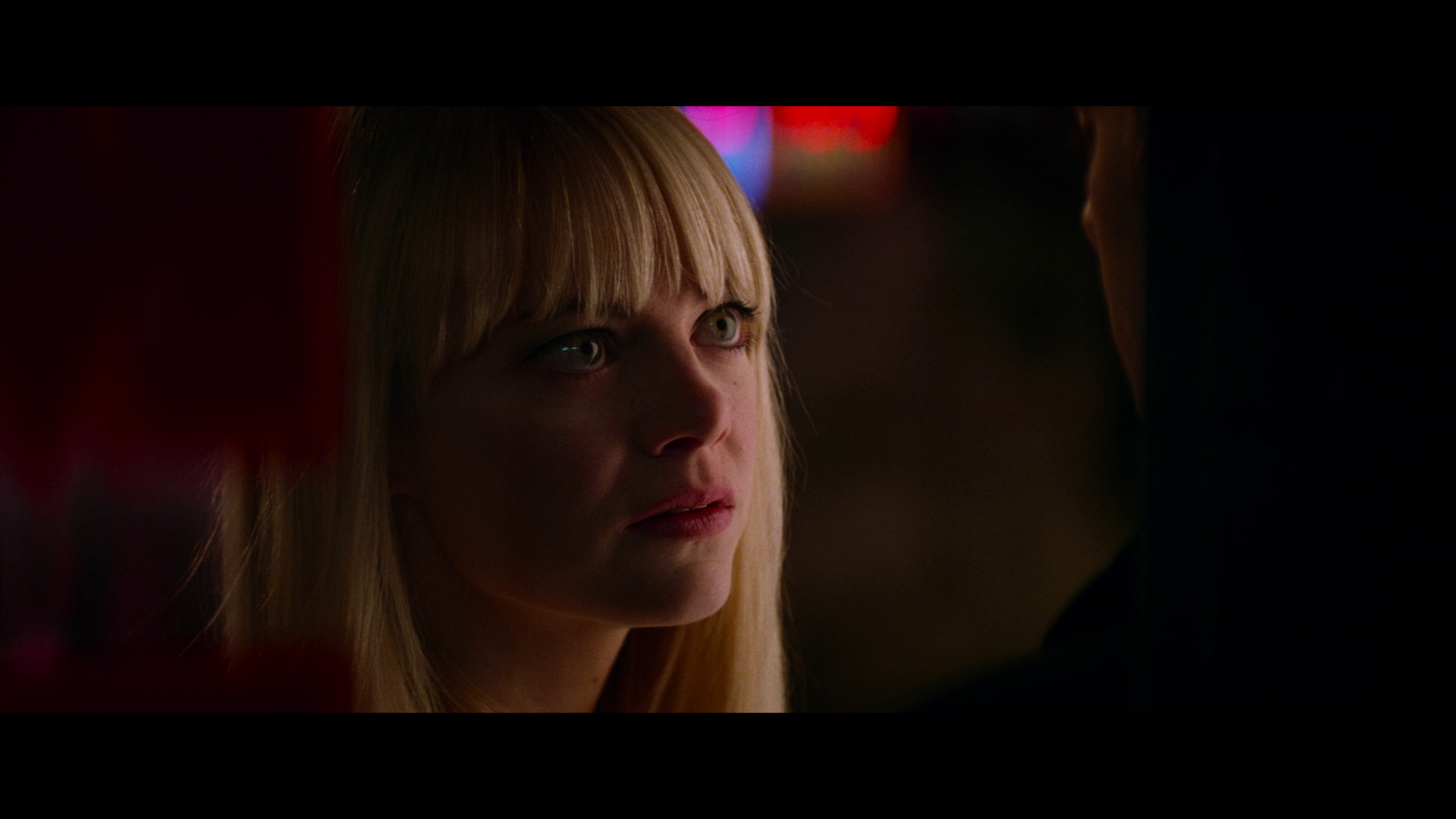 The 2.40:1/1080p/AVC-encoded image from the 35 mm source looks expectedly excellent for this big-budget release. The film stock gives the image a crisp, natural appearance, which is a nice change from the numerous digital offerings of late. The Blu-ray transfer has been "Mastered in 4K," and exhibits a wealth of detail and texture. Close-ups reveal facial imperfections, lines of worry and fear, and other fine-object details. Wide shots are steady, deep and crystal clear, and backgrounds stretch for miles. The bold reds of Spidey's suit and the neon blues of Electro's body pop from the screen and are nicely saturated. Flesh tones are accurate, and black levels are deep and inky. There are no issues with digital scrubbing or anomalies.

The 5.1 DTS-HD Master Audio mix is percussive and immersive. The numerous action effects are treated to full surround representation, and the track complements the excellent sound design. Electro's Times Square showdown is most impressive. Billboards and cars crash down around the sound field, the subwoofer rattles the floor, and the voices in Electro's head dance throughout the room. Bass response is impressive, and the track exhibits excellent range and clarity even in quieter scenes. There are plenty of ambient city sounds to surround the viewer, and dialogue is often directional. Effects, dialogue and score are nicely integrated, and the track provides an excellent representation of the theatrical experience. A French 5.1 DTS-HD Master Audio mix and a Spanish 5.1 Dolby Digital mix are also available, as are English, English SDH, French and Spanish subtitles.

This two-disc "combo pack" includes the Blu-ray, a DVD copy of the film and an UltraViolet HD digital copy. The discs are housed in an Elite Blu-ray case, which is wrapped in a shiny, embossed slipcover. There are a number of worthwhile extras: 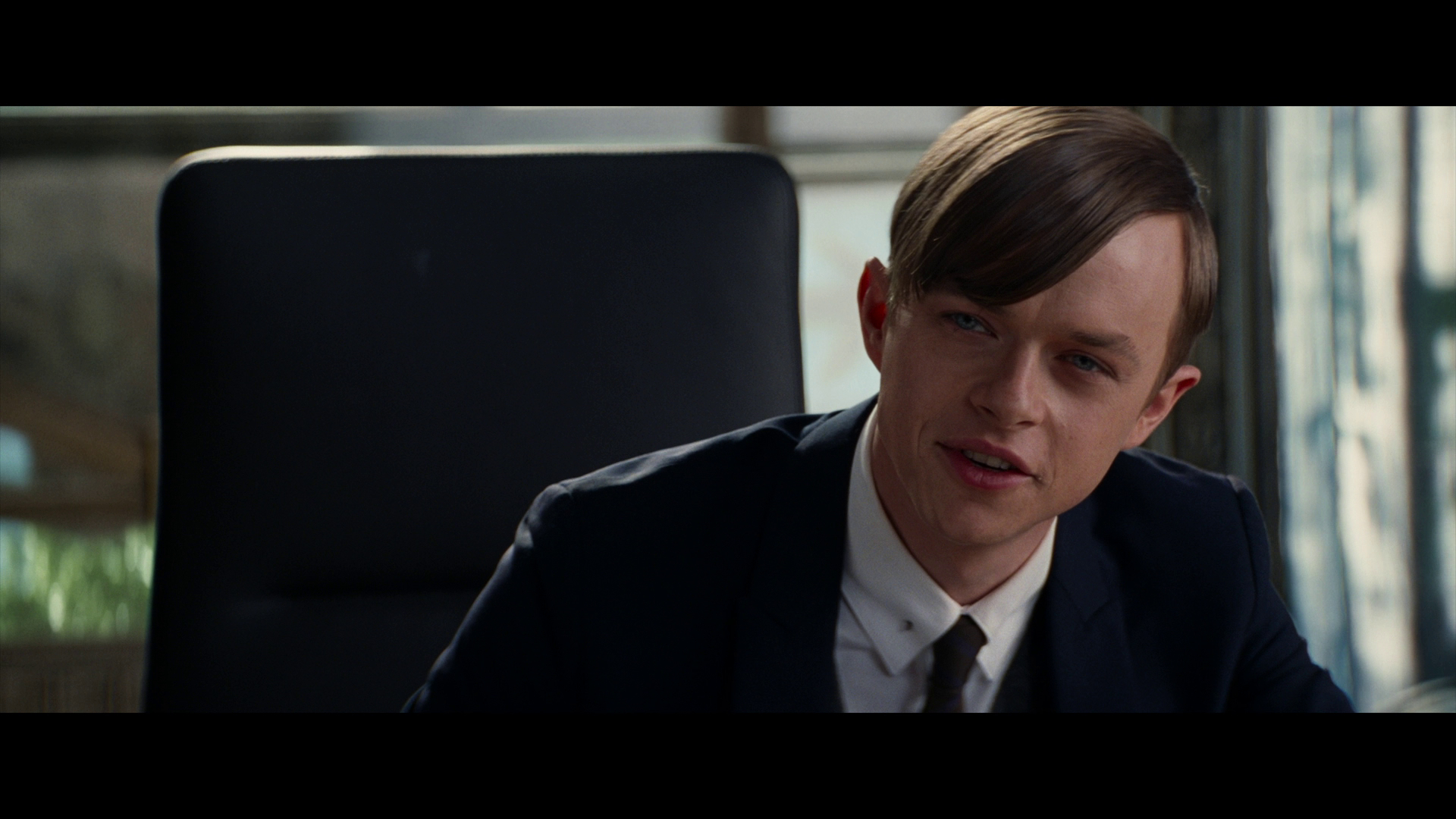 There is a lot going on in The Amazing Spider-Man 2, which suffers from villain bloat and some narrative shortcomings. Even so, the film is buoyed by strong performances from Andrew Garfield and Emma Stone, and supporting actors Jamie Foxx and Dane DeHaan are enjoyable. A lot of the conflict here is meant to set up Sinister Six, which is fine, but I hope the next outing focuses a bit more on its own story. This second film from director Marc Webb is a more confident outing, and Peter Parker and Gwen Stacy steal the show. Recommended. 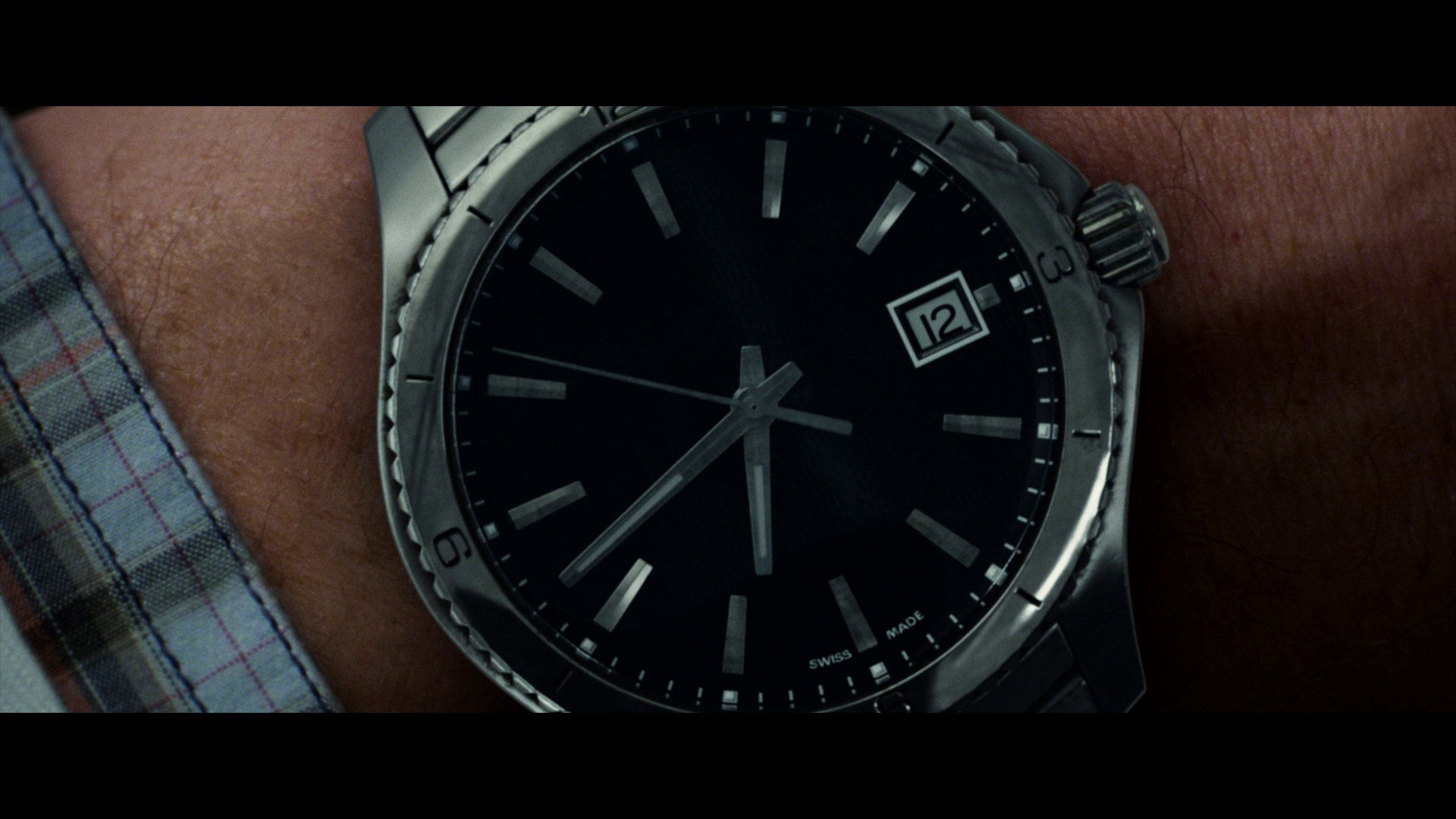 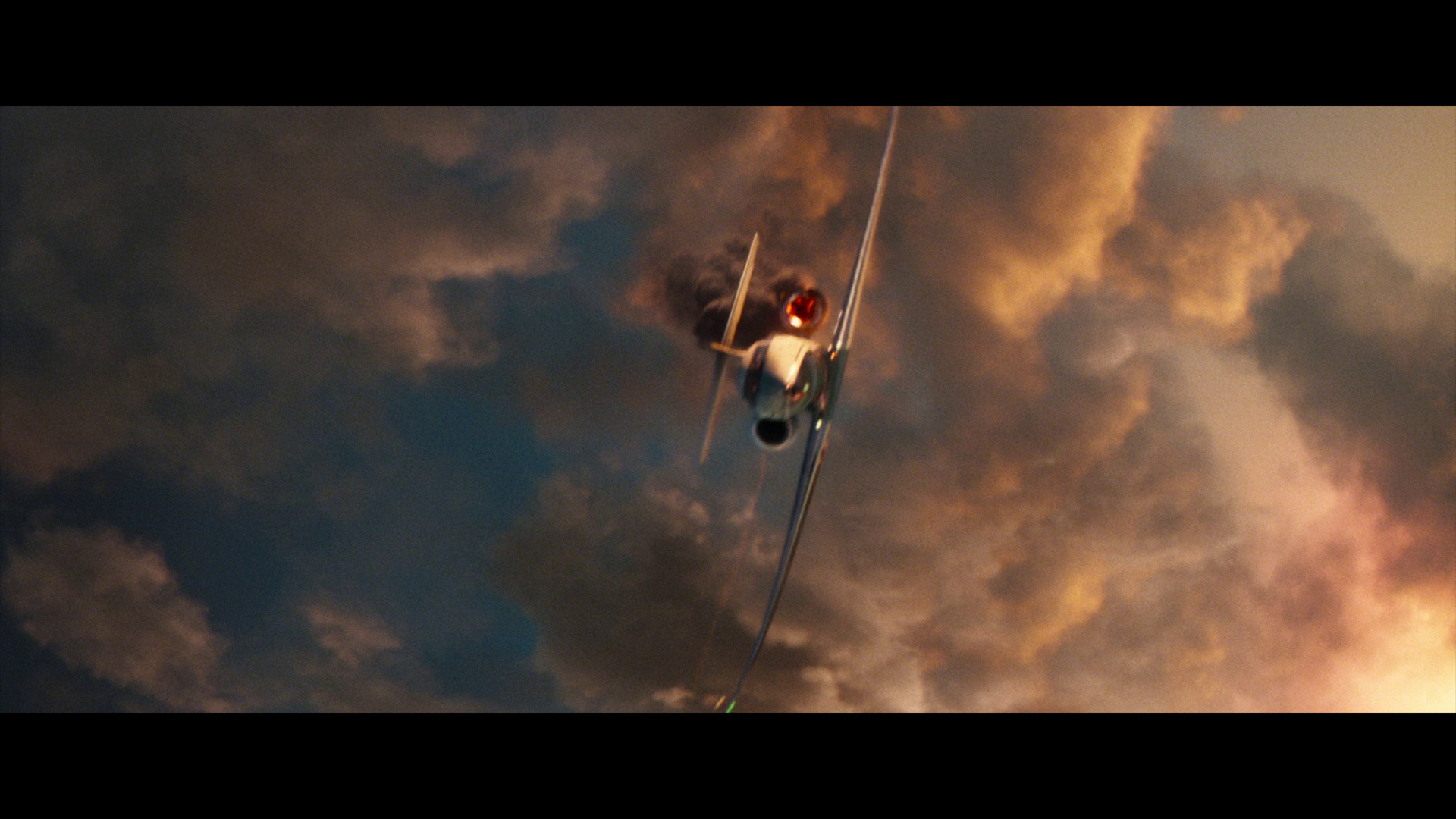 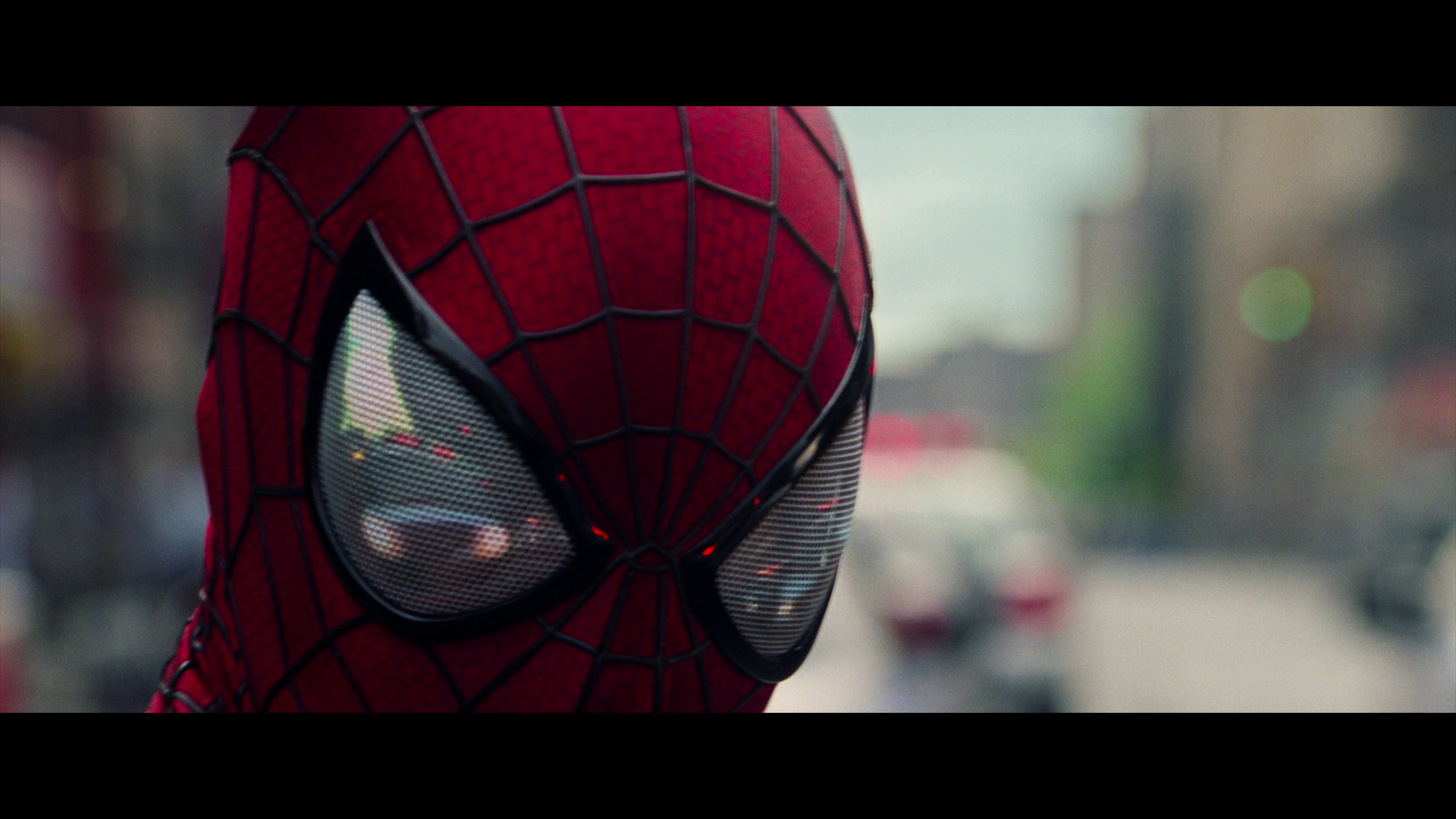 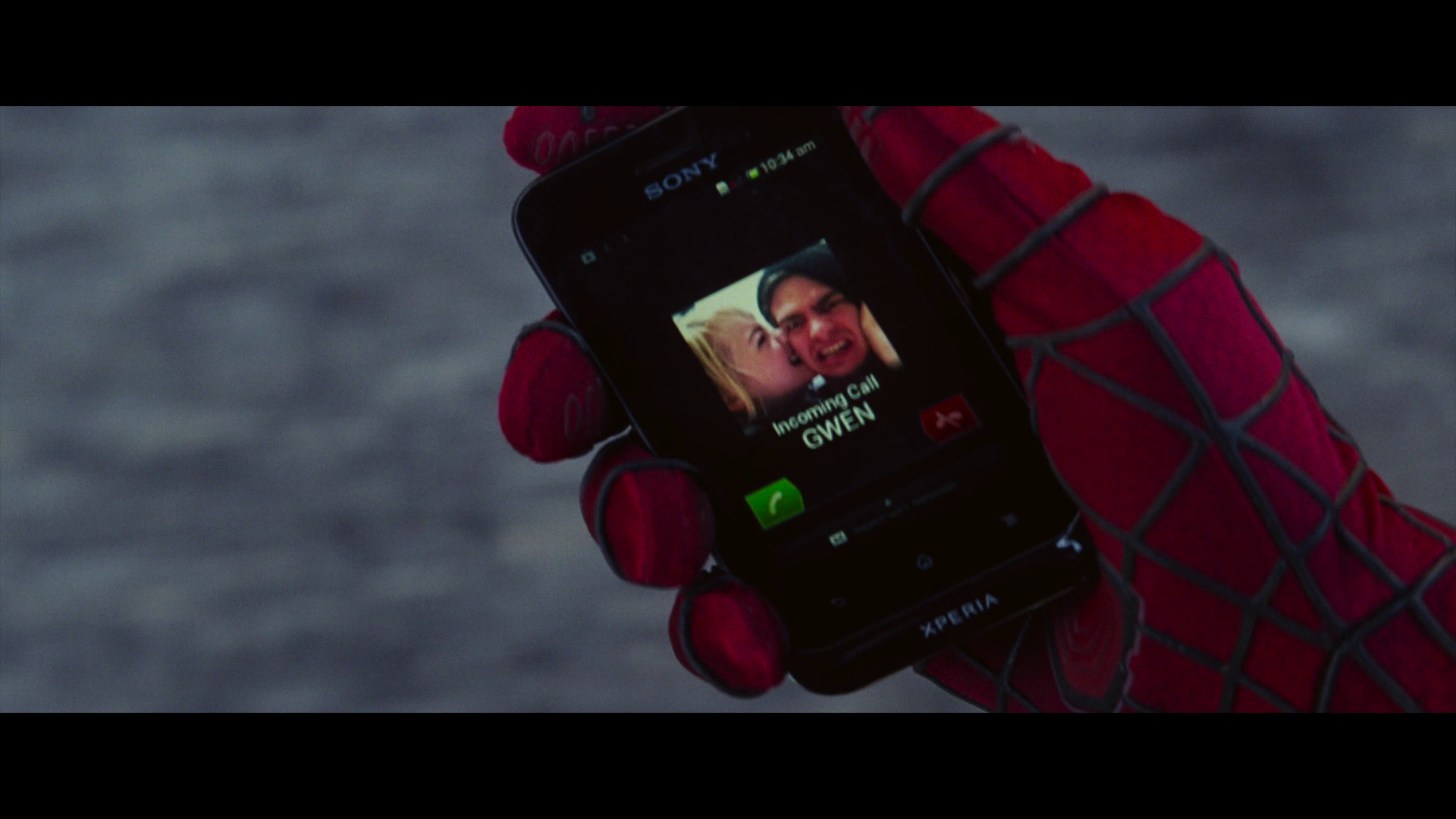 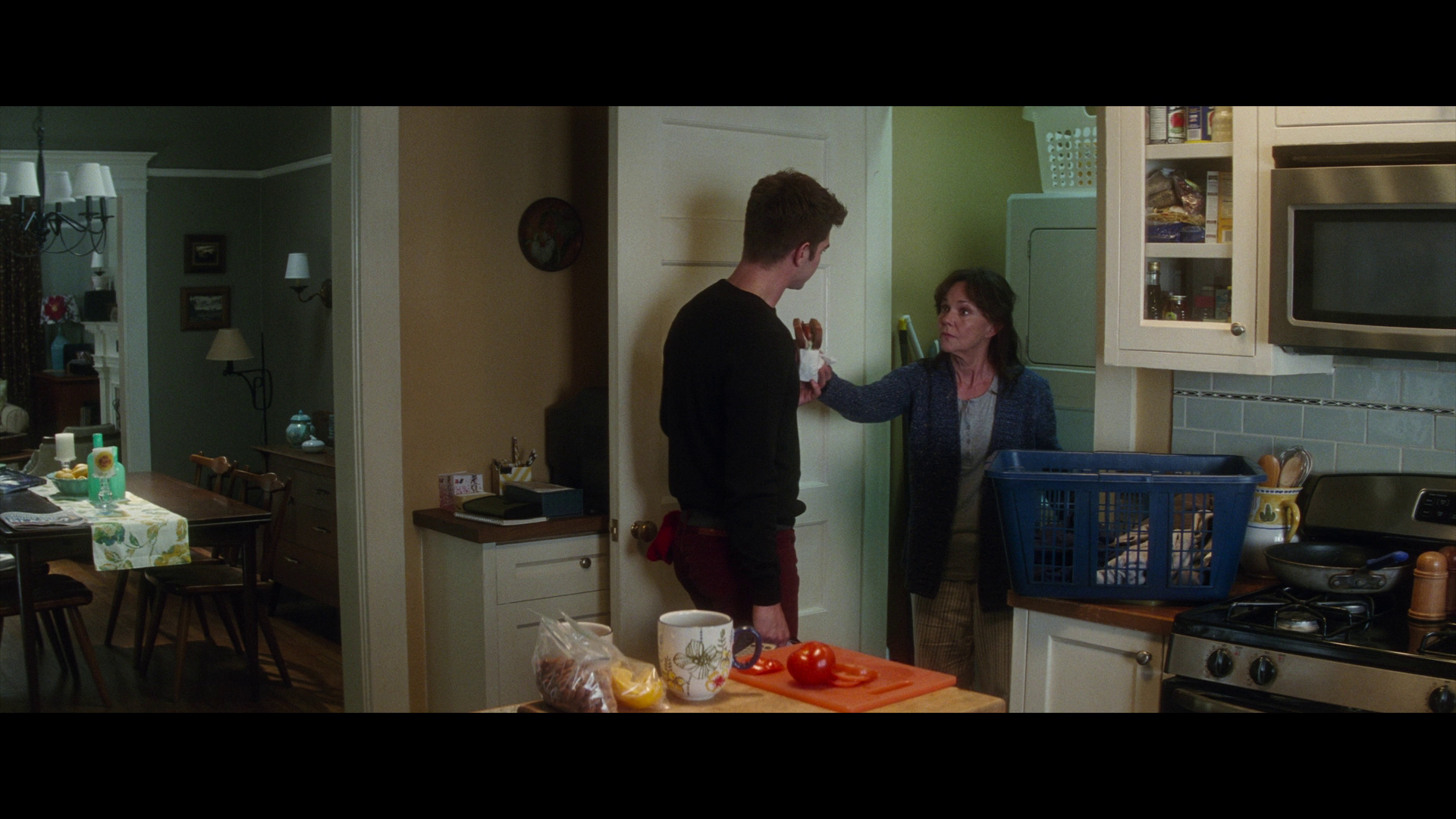 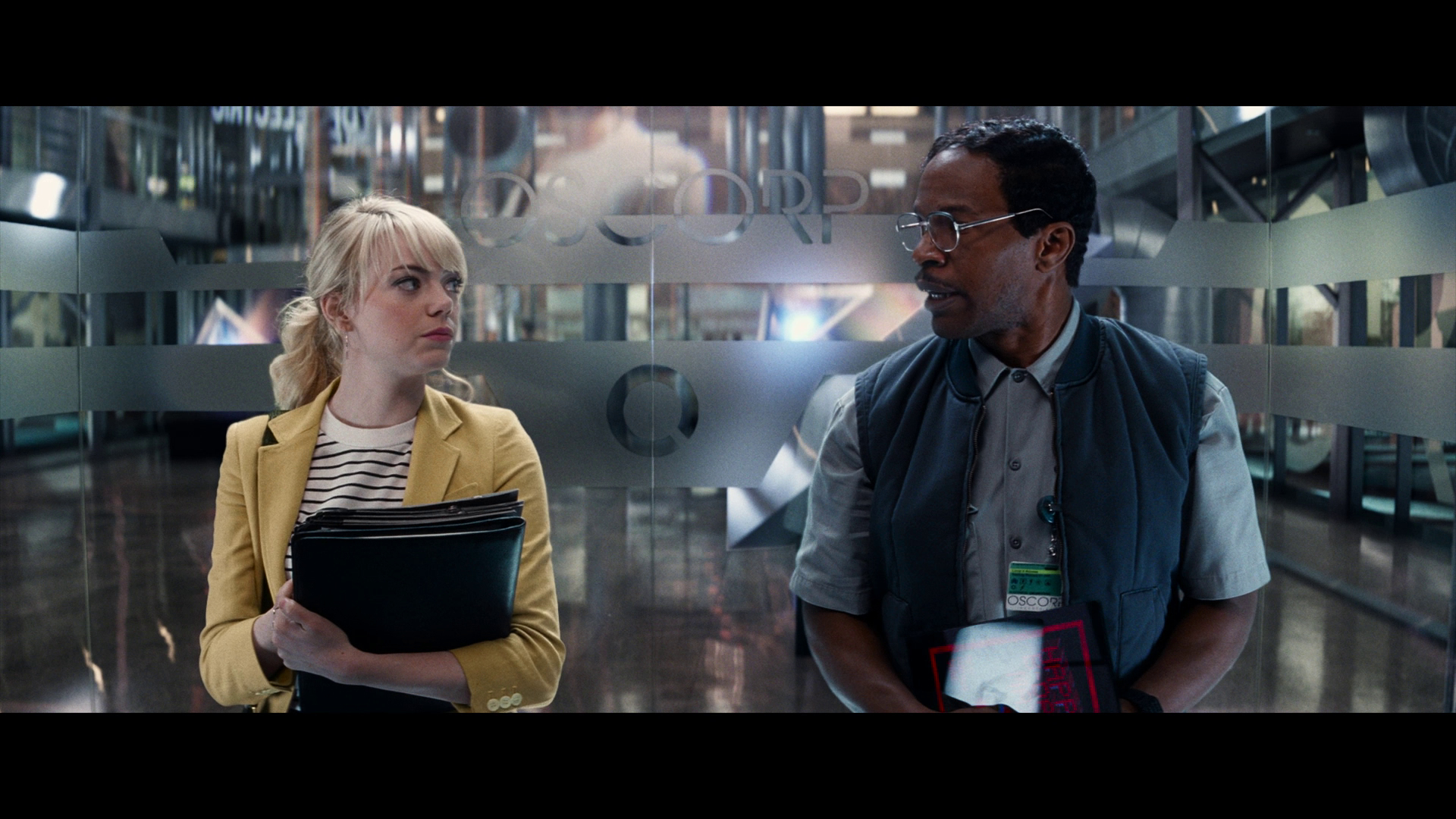 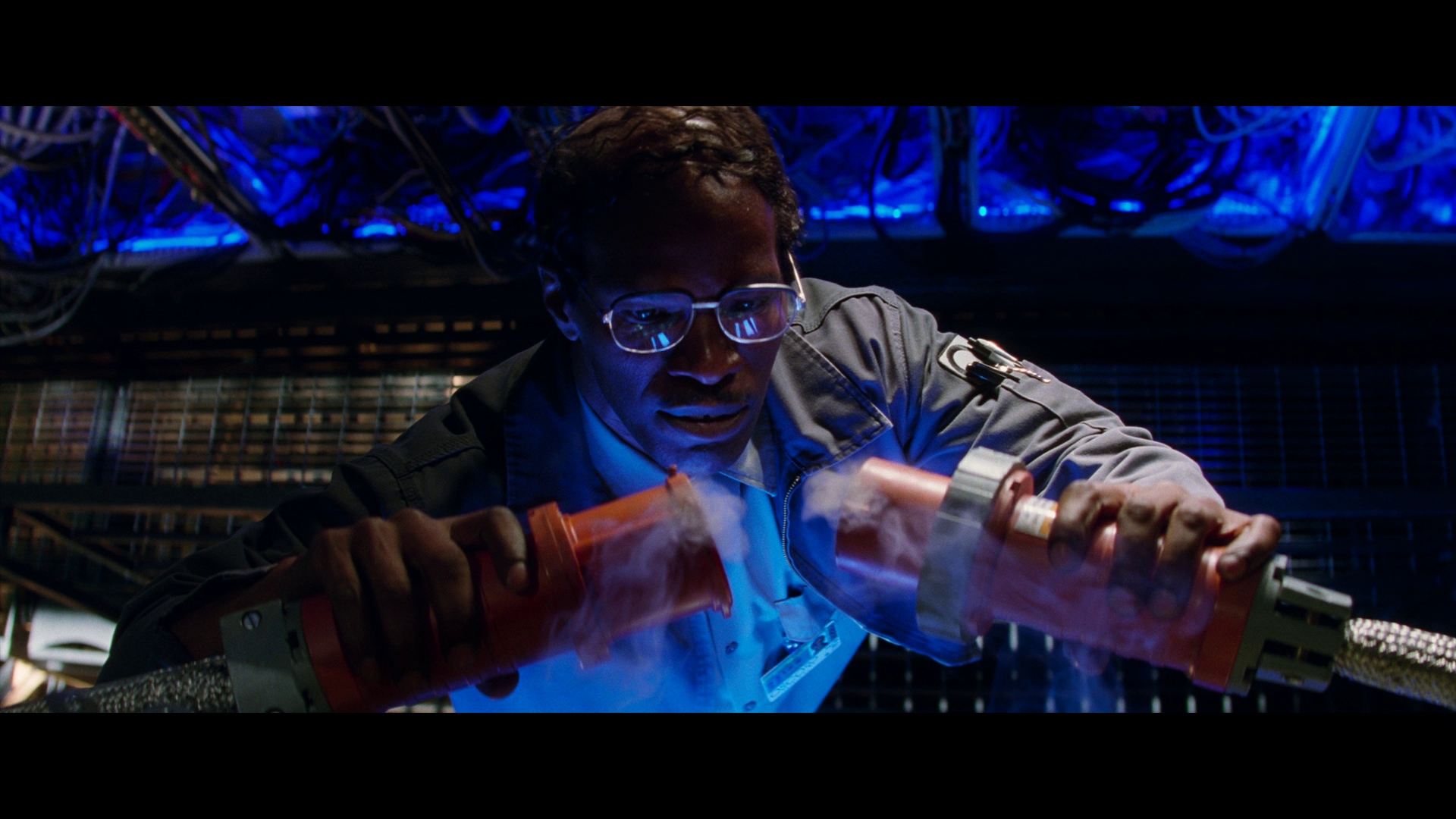 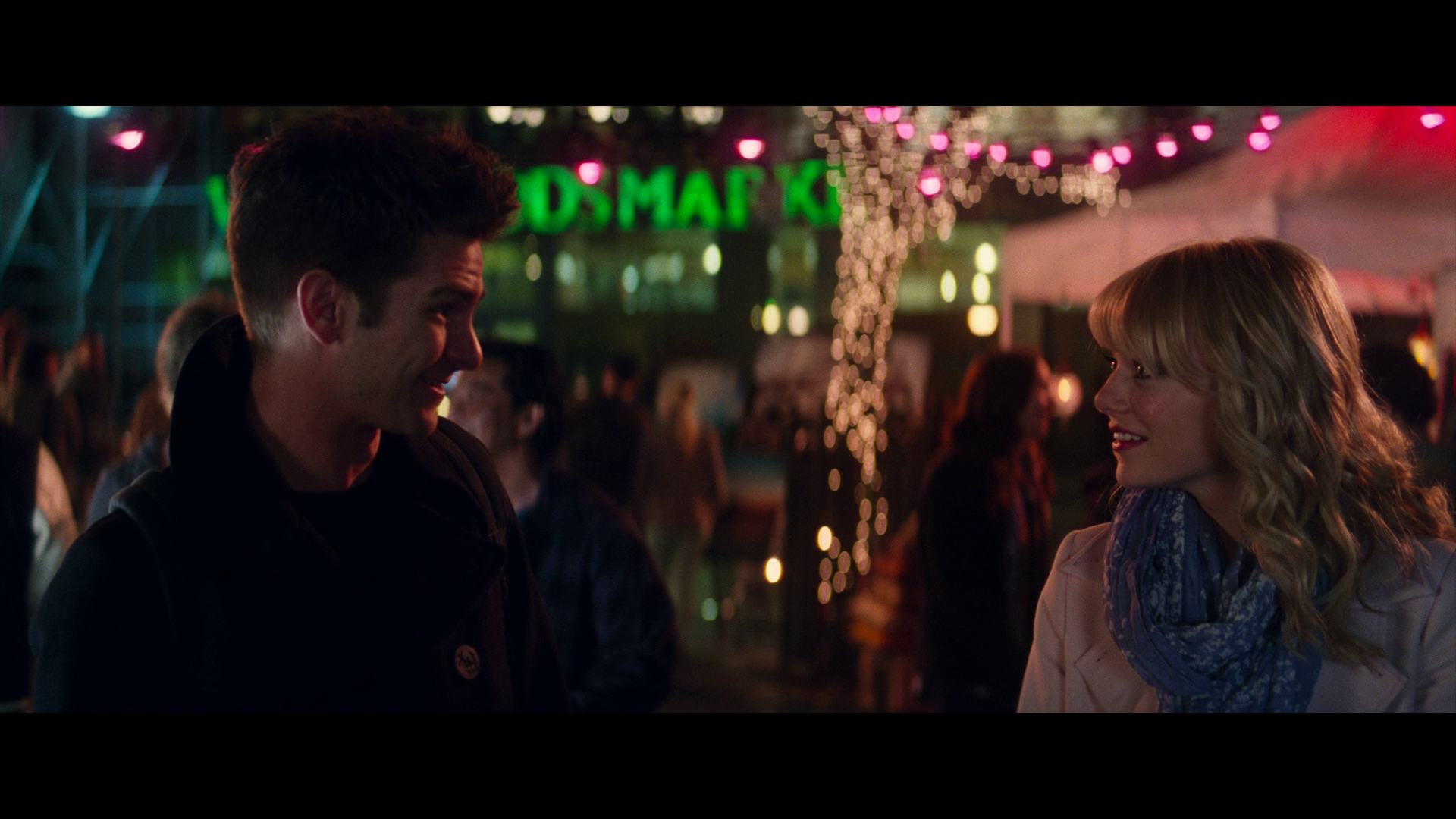 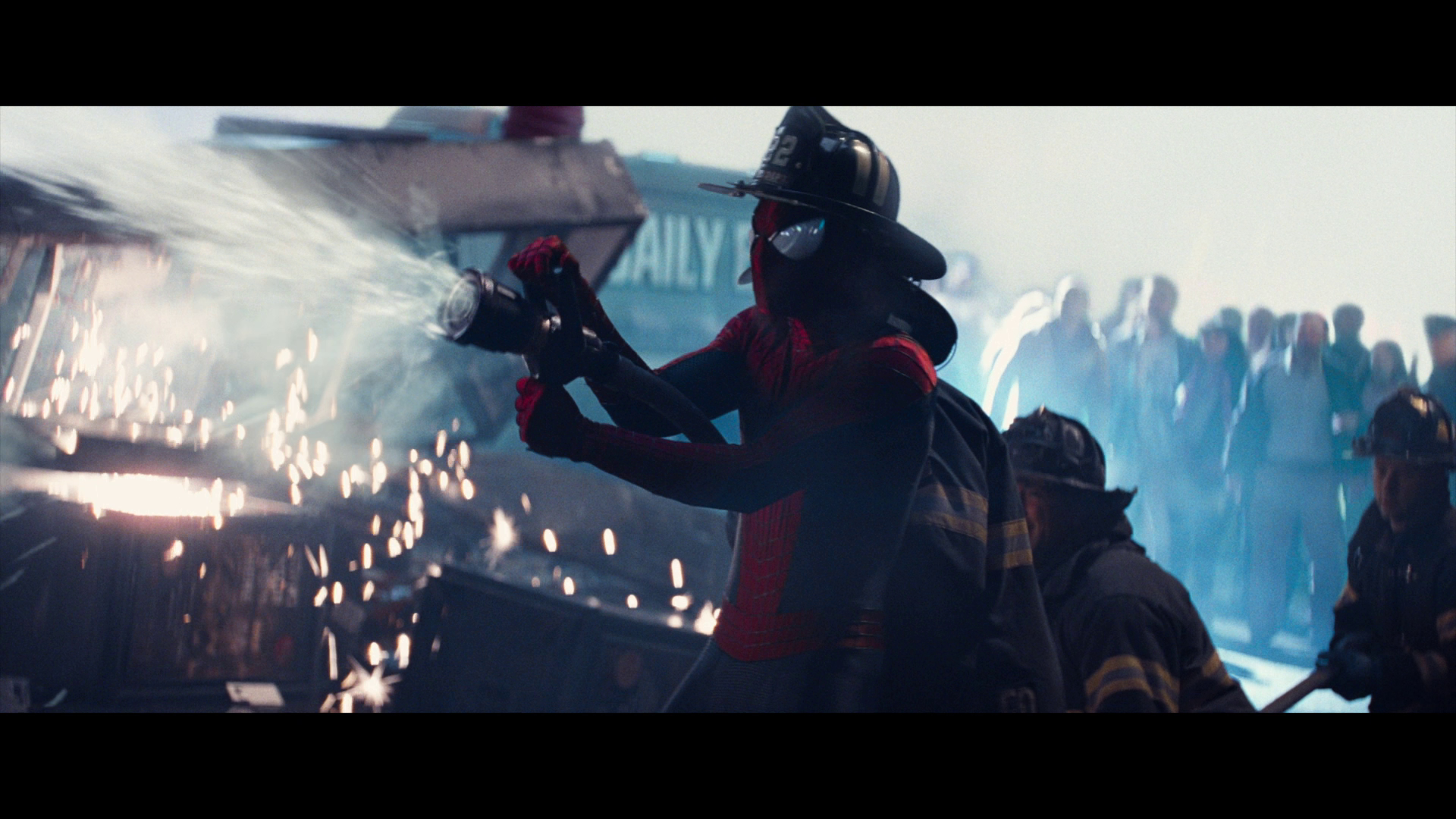 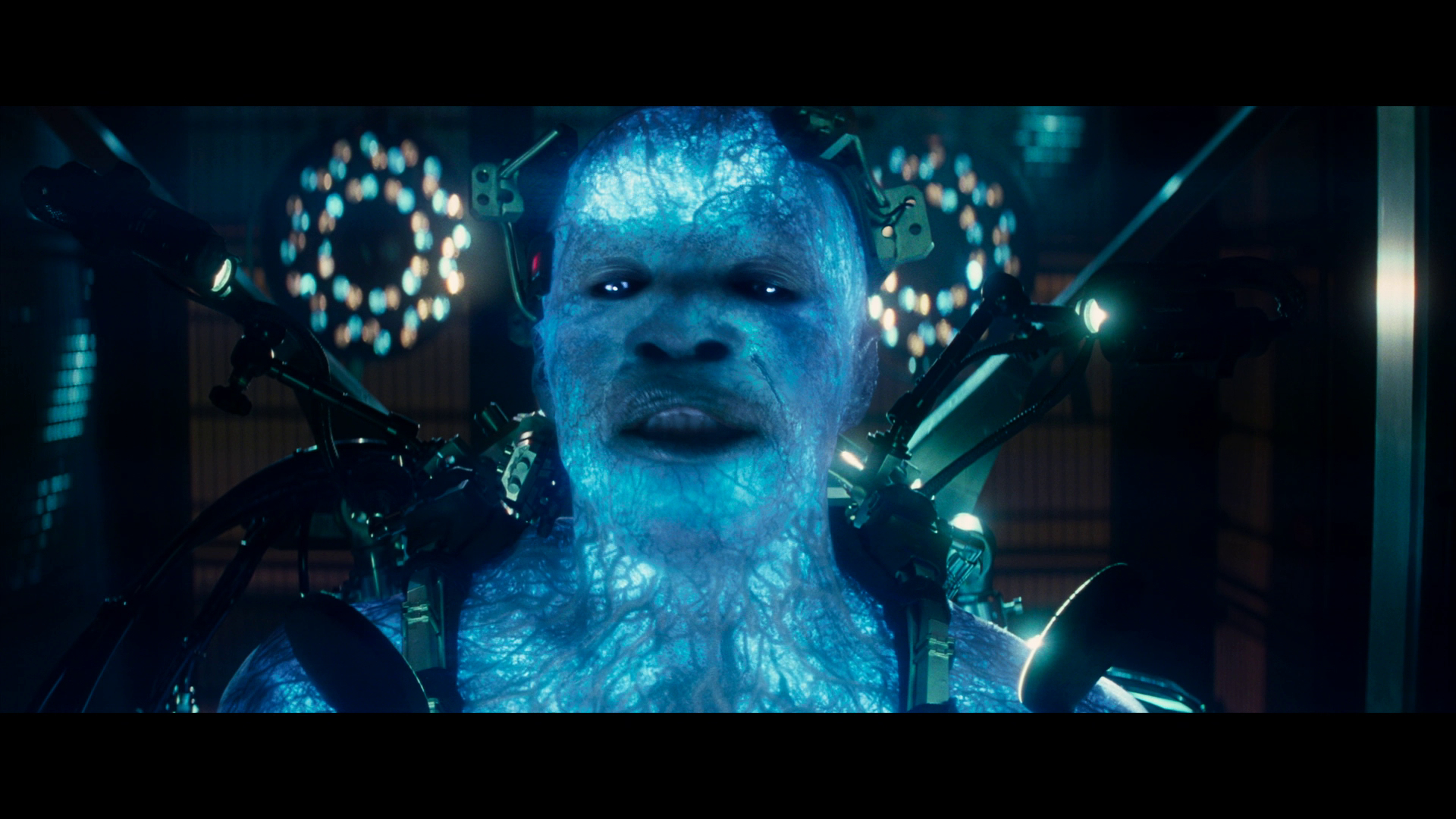 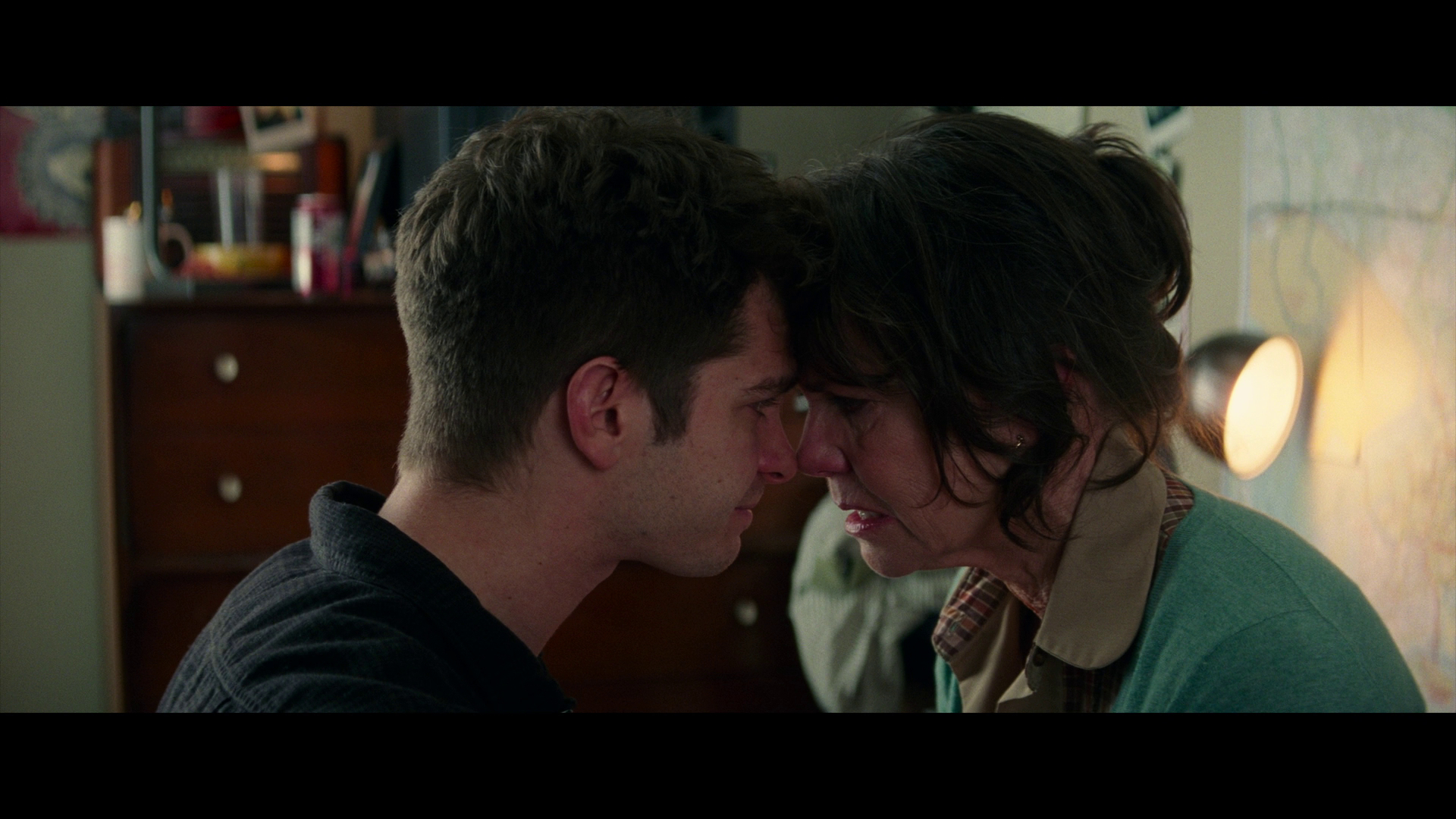 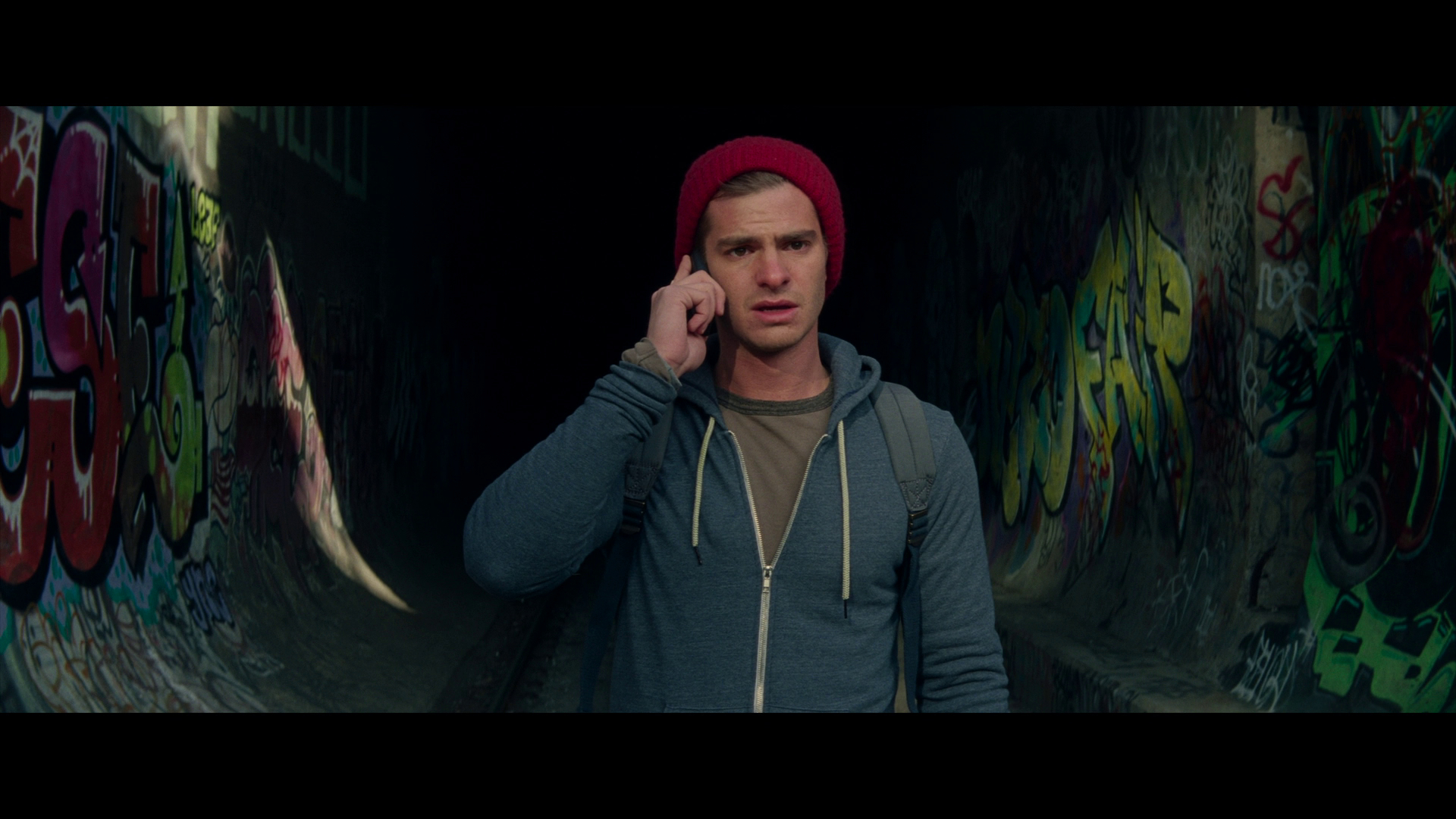 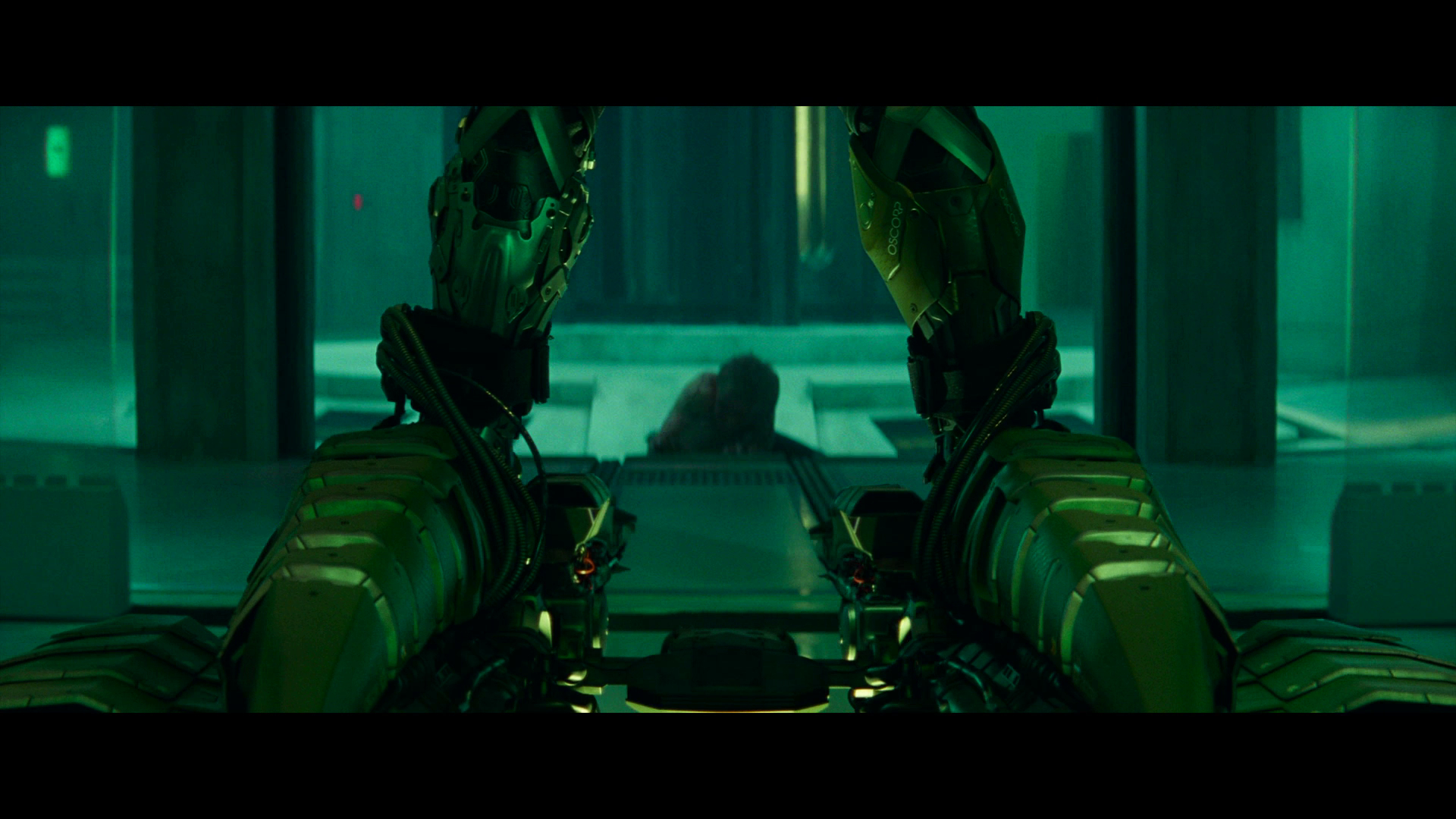 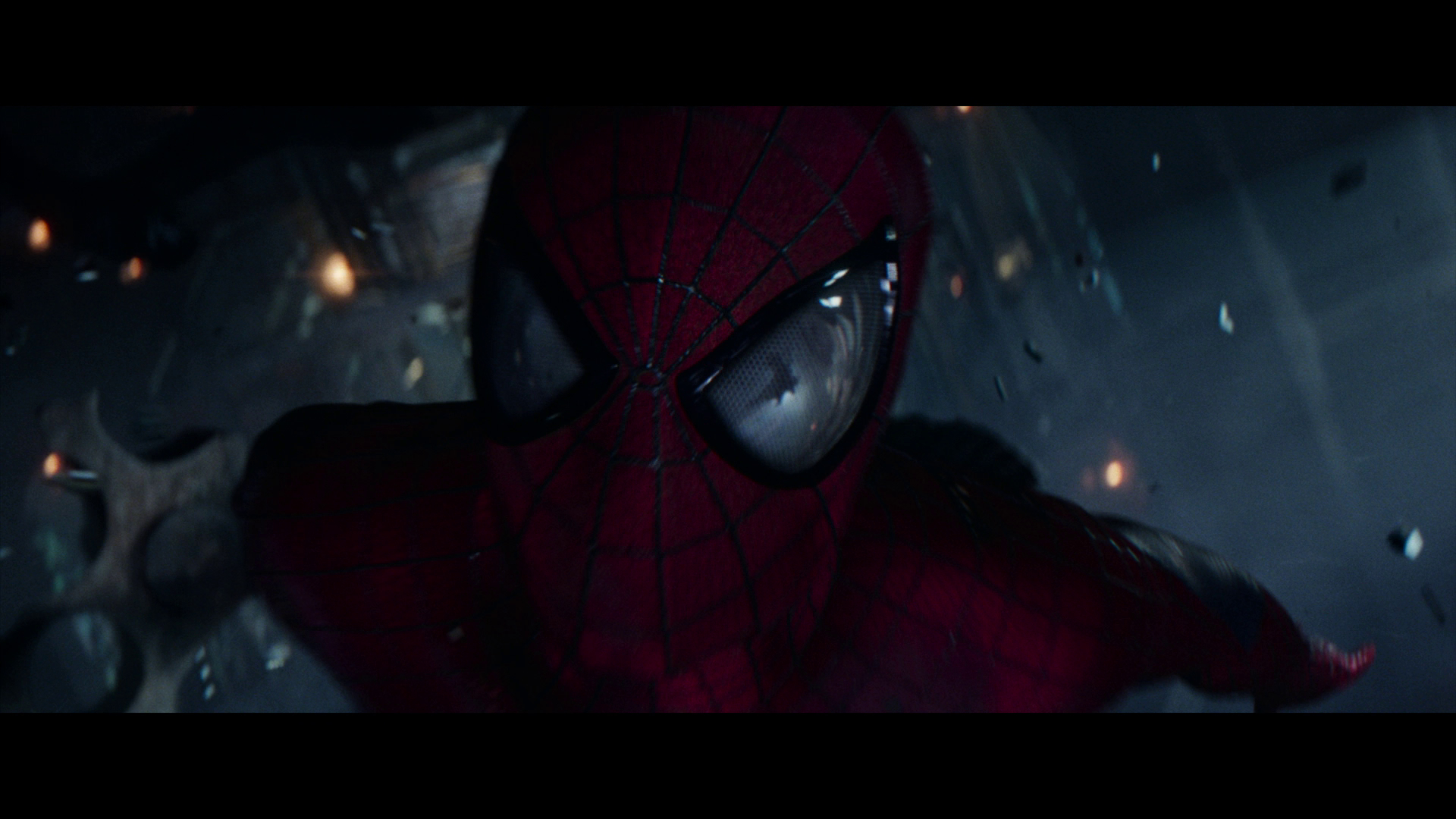 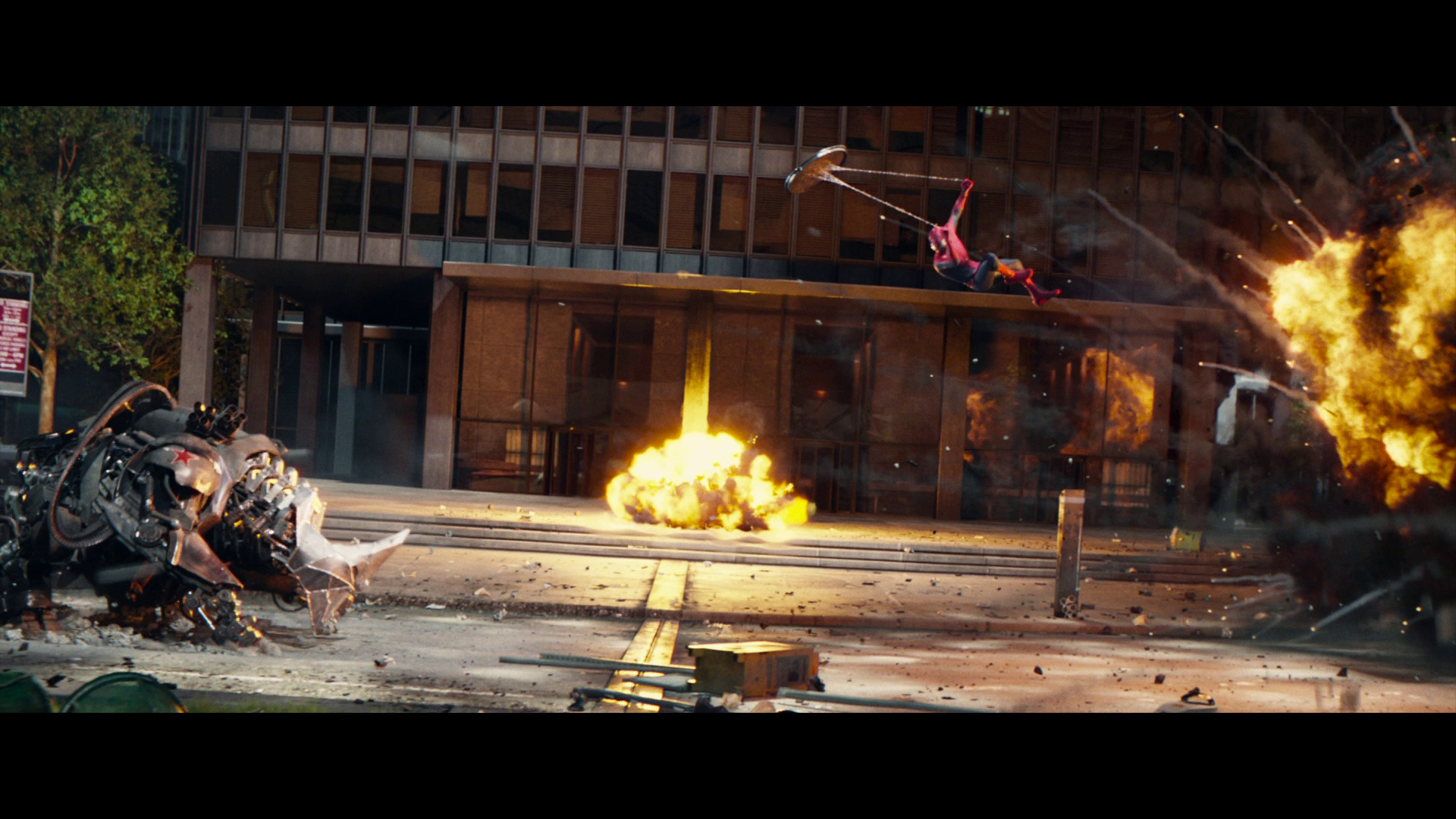