Slightly above average by late-‘50s TV Western standards, Bat Masterson (1958-61), a Ziv/United Artists show produced for NBC and starring Gene Barry, breaks away just a bit from the usual Western, though not really enough to interest non-genre fans.

The series arrived during the peak of Western shows on television, when in 1959 a whopping 26 series aired during prime time. Of those really only two stand out: Gunsmoke (then in its moody, half-hour black-and-white era) and Have Gun - Will Travel. Other shows like Wagon Train and Bonanza were equally or more popular but they were much less interesting or innovative. Wanted: Dead or Alive and Maverick were great vehicles for their rising stars (Steve McQueen and James Garner, respectively), but both shows fell into creative ruts.

Bat Masterson was a more standard, ordinary Western series, notable mainly in that its hero was a dandy, a gambler and ladies man, who more often than not used his ornate, silver-knobbed cane rather than a six-shooter when confronting the bad guys.

TGG Direct released Bat Masterson's three seasons as individual season sets during 2013. Bat Masterson: The Series offers the entire program from the same distributor at a considerable discount, with the added if incongruous bonus of six "Django" Euro-Westerns, only one featuring Django star Franco Nero (but not actually playing Django), despite his prominent presence on the box art. I was hoping that TGG might have licensed these mostly-obscure films from MGM, as they have with Bat Masterson, but no. These are basically public domain offerings; all are poorly transferred and unwatchable. Another major debit is the packaging, among the worst this reviewer has ever encountered. The DVDs are stacked one-atop-the-other on spindles and refuse to stay attached even to these. My set arrived with nearly all 16 discs completely scratched-up and dislodged. 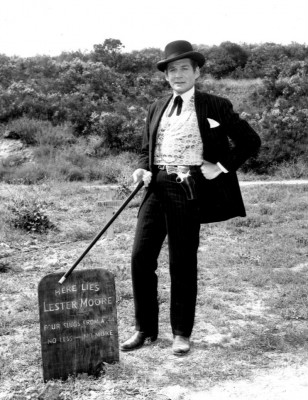 The real Bat Masterson (1853-1921) was a colorful, Quebec-born figure of the Old West, at various times a U.S. Marshal, gambler, Army Scout, sports editor and columnist, and buffalo hunter. The brother of lawmen James and Edward Masterson, William Barclay Masterson was friends with Wyatt Earp (serving alongside him at one point as a sheriff's deputy) and was involved in at least six gunfights. Albert Dekker, Randolph Scott, George Montgomery, and Keith Larsen had already portrayed "Bat" (reportedly nicknamed for his tendency to "bat" opponents with his cane) in movies prior to Barry's series, and Alan Dinehart III memorably played Bat in 34 episodes of The Life and Legend of Wyatt Earp, an ABC series overlapping Bat Masterson's run on NBC.

The series was suggested by Richard O'Connor's 1957 biography. O'Connor's agent secured the deal of the century in having the book and its cover prominently displayed during the end credits of all 107 episodes. He must have sold a lot of books this way.

The show debuted one season after Maverick, the tongue-in-cheek Western comedy starring James Garner. It was an obvious influence, with the two heroes dressed almost identically save for Bat's trademark derby versus Brett Maverick's black gambler. Both characters avoid the use of guns and violence generally, though Bat Masterson's scripts are less satirical, less playful, and more conventional.

One exception is the very first episode, which does something I've seen in no show before or since. After its climatic shoot-out Gene Barry, out of character, talks for several minutes about the historical Bat Masterson, and the real-life incident upon which the premiere episode was based. Then, he adds, there's some dispute about how it actually ended, segueing to an alternate ending to the same story, lasting several minutes more.

I didn't watch every episode, but sampling shows from each season Bat Masterson seems to get slightly more ambitious in its later years, with darker tales more in line with CBS oaters like Have Gun Will Travel and Gunsmoke.

Despite a fondly-regarded starring role in George Pal's The War of the Worlds (1953), Bat Masterson was Gene Barry's breakthrough role and with good reason: he's exactly right, full of understated charm, believable flirting with saloon girls, using his wits and brandishing that cane against various antagonists. Barry followed Bat Masterson with two more relatively popular series: Burke's Law (1963-65, and revived in 1994-95) and The Name of the Game (1968-71). At the age of 64 Barry had a late-career triumph and earned a Tony nomination starring as Georges in the Jerry Herman-Harvey Fierstein musical adaptation of La Cage aux Folles, a role as far removed from Bat Masterson as can be imagined. Before his retirement he appeared in a short-lived revival of Burke's Law (1994-95) and reprised the role of Bat Masterson for a couple of TV productions. One of these, the TV movie The Gambler Returns; The Luck of the Draw (1991), is like a Who's Who of ‘50s Western stars.

Journeymen (and women) worked on the series in various capacities, with the plurality of shows helmed by Alan Crosland, Jr., Eddie Davis, and Walter Doniger, with John Rich, William Conrad, Norman Foster, and James Goldstone among those picking up the rear. Barry was the show's lone continuing character, though sexy Allison Hayes appeared in seven shows as Ellie Winters, with Ron Hayes (no relation) turning up four times as Wyatt Earp.

Bat Masterson was shot in black and white 35mm and licensed to TGG Direct from MGM, via their United Artists library (inheritors of the Ziv library). The transfers are fairly good, though a bit softer than TGG's Highway Patrol, another Ziv show. There are 7-9 episodes per disc, and they appear complete, unedited and, thankfully, not time-compressed. A single third season episode is MIA, apparently due to rights issues. The mono audio, Dolby ProLogic II, is also fine. No subtitles or alternate audio options.

The abysmal packaging (see above) makes it virtually impossible to store the set in the conventional manner. Even handling the box with great care the DVDs constantly are dislodged and rattle around the four standard DVD cases containing them. Further, no distinction is made on the discs where seasons begin and end, with everything divided into disc number and volumes instead, though contents are described elsewhere on the box. In short, a real disaster.

The trumpeted extras aren't, really. They consist of six Django (and ersatz Django) movies: A Man Called Django (1971), Django the Runner (1966, featuring Franco Nero, but not as Django), Hanging for Django (1969), Django: A Bullet for You (1969), Return of Django (1967), and Pistol for Django (1971). On two discs, most are in 4:3 letterboxed format but, even at that, the transfers are quite poor and basically unwatchable, even on small monitors. Several of these films are available with better transfers elsewhere.

Despite the terrible packaging and all but useless extra features, it's still nice to have the entire series, mild though it is. Recommended.