Slight Case Of Larceny, A 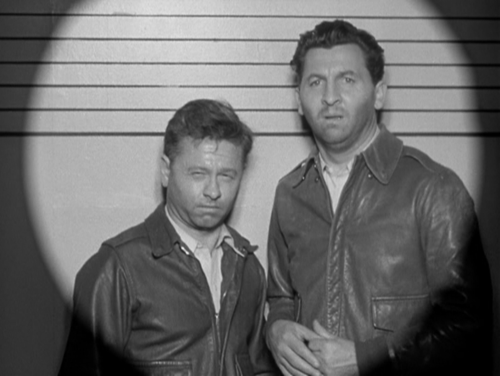 The 1953 comedy A Slight Case of Larceny has an interesting premise: two guys open up a gas station and start stealing gas so that they can stay competitive. It is anchored by two energetic performances by Mickey Rooney and Eddie Bracken. It even touches on themes of greed and the broken nature of capitalism in a way that is surprisingly resonant with the world's current economic situation. Here's the catch, though: A Slight Case of Larceny is not very funny.

A fully committed Rooney plays a conniving would-be Rockefeller with the unfortunate name of Geechy Cheevers, while Bracken plays Geechy's sweet, gullible war buddy Freddy Clopp. Geechy is clearly a believer in faking it till you make it, since he buries Freddy under a pile of B.S. about all the big money he has been making since they last saw each other overseas. He easily manipulates Freddy into mortgaging his home so the two of them can start up their own service station, to the consternation of Freddy's wife Emily (Marilyn Erskine). After the pair installs a few illegal stop signs right in front of their place, they end up doing a brisk business.

They do so well that it attracts the attention of a deeper-pocketed competitor, Mr. White (Douglas Fowley), who sets up across the street and offers incentives both financially and aesthetically. In other words, White sells his gas below cost, just to drive Geechy and Freddy out of business, and he does it with the help of sultry attendant Beverly Ambridge (Elaine Stewart -- yowza!). Now comes the larceny. After learning from some workmen that a gas refinery pipeline runs right under their place, our boys decide to do a little digging, tap into that pipe, and steal some of that gas.

While the film at least pays lip service to the idea that what Geechy and Freddy are doing is illegal, the attitude of Jerry Davis's script essentially is that you have to be some kind of crook to get ahead in the modern world. Geechy and Freddy's scheme is a drop in the bucket compared to what big-time financiers get away with all the time.

That's kind of a radical notion to be slipped into a broad comedy, so unsurprisingly these concepts are not handled with great sophistication. Geechy, who often comes off as a proto-Jordan Belfort but without the luck, is shown at one point telling a bedtime story to Freddy's son about the adventures of... (wait for it)... J.P. Morgan. Later, when Freddy convinces Geechy that they should turn themselves in, the desk sergeant to whom they confess seems unsure exactly what crime has been committed. These are smart ideas, but the script doesn't provide sharp punchlines to back them up. I found myself muttering "Huh... interesting," more often than I laughed out loud. 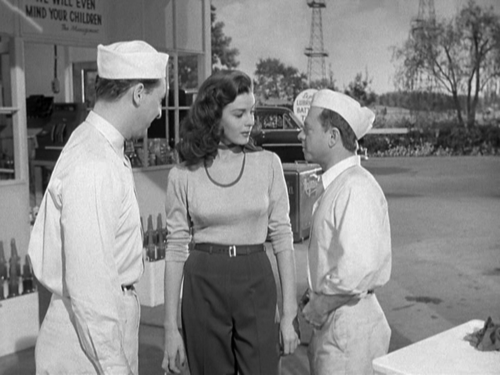 Director Don Weis, who went on to direct nearly 200 episodes of television (including more than a quarter of the series Ironside), maintains a good pace and never lets the energy flag during the film's trim 71-minute running time. Unfortunately, he can't seem to figure out where the jokes should land either. An extended sequence where Geechy tows Freddy in a delivery truck that is loaded full of gas and has no brakes -- which leads to Freddy sloshing all over the road in what is essentially a road missile -- should theoretically be the half-hilarious/half-frightening centerpiece of the film. But instead of being a showstopper, the scene plays as mildly amusing, then anticlimaxes with a low-key bit where a motorcycle cop pulls them over and smokes his cigarette in dangerous proximity to the truck.

The lack of laughs is definitely not the cast's fault. Bracken is the same charming fool he was in those Preston Sturges classics Miracle of Morgan's Creek and Hail the Conquering Hero a mere nine years before this film. Meanwhile, Rooney pulls off the slightly trickier feat of being charming, deluded, and devious without leaning too hard on the latter two. Marilyn Erskine does her best with a fairly thankless role; even though Freddy's wife Emily is essentially always right, she mostly just appears in scenes to scold Freddy, which makes her scenes a drag. And Elaine Stewart... may I reiterate: yowza!

Rooney and Bracken were both in a career downturn when this film was made, and soon they would both turn to television to make their living. (Apart from some bit cameos and animation voice-overs, Bracken wouldn't appear in a film for another thirty years, when he popped up at the end of National Lampoon's Vacation.) One imagines that if they had a little more clout, these fellas could have passed on such middling material. Instead, they took this job, and we're left with a film that reveals sporadic glimmers of imagination and humor, but mostly just putters along, fueled by the goodwill these actors accrued in other, better movies. 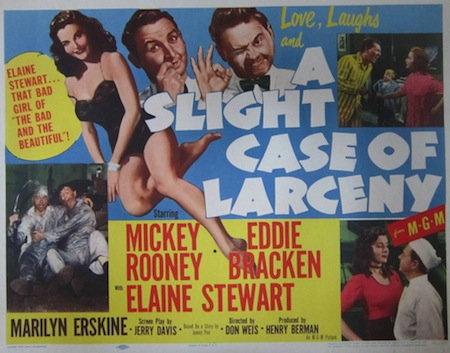 The DVD
A Slight Case of Larceny comes to us via a manufactured-on-demand DVD-R, as part of the Warner Archive Collection.

The Video:
There are occasional issues with the film elements, like scratches, dirt, and damage, but this standard 1.37:1 transfer is definitely on the higher end for one of these MOD releases. I spotted very little video noise to interfere, and there's a good range of contrast, even if this isn't the most visually stylish of movies.

The Audio:
The Dolby 2.0 mono audio mix is in very good shape, with no noticeable hiss, pops, or distortion. It's not going to blow the roof of your home theater, but it does the trick.

Final Thoughts:
A Slight Case of Larceny is a frustrating mix of engaging performances, surprisingly smart concepts, and lackluster follow-through. If you have a fondness for Rooney and Bracken, you might still have a good time. For them alone, I say Rent It. 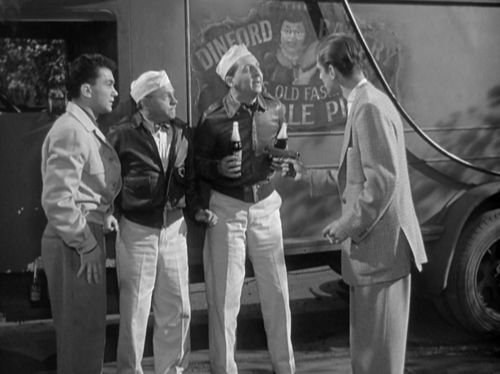