Nyaruko: Crawling with Love (Haiyore! Nyaruko-san) is an anime series based upon a series of Japanese light novels. It has been similarly adapted into a manga series and into a video game.  This is sort of  the common result of a lot of such adaptations and this series isn't one to really break from the mold in that regard. The series is loosely inspired by the fiction works of H.P. Lovecraft, which conceptually is utilized as the starting point for the series.

The story begins with a boy named Mahiro running away from a scary looking monster who is actually an alien creature who was trying to kidnap him to sell the star of a intergalactic alien soap opera. Mahiro is rescued from this alien by a silver-haired girl named Nyruko, who is an alien of the species Nyarlathotep who has taken on the form of a human girl and who was sent from space to protect Mahiro from the evil aliens. Nyruko is an anime-obsessed otaku who is more akin to a typical anime fan than to an alien. Over the course of the story, the two end up fighting off other alien baddies and meet other similarly human-form characters who wind up joining up with them and crashing at Mahiro's house. The story essentially focuses upon the oddball, goofy scenarios of the characters amidst the scenario of the girl being an alien from space, and the rest is simple run-of-the-mill anime shenanigans.

The animation style is well-produced from a technical standpoint with good attention to the details of the art. The backgrounds and overall environmental landscapes impress, and the character designs are sufficient for this type of show. However, the art is still bland and is unfortunately too generic to stand out from the crowd of other anime series much. It's too uninspired. There is no sense of originality here. Yet somehow the art seems to be the best element of the entire production.

Stylistically, even though the art is sufficient enough, there's an odd approach to the show that doesn't mesh well aesthetically or creatively in the way it blends together a dark, menacing, or doom and gloom vibe of the alien intruders with the bubble-gum cheerfulness that resides in the other series characters and general scene-to-scene dynamic. This odd combination doesn't really work the way the artists intend and it feels out of place and detrimental to the style of the show succeeding.

The series writing is the weakest point of the show, and by relation to the writing craft on display the characters developed throughout this series are similarly underwhelming. There's an issue in any series if it's hard to connect to or enjoy the characterization of even a single character in the storyline.  Just one character that is somehow relatable or believably conceived in script can go a long way. Nyaruko: Crawling with Love lacks any interesting or likeable characters.

The story is by the numbers and generic. This series does not feel original in the slightest. The writing is weak, in part, because it presumes that it is successfully working out to be a comedy series. Yet the show is never funny. The characters behave in a Three Stooges sort of way and nothing about this translates well with this setting and with the characters and their interactions.

The plot is one where in each episode something is happening with an evil alien encounter and random goofiness happens at the same time. This just doesn't work too well. To make things more problematic, the show is constantly tossing out pop-cultural references to other anime series, including the likes of gigantic phenomenon's like Pokemon and One Piece, but these references feel both jarringly out of place and seem to serve as a reminder that writing-wise Nyaruko: Crawling with Love is seriously lacking its own voice and so it instead references other, better series.

The direction is fairly typically over-the-top and the style seems all over the place with a quick pacing which is detrimental to the series ever seeming to grasp onto something more interesting or dramatic. It just jumps around from one odd element to another and relies on many  different  typical anime tropes, including the introduction of Nyaruko to Mahiro's school as a new student who causes a lot of commotion for Mahiro along the way. This feels like anime 101 and it's not done in a way that causes the story to feel more interesting or successfully comedic.

I wish I had more positive things to say about this series because it's a bit of a downer when yet another anime is released which I find to be essentially mediocre and uninspired, but that's the best way to sum up Nyaruko: Crawling with Love: mediocre and uninspired. It falls flat as an anime in almost every way.

Nyaruko: Crawling with Love is presented on Blu-ray in its original 1.78:1 televised aspect ratio and the 1080p High Definition presentation is uniformly excellent with good color reproduction, fine detail, and clarity that makes this a mostly excellent presentation of the show. Fans will not find this element disappointing.

Presented in lossless uncompressed 2.0 stereo audio, Nyaruko: Crawling with Love has a strong Japanese language presentation with good English subtitles. Clarity is strong with clean vocals, good dialogue reproduction, and a nice ambiance that includes strong implementation of this series music. This is a notably good lossless audio presentation that is a good fit alongside a similarly stellar video presentation. 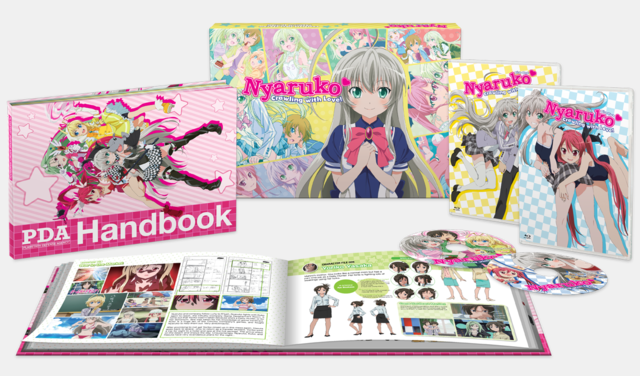 NIS America's best extra is the Premium Edition packaging with comes with a gorgeous art-box and artbook with more details, information, and sketches relevant to the series. If you do happen to like the show, the Premium Edition is of stellar print quality and has once again been put well together by NISA.

H.P. Lovecraft probably wouldn't be too pleased with this loosely inspired by anime series. It's not intelligent or involving. Instead, it's a rather generic anime series about fighting aliens and getting into typical zany scenarios with the over-the-top characters. I didn't care for this one at all, and don't recommend it in the slightest. However, for those who are fans, know that NIS America once again delivers a stellar package from a PQ/AQ and packaging perspective.