I Spy: The Complete Series 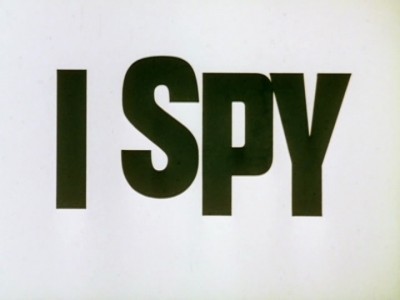 
The Show
In a world where the President of the United States of America is a black man, the idea that a TV show co-starring a black man could be a culture shock is a foreign one. But that was just the case in 1965, when NBC paired Robert Culp with rising comedian Bill Cosby to create I Spy, another entry in the spy craze sparked by the success of the first three James Bond films. The idea of a black man as a lead actor in a TV drama was such an issue in the south that some stations refused to air the show. However, their prejudice didn't stop the series from becoming a hit, as it ran for three seasons and 82 episodes before becoming a syndication staple for decades.

Culp played ladies' man Kelly Robinson, while Cosby was the more studious Alexander Scott, and together they were a pair of American spies, taking on whatever assignment came up next, be it babysitting a high-profile assassination target, preventing global political calamities or helping allies defect from America's Cold War foes. The pair traveled the world under the cover story that Robinson was a globe-trotting tennis player, with Scott serving as his trainer; aliases that let them roam freely (though this element is rarely a major part of the show (nor does it often make any sense.)) The exotic locales were not just story settings either, as part of what made the show so unique was that exteriors were shot on location all over the world, including China, Japan, Mexico, Italy and Greece. 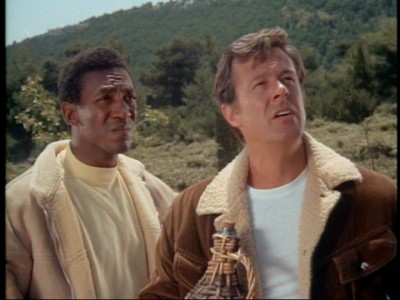 Watching the show, the actual adventuring, which features lots of investigating and fist-fights, is often somewhat lame, as the brawling is usually awkward and terribly fake, the supporting performances stilted ande the on-the-job portions tend to be boring or overwrought, complete with melodramatic music stings. A good editor would have a chance to bring these stories in at a flat 30 minutes, rather than the slow-paced 50 they currently sit at. Comparing the amount of story you get in a commercial-free episode of True Detective and the amount of travelogue footage and padding this show delivers in approximately the same amount of time does not work in I Spy's favor. In one episode, "The Seventh Captain," six excruciating minutes go by without a word of dialogue, nor much action either, while the climax of "Apollo" takes forever to unfold. It's not as if these are some sort of clever, wordless moments. They are just plain sloooooooooooow.

On the other hand, any moment involving interaction between Culp and Cosby can't last long enough. While they do get into some deep, introspective chats, some of their conversations are so fun and energetic that there's no way they weren't improvised. When Cosby rips Culp's shirt off in order to make wicks for a fire at one point, the back and forth between them was as dryly funny as any show in television's history (and it seemed like Culp nearly broke into laughter.) Though the series is primarily an action drama, the humor they display (with the gadabout nature of Culp's character meshing well with Cosby's witty responses) is a welcome respite from the otherwise serious goings-on and make for a more well-rounded series. Culp plays Robinson as a bit of a suave buffoon, acting the fool on the surface, while Cosby's the quiet, contemplative, intellectual hero, and the performances remain as impressive today as they were when they garnered the duo a combined six Emmy nominations in three years and three straight wins for Cosby as lead actor.

One of the great things about I Spy, especially in an age when every drama is either serialized or semi-serialized, you can pick any episode from the series' run and enjoy it on its own (with the possible exception of the second half of season two's two-part "To Florence, With Love.") Other than that, the show offers up 80 mini movies that can be watched in pretty much any order. The only thing you might notice is a variance in the quality of the episodes, as the later episodes feature the show's strongest outings, which coincidentally were also some of the more unique storylines, like the Don Quixote-inspired "Mainly on the Plains" (featuring Boris Karloff as a loony professor), an episode involving Scott's elderly mother, set in his hometown of Philadelphia ("Cops and Robbers") and "Bet Me a Dollar," a cat-and-mouse chase with deadly potential between Robinson and Scott (a concept smartly revisited in "Tag, You're It.") One of the most daring of the entire series comes late in the game, with the third-season "Any Place I Hang Myself is Home," a bit of a dark stunner, as it centers around a suicide attempt by Scott. Its exploration of deeper ideas than the average spy series, while telling what's essentially a Rashomon-style origin story, is a perfect example of how the show managed to juggle multiple themes and push the boundaries of network TV.

Though the performances hold up well, and many of the stories still work, this series is definitely of its time, as women are almost unanimously objects to be desired and possessed and referred to frequently as "chicks" (with a surprising amount of accepted domestic abuse (watch our heroes stand by as women are slapped across the face, doing and saying nothing about it.)) Many episodes end with Robinson celebrating a successful mission by nabbing himself a new lady friend, though Scott is more of a romantic, falling hard for several woman, but kept single by the job.) There's certainly an entertainment value in the way Robinson falls all over himself to impress women, and the way that behavior delineates the difference between the two men, but it's hard to appreciate such era-specific sexism (especially with the #YesAllWomen situation so fresh.)

Politically, the show is obsessed with Communism, as the pair are in constant battle with the Chinese and Russians, along with all manner of ethnic bad-guys, both home and abroad. This results in an unfortunate amount of cross-race portrayal (known today as "yellowface" or other distasteful terms.) The diversity of characters does allow for a broad cast of familiar actors though, including Eartha Kitt, Leslie Uggams, Cicely Tyson, Philip Ahn, Jim Brown, James Hong, Ricardo Montalban and Gloria Foster. The guest role roll continues on with names like Martin Landau, Sally Kellerman, Gene Hackman, Carol O'Connor, Joey Heatherton, Jim Backus, Ron Howard, Peter Lawford, Norman Fell, Vincent Gardenia, Don Rickles, Wally Cox, Richard Kiel and Michael Rennie, while Star Trek fans can look for George Takei, Walter Koenig, Diana Muldaur and Roger Carmel. Though a few earned Emmy nominations for their appearances, it was impossible for them to top the impressions made by Culp and Cosby. 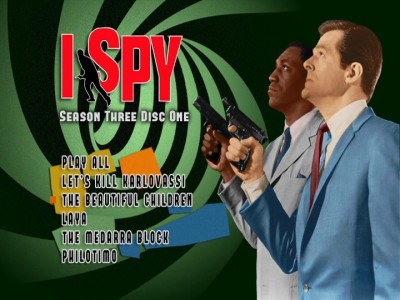 The DVDs
The show's entire 82-episode run arrives on 18 DVDs, which are packed into a trio of clear, single-width keepcases, featuring double-sided cover art with episode listings and a pair of double-sided trays (along with hubs inside the covers.) The cases are held in a sturdy, heavyweight slipcover. The DVDs features a static, full-frame menu (following an intro taken from the show's opening titles) with options to play all the episodes on the disc or select shows. There are no audio options, nor are there subtitles or closed captioning.

The Quality
The full-frame transfers on these DVDs look their age, as the color, though well-saturated, won't blow anyone away with its vibrancy (or consistency, though that may be a source problem), and there's a persistent presence of dirt, damage and jitter, especially when it comes to any stock footage or on-location film, particularly in the first season, where things look rougher than they do in the later seasons. Despite these flaws, the show's overall presentation is solid, with a decent level of fine detail and no notable compression issues. It certainly looks better 50 years since they first aired than many other shows not given a true clean-up.

The Dolby Digital 2.0 audio tracks simply double-up the show's original mono presentation, but there's nothing to really complain about with the sound, as the show's original music scores are strong and clean, while the dialogue is nicely intelligible, if sometimes a touch thin, and sound effects are sufficient throughout. Any sound recorded in-studio is far better than that heard in exterior scenes.

The Extras
When episodes were released on DVD several years back, as the Robert Culp collection, they included insightful commentaries by Culp. Unfortunately, those tracks remain trapped on those out-of-print discs, as the only extra included in this set is a 20-page booklet that includes a short essay about the show and an episode guide with trivia about many of the episodes (as well as some beautiful artwork that should have been on the front of the box in a just world.) It's certainly welcome but losing those commentaries is frustrating. 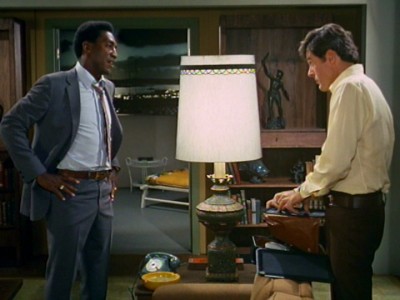 The Bottom Line
I Spy forever holds a spot in history for its pioneering take on race relations, but it's got more going for it than just being first to the party, as Cosby and Culp's performances are the definition of chemistry, and there are a number of genuine gems amongst its 82 hours of spy adventures. On the other hand, there are plenty of moments you'll have to battle through to get to the good stuff, and though the quality is solid, there are no real extras, so this is probably overkill for casual viewers. If you have good memories of the show, the give-and-take between the leads remains quite strong, but finding a way to sample the show first is recommended for most.