Heaven Is for Real

In 10 Words or Less
If there's paradise beyond this world, count me in! 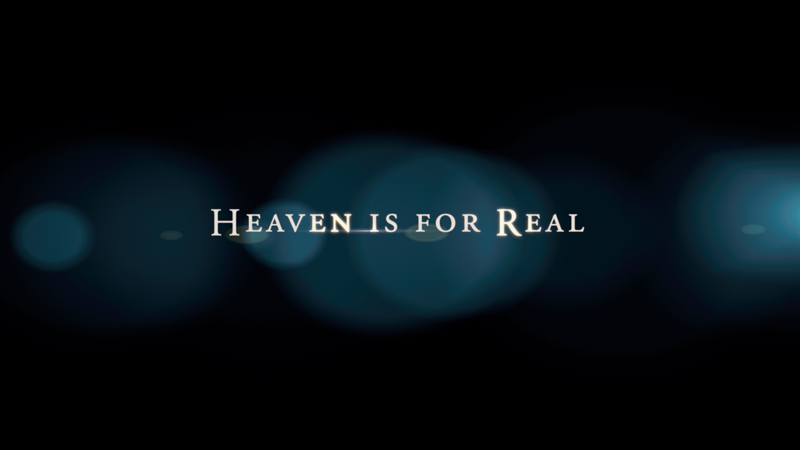 
The Movie
The idea that there is a place, after we leave this earth, a magnificent world of grandeur and peace is nothing short of enticing. As someone brought up in the Roman Catholic faith, we are taught that heaven is a glorious realm where St. Peter stands at the "pearly gates" to welcome those who have lived a righteous and good life on earth. The flip side being the flaming bowels of hell where the souls of those less desirable are tossed to burn for eternity. Whether in the throes of a near-death experience, terminal illness or life-changing situation, many have told stories of seeing a bright light or feeling a warmth come over them as they knew the moment of death was imminent. I myself had a somewhat similar experience nearly 5 years ago when I suddenly and unexpectedly went into liver failure. There were many ups and downs during my stay in the ICU, and on one particular night after my family was told there was nothing more anyone could do for me, I remember lying alone in my bed and feeling surprisingly peaceful and relaxed, a far cry from what I was actually experiencing. Granted, I was on pain medication, but I clearly remember sensing the presence of my beloved, yet deceased Grandmother on the edge of my bed, with her gentle words, "It's ok, it's ok," lulling me to sleep. Thankfully, I would later recover from that experience, but it did forever change my perception of standing at the moment of death and what it would be like.

Based on Todd Burpo's best-selling Heaven is for Real: A Little Boy's Astounding Story of His Trip to Heaven and Back Randall Wallace and company have created a beautiful adaption of what his young son Colton experiences when he visits heaven during a medical crisis. What Colton talks about when he awakes from surgery will test the faith of his parents, family and friends and ultimately change their lives forever.

With faith and family being such an integral part of Todd (Greg Kinnear) and Sonja (Kelly Reilly) Burpo's life, we see their vulnerability as Colton's experience unfolds. As a pastor, coach and volunteer fireman in their small Nebraska community, Todd is witness to the highs and lows that life has to offer, suffering some of his own medical crisis early on in Colton's (Connor Corum) life. For Sonja, her life is her children and her community. For Colton and his sister Cassie, life is all about having fun and being a child. 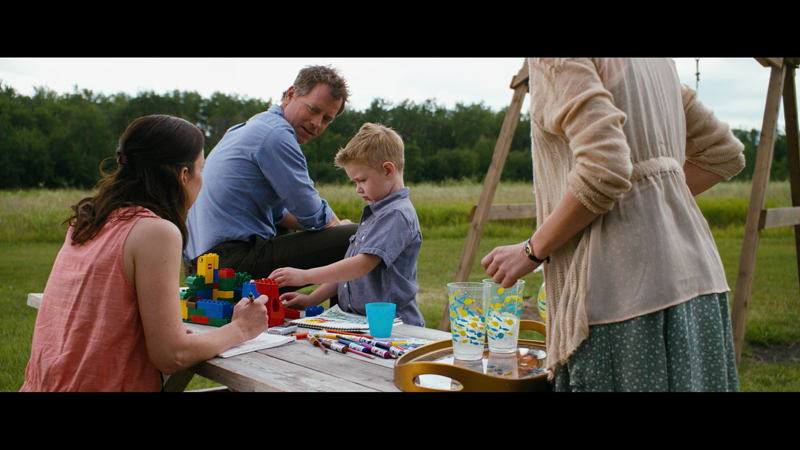 Unfortunately for the Burpos, the struggling economy has them doing their best to make ends meet. As the owner of a garage-door business, Todd is understanding and ammenable with those in his community, who often at times are struggling themselves. Wanting to keep Sonja at home with the children, Todd is reluctant to have Sonja find work to help supplement their ever-dwindling family savings.

Todd's "person," as we'd call it these days, is his best friend Jay (Thomas Haden Church), a fellow church member, fireman and the town Bank President. Very familiar with Todd and Sonja's financial struggles, Jay tries to offer advice, though it often falls on deaf ears.

Once Colton's heavenly experience is brought to light, church and community members alike begin to question the direction in which Todd is leading them. One such skeptic is Nancy (Margo Martindale), who, with the devastating loss of her own son during military battle, is compassionate towards the Burpos but resentful towards God for saving Colton and not her son.

Kelly Reilly does a fine job of portraying Sonja Burpo, though there's something quirky about her acting style that I find rather annoying. Her chemistry with Greg Kinnear is believable and well-rehearsed, but for the life of me, her facial expressions make me want to not like her. She's currently starring in the ABC drama Black Box, where yet again I find myself frustrated when I watch her. She's new to me, so my opinion is based on my compact knowledge of her.

The believability of Kinnear's Todd Burpo character is a testament to his admirable acting ability. The first movie I ever watched featuring Kinnear was As Good As it Gets. His raw acting enabled me to see deep into his Simon Bishop character and truly feel his struggles and anguish. This was true this time around in Heaven is for Real. As he is sitting alone, praying to the God that he has devoted his life's work to, Kinnear is outstanding, as I feel he more than sufficiently captures Todd Burpo's frustration, insecurity and anger over what the future might hold.

As always, I was delighted to see Thomas Haden Church of Wings fame coming through in such a dramatic role. I'm used to seeing the funny, quirky and ever imposing "head in the clouds" type of character from Church, but I was very happily surprised to see him in such a down-to-earth, straight-shooting role. He made me want to really like his character. Jay is the best friend everyone dreams of, always watching out for your best interest and supporting you no matter what.

I felt it necessary to mention the performance of Margo Martindale as Nancy Rawling because she gave such a convincing representation of the pain, despair and angry frustration I imagine a mother to feel after losing a child in the greatest act of bravery. For me, the pinnacle scene for Martindale was at the cemetery when she comes upon Kinnear's character at her son's gravesite. As a member of the church board, she was reluctant to fully accept that Colton Burpo had visited heaven, been comforted by Jesus and sung to by angels, when her own son was killed and taken from her, never to return again. I found it touching and confusing at the same time, that she get some form of resolution to her feelings at the end of the movie. She did a great job and I like that she's tough when she needs to be, yet breakable and human all at the same time. 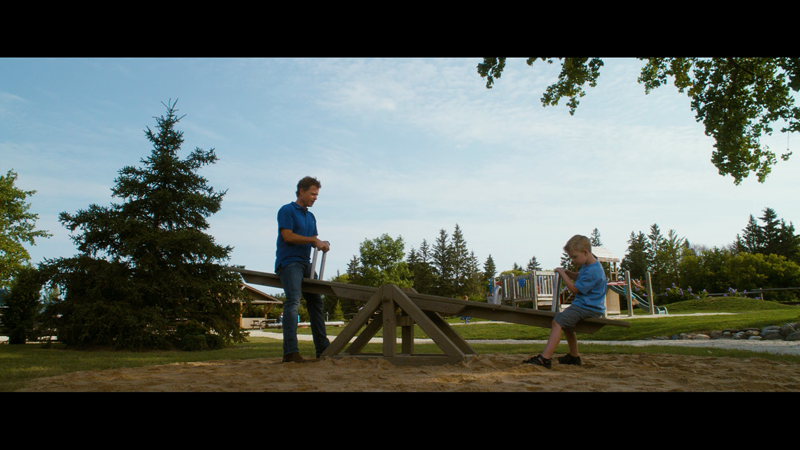 The Quality
With bright colors and sharp images highlighting the picturesque Nebraska landscape (the film's location is actually Winnipeg), you can sense a true over-indulgent aura of heaven throughout this production. The image is spotless down to the tiniest blade of grass. The color is appropriate for the tone of the films. When necessary, a soft and dreamy look is used, but for the most part the colors are stunning. There were no concerns with digital distractions.

The DTS-HD Master Audio 5.1 track on this set do a stellar job of fully immersing the viewer, with the dialogue sounding clear and crisp from the front of the room, while the surround speakers have plenty of background action such as fire engine sirens or passing cars, with sound effects and soft music filling the side and rear speakers. For the most part, dialogue was crisp and clear, with some questionable mixing decisions during key dialog moments.

The Extras
This movie included a fair amount of special features, with two exclusives to the Blu-Ray. Though not a huge range of extras, I felt they were enjoyable and worth the time to watch.

There are six deleted scenes (8:51) in this set with a play-all option is included. These deleted scenes were fine, with most entirely cut from the final feature. They range from 40 seconds to 2:26.

What does heaven look like? Are there clouds and angels, rainbows and starbursts? These were questions that the writers, creators and special effects team were faced with when depicting what heaven looked like to young Colton Burpo. In the 4:24 "Creating Heaven" (BD exclusive) writer/director Randall Wallace discusses working with Special Effects Supervisor Dan Levitan to create an alluring vision of heaven, keeping with the innocence and simplicity of that which is seen through the eyes of a child.

Another BD exclusive, "The Making of Heaven is for Real" (13:08), takes the viewer on a journey from the moment the adaption was developed, to the production location in scenic Winnipeg and finally to the unfolding of a storyline that some might feel too unbelievable to be true.

In "Colton Goes to Heaven" (4:17) Sonja and Todd Burpo, along with a now older Colton, talk about their lives leading up to Colton's visit to heaven and how he was able to give vivid details about looking down on his surgery, the doctors, his parents, Jesus and those associated with his journey to that safe, secure, peaceful and inviting place high above the clouds.

Finally, there are several previews worth giving a watch once they come to theaters or video, along with a code for an Ultraviolet stream of the film. 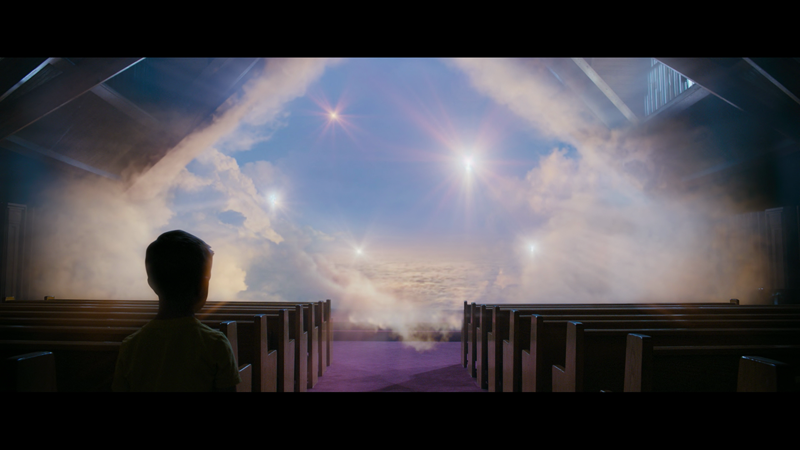 The Bottom Line
This movie is definitely worth watching, though it was a slow start in the beginning, taking nearly 25 minutes to get into the actual storyline. For those believers in the afterlife, it satisfies the burning desire to paint a picture of what you'll see when your time on earth is up. For those who are not believers in the afterlife, it's a beautiful story of a young boy who beat the odds and comes through a life threatening ordeal to tell his story. You may find yourself questioning your own faith and beliefs while watching a movie, or you may just sit there and think it was a well depicted story featuring an adorable four year old (who by the way was played by a 6-year-old!) Either way, it warms the heart and soul!