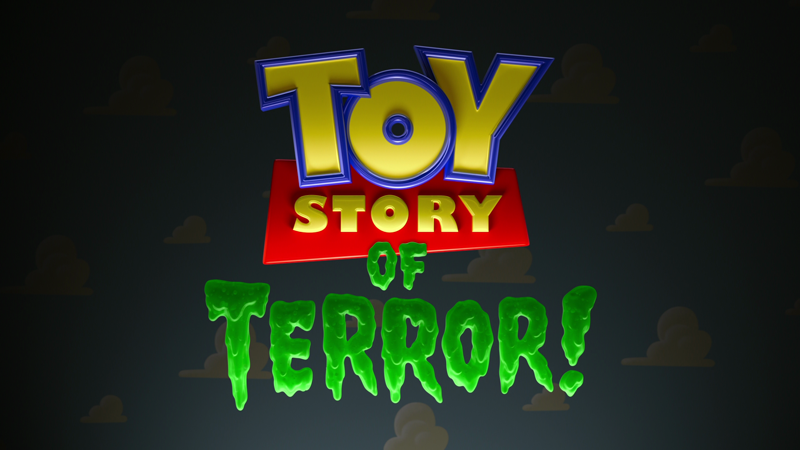 
The Movie
Toy Story has one of the more interesting runs in movie trilogy history. The first film was a work of genius that required no sequel. Disney, obviously seeing the dollar signs available, pushed for a direct-to-video second movie, which was saved from ignominity by Pixar's John Lasseter and his team, and the results were excellent. Then, Disney, seeing the possibility of losing Pixar to another studio, started production on a third film, with a new start-up animation group. This time, the sale of Pixar to Disney, which installed Lasseter as the new head of Disney animation, stopped another potential fiasco, and yet again, the studio delivered a tremendous film--the best one yet.

Since then, the world of Toy Story has been revisited a few times, mainly in the form of shorts that ran before other Disney films, but also in a 2013 holiday-themed TV special, Toy Story of Terror (with another Christmas edition scheduled to air in December of this year.) The Halloween adventure (though in no way tied to that night of trick or treating) sees most of the latest cast return (sans Pixar lucky-charm John Ratzenberger's porcine Hamm) as the toys take a trip with their new owner Bonnie, ending up at a roadside motel on a dark and stormy night. Toy Story 3's Mr. Pricklepants (Timothy Dalton) helps turn the 22-minute short into the Pixar version of Scream, as he explains the conventions of horror films as the group experiences them, with each character disappearing, one by one. 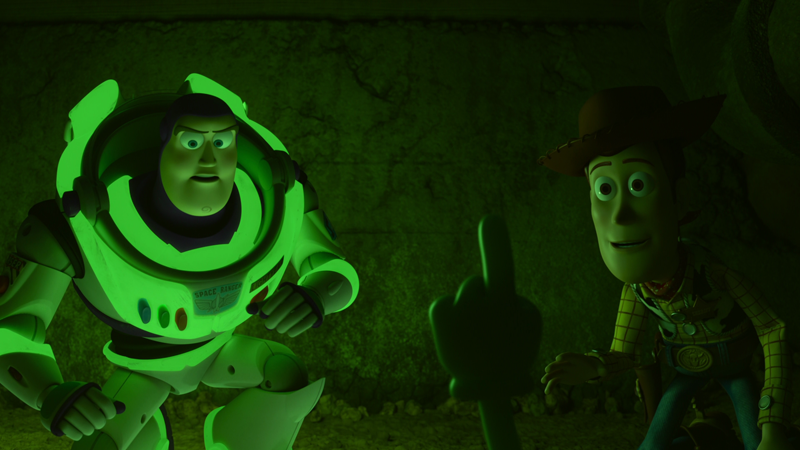 Though the short film has plenty of humor and lightheartedness in it (one joke involving a new toy landed particularly hard), it captures the feel of a horror film particularly well, delivering a number of scares, while also exploring some emotional angles (akin to the issues at the core of Toy Story 3.) That's probably the most impressive thing about this film: it manages to hit the same chords as the trilogy, building on what we know of the characters, rather than just transplanting them into a new situation and playing out the same tropes. The story works well also, with just enough plot to fill out the short run-time, while also taking full advantage of the need for commercial breaks by offering a trio of solid cliffhangers (and in a terrific movie, you can actually watch the film with added commercials, maintaining the pacing [see The Extras.])

The main cast is as comfortable in their parts as you'd expect from a team that's been at this now for nearly 20 years, yet everyone's doing a great job at it, including a more recent addition like Kristen Schaal (as Trixie the Triceratops). There's also a number of new characters introduced in this film that are a hoot, however to reveal much about them is to ruin the film if you haven't seen it. That said, be on the look-out for fun roles for Carl Weathers (who integrates unbelievable well into this universe), Kate McKinnon and Ken Marino. 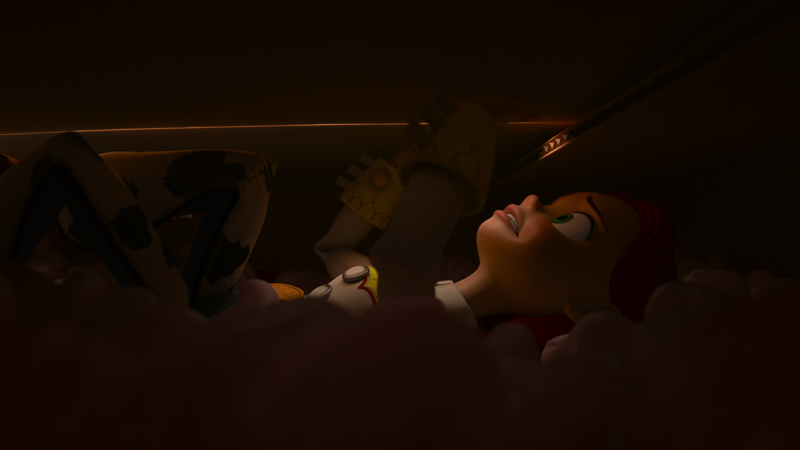 The Disc
Toy Story of Terror arrives on a Blu-ray disc in a standard BD keepcase (which is held in an embossed keepcase ) The disc features an animated menu offering the option to watch the film, select chapters, adjust languages and check out the extras. Though there's not much animation, let it run while to enjoy the audio. Audio options include English DTS-HD Master Audio 7.1 and 5.1 tracks, along with English Dolby Digital 2.0 and 2.0 descriptive audio, as well as French and Spanish DTS-HD Master Audio 5.1, while subtitles are available in English SDH, English, Spanish and French.

The Quality
Delivered with a 1080p, AVC-encoded transfer, Toy Story of Terror looks tremendous, with the level of fine detail and solid black levels required for this darker-toned adventure. The scenes that show off Buzz Lightyear's glow-in-the-dark paint accents are particularly impressive, though color is great across the board, and there are no concerns about digital distractions. Just another beautiful presentation from Disney/Pixar. Ho-hum.

The 7.1 DTS-HD Master Audio track is just what a movie like this needs, as the music, atmospheric effects and directionality really benefit from the added channels, crafting just the right horror-movie feel. This wasn't a theatrical release, so a blowout presentation wasn't likely in the cards (or perhaps necessary) but what is here sounds terrific, with clear, crisp dialogue and a strong low-end, which also helps with the theme.

The Extras
Considering how short the main feature is, it only makes sense for Disney to round out the package a bit, and thankfully, unlike some other animations that shall remain nameless, they have, starting with an audio commentary from director Angus MacLane, director of photography Ian Megibben and editor Axel Geddes. They don't have a lot of time to chat, but they offer a ton of thoughts on the film, often focusing on movie references being made, the inspiration for a moment or a scene or the animation effort that went into the movie, while also helpfully sharing some easter eggs you might not notice otherwise.

Though the feature is short, there are shorter Toy Story Toons out there, and they are included here. Hawaiian Vacation (5:53) (also available on the Cars 2 Blu-ray), Small Fry (7:06) and Partysaurus Rex (6:34) are all excellent additions to the franchise (unlike the Cars Toons.) Hawaiian Vacation puts the spotlight on Barbie and Michael Keaton's insane take on Ken, while Small Fry takes a peek at the world of fast-food toy giveaways with hilarious results (even if it's pretty light on plot, while heavy on ridiculous toy concepts.) The best of the bunch, mainly from a technical perspective, is the Rex-focused third entry, which is an animated version of a rave, set in Bonnie's bathtub. It's beautifully done, and just feels fun to watch. thanks in part to the music by BT. Even if you have Hawaiian Vacation on Blu-ray though, this one, and the other two, feature audio commentaries, all three of which are worth a listen. Here's the breakdown:

For more insight into the film's production, there's "A Team of Specialists" (11:53) a featurette that follows a day in the film's production, hosted/narrated by MacLane. Like myself, MacLane is a big fan of the team of specifically-skilled individuals genre, and in this featurette you get to meet the people on the team that made the movie, with looks at the new tech, the research and lots of discussion of film theory (which explains why Pixar's films are so good.) This is a great supplement to the commentary on the film.

As mentioned in the review, there are commercial breaks in the film, and this release lets you watch them with or without added commercials. You should probably go aheads and turn them on, since the commercials are era-appropriate ads for some of the new toys in the film, including a jingle-happy clip that would have fit neatly next to a "My Buddy" commercial, a military-themed PSA (you know what that means) and a great kaiju spot. These can also be viewed in the extras, where you can check them out with informative intros from MacLane (bringing the package to 1:47 in length.)

Want to hear more from MacLane? You're in luck. He did intros for a set of three deleted scenes, which are presented in animatics form, with temp tracks. These were better left out of the film (especially when you consider MacLane's welcome explanations for their deletion) but these 7:23 of footage is something any Toy Story fanatic will want to see.

Also included is the movie's D23 (Disney fan convention) teaser (1:08), which follows the horror theme pretty tightly, and a code for a digital download of the movie. 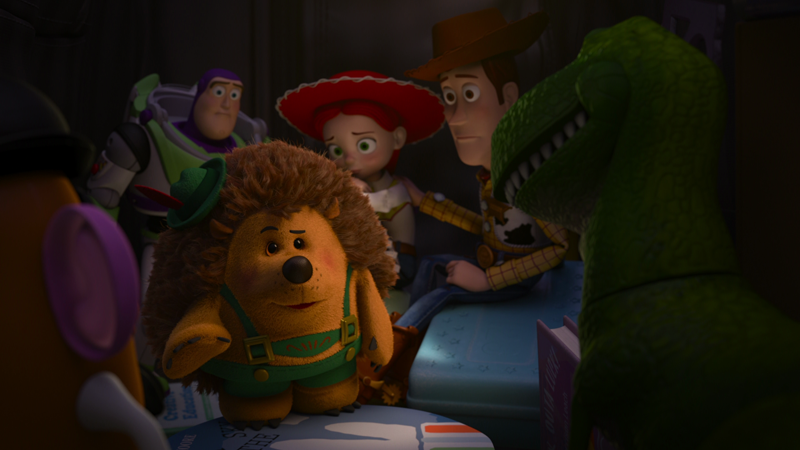 The Bottom Line
The price point for this disc, which is around 13 dollars, makes it easy to recommend this release despite the length of the main feature, simply because the movie is a lot of fun and Disney has added plenty of solid supplementals for Pixar geeks to enjoy. Add in the usual top-notch A/V quality, and it would be hard for anyone who calls themselves a fan of this franchise to not add this disc to their collection.