Sarah Silverman: We are Miracles 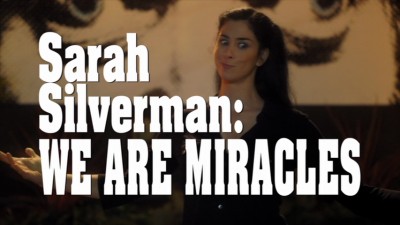 Reviewer's Bias*
Loves: Stand-up comedy, the Largo concept
Likes: Sarah Silverman
Dislikes: Being dirty for no reason
Hates: Having not been to Largo


The Show
The set-up here is the most unique element of Sarah Silverman's latest hour of comedy, as she's performing at Largo, a small club in Los Angeles. It's weird to see someone do an HBO special in front of a small room like that, but Silverman didn't play the main room at Largo. She played the Little Room, essentially a lobby where drinks are served before shows. So she performed an HBO comedy special in front of a scant 39 people. It's hard to say if this arrangement affected her performance in any way, but it does create an interesting atmosphere, as there are no roars of laughter. Instead, you can pick out individual audience members responding to her jokes.

If you've seen Silverman perform before, you have an idea of what to expect from this set. She tells incredibly vulgar, bordering on obscene jokes with a kewpie-doll delivery that somehow amplifies how inappropriate they are, rather than diluting the effect. Though less hacky than Wendy Liebman, Silverman employs a similar misdirection technique in some jokes, starting out a statement innocently, before perverting it. Unlike Liebman, who would use the same rhythm repeatedly, Silverman sells the idea more, making it more effective and certainly funnier. 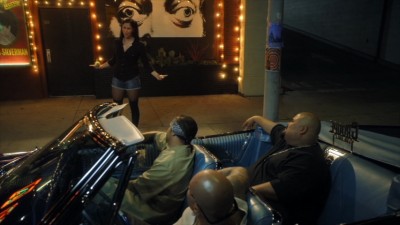 As is her style, Silverman goes to her usual bag of filthy tricks, with plenty of talk about her vagina, and many variations on that topic, along with many rather disgusting sexual gags that touch on a number of, frankly, illegal ideas. Though she manages to draw laughs with these bits, including her strange way of saying a certain anatomical word in order to make it gross, sometimes it seems like she's just being nasty for nasty's sake. It becomes a big numbing when these bits are piled one on top of another, like a section on rape jokes (which has some very pointed moments in it) that follows a joke involving 9/11 widows. Maybe on their own it could work, but this pacing doesn't help.

Known for having an interest in social issues, Silverman's set is peppered with some less scatalogical bits (though that angle is never far away) including talk of religion (focusing on how Scientology is only weird because it's new) and politics (like the battles between Democrats and Republicans.) As she talks about the concept of the separation between church and state (and how fictitious it is), it makes you wish she would try to leave the shock-value jokes on the side once in a while. She doesn't have to become a new Janeane Garofalo, but you don't always have to go to the extremes to get a laugh. 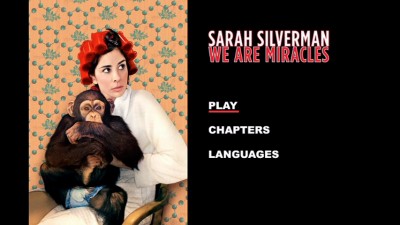 The DVD
We are Miracles is a one-disc release, arriving on a DVD-R, packed in a standard-width keepcase. The disc features a static, anamorphic widescreen menu offering a choice to play the special, select chapters and adjust languages. There are no audio options, but subtitles are available in English and Spanish.

The Quality
The anamorphic widescreen transfer on this disc shows no issues, as the color, including the bright red curtain behind Silverman, is nice and vivid, and the level of fine detail is good for DVD. There are no notable issues with compression artifacts, though how could there be with less than an hour of content on a DVD-R.

The audio is delivered in a Dolby Digital 5.1 track that does a nice job of replicating the room's atmosphere, with SIlverman's distortion-free voice in the center channel, and the audience in the surrounds. There's not a whole lot that could be done with this special, but this release doesn't mess it up either.

The Extras
In case you didn't notice before, there are no extras. 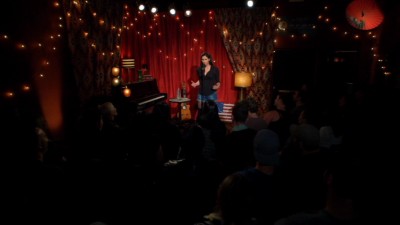 The Bottom Line
Silverman's previous special, Jesus is Magic, which was a unique hybrid movie, was terrific, but this one feels like a bit of a let-down, coming up short in hilarity. The unique setting doesn't really enhance her act, though if you were there it was probably quite different. The DVD looks and sounds fine, but offers no extras to raise the value a bit. Unless you're a hardcore fan of hers, this isn't one you need to own.