Masters of Sex - Season One 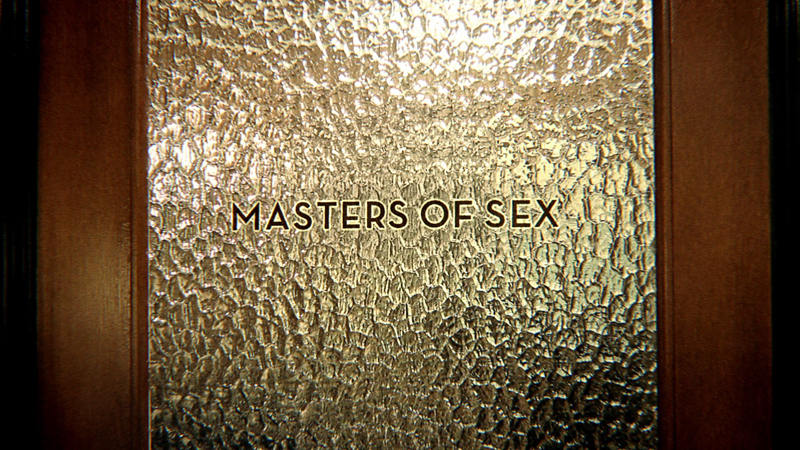 
The Show
Just to get this out of the way, yes, Masters of Sex does indeed include a tremendous amount of the titular intercourse. You could try to tell the story of Dr. William Masters and Virginia Johnson, pioneering researchers in the field of human sexuality, without showing any of the sexy stuff, but why would you? Masters of Sex features copious amounts of female flesh (sorry fans of the male form) and some of the most erotic moments of sexuality seen in popular entertainment in a long time. None of the carnal activity feels particularly salacious, as it's shot with style and taste, and the sex and nudity serve as a contrast to the buttoned-down world of the ‘50s and a peek at the mindsets of people whose lives revolve around sex.

Now, let's get to the story of Masters (Michael Sheen) and Johnson (Lizzy Caplan). Johnson, a single mom and former nightclub singer, works her way into a job as obstetrician Bill Masters' assistant. A sexually liberal woman, Gini is the perfect partner for Bill. She's also better at working with people, namely the subjects of Bill's study, including prostitutes, hospital staff and and intrigued couples. Though Bill and Gini are focused on the sexual response of others, their close work and shared passions create issues for them at home, with Bill's lonely wife Libby (Caitlin Fitzgerald) unable to conceive a child, and Virginia's kids missing their mother.

Sex is the root of trouble for pretty much every character on Masters of Sex, be it hot shot young doctor Ethan Haas (Nicholas D'Agosto), who confuses sex with love (and provides the audience with incredible confict over the course of the season), or lothario Dr. Austin Langham (Teddy Sears), who has trouble with infidelity (or, more to the point, he's really good at it.) Those in Masters and Johnson's world are deeply flawed and struggle with who they truly are and what they want. Being set in the ‘50s is perfect for these stories, as the feeling of repression is a powerful force. It's almost like the most depressing superhero story ever, as everyone has an alter ego, but instead of fighting crime, they are fighting happiness. 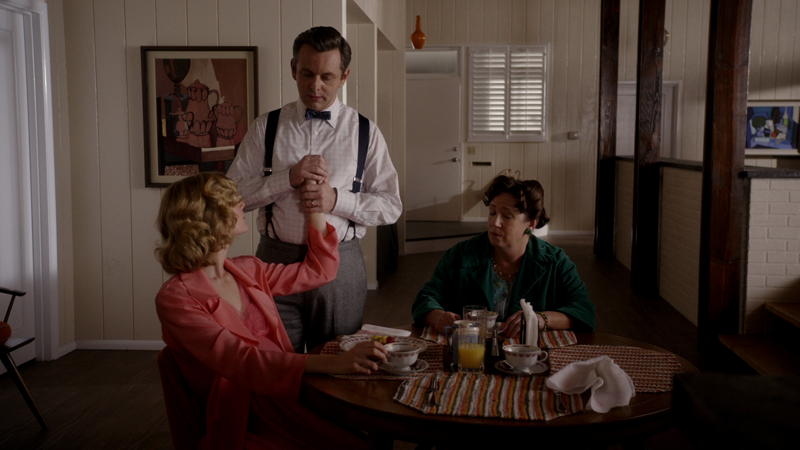 As Masters and Johnson's study progresses (and draws them in) it faces challenges, both internally and externally, as it's not a subject that people understand, and they certainly don't talk about it. It's just one of many social issues the show explores, but it's done in a way that blends the topic in with the story, instead of making it a focus, making it more powerful and integral to the show's feel. The topic of race is ever present, from the Masters' handyman Walter's uneasy position as unequal friend to Libby to the hospital's negro ward and the treatment black women receive, while the ideas of homosexuality and women's rights and equality are frequently a part of the show's subplots, informing characters thoughts, emotions and behavior.

Though Sheen and Caplan (whose look was made for the ‘50s) are obviously the stars of the show, and do tremendous work as a pair of sexual explorers, this really is an ensemble series, with so many memorable performances to enjoy. Caitlin Fitzgerald, as Bill's wife, has possibly the meatiest part in the show, but quietly so, and she breaks your heart at every turn (particularly in the fifth episode, which features possibly the most harrowing, heart-rending moment of TV ever.) Even parts that seem like small guest roles, like Annaleigh Ashford as Betty the prostitute (and Bill's first test subject), Helene York playing Jane the secretary (and perhaps Bill's most loyal test subject) and (the impossibly-named) Finn Wittrock, who plays a hustler with a heart of gold, start out as somewhat one-dimensional, but they soon blossom into full-fledged characters who draw you into their stories. The supporting cast, which includes greats like Beau Bridges and Allison Janney (playing a couple struggling with sex for very different reasons) just hits it out of the park.

Masters of Sex is an utter work of art, which makes plenty of sense when you consider the talent at work behind the camera, which includes such directorial luminaries as John Madden (Shakespeare in Love) and Michael Apted (The World is not Enough) along with a host of TV veterans who are alumni of top-level series, including Big Love, The West Wing and, unsurprisingly, several who directed episodes of Mad Men. When you've got a series set in the mid-20th century, with guys in formal wear, drinking and smoking and often being misogynistic, the comparisons are hard to ignore, but this is no clone. Masters of Sex is its own beast, and this beast is beautiful. 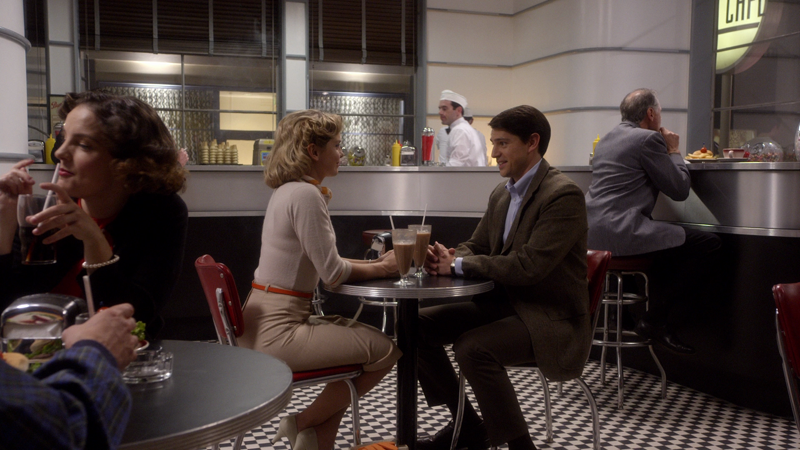 The Discs
This set, which collects the 12 first-season episodes, arrives on four Blu-ray discs, packed in a slightly thick dual-hubbed Blu-ray keepcase with a dual-hubbed tray and a two-sided cover featuring disc contents and episode descriptions (inside a slipcover that repeats the cover art, which unfortunately does not use the extremely clever logo used to promote the show) The static menus include options to watch all the episodes, select shows, adjust the settings and check out the extras. Audio options include English and French 5.1 DTS-HD Master Audio tracks, while subtitles are available in English, English SDH and French.

The Quality
The 1080p, AVC-encoded widescreen image is just gorgeous, filled with the lush colors of the ‘50s, including deep blues and crimson reds, and the skintones (of which there are plenty) are spot-on, while the back levels are nice and deep, keeping the darker night scenes well-defined. The level of fine detail is excellent, which is something to be thankfully for considering the amount of detail in the set and costume design. Pretty much every scene is loaded with little touches to catch your eye, and it's all got that pretty cinematic look, with an appropriate layer of grain on the preceedings. With twelve episodes spread over four discs, this is a comfortable presentation, and there are no problems with digital distractions.

Masters of Sex isn't a bombastic series when it comes to sound, often delivering simple, clear dialogue right down the middle from the center channel in these 5.1 DTS-HD Master Audio tracks, with an engaging amount of atmospheric effects (where appropriate), but when the sound lends itself to a deeper presentation, like the air-raid sirens in "Fallout" or the many great uses of old-time music, the surround come alive to set the scene. You're not going to find much action in the surrounds, but they do their job well in supporting the sound design.

The Extras
The extras start with a commentary on the pilot episode with Sheen, Caplan, Fitzgerald, Sears, series creator Michelle Ashford and executive producer Sarah Timberman. A very friendly track, led by Caplan and Sheen's fun personalities, it's a mix of production detail and set stories from Long Island, with added bits of conversation about a variety of topics, including dirty words, pubic hair and the absence of male nudity, and the similarities between Margo Martindale and Samuel L. Jackson. The commentary is so engaging and enjoyable, mixing silliness and genuine discussion, you wish there was more than just one. Just beware of the sex noises.

An assortment of deleted scenes are included, with 13 scenes, totaling 13:02 worth of content. Most moments are very minor, lines that don't add much to the show and were likely trimmed for time. A few flesh out characters a bit, like a conversation between Libby and Virginia about mates, while others include story points that were excised, like a senator client of Masters' or Masters' vicious verbal assault on a medical fellow.

Several featurettes are included, but these should be avoid until after completing the series, as there's a great many spoilers revealed. "Making of Masters of Sex" is a solid overview of the show's first season, with interviews with Ashford, Timberman, a large number of cast members (including Sheen, Caplan, Fitzgerald, Bridges, Janney, Sears, D'Agosto and York) as well as directors Apted and Michael Dinner. The discussion covers the characters, the nudity and sex in the series and the storylines in the show. Hearing from so many of those involved lends this solid insight into the series.

A matched pair of featuettes on the lead characters is next, starting with "A Masterful Portrayal: Michael Sheen as Dr. Masters" (6:48), which looks at Sheen's character, including his family, the challenging elements of the part and how he approaches the role as an actor. Several members of the cast and crew share their perspective as well, including Caplan and Apted. Then, "Ahead of Her Time: Lizzy Caplan as Virgina Johnson" (5:13) gives Caplan's role its due, as she talks about the experience and others discuss how Caplan's personality suits the role.

The focus turns to the real-life Masters and Johnson in "The Real Masters: A Conversation with Thomas Maier" (7:13), which lets the author of the series' source book share info on them, especially in regards to the relationship between the two researchers. More about their work is included in "Surprising Facts About Sex: The Masters' Great Discoveries" (4:07), a review of Masters and Johnson's findings, narrated by Sears. Its value is somewhat questionable though, as anyone who's watched the episodes knows the things it says, while those who haven't, wouldn't want the spoilers it contains.

Each episode, except for the first, is available to watch with a recap of the previous episode, which are more valuable when the show ran over a length of time on television than here on disc. There are also previews (for the second season of Masters of Sex (though with no new content), House of Cards and That Awkward Moment, About Last Night, along with an Ultraviolet stream code. 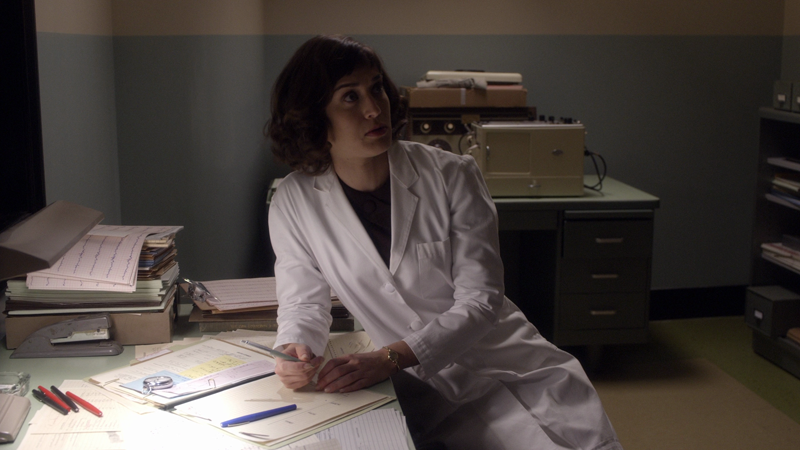 The Bottom Line
With so many longtime drama favorites ending recently, Masters of Sex is one of the best contenders to fill the void, with beautiful visuals, fantastic acting and some intense drama (as well as other, more prurient interests.) This first season throws everything into the pot, from sexuality to psychological damage to social issues, and puts the characters through the wringer, and it doesn't seem like these broken folks are in for a happy ending. But you'll stick with them every step of the way. The presentation here is top-notch, with a nice collection of extras, which put the focus on the leads and the history. If you can deal with a good amount of sex and nudity, you're not going to find many shows offering better drama with better acting.