We Always Lie to Strangers: The Incredible True Story of Branson, Missouri 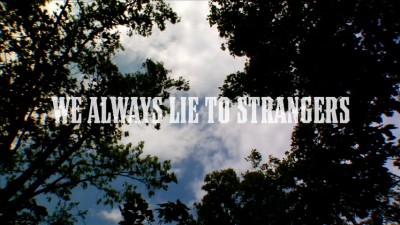 
The Movie
If Ned Flanders had an opportunity to create his own Las Vegas, it would probably end up looking like Branson, Missouri, a top vacation driving destination for much of America's more conservative element. Built around a highway in the Ozarks, the town has a large number of live entertainment venues, where acts that offer a clean, family-friendly performance, including many revues and tributes to the big stars of the past, play to welcoming crowds. While it may not be the choice of those on the coasts, it's enough of a midwest favorite to draw millions each year. As long as there are people who live for the past and fear the different, there will be customers for Branson (which, based on articles about Branson's economy, are decreasing in number.)

We Always Lie to Strangers, which takes its name from an apocryphal story about the legends of the Ozarks told by one of the film's subjects, looks at the town of Branson by profiling its people, namely the people who put on the shows that give Branson its identity and existence. After establishing a bit about the place's history and some of its signature local acts, including the non-Elvis-related "Presleys' Country Jubilee", "The Magnificent Variety Show" and the Lennon family, the film delves a bit deeper into the people behind the scenes and the town they live in, and the connection between them, personified by the mayor, Raeanne Presley, who runs the town and is a member of one of the long-time fixtures, the family behind the previously mentioned Country Jubilee. Through Raeanne, the film shows Branson's strengths and struggles, especially the troubles experienced by service workers who don't make enough to avoid homelessness, but who are essential to continuing operations. 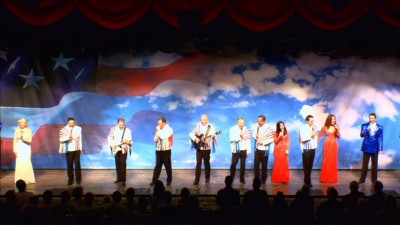 The focus however is on the sparkle and shine of the shows, which hide some of the pain on the part of the performers and owners, who fight personal strife and financial misfortune, as the performing life is far from easy and the economy hits Branson's customer base hard over the course of the film. While there are big acts in Branson, including the apparently successful Yakov Smirnoff and any number of well-known tribute acts and stop-bys, this movie is about the people of Branson, who, when they aren't singing and dancing, are working other jobs in town. You've got single moms juggling schedule, gay men in a Bible-beating society, Democrats deep in Dixie and theater owners who clean bathrooms because they can't afford to hire help. Though they love performing and value the town's history, it's hard to find anyone who seems really happy when they aren't on stage.

The documentary, directed by A.J. Schnack (They Might be Giants documentary Gigantic and Kurt Cobain: About a Boy) and David Wilson (P.O.V.) has a very easy, fly-on-the-wall feel to it, and the camera captures a lot of the emotion of people trying to do their best in a situation so artificial that it would feel made-up if you didn't know it actually exists. Though it could possibly do with a more judicious edit (checking in at almost two hours, despite a lack of any real through story) it creates a feeling for what this town really is, contrasting the God Bless America vibe with the darker current that runs beneath the surface, including a foul-mouthed performer who is tired of the drama at her theater and a vicious, homophobic text-message attack directed at one of the performers by his ex-wife's new husband. Using a member of one of Branson's long-standing starring families, who happens to be a die-hard liberal, as a more vocal example of the divide in the reality and public face of Branson, We Always Lie to Strangers metamorphosizes from the story of a unique little show-town into a stand-in for America's cultural civil war. 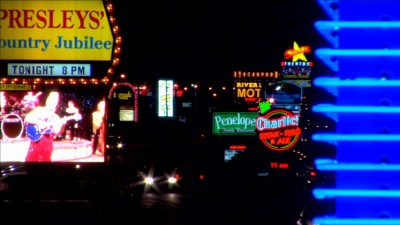 The DVD
We Always Lie to Strangers is a one-disc release, packed in a standard-width keepcase. The disc has no menu and no audio options, but closed captioning is available in English.

The Quality
The anamorphic widescreen transfer on this disc is solid, showing off the the more colorful aspects of Branson, especially the stage shows, with appropriate color and nice black levels, while the level of fine detail is rather high, though some of the performance clips can come off a bit soft (due to lighting it seems.) There are no concerns about compression artifacts or any other bugaboos. This is a very pretty documentary to watch.

The audio is delivered in a Dolby Digital 5.1 track that does the trick. The dialogue is clean and easily understood in the center channel, while the music in the soundtrack gets a boost from the surrounds (oddly, the live performances tend to stay in the front of the room). The music in this film (that's not from the shows) is incredibly haunting and well-used, creating a schizophrenic mood of something's-not-right and down-home-Americana. The rear channels tend to handle some light atmospheric effects (and some occasional echoes (along with one appreciated sound effect.)) A solid presentation for a documentary.

The Extras
As the old saying goes, no menu, no extras. 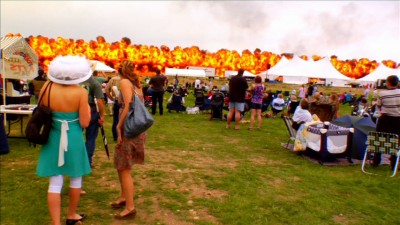 The Bottom Line
We Always Lie to Strangers is a great look at an All-American town struggling with what it truly is; putting on a smiling face while crying on the inside. However, by not being razor-focused on that idea, it weaves the stories of many people together to create a multi-faceted view of Branson and a touching tribute to these people. The DVD offers nothing beyond the movie, but delivers it in fine quality, making it one you should definitely check out.