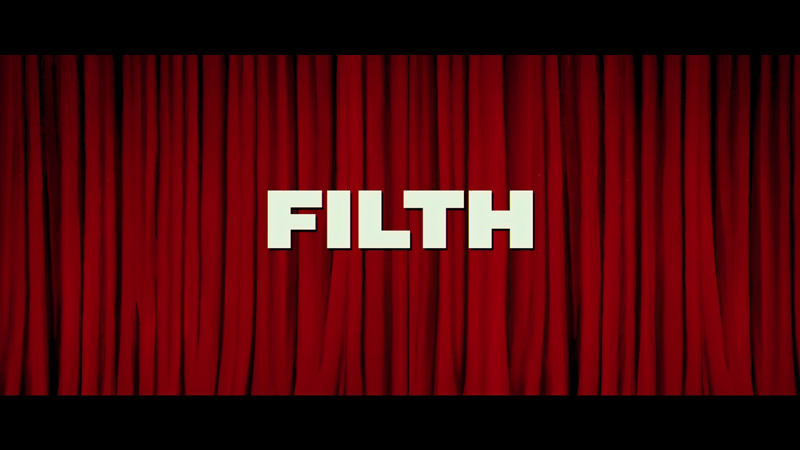 
The Movie
You know you've got an interesting hero on your hands when less than four minutes into the film he's already flipped off a child with double middle fingers. Such is the case with Detective Bruce Robertson (James McAvoy), star of Jon Baird's adaptation of Trainspotting author Irvine Welsh's 1998 novel Filth. A dark and twisted man, Robertson abuses drugs and all those around him, in order to get what he wants, though it soon becomes obvious that what he really wants will always be out of reach.

After we meet Carole (Shauna Macdonald) and her husband Bruce, the film gets started in earnest with the beating death of a Japanese student by a gang of Scottish street thugs. The case gives a throughline to the film, but it doesn't often rise to the surface, because the real story is about the chase for a promotion to Detective Inspector. Bruce won't allow anyone else to get that job, and thus he enters into psychological warfare with his colleagues on the police force. A truly evil man, no low is to low for him, be it sleeping with a co-worker's wife or sexually harassing another. The thing is, McAvoy is so incredibly charming that it's easy to root for the bad guy. 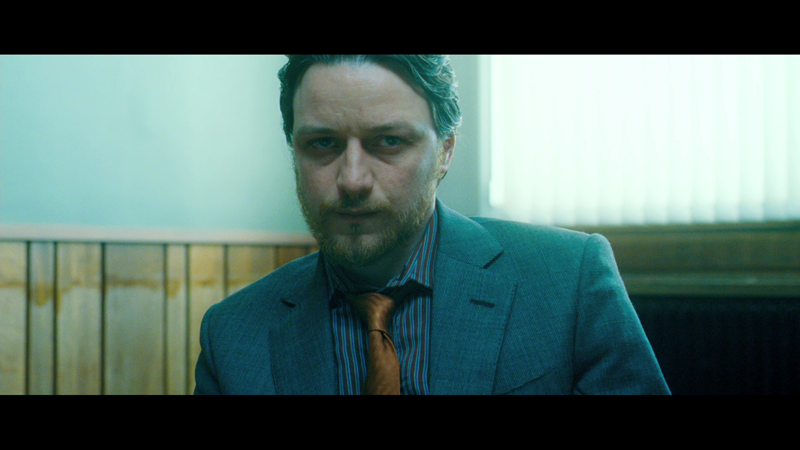 Unfortunately for Bruce though, he's got some issues going on inside, and the stress from work is causing him problems, including severe hallucinations. That's where things start getting really interesting, with a crack-pot doctor showing up for terrible therapy sessions, while other people begin to take on the heads of animals. It's not just acid-trip weirdness though, as the hallucinations help reveal the mystery of what's going on with Bruce, and it is a doozy. As clues are discovered, you are able to start putting two and two together, but you may be going in the wrong direction, and suddenly--BOOM. And you're in deep on a roller-coaster ride to the end.

Though there are great performances throughout, including Jamie Bell playing Bruce's sidekick and Shirley Henderson as the sexually-frustrated wife of Bruce's nebbish pal, not to mention Imogen Poots' part as one of the few cops able to stand up to Bruce, but this movie is all about McAvoy. He's shown time and again he's got the chops to play a smart. funny leading man, but Bruce lets him really shine when it comes to coiled-spring drama. As things go from bad to worse, McAvoy coveys the struggle, especially the fight to try and not let his problems show though to others. Anger, pain, hurt...he delivers them all and makes you care about a psychopath.

Welsh's work lends itself to inventive filmmaking, and though it's a very different film, Filth follows in the footsteps of Welsh's hit Trainspotting. Baird has crafted a world that is grim and gritty, yet visually intriguing, full of special touches that draw you in and freak you out, to help get you into Bruce's head. The way the mystery plays out, both visually and plot-wise, are extremely well-handled, and the major derivations Baird made in writing the screenplay paid off well. Putting a neat little bow on top is the music, both in terms of the soundtrack and the score by Clint Mansell (Moon, Requiem for a Dream). All of the songs work toward building mood and tension, pulling the viewer along toward an end point they may not want to visit.

Though Filth is brilliant and brilliantly entertaining, so much fo the effect rides on going in not knowing what to expect. That's the great thing about the wonderful trailer that was released, as it ruined nothing, because it didn't show what the film really is. After watching it a few times, it's still very entertaining, and it allows you to go over the story with added knowledge, to see what you missed, but the impact, especially from the final moments (and the strangeness that follows) just isn't, and can't be the same. But the first time you watch it, it's an experience. 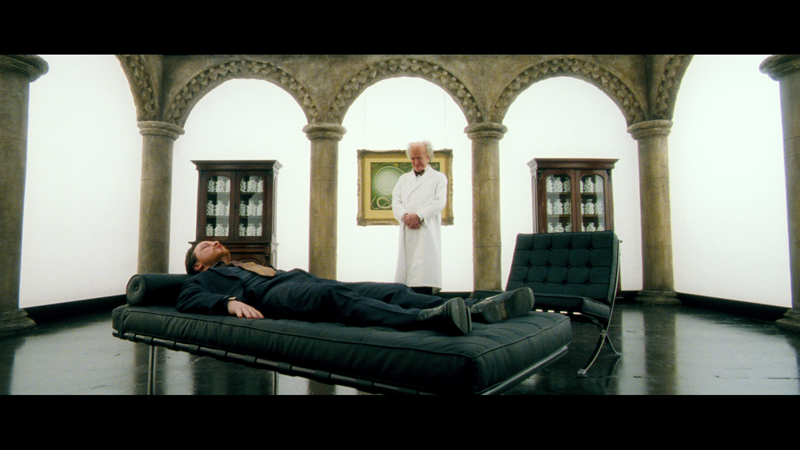 The Disc
Filth arrives on a Blu-ray disc in a standard BD keepcase. The disc features an animated menu offering the option to watch the film, select chapters, adjust languages and check out the extras, along with bookmarks and BD-Live access. There are no audio options, but subtitles are available in English SDH, Spanish and French.

The Quality
Delivered with a 1080p, AVC-encoded transfer, Filth features a number of looks over the course of the film, from dark, cold-colored scenes to bright-white clean-room moments, and everything in-between. Color is appropriate across the board, whether it's intended to be dull or overexposed, or bright and vibrant, while black levels are solid and the level of fine detail is quite high (at least where it's allowed, as blurring is part of the visual toolbox here. There are no concerns about digital distractions though

The 5.1 DTS-HD Master Audio track gives Mansell's score and the pitch-perfect songs on the soundtrack the proper presentation required to truly lend their power to the film, while the dynamic mix, with plenty of atmospheric effects in the surrounds and nice movement across the soundfield, helps accentuate the often disjointed and chaotic feel of what's happening on-screen. Though the dialogue is strong and clear, the subtitles still come in handy thanks to the dominant accent on display.

The Extras
A quality selection of bonus content kicks off with 23:21 of deleted, extended and alternate scenes (11 in all.) One moment that was cut (of which two takes are included) would have changed a great deal about the film, while another is actually filthier (at least in concept) than anything that made it into the movie. There's also an extended role for a very minor character. Beyond that, there's also 7:35 of outtakes which are amusing for the crack-ups and flubs, particularly if McAvoy is involved.

A commentary by Baird and Welsh is a friendly chat that's loaded with info on a number of topics, be it the differences from the book, details on the production, why some scenes were cut, how the film was cast or their thoughts on drugs and mental illness. Fortunately, they get their praise for the actors out of the way early on, leaving them plenty of time for an insightful discussion about the film. They also provide some thoughts on commentaries as an idea, inspired by their experience on this track. A subtitle track for their Scottish accents would have been nice, but it's not too hard to follow.

A pair of featurettes follow. "James McAvoy as Detective Bruce Robertson: The Antihero" (11:58), which features interviews with most of the main cast and crew, focusing on the character and how McAvoy brought him to life, including talk about how Welsh doubted that he could play the role and McAvoy comparing the part to Shakespeare's creations. "On the Set: Merry Filthmas" (4:15) uses behind-the-scenes footage and interviews with cast and crew to look at the big party scene. It overlaps a bit with some of the other information shared on this disc, but it does let us see the filming process.

Also included on this disc are six trailers (none for the film) and the 2:57 "AXS TV: A Look at Filth", a promo from Magnet's sister company that blends an interview with McAvoy into the film's trailer. 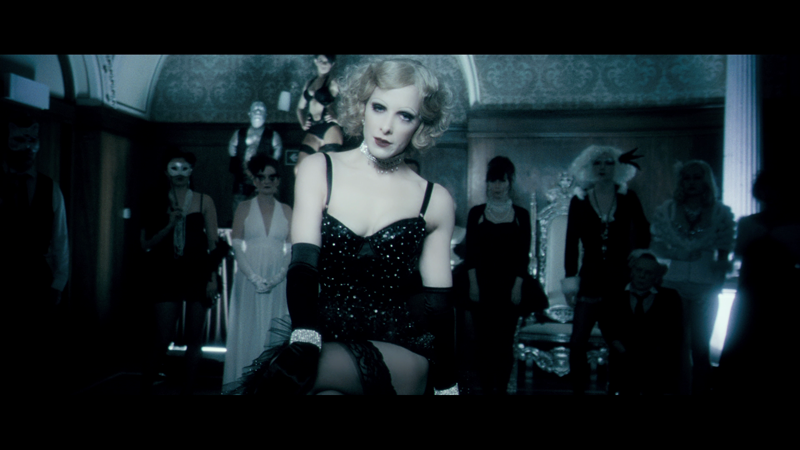 The Bottom Line
Though exceedingly dark, Filth is less harrowing than Welsh's Trainspotting, but no less engaging or entertaining, thanks to great performances, led by McAvoy, an excellent adaptation of Welsh's book and beautiful visuals, directed by co-writer Baird. The disc looks and sounds great, and features plenty of informative extras, making for a great pick-up. At times surreal and always fascinating, the film does struggle a bit with repeated viewings, as so much rides on being surprised, but with McAvoy on hand, it's worth another look anyway.