The late Amir Shervan broke into the Hollywood scene in 1987 at the age of 58; having had some success in his native Iran, Shervan set his sights on one of the hottest genres of the time: the action film. Beginning with "Hollywood Cop" and ending five years later with "Young Rebels," Shervan's legacy has quietly gone unnoticed by most for nearly two decades. In the cult movie circle though, love for his films, at least "Samurai Cop," arguably his magnum opus has never waned and last year's re-mastered DVD release from Cinema Epoch allotted viewers to behold pure cinema schlock with as crystal clear picture and sound as one could hope from shoestring productions. Now continuing to build awareness of Shervan's action fumbles turned comedy masterpieces, Cinema Epoch offers up the most audaciously titled of Shervan's films in a similar re-mastered edition. Enter "Killing American Style," a film that makes no pretenses proudly sporting the tagline, "There Are All Kinds of Killings, The Best is American Style." 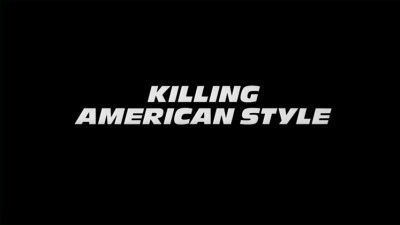 The sheer incomprehensibility of its tagline easily sums up the 89-minutes of cinematic disaster that comprise "Killing American Style." Genre fans will note right up front a big draw of this forgotten "classic," is yet another prominent role for genre mainstay, Robert Z'Dar, once again playing a film's major villain and turning in the most coherent performance (sorry Jim Brown, but its painfully obvious you had no idea what you got mixed up in here), while managing to slyly let the audience know he was happy collecting a paycheck. Z'Dar is Tony Stone, the leader of one of the sleaziest and most inept gangs in Southern California; when he's not engaging in unnecessary and cringe inducing love scenes, Tony Stone is killing cops and then pondering why they are giving him a hassle. Stone's gang somehow evades arrest and finds itself taking the family of hero John Morgan (Harold Diamond) hostage and forcing Morgan to act as their go between. There's a strange plot of money being held somewhere that frankly I never fully understood; the bottom line is this sets up the opportunity for Stone and his gang to terrorize a family and Morgan to ultimately take revenge in the titular style expected. 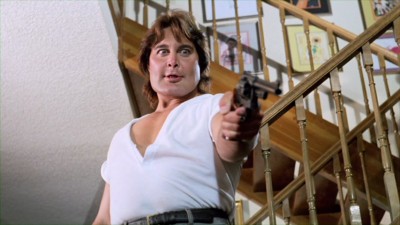 Those familiar with Shervan's previous works will not exactly what to expect from the film. My semi-incomprehensible plot summary doesn't do the script (I'd make a safe wager, there never actually existed a full, complete screenplay) justice. Characters speak a form of conversational English that has never existed anywhere outside an Amir Shervan film. Lines are delivered with little care for their intent and the word confused is the best descript for most performances. It would all be a load of fun, if it weren't for a fairly heinous rape scene Shervan throws in involving Stone's right-hand man Lynch (John Lynch). If the subject matter weren't so serious, the set-up to the actual scene would be the most unintentionally funny sequence in the entire film, so at the end of the day, Shervan does actually get the one emotion in that scene he was going for: disgust and discomfort. 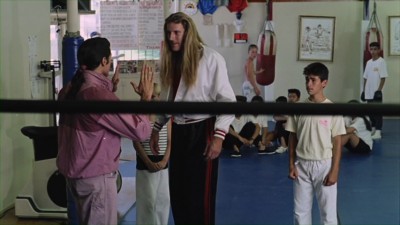 By the time the blistering synth soundtrack kicks into gear over the closing credits, most of "Killing American Style" is going to be long forgotten. It's as technically inept as any other Shervan production, but it lacks two things that made "Samurai Cop" so unforgettable: a truly clueless leading man and a plot that was somewhat sensical, just terribly executed. Harold Diamond is no master thespian, but he's light years beyond Matt Hannon; in this outing, he seems legitimately bored by the whole film and he's a hero hard to root for. Still there are enough ‘huh' moments within to cements its status as a very minor cult classic; anything involving Jim Brown's detective character is solid gold; from awkwardly rotoscoped in backgrounds in one scene to a colleague awkwardly putting his foot up on a way too high desk to look cool, the police force set to stop Stone's gang's ineptitude is the only logical reason why Stone is able to bumble his way through the film. A film solely about the police in this film…now that's a movie I could get behind.


The 1.78:1 anamorphic widescreen transfer is far more vibrant than a haggard old VHS tape, but that's not saying much to begin with. Colors are slightly washed out, with the worst being sections feeling draped in a reddish hue due to poor original film stock or just poor storage of the elements. There's some minor to moderate print damage, with detail sticking firmly in the midst of the average to below average category.


The Dolby Digital English stereo audio track is generally consistent, but wholly unimpressive compared to anything other than fellow Z-grade schlock. The mix struggles to stay balanced and there's a decent smattering of high-end distortion. Occasionally a few lines get lost, but in the grand scheme of things, I'm not sure it would affect the story one iota.


The lone extra is an interview with actor G. Alexandor Virdon.

Not nearly the level of cult classic as "Samurai Cop," "Killing American Style" more often than not just a plain bad movie instead of being bad in that rare unintentionally funny way. Robert Z'Dar and Jim Brown's band of modern day Keystone Cops are the main highlights with everything else melding into a VHS haze of incomprehensibility. Rent It.