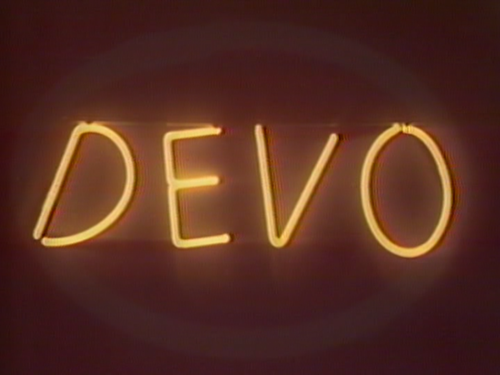 As I mentioned in my review of The Cars' video album for Heartbeat City, I worked at a video store in my high school days and first encountered the VHS of Devo's The Men Who Make The Music while snooping around in the storage area of my store. Not a Devo fan at the time, I was fond of watching the "Whip It" video when it came on VH1 and so I was intrigued by the tape. I pulled it out of the back and put it on the rental shelf -- solely so I could rent it.

At the time, I appreciated the video's weirdness, but I was a little put off because I didn't know any of the songs. The Men Who Make The Music was made in 1979 -- before the band recorded their third album, Freedom of Choice, which featured "Whip It." (Time Life, who partnered with Warner Brothers on the VHS release, sat on the video until 1981, so I bet there were many Devo neophytes who were similarly puzzled by the lack of "Whip It" when the tape originally hit store shelves.)

Now, I am a Devo fan. I love the angular guitar sound, the stoically satirical lyrics, the arty merging of rock and dance pop, the weird outfits, the slang, the funny dances -- I love the whole potato, as it were. Watching The Men Who Make The Music in 2014 with full knowledge of all the songs is quite enjoyable, but largely for time-capsule/nostalgic reasons. The program stitches together filmed music videos and video-shot live performance clips with interstitial mock-propaganda films featuring Robert Mothersbaugh, Sr. (father of band members Mark and Bob 1) as General Boy, touting the de-evolutionary work of the band. The centerpiece is an anti-music-business short film featuring slimy record company exec Rod Rooter (Michael Schwartz), who tells the boys to stick with their yellow jumpsuit look from the first album. This smorgasbord of concepts doesn't really cohere and just remains a bunch of music clips and stiffly acted short films. But let it be said: each piece is pretty fun to look at.

The videos and the live footage are great. The videos have a funky, lo-fi quality that gives them the feeling of an art school project, without the slickness of big corporate product. Similarly, the live footage is not amazingly well shot, but it captures the band at a great time when they were young, energetic, and bursting with ideas. All of the music videos are also collected in The Complete Truth About De-Evolution, which MVD also just re-released on DVD. That release provides a fuller picture of what Devo could do, but The Men Who Make The Music is an interesting snapshot of their first commerical releases. 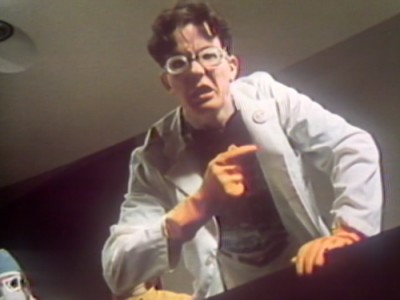 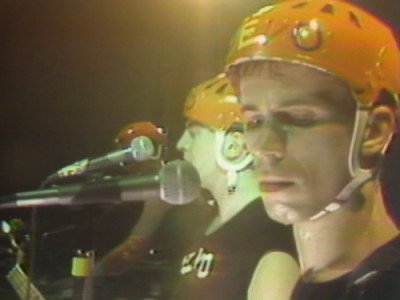 Also included on the DVD is the long-promised special Butch Devo and the Sundance Gig, which is an hour-long reunion concert, recorded at the 1996 Sundance Film Festival. In many ways, this is a bigger treat than the first program because of how surprisingly good the band sounds. I've seen the Live in the Land of the Rising Sun DVD from the band's re-reunion in 2003, and while it was fun, it has a shut-up-and-play-the-hits feeling to it. This gig, played in front of a mixture of diehards and randos, seems designed to please the band first and foremost. What other explanation can there be for the pseudo-Unplugged midsection, where the band sits on stools and performs a roots-rock ballad version of their mission statement "Jocko Homo" ("Are we not men? We are Devo!"), complete with an intentionally crappy faux-reggae bridge?

While that re-arrangement is the most self-consciously devolved moment in the show, the band offers consistently lively renditions of tunes from their first four albums (plus "That's Good" from album 5), dressed like escaped convicts. (Toward the end of the show, these outfits are augmented by headgear in the form of energy domes and plastic New Traditionalist pomps.) The 7-minute epic "Smart Patrol / Mr. DNA" is particularly great, with Bob 1 getting pulled into the crowd for some seemingly unintended surfing during one of his guitar solos.

As if the crowd's predilection for jumping off the stage and crowd-surfing wasn't enough of an indication that this is a mid-'90s show, the director throws in some black-and-white shots and some blurry shutter effects to remind you of what was videographically fashionable at the time. I haven't seen all of the band's 1996 Lollapalooza performance, which was released as Devo Live, but I watched a few songs from that show on Youtube and I can happily report that at least this Sundance performance does not have the same seizure-inducing frenetic editing of that Lollapalooza presentation.

The concert video does have one major technical drawback. A variety of moments seem to have suffered from some bad linear insert editing, which results in stray black frames and long sections where the video and audio are out of sync. It is a testament to the quality of the band's performance that I eventually wound up forgetting about these frequent flubs and just enjoyed the concert. 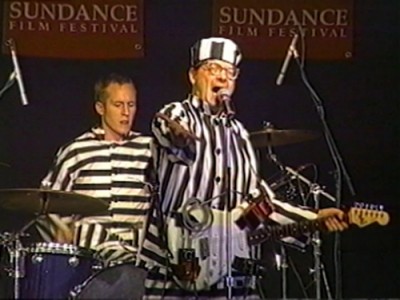 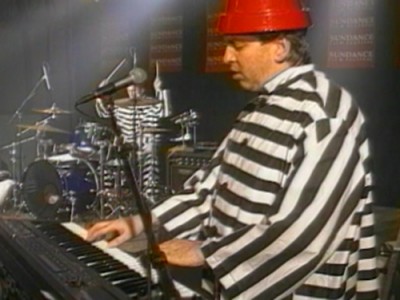 The Video:
Two different eras of videotape, both problematic in different ways. Like an uncanny glimpse into our recent but strangely distant past, the 1.33:1 standard presentations for both programs are utterly analog and chock full of smearing, aliasing, noise, ghosting, and the like. Even the filmed portions of the first program are subject to the same issues. You have to lay the majority of these issues at the feet of the original videotape masters, so I don't think it's reasonable to expect a better-looking presentation. As a time capsule, the video serves it purpose.

The Audio:
Both programs have Dolby 2.0 stereo audio, although Butch Devo has an increased bitrate of 320 kbps. The Men Who Make The Music sounds decent, if a little light on the low end. It also has noticeable tape hiss, if you listen with headphones (I didn't notice the hiss so much in my normal living room set-up). Butch Devo has a much fuller, higher-fidelity sound with more gut-rumbling low end. It's not a pristine recording, but it's certainly on-par with a lot of live recordings on the market. Apparently MVD put out a picture-disc vinyl with 11 of Butch Devo's 14 tracks as part of a Record Store Day special, so possibly someone made an effort to remaster the sound (although there's no credit for that on the program or disc). Either way, it's a pleasing sound mix.

(36:43) - This is the sound check and some rehearsal for the Sundance gig, shot from off stage with a consumer video camera. The sound is very quiet, so you have to boost it. Even if you make the effort to do so, this isn't a particularly revelatory piece. Hardcore fans might get a kick out of watching the band knocking the dust off and getting back to business.

Final Thoughts:
This is a fans-only release, really. Newcomers should really start with The Complete Truth About De-Evolution to get a sense of the band's video output, listen to a few albums, and marinate. Once you've done that, you can come back here and enjoy the live antics of Devo in 1979 and 1996. (It's interesting to see the band perform similar shtick during both eras. Mark Mothersbaugh asks audience members what they are doing with their hands in both performances of "Praying Hands" and both times, the audience has no good answers for him.) If you've already done the preparatory work, then this disc comes Recommended. 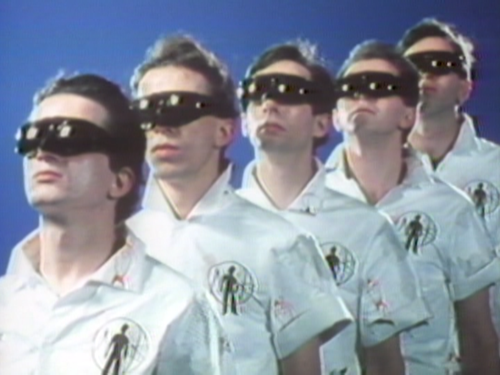