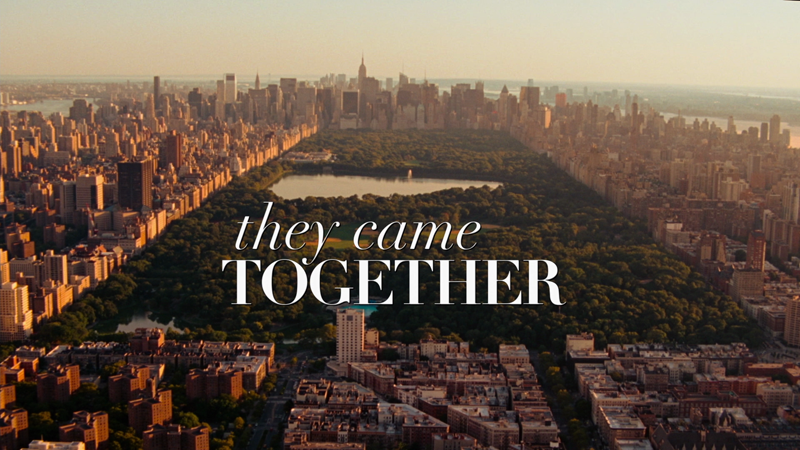 
The Movie
It's kind of baffling to think that broad spoofs like the films of the Zucker Brothers and Mel Brooks ever went out of style. Sight gags, over-the-top puns, meta comedy…films like Top Secret! are just cinematic bursts of joy; a silly confection that you can return to again and again. However, as the Zuckers and Brooks struggled through late-career bombs, a more insidious version of the spoof came on the scene, heralded by Scary Movie. The reference-as-comedy spoof has darkened the doorways of our theaters for far too long, perpetuated by the Wayans brothers and Jason Friedberg and Aaron Seltzer. We needed a return to the earnestly goofy genre spoofs that David Wain and Michael Showalter (both alumni of the classic ‘90s sketch troupe The State) have delivered in They Came Together.

Right from the beginning, as we listen in on a couples dinner with Joel and Molly (Paul Rudd and Amy Poehler) and Kyle and Karen (Bill Hader and Ellie Kemper), it's clear, we are not dealing with reality here. Joel and Molly tell the story of their romantic history in a hugely self-aware method, employing all the classic romantic movie tropes, while vigorously insisting (with a wink to the audience) that their lives are not a movie. But with everyone on board, we get to see how Joel and Molly met and fell in love. It's a story we've seen many times before, in countless romantic comedies. It's just that their version ramps up the conventions to a staggering degree, pulling a bit from all the classics and poking fun at them at the same time.

With Poehler and Rudd at the center, you've instantly established that this could be a real romantic comedy. They are tailor-made for such a film, and are incredibly cute together, and thus establish a parallel to the reality of the genre as the audience knows it. With that connection secure, it comes time to pervert it, which Wain (who also directs) and Showalter do with pleasure. All the standards are in place, like the guy's ne'erdowell brother, the girl's minority confidant and the romantic rival who's just not right for her, but all these elements are all just a little off and highly exaggerated. Take for instance Joel's basketball game with his friends. Each has a very specific personality, be it the horndog, the sensitive guy or the married guy, and their dialogue is stilted and focused like a laser beam on their personal perspective on whatever matter is at hand, thus helping the hero make up his own mind. The fact that none of them can sink a shot (unlike the usual gang of movie guys, who shoot like NBA all-stars) is the cherry on top of a ridiculous sundae. 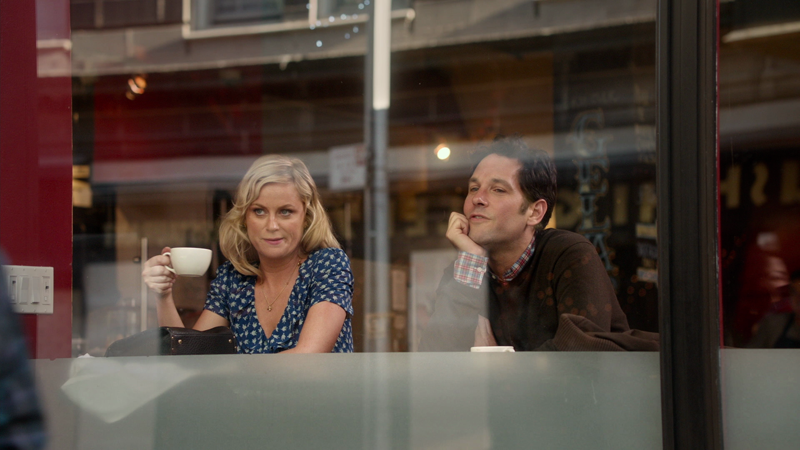 After missing the silliness of the ZAZ films, like Airplane!, it was refreshing to see a movie go for the joke and really commit to it. Wordplay that becomes real, like a stuck-up guy who literally is stuck-up, is an irresistible comedy nugget, as is the classic character who takes things literally, like a bartender who doesn't understand sayings, setting off a historic loop of dialogue that will test some viewers' patience. Occasionally there's a bit of gross-out humor, but nothing to the extreme of the recent era of spoofs, and never as intended to be the joke in and of itself. It doesn't make one scene with Rudd and his grandmother any less disturbing though.

Starting out with Rudd and Poehler as your stars, and then pairing them with the hysterical Hader and Kemper automatically gives the film a leg up, but Wain and company managed to gather together a truly incredible and deep comedy cast. When you've got Erinn Hayes (Childrens Hospital) essentially as an extra and Adam Scott and John Stamos popping in for lineless cameos, you know the roster is impressive, and that's the case here. Jason Mantzoukas is excellent playing a friend of Joel's (utilizing his ability to play it real to the hilt), Michael Ian Black is perfectly sleazy as Joel's work foe, Max Greenfield shines as usual as Joel's brother and Cobie Smulders is great as Joel's awful ex. Meanwhile, Ed Helms gets to play another variation on his awkward guy, Christopher Meloni tops his Wet Hot American Summer turn as a lunatic boss and Ken Marino, Jack McBrayer and Keenan Thompson all get their own moments as Joel's pals. And that's not even mentioning Michaela Watkins and Jeffrey Dean Morgan.

The cast is amazing, but is it a laugh riot? No, not particularly, but it's never boring and there are some incredibly hilarious moments (one sight gag involving Mantzoukas and a subtitle caused a legitimate spit take.) The thing the movie really has going for it (besides a well-formed understanding of the look and feel of a rom-com) is the cast, which earns it a tremendous amount of goodwill. It's hard to say, but it's likely They Came Together wouldn't have been nearly as entertaining with a cast of no-names, and that points to some weakness on the part of the script, which leans more toward the clever than the uproarious. That said, there's no denying the talent involved, and the scenes with Rudd, Poehler, Hader and Kemper were fantastically funny and couldn't have been duplicated by anyone else. 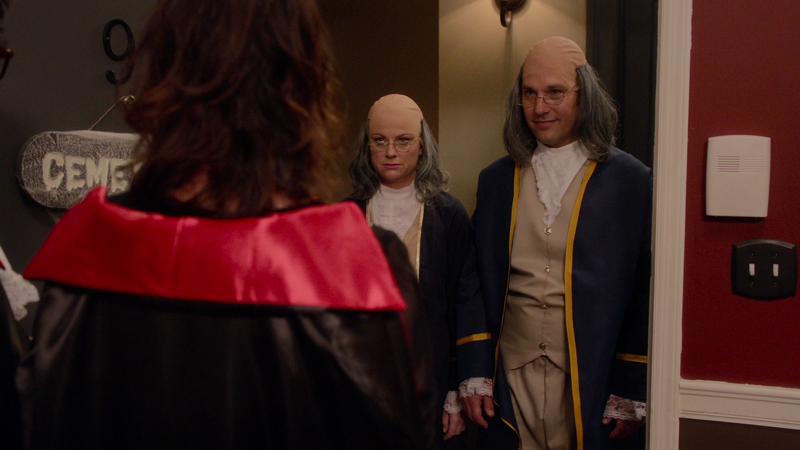 The Disc
They Came Together arrives on one Blu-ray, in a standard Blu-ray keepcase that's wrapped in a pointless slipcover that repeats the cover art. The deceptive mindset that hid a comedy under the trappings of a rom-com carried over to the disc, as the Blu-ray features Ephronic animated menus which offer a choice to watch the film, select scenes, adjust the set-up and check out the special features. Audio options include English 5.1 DTS-HD Master Audio and Spanish 5.1 Dolby Digital tracks, while subtitles are available in English, English SDH and Spanish.

The Quality
The 1.78:1, 1080p, AVC-encoded transfer on this film features the bright, vivid presentation you'd expect from a modern romantic comedy, with well-saturated colors and appropriate skin tones (despite shooting for fall in Brooklyn in the middle of summer.) The level of detail is very high, showing off nice textures in the New York settings, though sometimes things soften out a touch, which may be part of the film's visual spoofing of the genre. The black levels are deep and there are no obvious concerns regarding digital distractions.

Like your average romantic comedy, They Came Together doesn't feature a room-rocking audio presentation, with the DTS-HD Master Audio 5.1 track offering up enhancement for the film's score and soundtrack in the sides and rear, along with some light atmospheric effects. Though the film's most important element, the dialogue, is crisp and clear, don't expect anything dynamic out of this track, nor anything bombastic, with the low-end keeping an expectedly low profile.

The Extras
Wain and Showalter get things started in the bonuses with a feature-length audio commentary, where they discuss the development of the script and share details about the short, low-budget production of the movie. Longtime friends, they have a somewhat awkward, yet comfortable relationship, with Wain taking the lead for the most part. They cover a lot of interesting areas, including discussion of the various rom-com tropes that are skewered in the film.

A meaty featurette, "They All Came Together" (23:59) digs into the film's origins and the production effort, via interviews with Wain and Showalter, as well as the majority of the main cast (Hader, Poehler, Rudd, Black, Meloni, Greenfield and Mantzoukas) and DP Tom Houghton. There are some good stories and jokes here, including talk about Marty Scorsese's involvement with the film. The most interesting element discussed here though is how Hader and Kemper became involved in the film

For real comedy geeks, the true jewel here is the full-length table read (1:43:58) which took place at the San Francisco Sketchfest comedy festival. This reading was of the original script of the movie, which reveals several changes that were made before shooting, and involves a different cast than the one that shot the film. As a result, Molly is read by Zandy Hartig (Childrens Hospital) rather than Poehler (who plays the best friend), Hayes takes Smulders' place and Joe Lo Truglio, Rachel Harris, Phil LaMarr and Marguerite Moreau take on other roles in the script. It's great to see what's essentially an alternate version of the film, and it also shows how important the dinner framing device really is.

Wrapping up the on-disc extras is the film's theatrical trailer (2:24), along with several other Lionsgate previews.

Also in the package is a code for a stream and download of the film. 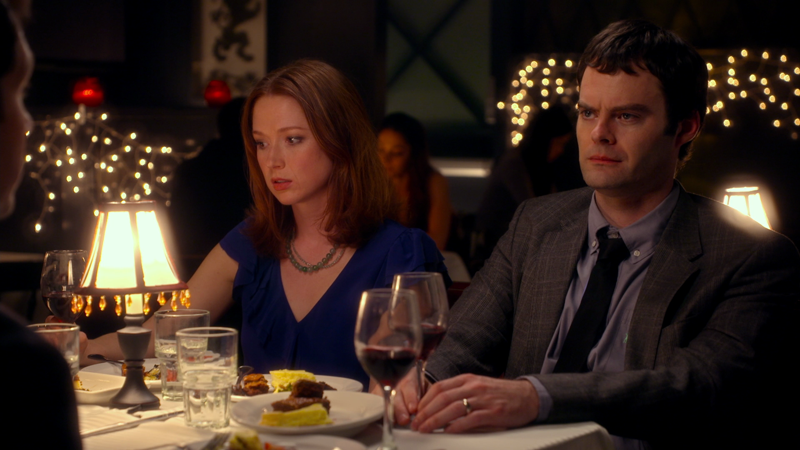 The Bottom Line
There's a simple way to tell whether you're going to enjoy They Came Together: consider whether you enjoy Airplane!, The State and Wet Hot American Summer. If you did, you'll probably enjoy this film, and at the very least, you'll enjoy seeing the terrific cast at work. If you don't enjoy those three comedic gems, you should probably take a long, hard look in the mirror and think about where life has led you and how you can get back on track. This release looks and sounds great, and has a healthy, entertaining and highly interesting spread of extras for comedy geeks to devour. Worst comes to worst, you get to enjoy Poehler and Rudd for 84 minutes. All movies should aspire to such worst-case scenarios.