Kino // Unrated // September 23, 2014
List Price: $29.95 [Buy now and save at Amazon]
Review by Stuart Galbraith IV | posted October 1, 2014 | E-mail the Author
I didn't much care for Run Silent Run Deep (1958) when I first saw it during the early days of DVD. Part of the problem was MGM's unimpressive video transfer, which was in unenhanced 1.66:1 widescreen. Also, given that Robert Wise directed it and Clark Gable and Burt Lancaster starred, the film's clichéd storyline seemed beneath their talents and my expectations.

However, I liked Run Silent Run Deep a whole lot more watching it again on Blu-ray. For one thing, the high-def transfer is light years ahead of the old DVD. The added clarity and film- rather than video-like picture enhance several of Run Silent Run Deep's best attributes. Also, having already been disappointed with the film's plot, I was better able to appreciate the movie's other qualities, making for a much more enjoyable viewing experience. The plot may be overly familiar and, at times, a little tiresome, but there's no question that this is a slickly made, imaginative film in other ways.

There's some confusion over the film's original theatrical aspect ratio, as well as its presentation on Blu-ray. The back cover text lists 1.85:1 widescreen but the transfer is definitely 1.66:1, as was MGM's earlier DVD. Further, widescreen authority confirms Box Office magazine listed this at the time as being 1.85:1. (Thanks, Bob!) Of course, the different between 1.66:1 and 1.85:1 is relatively slight, less certainly than Kino's obvious bad judgment in releasing another Hecht-Lancaster production, Marty, in 1.37:1 "full-frame" format rather than its original 1.85:1 widescreen.

In the case of Run Silent Run Deep (no comma in the onscreen title), it's possible a 1.85:1 transfer might have helped make all the scenes aboard its submarine, virtually the entire film, all the more claustrophobic, but the compositions don't suffer noticeably. Moreover, most of the time the images are impressively sharp with good contrast, and there are no audio synchronization problems of the sort that have plagued several other MGM-licensed Kino releases, including the recently-cancelled Black Sabbath. 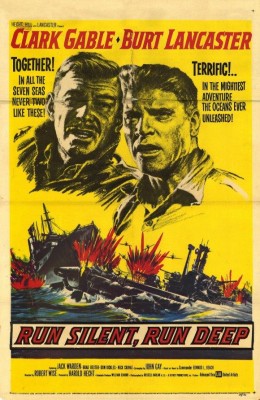 The movie opens with a pre-titles sequence, rare in 1958. In 1942, U.S. Navy submarine Commander P.J. Richardson (Clark Gable) loses his sub to a Japanese destroyer, the Akikaze, in the Bungo Straits. He and some of his crew are rescued, but Richardson is reassigned to a desk job. Over the next 12 months, the same destroyer sinks three more subs in the region.

Richardson finagles his own experience with the Akikaze, disastrous though it was, to a new command aboard another sub, the Nerka. However, both its crew and Executive Officer (XO), Lt. James Bledsoe (Burt Lancaster), had fully expected the much-liked and respected Bledsoe to captain the Nerka on its next mission. A bitter Bledsoe asks for a transfer, but Richardson refuses, wanting the experienced lieutenant commander to stay on as XO.

Naturally, the crew resents Bledsoe's taskmaster replacement, who puts them through an intensive training program of rapid dives and torpedo launch drills. Conversely, Richardson seems to be avoiding obvious opportunities to sink various Japanese ships, prompting the disheartened crew to accuse their captain of being a "drill coward." (With Gable in the lead, however, is there ever any doubt that he's not?) The Nerka is assigned to patrol "Area 7," a veritable graveyard of Allied submarines, though specifically ordered to avoid the Bungo Straits.

Soon, however, Richardson's intensions become clear: He's been training his crew for a risky, untried maneuver to launch torpedoes in the direction of the enemy's bow, as the two ships are on a collision course. It becomes obvious to all that Richardson plans to take on the Akikaze once again, despite explicit orders to avoid the Bungo Straits entirely.

The movie then tells a story all too familiar to military movies of this type: an obsessive older captain pulls strings to take command away from a hard-working junior officer who's paid his dues and then some. Bitterness is followed by growing unease as the obsessive older man endangers his crew for personal reasons, almost always either to prove to himself that he's still capable or, as in this case, to settle an old score. (The same premise drives another Robert Wise film, Star Trek: The Motion Picture.) Even ads for the film acknowledged this well-worn plot, comparing its story to books and movies like Moby Dick and Mutiny on the Bounty, the popular film of which had, of course, starred Gable. The film is also reminiscent of The Caine Mutiny (1954), a big and recent success; both stories have the crew desperate yet uncertain about how they can replace their dangerously driven commander.

The clichéd plot is compensated by Gable's and Lancaster's performances. Both actors have charisma to spare, and Gable particularly brings to the film the weight of his long career, and subtlety found in many of his late-career roles. More than them, though, is the authentic feel to the submarine and its operations, among the most technically accurate in such pictures to date. Director Robert Wise strove for an unprecedented degree of authenticity, utilizing several submarine veterans as advisors. Further, real submarine instruments (not studio-created set decoration) were incorporated into the sets. About par with René Clément superb film The Damned (Les Maudits, 1947), Run Silent Run Deep is among the most realistic submarine movies until Wolfgang Petersen's Das Boot (1981). One only need compare this to other, frequently ludicrous submarine films of the time (Atomic Submarine, Voyage to the Bottom of the Sea) to see the difference.

The imaginative use of miniature effects adds to the film's effectiveness. Though variable, Wise mostly shows enemy ships only from a great distance using long lenses, as the crew of the Nerka would have spied them. Some of the effects are rather clever, such as one heart-stopping moment when a depth charge lingers on the Nerka's hull, before finally sliding off moments before it explodes. The scale of water droplets gives the effects away in some shots, while in others wires manipulating the submarine and torpedoes in underwater scenes are visible, but for 1958 the special effects are unusually good.

Wise, a former editor who'd worked on Citizen Kane and The Magnificent Ambersons before becoming a director at RKO, maintains a taut pace (the picture is only 93 minutes long), with several standout scenes. In one, a crewman (Nick Cravat, a longtime friend of Lancaster's, in most of the latter's films) is trapped on deck during a crash dive, prompting an emergency rescue. (The scene cleverly makes use of Cravat's background as a circus acrobat, where he had partnered with Lancaster.) The death of another crewman is quite shocking by 1958 standards and still unsettling even now, and the film is surprisingly grim at times: hoping to fool the destroyer into thinking the their sub has been destroyed, Richardson orders oil, papers, clothing, and other expendable debris flushed through the torpedo tubes. "The men that were killed," he adds, "Send them up through the tubes."

Except for third-billed Jack Warden, playing Richardson's only ally aboard the sub, the rest of the cast mainly act as a kind of Greek chorus reacting to what essentially is a two-man drama, though they're also there to take an even more extreme position than the more cautious, by-the-book Bledsoe. The movie was, somewhat famously, Don Rickles's first movie role. He's good, but the script reins in his signature brand of humor for the most part. Brad Dexter, Joe Maross, and Rudy Bond have more prominent parts. Pretty Mary LaRoche has a small part as Richardson's wife, a role of the type that seems to exist solely to get a woman's name in the credits and on the poster. (As Sergei Hasenecz writes, she does serve to humanize Gable's character a teeny bit, but mostly she exists to give the film at least one female character.)

As noted in more detail above, Run Silent Run Deep's box art promises a 1.85:1 widescreen presentation but the image is 1.66:1. Either way it's a good transfer, the black-and-white film appears to have been mostly sourced from the original camera negative, with a few sections here and there replaced with secondary elements. English subtitles supplement the strong DTS-HD Master Audio 2.0 mono soundtrack, which is in synch throughout. The disc is region "A" encoded. The only Extra Feature is a trailer, in high-def.

More entertaining than I had remembered, despite its overly familiar plot and characters, Run Silent Run Deep looks very good on Blu-ray and thus Recommended.