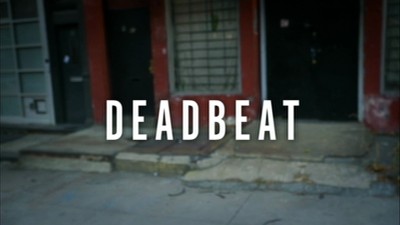 
The Show
Travel back in time with me. The year--2007. Fifth network The CW decides to cast their lot with the pairing of Tara Butters and Michele Fazekas (who would go on to produce the popular reboot of Hawaii 5-0 and the upcoming Marvel series Agent Carter) with director Kevin Smith, and the result is the series Reaper, about a young man who learns his parents sold his soul to the devil, and now he must work as a bounty hunter, collecting the souls of those who have escaped hell. An action comedy, the show featured a scene-stealing Canadian named Tyler Labine, who has carved out a neat little niche for himself over the years as something of a non-musical Jack Black.

Why mention this in a review of his latest series, Deadbeat? Well, there are a lot of similarities between the series, both of which serve up a fun mix of genres for fans of sci-fi tinged comedy. Like Reaper, Deadbeat builds a background mythology across a series of self-contained adventures, as Pac (Labine), a ne'erdowell pothead with the ability to communicate with the dead, tries to help a different spirit in each episode, and make enough money to pay his rent and his friend/drug dealer, Roofie (Brandon T. Jackson, Tropic Thunder. There's also the matter of Ray Wise showing up (the Devil on Reaper), but tonally, the shows are at least related. 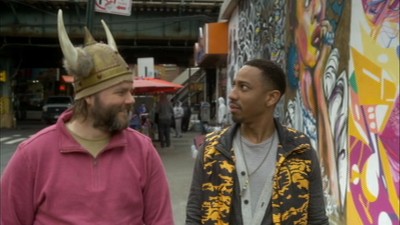 Avoiding the need to explain how Pac got his ability or give him much of a backstory, we instead dive right in, getting to see him at "work" and seeing his interactions with Roofie, but soon he crosses paths with Camomile (Cat Deeley, So You Think You Can Dance), a medium-cum-franchise without any real clairvoyant ability, but with a serious mean streak, especially toward her put-upon assistant Sue (Lucy DeVito.) Pac is infatuated with Camomile, despite how she attempts to destroy him, but as their paths cross repeatedly, her dismissal of him becomes a rivalry, as his true skills are a threat to her empire.

For most of the season, episodes feature a new spirit for Pac to help find closure, before they can move on, and those missions are the core of the show, but the guy's friendship and the girls' competition build toward the final two episodes, where everything comes to a head, truly establishing the world of Deadbeat. With all the pipe now laid, the second season should hit the ground running, but that doesn't take anything away from this season, as the ghostly guests are a lot of fun, like a hot dog-eating champion whose stomach is transplanted into an orthodox Jew, a stand-up comic who has adapted his material to the afterlife well and the ghost of Rube Goldberg. There's also an odd little creature that makes several appearances alongside Pac with no attempt at any type of explanation. Its oddness and randomness are just parts of its weird charm (kind of like the show itself.)

The sense of humor here is a bit twisted and leans toward the ribald, like an apparition whose scary appearance is undone by a wardrobe malfunction or a session of ghostly oral copulation, and that absurdity serves the show well, keeping the viewer from getting too comfortable with what's happening. One never knows when a visit from a gang of Scandinavian hit-men is coming or if there will be an episode-long parody of American Apparel and its sleazy founder (courtesy of a wonderfully gross Jason Biggs.) There's a good balance of service to the story and ridiculousness.

Director Troy Miller (whose resume includes a ton of greatness, including Mr. Show) established a fun, silly style to the series, though it can feel a bit lackadaisical at times. He's aided in the effort by a wonderful cast. Pac is right in Labine's wheelhouse, but that doesn't mean he's coasting, and his chemistry with Jackson raises their characters above the standard user and dealer roles. Deeley is just evil as Camomile, a part that's a bit one-dimensional at this point, with nothing that redeems her awfulness, but she does serve to bring us Sue, given adorable, big-eyed life by DeVito, who was destined to steal hearts in a show like this. Beyond the core four, it seems like Miller's career has provided him with expected clout in the industry, as the guest cast, beyond the aforementioned Wise and Biggs, is loaded with notable names from the world of comedy, including Samantha Bee, Megan Neuringer, Todd Barry, Godfrey and Iliza Shlesinger 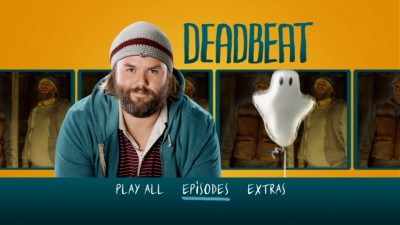 The DVD
The 10 episodes of the first season of Deadbeat are held on one DVD, which is packed into a standard keepcase with an insert featuring an episode guide .The disc features an animated anamorphic-widescreen menu with options to play all the episodes, select shows and check out the extras. There are no audio options or subtitles, though closed captioning is included.

The Quality
Opening this set and seeing just one disc was a surprise, considering the 220 minutes of episodes it includes. Normally, 10 22-minute episodes would dictate a second platter, but that was not the route taken here. The results are not dramatically bad, but you'd like to think the show could look a bit better. Color is fine, looking appropriate throughout, but the level of fine detail is a bit low, with a somewhat soft-looking image, and there are some issues with compression artifacts, particularly during scenes with a lot of movement (which is admittedly not Deadbeat's forte. Nothing jumps out as being noticeably bad, but it's certainly not at the level you'd expect from a modern TV show.

These episodes are presented with Dolby Digital 5.1 tracks, which do a fine job of presenting the dialogue crisply and clearly, while also making good use of the surrounds, where you'll get atmospherics and sound effects, as well as well-separated channels from the dialogue and the score by Smashing Pumpkins co-founder James Iha. There's not much in terms of dynamic mixing, but the placement in the sides and rear is nicely done. It's worth noting that these episodes are censored (with bleeping), but it's somewhat selective, as some words that made it through intact would certainly raise an eyebrow of two.

The Extras
The extras consist of a trio of very short featurettes, starting with "Medium for Hire: What is Deadbeat?" The brief (1:50) piece is a quick and dirty overview of the show, as described by the main cast (minus Jackson.) Labine does most of the work in what's essentially EPK material..

Two featurettes are presented under the label "The Characters of Deadbeat." Up first is "Meet Pac and Roofie" (2:09), which focuses on the show's "heroes," through interviews with Labine, Deeley and Jackson. "Meet Camomile and Sue" (2:41) does the same for Deadbeat's leading ladies, with DeVito swapping in for Jackson. Nothing here is too in-depth, which is disappointing for anyone curious as to how things work with a Hulu original series.

Also included is a code for a digital download of the series, which is weird, when you consider it aired first on Hulu, but is now on DVD, with the circle completed by a code to once again get it online. 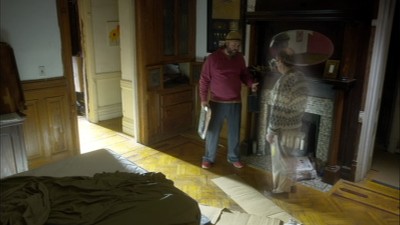 The Bottom Line
If you like Labine, then you'll likely like Deadbeat, a spiritual descendent of his previous series, the gone-too-soon Reaper. This first season is a bit of an origin story, without actually succumbing to the pitfalls of that genre, setting you up for a second storyline neatly while still being entertaining on its own. On DVD, the show looks and sounds fine (even if 10 episodes are a bit much for a one-disc set) but the paucity of extras is disappointing. If you don't have Hulu Plus, it's worth it to give this one a look, as it's got a lot to like about it.