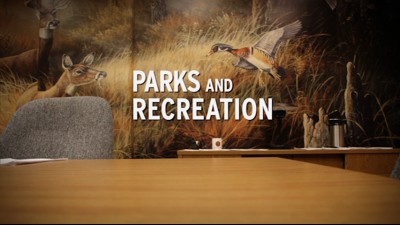 
The Story So Far...
A sort-of spin-off from The Office, taking the office documentary concept rather than any character, Parks and Recreation turned the cameras on government workers in tiny Pawnee, Indiana and introduced us to overachieving Leslie Knope (Poehler) and her team of well-meaning goofballs. The series is headed into its seventh and final season, and the first five seasons have been released on DVD. DVDTalk has reviews of all five sets.

The Show
For fans of Community, not knowing the fate of the series made the summer following the show's fifth season a miserable time. Sure, the show would have had a fine send-off, but it was the not knowing that was the toughest part. The seventh season of Parks and Recreation will offer no such issues to its fans, as it's already been announced that this will be the end of the line. It will be tough road to travel though, as season six had the feeling of a show saying goodbye, including an ending that would have left fans quite happy as a last moment in Pawnee.

After a trip to London to start the season, this year centered around Leslie's attempt to merge the town of Pawnee with their bankrupt rivals in Eagleton. Her political exploits result in her being targeted for recall from the city council and eventually drive her to consider leaving the parks department and her ungrateful constituents for a better opportunity. All the struggles she faces parody troubles in politics in reality, whether it's the filibuster that's reminiscent of Wendy Davis' effort in the Texas Senate, Councilman Jamm (Jon Glaser) and his effort to manufacture scandals (even referencing Benghazi) or the battle to put Fluoride in the water, which is blocked by lobbyists, special interests and general stupidity (the formula behind the anti-vaccination movement.) By targeting concepts rather than specific people or events, Parks and Recreations offers some of the sharpest political commentary this side of The Colbert Report.

Of course, this show is intended to be funny, and it does that tremendously well, thanks to a blend of absurdity, wonderful characters and an incredible cast, led by Poehler and Adam Scott, who plays Leslie's husband and co-worker Ben. Together, they are a delightful pairing, full of nervous energy and earnest positivity, and they set the tone for the show, a mix of adorable and awkward. It'd be hard to pick the next best thing, because the remainder of the ensemble cast is so wonderful, be it Aziz Ansari's hipster hustler Tom, dark imp April (Aubrey Plaza) or secret weapon Donna (Rhetta.)

However, there are two leaders of the supporting pack, the sweetly-special Andy (Chris Pratt) and the gruff Ron Swanson (Nick Offerman.) Both are hysterical in very different ways, with Pratt delivering the show's purest comedy, moving through the show like a bounding puppy ready to slobber all in his path, while Offerman is like the Wolverine of the series, appearing just often enough to make you look forward to his next appearance. They both live on planes of existence entirely of their own, enhancing the sense of absurdity the show revels in at times, and by being so different, they both end up as stand-outs. Each earns a handful of healthy laughs in every episode they appear in. 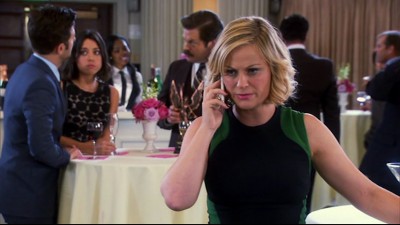 The show said goodbye to a pair of main characters around the midpoint of the season, as Chris (Rob Lowe) and Ann (Rashida Jones) moved away, taking Lowe and Jones away from the series. This could have been a real blow to the series, removing Leslie's best friend from her support network, and truthfully their final episode had the feeling of a series finale (a sentiment enforced by online responses to the episode.) However, the show responded by finding new pairings to enjoy, particularly April and Donna and Andy and Ron. The merger of Pawnee and Eagleton also brought some new characters into the show, including Sam Shepard as a hippie analog of Ron and a new team member named Craig, played with trademark bombast by Billy Eichner (Billy on the Street.) There may not be a lot to the character beyond his usual short-fuse explosions, but that dynamic fits in beautifully with the rest of the Pawnee crew. An assortment of great guest stars round out the show's ranks, including Henry Winkler, Ben Schwartz and Jenny Slate (as the worst family in Pawnee), Peter Serafinowicz, Kristen Bell, June Diane Raphael, Erinn Hayes, Kathryn Hahn, Dan Castellaneta, John Hodgman, Rob Huebel and Bo Burnham.

The final episode is a just-about-perfect series finale, bringing to completion the Pawnee-Eagleton storyline, with a big concert featuring The Decemberists, Wilco's Jeff Tweedy, a brilliantly-disguised Yo La Tengo and a pair of pitch-perfect connections to the show in Letters to Cleo and Ginuwine. It also offered the main characters clean wrap-ups to their storylines, and offered a last-minute twist on top of it that sets up the next season in an interesting manner. It would have been a perfect finale if the show ended there. Now, the challenge is to offer a great last ride for a show that ended almost perfectly--twice in one season. 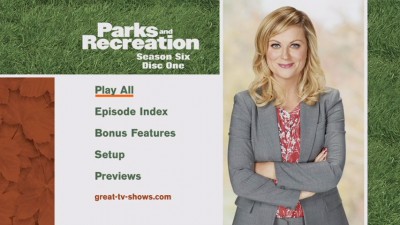 The DVDs
Packaged in a clear single-width keepcase with a two-sided cover and a dual-hubbed tray (all held in a slipcover that repeats the cover art), the 22 season-six episodes are spread over three DVDs. The discs have a static, anamorphic widescreen menu, with options to play all the episodes, select shows and check out the extras. There are no audio options and no subtitles, though closed captioning is included.

The Quality
These episodes, presented in anamorphic widescreen, don't look at sharp and vivid as they do during the show's HD broadcasts, but these standard-definition transfers are the next best thing, offering appropriate color and a nice level of fine detail. The image is free of any notable defects, and compression artifacts are not a concern. A very nice DVD delivery.

The show is presented with Dolby Digital 5.1 track, but don't expect any kind of aural gymnastics from this faux-documentary series. Dialogue is clean and strong, while the surrounds get some atmospheric work and boost the music. You're not getting much in the way of dynamic mixing, though some positioning is evident, and the low-end kicks in at appropriate times (like in "The Prom".)

The Extras
As is usually the case with this series, the key extra is the deleted scenes. Spread over the three discs and organized by episode, there are 54 scenes in all, for a total of over 52 minutes of footage. Among the highlights are Scott as himself doing an intro, his insane reaction to Leslie's anniversary present, a classic Andy freakout, some excellent improv runs and a legendary P&R moment, as Johnny Karate sings "The Story of Sudden Death (Jean-Claude Van Damme)." It's a must-see.

If all you navigate are the bonus features menus, you'll miss a few extras, as there are three extended producer's cuts, for "Second Chunce," "Flu Season 2" and the season finale "Moving Up", available in the episode selection menus. The inclusion of the extended finale, which runs a full 10 minutes longer than the one that aired, is especially appreciated, since the original cut left one of the more interesting plotlines unfinished.

As part of NBC's unusual scheduling of the show, webisodes were released to keep fans interested between episodes, and those clips are included in this set. "Parks and Recreation in Europe" (9:04) has five entries shot on location during the show's season-opening two-parter. There's some good stuff in here, like Leslie, Ron and April sightseeing in London (with a Jack the Ripper focus) and Andy at Stonehenge, trying to list the seven wonders of the world. They are followed by "The Hapley Group" (5:06), a parody of Sunday-morning discussion shows hosted by Pawnee TV personality Perd Hapley. Bringing together some of the show's side characters, Joan Callamezzo (Mo Collins), Mike Patterson (Seth Morris) and radio hosts Crazy Ira (Matt Besser) and the Douche (Nick Kroll.) They chat about local issues in their usual wacked-out manner, with Crazy Ira and the Douche dominating the show. There's even a commercial break with an ad for a local farmer's market.

More hiatus content is available in the form of three Winter Games promos (1:02), which NBC ran to promote the show and their Olympics coverage. These are fun and silly. You've also got some content partially seen in the show, with the full T-Dazzle commercial, starring Tom, and the full Chipp McCapp music video for "Beautiful Like My Mom (Support the Troops)" with Bo Burnham. Unfortunately, this video shows that the song was limited in scope, with lots of repetition in the lyrics. It is however a great parody of dumb, condescending country songs.

This season, the show celebrated its 100th episode, a moment commemorated in a 20:33 featurette that starts with creator Mike Schur and Poehler addressing the media, before spending time with the cast as they share their favorite moments and characters, including their love of Pratt. Plus, Perd Hapley sings! And, naturally, Plaza acts like the weirdo she is. It's followed by a brief (1:52) tribute to Jones and Lowe, "Rashida and Rob Goodbyes," which shows the cast and crew celebrating the last scenes they shot on the series.

Wrapping up the extras is a mammoth 19:29 gag reel that's more than a gag reel, which includes a remake of the opening credits starring Lil' Sebastian, plenty of funny flubs, commercials for Tom's Bistro and Chipp McCapp, and some bonus ewok action. 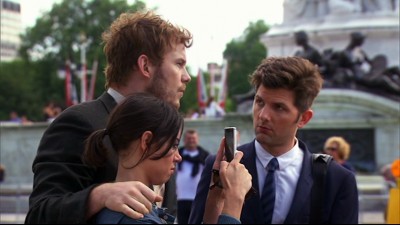 The Bottom Line
There's been a lot of talk that the next season is the right time for Parks and Recreation to say goodbye; that there aren't a lot of stories left to tell in Pawnee. However, six seasons in, these episodes show that the series is as good or better than it's ever been. The DVDs look and sound great and boast a nice pile of bonus content for fans to enjoy. This is one Parks and Rec viewers will definitely want to own, while newcomers can jump in with ease. This is probably the high point of the show's entire run.