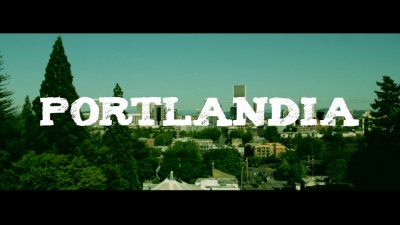 
The Story So Far...
Fred Armisen didn't constrain his sketch-comedy output to SNL, and the result was the IFC series Portlandia, a collaboration with Sleater-Kinney guitarist Carrie Brownstein. Four seasons have aired on IFC, and the three previous seasons have been released on DVD and Blu-ray. DVDTalk has reviews of two of the three releases.

The Show
Traveling back to Portlandia sees Armisen and Brownstein in peak form, still finding plenty about the City of Roses to make fun of, be it the plethora of music performances, the so-called "sharing economy" or the quirky lives of hipsters. The targets haven't changed much since the show first hit the air, but plenty of angles remain for the series to lampoon. As good as the targeted comedy is, like a sketch making fun of concert tailgaters (who pre-game for "Prairie Home Companion") or a bit about Portland parking and the need to make the most of the time, the show does some of its best work when it keeps the topic more general (at least for this non-PDX native.) A short sketch about how happy our relationships with dogs are might be the most entertaining bit all season, while another, an awards show for videos promoting Kickstarter campaigns, offers a great setup for a variety of jokes (and should take the place of SNL's many talk shows and game shows.

The thing that is most interesting about Portlandia is the way it approaches sketches. Few sketch shows generate the energy that this show whips up in a segment, through a mix of snappy pacing and whip-quick editing (as well as cartoonish sound effects that raise the simplest sketches to new levels of ridiculousness.) Every sketch is only as long as it needs be, sometimes popping in and out quickly to hit a gag, particularly the "podbusters", which are ads for the Portland Pet Haven this season, while some are spread over the course of an episode, like the story of the celery guy (Steve Buscemi) or a variety of adventures in New Beavertown. Unlike the big names, Portlandia is the master of graceful exits. 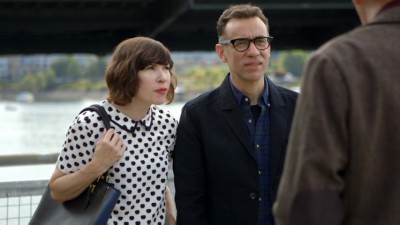 The show may be more about the feel of the city of Portland rather than any people in the city, but it does embrace a few characters who make repeated appearances. Returning this season are some of the show's most-represented characters, including mid-life couple Peter and Nance, angry biker Spyke, who has to give in to Big Auto, feminist book-store owners Candice and Toni, who go on a females-only road trip and the gender-swapped duo of Lance and Nina. When it feels like these characters have been taken about as far as they can go at this point, though pairing Candice and Toni with the NBA's Portland Trailblazers is about as great as anything the show has done in its four years, and expanding the story of Peter and Nance was done quite well.

Though Portlandia is obviously the Fred and Carrie show, but they continue to make great choices when it comes to supporting castmates, calling on a few great guests, including Jason Sudeikis, Nick Swardson, Vanessa Bayer, Ed Begley Jr. and the ever-wonderful Maya Rudolph, as well as a number of musical artist pop-ins, like Tunde Adebimpe (TV on the Radio), Josh Homme (Queens of the Stone Age), Duff McKagan (Guns N Roses), Annie Clark (St. Vincent) and Jeff Tweedy (Wilco). Two guests makes multiple appearances though, fitting in like third members of the team, and that's Kumail Nanjiani and Jeff Goldblum. Both work brilliantly with Armisen and Brownstein and deliver some of the most memorable characters of the season, like Goldblum's furniture salesman and Nanjiani's human bandwidth manager. If only we could get another series with those two together. 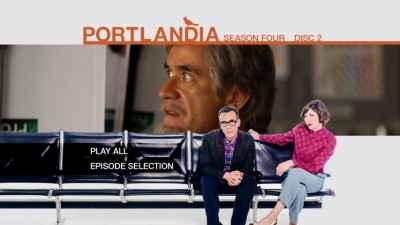 The Disc
The 10 episodes of Portlandia's fourth season arrive on two DVDs, which are in a DVD-sized cardboard folder, held in a cardboard slipcover (packaging that fits tonally with the show.) The discs feature animated widescreen main menus offering a play-all option and episode selections. There are no audio options nor are there subtitles, but closed captioning is included.

The Quality
The anamorphic widescreen transfers are solid, capturing the look of the show well, with appropriate color, solid black levels and a reasonably high level of detail, though it can be a bit soft with some minor buzzing in flat areas. The show plays with style a lot, so there are a number of different looks, and those visual techniques come across well on these DVDs, with no notable issues with compression artifacts.

You're getting Dolby Digital 2.0 tracks on these DVDs, which is surprising in a surround-sound world, but it's at least consistent, as this has been the case with Portlandia's releases since even the first Blu-ray. The show is most about dialogue and odd sound effect, and those parts are strong and clear, but the music, which is a relatively present ingredient, could use some emphasis. There's nothing problematic about the sound, but it isn't the dynamic presentation you'd expect today.

The Extras
The first-season release was loaded with extras. Season Three had a few deleted scenes and a fun piece with Nanjiani. This time? Nada. Considering the second disc holds only three 22-minute episodes, you'd think they could have filled that space with something. 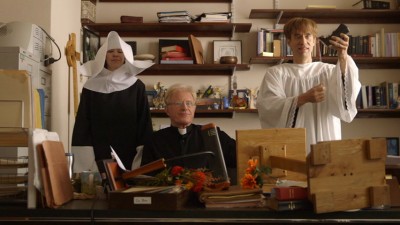 The Bottom Line
Portlandia remains an entertaining and incredibly well-made sketch series, but in looking at the fourth season, it feels more clever than hilarious, which is probably thanks to the subjects it focuses on. The set looks and sounds fine, however there's nothing in terms of extras, which gives you less reason to pick this up, unless you really want to own the episodes. It's good stuff, but the set could try harder.