While AMC was putting the viewer through some emotionally taxing yet memorable television in Breaking Bad, we (or at least I) resented them for drudging up some dumb show called Low Winter Sun, withholding preview clips of the former so that people would stick around for the latter. The life of the show could be marked with an egg timer and in December, 2013, the show was mercifully cancelled. So now that the show comes out to video, let us look to see if it was given a raw deal, shall we?

Chris Mundy adapted the British miniseries from 2006 for American audiences and fortunately for the show, Mark Strong (Blood) reprised his starring role also. Strong plays Frank Agnew, a police detective in Detroit who, along with his partner Joe Geddes (Lennie James, Colombiana), murder a fellow police officer, one who was being investigated by an Internal Affairs officer (David Costabile, Breaking Bad). The dead cop has ties to a Detroit crime boss named Damon Callis (James Ransone, Generation Kill) who, along with his wife Maya (Sprague Grayden, Paranormal Activity 3), are expanding their empire. The show follows Frank as he attempts to stay out of trouble while attempting to search for his once-presumed dead girlfriend, and Damon as his business gets more tenuous, while Joe tries to balance connections to both sides of this dangerous house. 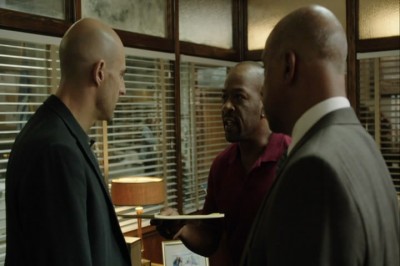 The skills and respective performances of formidable actors like Strong, James and Ransone are given quality displays over the course of the season, and Strong's work in the next to last episode "Ann Arbor" is particularly good. He realizes that the walls are closing in on the facades he has constructed, and save for a minor (and I note, somewhat unnecessary) heart attack, his work from beginning to end of the episode is the best of the show. James has similar conflicts to deal with in his character and manages to navigate them and his work and family lives fairly well and his performance over the show may be better than Strong's.

However, it cannot be stated enough that Low Winter Sun in its American skin was put together not as effectively as it should have been. Consider that the British version was only two episodes and the American version was ten, one can sense very early on that the American version checked off the requisite boxes in terms of adaptation, but did little else to distinguish itself or create some sort of mythology of its own. Outsiders to the show could not be faulted if they assumed that the show was set in Detroit (it was) or New Orleans (which at times, sure looked like it was). The show did not seem sure of it, for that matter.

Unfortunately, basic things such as that which could understandably give someone not much faith in the show addressing a larger story. Sure, the previously mentioned Strong and others do well in moments that they are given, but the lesser moments are communicated halfheartedly and do not give the viewer any definitive investment into buying into the characters or story. I do not mean to give the impression that "Ann Arbor" is a memorable or even milestone episode, because in a vacuum it is not. But it is the best episode in the show and it comes in Episode 9 of 10, so if you have gotten that far, you had to have been some sort of masochist, this reviewer inclusive. There are a lot of poorly executed, even mundane moments, that the ensemble deserve a bit better. 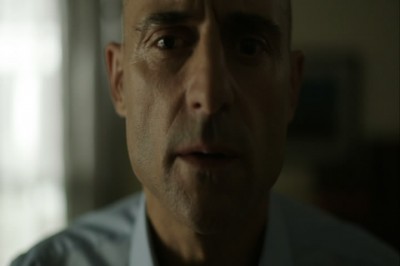 It would be one thing if the collective public's indifference to Low Winter Sun was because they were spent after watching Bryan Cranston, Aaron Paul and Anna Gunn take part in the last few hours of extraordinary television. But Low Winter Sun does little to give anyone any faith that it could have pulled it off, and it started very early on in the show. The result is a show that never seemed to know what it wanted to be, and shrugged its shoulders as a result.


The ten-episode run of Low Winter Sun is spread over three discs, all episodes presented in 1.78:1 anamorphic widescreen and look excellent. Image detail in tight shots and slightly wider ones are better than expected, and color/flesh tone replication is accurate without artificial color pushes or saturation problems. The source material is clean and free of artifacts or image noise and is as clean as can be. Fare the well nice show, you look good on disc.


The Dolby Digital 5.1 surround sound option that graces the show is equally impressive. Low end fidelity is ample and effective, whether it is part of an environmental scene or in the show's blues-influenced theme song. Dialogue is consistent through the show and directional effects and channel panning is present throughout and the listening experience is surprisingly dynamic. For a dialogue-driven show there is a nice little soundstage which accompanies the show.


All of the extras are on the third disc, starting with "A Look At ‘Low Winter Sun'" (4:59), a small featurette where the cast and crew discuss the show and its location. "Detroit Grit" (2:49) discusses the lengths at which to capture the backdrop for the show, while "Designing The Precinct" (5:14) examines the production and set design that gets the main set for the show to appear how it does. Deleted scenes for all of the episodes (25, 18:18) follow and they are slightly underwhelming, and there are small featurettes for each episode which total, run a shade under an hour (52:32). Character motivations are explored, plotlines are speculated, scenes are broken down moderately, and clips are interspersed in. It flirts with some spoiler territory but serve as a nice complement to the show.


Low Winter Sun could have been a decent project for Mark Strong and Lennie James, and there is little doubt that they will get better roles in the future. But Strong could not save his character from being affected (much less the show) from exhibiting a meandering, almost senseless lack of direction or purpose at times, occasionally bordering on the unbelievable. If you are a fan of Strong, James or Ransone I would suggest checking it out, but skip to the last couple of episodes to save yourself the trouble.