Shout Factory // Unrated // November 4, 2014
List Price: $129.99 [Buy now and save at Amazon]
Review by Stuart Galbraith IV | posted November 21, 2014 | E-mail the Author
In the realm of "Complete Series" boxed sets, I can't think of a classic American television comedy more people have been clamoring for than Sgt. Bilko, aka The Phil Silvers Shows, aka You'll Never Get Rich (1955-59), that wondrous military sitcom starring the irreplaceable Phil Silvers. More than eight years ago, Paramount released a 50th Anniversary "Best Of" DVD set chockfull of extra features, but fans were justly concerned that the label might just leave it at that, and indeed a complete first season set wasn't released until the summer of 2010. After that, Paramount seemed to have lost all interest. For the next four years, the show's three remaining seasons sat in limbo.

But now, at long last, comes Sgt. Bilko - The Phil Silvers Show: The Complete Series, licensed by CBS-Paramount to Shout! Factory, a label recently on a tear releasing many hotly-desired but long-orphaned shows. (WKRP in Cincinnati, in its original form, is another example.) Shout!'s Bilko set includes all 142 half-hour episodes and seems to have retained most of the extra features first included on the 50th Anniversary set, while the first season is identical to CBS/Paramount's earlier release, right down to that company's logo appearing on that season's spine.

Overall, this is great news and casual fans of the series should be enormously pleased. However, more hard-core Phil Silvers aficionados are taking note of a near simultaneous British release of the complete series, similarly licensed from CBS/Paramount, by a label called MediumRare. That label apparently went the extra mile to optimize the video masters and/or film elements provided them. The difference between the two releases is pretty stark: the Shout! presentation is acceptable, but obviously sourced from older masters even bearing an old Viacom logo at the end of episodes. Further, the MediumRare release seems to include most of the extras from the Shout! release, plus additional material including a BBC documentary on Bilko, a 32-page booklet, and an extended interview with Silvers. They're in the same price range, so those with region-free players may want to research which release best suits their needs. (Sgt. Bilko was hugely popular in Britain and, as with Laurel & Hardy, Phil Silvers has a larger, more lasting following there than in the United States.) 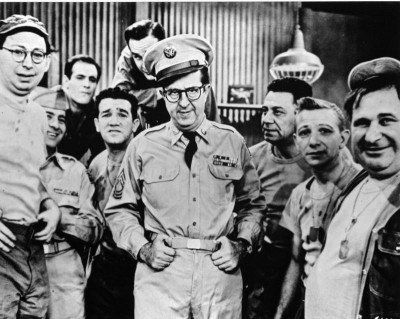 One of the funniest television comedies ever, The Phil Silvers Show is one-third of that great triumvirate of 1950s television comedy that included I Love Lucy and The Honeymooners. Those shows served as templates for countless sitcoms that followed in their footsteps, but Sgt. Bilko was pretty much a one-of-a-kind original, built around its uniquely talented star and the eccentric comic sensibility of series creator Nat Hiken. Both Silvers and Hiken would eventually move on to other worthwhile projects (including Silvers' return to the stage in A Funny Thing Happened on the Way to the Forum and Hiken's hilarious, absurbist cop comedy, Car 54, Where Are You?), but Bilko was essentially a star vehicle impossible to duplicate. This was made thunderously obvious when Sgt. Bilko with turned into a feature film with Steve Martin in the title role, which makes about as much sense as making a movie of The Jack Benny Show with Will Smith.

At Fort Baxter in Roseville, Kansas, Master Sgt. Ernie Bilko (Silvers) runs the camp's motor pool, though there's nary a Jeep in sight. An incorrigible con artist and gambler, Bilko bilks his company of misfits at every opportunity with one outrageous scam after another, from pooling their money to buy a racehorse to betting on how many times an officer's erudite wife (Charlotte Rae) lecturing the men on Beethoven will "twitch," pulling on her girdle.

Aided by loyal lackeys Corporals Barbella (Harvey Lembeck, fresh out of Stalag 17 and several years away from the beach as Eric von Zipper) and Henshaw (Allan Melvin, the Bradys' future butcher and Archie Bunker's pal), Bilko staves off the weary, ineffectual efforts to tame him by long-suffering C.O. Col. Hall (Paul Ford), one of TV's (and the Broadway stage's) great comic foils.

In the conservative 1950s, Bilko was a veritable celebration of vice, populated by ordinary, often dead-broke schlubs in a medium that favored a much more attractive, upwardly mobile middle-class America. Bilko's platoon (like the Bronx precinct on Car 54) was populated by a realistic cross-section of races, creeds, and ethnicities. Where ‘50s war movies featured handsome, Audie Murphy, Ty Hardin, or Clint Walker types, Bilko's platoon consisted of slobs when not outright grotesques. To wit: the slovenly Pvt. Doberman (Maurice Gosfield, reportedly much like Doberman off-camera as well as on), the loveable but hardly-huggable idiot's idiot. Bilko's men were nearly always gullible, unkempt, and lazy, easy marks for his outrageous grifts.

The large ensemble cast, composed of minor nightclub comedians, struggling actors, gambling friends of Hiken and Silvers, ex-boxers and the like, is an amazing fusing of improbable talent, a platoon as imagined by Fellini. Many of these regulars, including Herbie Faye (later a semi-regular on The Dick Van Dyke Show), Ned Glass (former Columbia short subjects bit player), and Billy Sands (onetime umpire), would go on to appear in hundreds of other sitcom episodes. Other semi-regular and one-shot visitors to the motor pool included future Oscar-winner George Kennedy (who began his career as Bilko's military advisor), Joe E. Ross, Fred Gwynne, and Al Lewis (all pre-Car 54), Alan Alda, Dick Van Dyke, and Murray Hamilton. Hiken and Silvers were also sports fanatics who loved putting their sports star pals on the show, sometimes as themselves, often in uncredited bit parts, among them Rocky Graziano, Whitey Ford, Sam Snead, Red Barber, and Yogi Berra.

Tellingly, many of the shows writers and at least two actors went on to create shows and movies of their own, including Broadway icon Neil Simon, Bernard Fein (Hogan's Heroes), Leonard Stern (Get Smart), Sydney Zelinka (various sitcoms and a regular writer on The Honeymooners), and director Mark Rydell.

I would, however, like to caution fans against binging on Bilko. Watching scads of episodes for this review, I was reminded that, like a lot of American sitcoms from this era, one Bilko is pretty much like all the rest. Virtually every episode revolves around the same basic premise: Bilko comes up with a sure-fire scheme to make a potful of dough, conning befuddled superior officers and/or gullible sergeants from other parts of the base into unwittingly participating in his latest outrageous scam. And yet always, on the cusp of receiving some huge fortune in cash, something goes awry and he's always back to where he started by the final fade-out.

That's not so much a complaint as an acknowledgement of Hiken's ability to endlessly recycle this simple premise, varying only slightly the same plot over-and-over again, an argument that could equally be lobbed at The Honeymooners and I Love Lucy. Ultimately, episodes very rarely disappoint, primarily because Silvers is never less than in top form in his persona-defining role. He's always mesmerizing to watch, a true wonder, and his supporting casts, both the series' regulars and its guest stars, always expertly acquiesce to Silvers's performing style as his latest mark, which mostly entails standing next to him looking confused. Nonetheless, Sgt. Bilko is probably best enjoyed in weekly doses, similar to its original run.

Bilko was such a smash both critically and with audiences that it literally became a victim of its own success, and perhaps is the only TV show ever cancelled because it was so popular. To Silvers' eternal frustration, CBS killed it in its fourth year because they wanted to reap the benefits of syndication while the show was still at the top. (Reader Sergei Hasenecz adds, "I have read various explanations as to why the show was cancelled, including the cost of its large cast. But I've also read that after cancelling the show, CBS strangely sold it to NBC, which then profited handsomely by running the show five days a week. Other reasons include Hiken wanting the money syndication would bring, or that he was exhausted or both.")

Shout! Factory's Sgt. Bilko looks acceptable, even on big screens, but it's still a shame they and MediumRare didn't/couldn't pool their resources for an even better release here in America. As mentioned above the first season packaging is identical to the 2010 CBS/Paramount release, with Shout! emulating that style in most respects for seasons 2-4. However, where season one's packaging makes notes of original airdates and provides brief plot summaries, the Shout! seasons note neither, listing only episode titles and extras, the latter all recycled from the 50th Anniversary set. A disclaimer on the back notes "Some episodes may be edited from their original network versions," but this seems to apply only to the fact that these are the original syndicated versions of Bilko, as opposed to episodes actually being cut for one reason or another. The Dolby Digital mono is fine, and optional English subtitles are included.

The Complete Series replicates most but not all of the bonus features included on the 50th Anniversary boxed set with, apparently, one new addition, an interview with Silvers's daughters Cathy, Tracey, and Nancey.

The other material includes a Lost Audition Tape, a 33-minute pilot film preserved as a 16mm kinescope culled from the Nat Hiken Collection. It's virtually identical to "The New Recruits" with one major exception: Jack Warden plays Corporal Henshaw, suggesting that if he had got the part, maybe we'd have seen Allan Melvin in movies like 12 Angry Men while Warden would have gone on to play Sam the Butcher on The Brady Bunch!

A delightful appearance by Phil Silvers and Jack Benny on The Dick Cavett Show, circa 1971-73, is nearly worth the price of the set all by itself; the Original Network Opening and Original Commercials; a Bilko sketch excerpted from a kinescoped TV special, Phil Silvers on Broadway; a 1959 Pontiac Commercial featuring the star; and a terribly lame and labored New Phil Silvers Show Promo: CBS 1963 Fall Preview, which mentions several shows but includes no clips; and a photo gallery.

A sharp but physically very frail-looking Silvers appears in Phil's Final TV Interview with Sonny Fox from 1985, the year he died. In it, Silvers pays tribute to the late Harvey Lembeck and Joe E. Ross ("I think he married 11 times, each time to a hooker").

Alas, most of the cast and writing talent have since passed away, but several of the show's survivors (at least in 2006) provide charming Audio Commentaries: Allan Melvin, who provides brief audio introductions to some shows, also does a full-length commentary track for "The New Recruits"; George Kennedy offers a wonderful, anecdote-filled one accompanying "The Court Martial," while Larry Storch and Mickey Freeman ("Private Zimmerman") talk about "Doberman's Sister" and "Bilko Joins the Navy"; finally, Dick Van Dyke discusses his early appearance on "Hillbilly Whiz."

I didn't notice the following, previously included on the 50th Anniversary set: Bilko's first-ever TV appearance, in a sketch on The Ed Sullivan Show a week or two before You'll Never Get Rich's premiere; clips from the 1956 Emmy Awards; Steve Martin, Dan Aykroyd, and Phil Hartman talk about the show in Nick at Nite Taping/Sgt. Bilko Movie Promos; also from Nick at Nite, Tony Randall and Jack Klugman Remember Bilko; more Emmy Awards clips, this time from 1957.