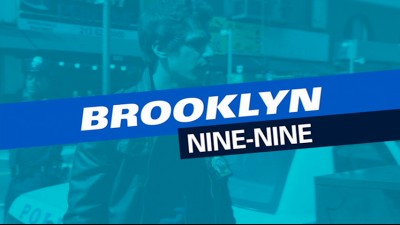 
The Show
The first scene of the first episode of Brooklyn Nine-Nine, with Jake Peralta (Andy Samberg) and Amy Santiago (Medusa Fumero) investigating a burglary at an electronics shop, quickly establishes Samberg's new character: a complete goofball who's also a gifted detective. It also sets up the show's main relationship, the rivalry/tension between Peralta and Santiago, a by-the-book striver who sees Peralta as the main obstacle to her advancement toward being captain. Wasting no time becomes a pattern for a show that gets things going fast, resulting in a Golden Globe in its first season. It's not often that a series comes out of the gate with such a firm concept of what it will be at its peak, or that it would reach what might be that peak so quickly.

The season kicks off with the introduction of Ray Holt (Andre Braugher), the precinct's new captain, a seemingly unusual idea since everything was new to the viewer, but his arrival allows his second in command, Sergeant Terry Jeffords (Terry Crews), to naturally provide him (and the audience) with background on all of the main cast. A no-nonsense cop, Holt offers perfect contrast to the team's hijinks, as well as a core of gravitas to ground all the silliness, and make the police elements of the show play better (while making his own punchlines even better by comparison.) Holt is also openly gay, which isn't an element the show plays up, but it is utilized in the plot (including the introduction of Holt's husband [Marc Evan Jackson]) and the show takes advantage of his presence to play off gay stereotypes. 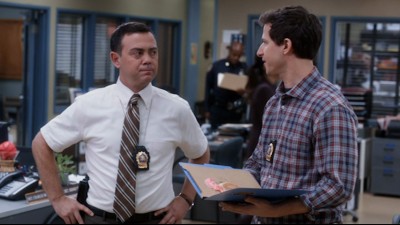 Peralta is the right showcase for Samberg, coming off his sketch success on SNL, as the part lets his silly energy shine, while Fumero's Santiago is a terrific foil, though her nervous, desperate-to-please energy is funny all on its own. The rest of the team is a quirky blend of good but flawed cops, like the angry Diaz (Stephanie Beatriz) and the utter awkward Boyle (Joe Lo Truglio,. and simply awful employees like Gina the administrator (Chelsea Peretti.) The combination of interesting characters and a fantastically funny cast results in great chemistry, no matter who's paired together (particularly if Peretti is involved), though Samberg and Lo Truglio are perfection, with Samberg's brash blockhead working well with Lo Truglio's less-confident sidekick. The show's secret weapon however is Crews, whose muscle-bound cop is quietly susceptible to doubt, resulting in some surprisingly funny reactions, while Beatriz is hysterical, with her short fuse and disturbing aggressiveness.

Though the show gets a lot of mileage out of traditional workplace comedy tropes like dating, professional competition and inter-employee relationships, detectives of the Nine-Nine are not police officers in title only, spending a good amount of time working actual cases, with most episodes built around an investigation. The series mines these moments for plenty of comedy including enjoyable stakeouts, silly undercover identities and a fun take on door-to-door investigating that allows for lots of small fun roles. Seeing the team solve a case is often as enjoyable as the comedic situations that are woven through them (in a good way.) Thus you get episodes like "48 Hours," where Peralta arrests a suspect without an evidence and has just two days to make his case, or "Pontiac Bandit," which sees Diaz and Peralta team up with a witness (Craig Robinson) to catch a car thief.

Later in the season, the show started putting more of a focus on the characters' personal lives, with holiday get-togethers, birthday celebrations and an over-the-top team diet, as well as the will they/won't they duos of Peralta and Santiago and Boyle and Diaz, the latter of which is complicated by Boyle falling for an older woman named Vivian (Marilu Henner) in a storyline that runs through the final third of the season. Though the police work takes a back seat at that later point, eventually making a return in an enjoyable finale that sends Peralta undercover, the series remains a lot of fun, showing that the characters are the most important element, not the situations they're in, the mark of every great ensemble sitcom.

Is Patton Oswalt in it?**
Yes, he is. He plays Boone, a fire marshall and petty rival of Peralta's in a couple of episodes. And, as usual, he's very funny.


**The "Is Patton Oswalt in it?" section is a response to Oswalt's seeming omnipresence in network television. It provides a way to easily compare dissimilar shows on a key criteria. 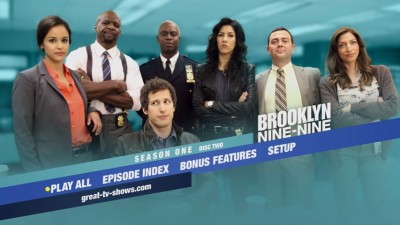 The DVDs
The 22 episodes of the first season of Brooklyn Nine-Nine are spread over three DVDs, which arrive in a clear, single-width keepcase with a dual-hubbed tray, a two-sided cover with an episode guide and a bold embossed, spot-UV coated slipcover. The discs have static anamorphic widescreen menus (which loop the show's theme song) with options to play all the episodes, select shows, check out extras and adjust the set-up. There are no audio options, but subtitles are available in English SDH.

The Quality
Brooklyn Nine-Nine is a very earthy-looking series, with an urban film laying over the image, so the color isn't very vibrant, but the anamorphic widescreen transfer is clean and well-detailed, and is free of any concerns about compression artifacts, though it's not the sharpest ever, with a soft cinematic feel. For SD, it's a fine presentation that won't cause any complaints.

A dialogue-heavy sitcom, Brooklyn Nine-Nine doesn't feature a lot of opportunities for exciting audio (outside of some occasional police action and musical moments) however the Dolby Digital 5.1 tracks do have their moments, with some quality separation between the surround channels, while the dialogue lives, clean and clear in the center channel. The low-end isn't particular present (a result of the show's structure), but it's all you'd expect from the series.

The Extras
The extras are disappointing, simple due to the lack of any insight or participation on the part of the cast or crew (especially when Universal does such a nice job with their Parks and Recreation DVDs with the same show producers.) All that's included is a spread of deleted scenes, 26:22 in all, presented by episode (for those that have them) or they can be played all at once. It certainly feels like these were purely victims of time limits, as there are some very funny moments here, and nothing that wouldn't have been worth including in the episodes that aired. 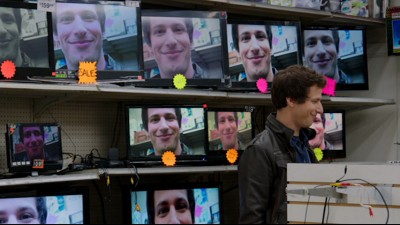 The Bottom Line
Brooklyn Nine-Nine is the rare show that emerges fully-formed from its first episode, a hilarious ensemble comedy that manages to tell some interesting, entertaining police stories while earning its laughs from the interactions of the characters. The quality is solid (though sadly not hi-def) and the extras, though sleight are entertaining. With so many great ensemble comedies wrapping up lately, hopefully Brooklyn Nine-Nine will be on the best for years to come.