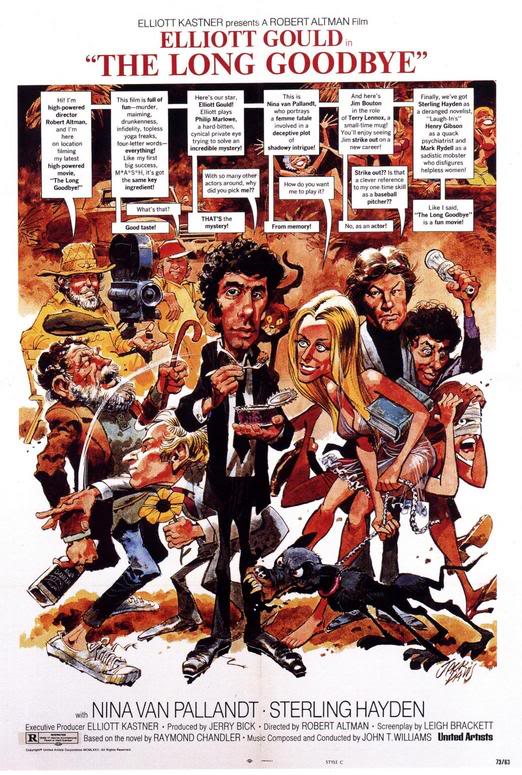 When most people think of Raymond Chandler's work, they think of Humphrey Bogart as private eye Philip Marlowe in the 1946 adaptation of The Big Sleep. Since then, a handful of films have revisited and updated Chandler's iconic gumshoe, such as 1969's Marlowe, which cast James Garner as the title character, and 1978's The Big Sleep, with Robert Mitchum in the lead.

Perhaps more interesting than these straight updates of Chandler's work is the undeniable influence the author has had on two recent stoner mystery pastiches: The Big Lebowski by the Coen brothers and Thomas Pynchon's Inherent Vice (at least on the page; I haven't seen the flick yet, so I can't vouch for how much Chandler makes it to the screen). These later stories focus not just on the investigator but on the city of Los Angeles; the city's mutation over the years directly affects the style of the detective. The Big Lebowski, of course has two clashing mutations, with its hero seemingly stuck in the late '60s while the city around him has moved on to the early '90s.

It's hard to imagine the Coens or Pynchon getting the idea to do these kinds of holistic updates of Chandler's hardboiled tropes without the example of Robert Altman's The Long Goodbye from 1973. In an early-'00s interview with Altman that is included in the new Blu-ray edition of the film, the director says he and star Elliott Gould conceived the Marlowe of their film as a man out of time -- "Rip Van Marlowe" -- who doesn't quite understand his milieu but seems to take it all in stride. A tossed-off "It's okay with me" becomes the character's de facto catchphrase.

Riffing on a screenplay by veteran genre writer Leigh Brackett (she also contributed to the '46 Big Sleep), Altman manages to make The Long Goodbye wholly his own while never sacrificing the spirit of Chandler's storytelling. The film's funny and unforgettable opening establishes this alternately faithful and irreverent approach to the material. Woken at three in the morning by a hungry cat, Marlowe putters around his house, mumbling to his feline companion as he tries to improvise a late supper. He comes up with a mixture of cottage cheese and raw eggs that turns out not to be fit for man nor beast, and so he must go off to the all-night supermarket. When he returns with off-brand cat food, Marlowe goes to the trouble of pouring the new food into an old can to fool his cat. The cat is unconvinced and ditches out a makeshift cat door, never to be seen again. This sequence is nearly fifteen minutes long and would potentially seem like Altman self-consciously thumbing his nose at the material... except that this sequence sneakily provides the thematic keys to what we are about to see and even becomes a foretelling of the main character's emotional journey in miniature. Gould's Marlowe, despite his low-key wiseacre exterior, is a sentimental softie and loyal to a fault -- characteristics bound to bring him nothing but trouble, a runaway cat being just the tip of the iceberg.

In the same way that Marlowe goes out of his way for that ungrateful tabby, mere minutes later he obliges an old buddy, Terry Lennox (former Major League pitcher Jim Bouton), who requests a ride to Mexico, no questions asked. Despite the conspicuous scratches on Terry's face and the strange little satchel he carries with him, Marlowe performs his good deed for the day. Or so he thinks. Soon, the cops are putting the squeeze on Marlowe because it turns out that Terry's wife Sylvia was murdered and they are pretty sure both that Terry did it and that Marlowe knows something about it. Even more unsettling, wackjob racketeer Marty Augustine (played with sociopathic brilliance by On Golden Pond director Mark Rydell) is convinced that Marlowe knows something about the three-hundred-fifty grand that Terry ripped off from him before skipping the country. When Terry is reported dead by Mexican authorities, that manages to satisfy the cops but it saddles Marlowe with a new burden of clearing his dead pal's name while not getting croaked by Marty Augustine.

Enter Eileen Wade (Nina Van Pallandt), the wife of renowned author and drunk (sorry if that's redundant) Roger Wade (Sterling Hayden, gruff and brilliantly unhinged as ever). She hires Marlowe to find her missing husband, who turns up at the clinic of quack psychologist Dr. Verringer (a perfectly cast Henry Gibson). Even after this side case is solved, Marlowe chooses to hang around the Wades, partly because -- surprise, surprise -- they had connections to Terry and Sylvia Lennox, but also because of that darn loyalty of his. His behavior suggests that he wants to protect the Wades from themselves, if at all possible.

At its core, The Long Goodbye is a heck of a good detective story that is improved by its idiosyncratic execution. With its always-panning, always-zooming, always-tracking camera courtesy of Altman and cinematographer Vilmos Zsigmond, the film has a unique, loose look that has never been precisely replicated, not even by Altman, though he did employ similar filming strategies in later films like Gosford Park. That loose feeling carries over to the performances, which are completely natural (if somewhat heightened here and there) and never give the impression of actors reciting scripted dialogue (of course, considering Altman's reputation, this might just be because the actors strayed from whatever words had been on the page). On the other hand, one never gets the impression of watching a two-hour improvisational acting exercise either.

Though it still hasn't been widely canonized, it seems plainly obvious now that The Long Goodbye is one of Altman's very best films. It is indelible and influential, yet somehow inimitable. It shows that Altman didn't need a sprawling canvas with a giant ensemble cast to create a masterpiece.

The Video:
There have been some grumblings online about the fact that Kino Lorber has allotted The Long Goodbye's AVC-encoded 1080p 2.35:1 transfer a notably smaller bitrate than last year's UK Blu-ray release of the film. As someone without an all-region player, I have no way to make a personal comparison, although looking at the DVD Beaver comparison, it looks like we North Americans don't get an utterly horrendous step down in quality. Also, considering the look and style that Vilmos Zsigmond and Robert Altman chose for the film, which involved a variable amount of flashing on every shot, the film didn't have a crisp, vibrant appearance to begin with. Even so, this is a strong transfer, with pleasing color reproduction, no significant digital compression issues, and minimal film print damage.

The Audio:
The DTS-HD MA 2.0 audio is dominated by the typical Altmanesque mixture of overlapping dialogue. Altman also had Johnny Mercer and John Williams write a title song that appears throughout the film constantly, with different singers and in different styles. The opening melody even pops up as somebody's doorbell sound. Altman tried out a similar idea with a number of different renditions of "My Funny Valentine" in The Company, but the conceit somehow seems more suitable in the slightly off-kilter world of this film. Like the video, the soundtrack reflects Altman's idiosyncratic tastes, and so it is effective without being "impressive" in the typical sense. As for subtitle options, the disc offers English SDH.

Special Features:
These features are all carried over from MGM's 2002 DVD release.