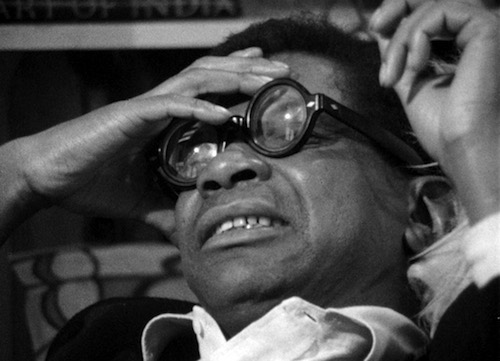 "It's nice that I'm doing what I want to do and someone is taking a picture of it. This is a picture that I can save forever."

"I can say whatever I gahdam please, but it's got to be righteous."

Shirley Clarke's 1967 documentary Portrait of Jason is a one-of-a-kind film. Restored and remastered by Milestone Films, it arrives on home video at the same time as Clarke's final film, Ornette: Made In America, as part of the company's concerted effort to pull this interesting filmmaker out of history's dustbin. While Ornette is fascinating but muddled, Portrait of Jason is an astonishing piece of work that couldn't be simpler.

Portrait of Jason documents one long night in the life of black, gay hustler Jason Holliday, as he drinks, smokes, and wanders around Clarke's living room, telling stories and performing bits of a nightclub act he claims he will get off the ground someday. Whether or not he has ever set foot on a stage, Jason is a performer of the highest order. He sings, does impressions, and is a smooth and sassy raconteur. But Clarke's intention here is only partly to capture this fascinating, sharp, and funny character as he presents himself to the world. She largely tries to discover the real person behind the performance. The opening shot tips this intention immediately as Jason addresses the camera, "My name is Jason Holliday," only to have Clarke prod him for his name a few times until he laughingly admits, "My name is Aaron Payne."

Prodded from off-camera to do comedy bits and tell funny stories by the three-person crew and Jason and Clarke's mutual acquaintance, Carl Lee, Jason dutifully plays his part. Squinting drunkenly through coke bottle glasses, Jason recounts his days as a houseboy with flair and bitter irony ("I'm a very nervous duster... Some things I broke on purpose, some things were accidents"), though he gets a bit more elliptical when it comes to his time as a prostitute ("If I'd have been a ranch, they'd have named me the Bar None"). He minces through an impression of Butterfly McQueen in Gone With The Wind. He offers his thoughts on gay marriage (he's not into it).

Jason keeps on laughing as he discusses being constantly beaten by his father, a gambler known as Brother Tough. He tells jokes about getting out of arrests by pretending to be turned on by the cops. Jason can't even stop from smiling when he talks about stealing all the furniture from the home of a man who let him stay in his house.

As the hour gets later, and the store of booze is presumably emptier, Jason gets more sedate and contemplative. Clarke and Lee continue to prod Jason, and now their requests are not for performances, but for answers. Jason is their friend, but he has conned them like anyone else. They manage to get him to break down, but it's ambiguous whether they actually break down his defenses. Though Portrait of Jason starts with its subject as the finger-popping, wise-cracking life of the party and ends with him a weeping, wrung-out drunken mess, Clarke's film is presented in a way that makes us question if we ever get to see the real man -- or if it is all just part of the performance that Jason is constantly putting on in his daily life.

Though we may never know these answers for certain, Portrait of Jason makes for an unforgettable viewing experience. It is a portrait not only of one man, or of one gay man, or of one black man, it is a resonant reflection of its times. 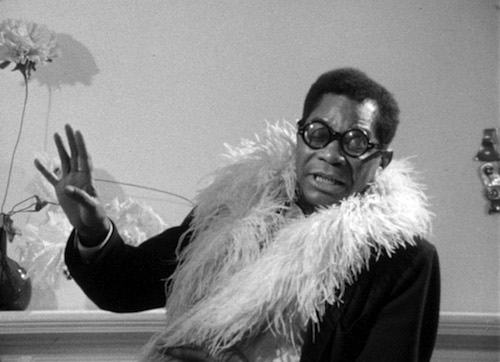 The Video:
The bonus features on the Blu-ray illustrate the painstaking process that Milestone underwent to restore the picture on this long-neglected gem. The resulting AVC-encoded 1080p 1.33:1 presentation still has a fair amount of dirt and scratches, but the contrast levels and the clarity are miles ahead of any of this film's previous home video incarnations. A tremendous amount of work went into this transfer, and it shows.

The Audio:
The LPCM mono audio is effective but not particularly impressive, and this is probably by design. The intentional rough edges of the visual style are echoed by the unpolished audio. Jason's monologues and performances are always loud and clear. Sometimes the comments and questions from off-camera are a little hard to make out, but fortunately the optional English SDH track was transcribed by someone with much sharper hearing than me.

(HD, 6:01) - Audio of Shirley Clarke confronting Jason about something awful that he did to her (never explicitly revealed) that caused her to ponder suicide. He responds by crying. It is prefaced by another audio clip of Clarke, explaining that she left this moment out of the film, because neither one of them read as believable onscreen even though the emotions might have been real. Since only the audio survived, a montage of random photos and footage is employed as accompaniment.

Final Thoughts:
Portrait of Jason is a long-lost gem. It is by turns wickedly funny, sadly touching, and uncomfortably raw. The packaging touts a quote from Ingmar Bergman calling it "The most extraordinary film I've seen in my life." He's not too far off the mark. There is no other movie -- fictional, factual, or a hybrid of the two -- quite like this. Highly Recommended. 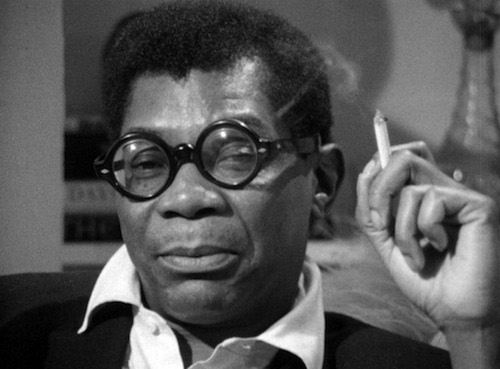