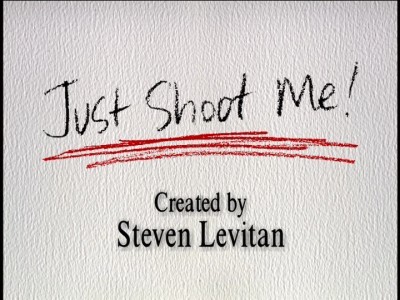 
The Story So Far...
NBC's sitcom set at a fashion magazine had a solid run of seven seasons, despite bouncing around the schedule and eventually leading to the creator becoming disenchanted with the network. The first three seasons have previously been released on DVD by Sony in 2004 (season 1 and 2) and 2009 (season 3.) DVDTalk has reviews of each set.

The Show
It's amazing to see how NBC went from the home of the traditional and mega-popular multi-camera sitcom to the home of the critically-acclaimed, but ratings-anemic single-camera sitcom, with CBS taking over the lowest-common-denominator genre to great effect (for their bottom line.) From the ‘80s to the ‘90s, NBC owned Thursday night with a variety of hit sitcoms, from The Cosby Show to Friends, Cheers to Seinfeld. But beyond the big names, there were other shows that filled out the night, and kept people from flipping the channel, including Wings, Mad About You and, for a few years, off-and-on, Just Shoot Me, the first show created by Steve Levitan, who would go on to establish a comedy dynasty at ABC with Modern Family. It was with Just Shoot Me that the seeds of that success were planted, working with his future Modern Family collaborator Danny Zuker.

The series' heroine is Maya (Laura San Giacomo), a struggling writer who needs a break after blowing up her career by sabotaging a TV anchorwoman she doesn't respect. Her only option is to turn to her father Jack (George Segal) for help. Jack publishes Blush, a fashion magazine, and he gives her a job as the articles editor, though she feels the magazine is a bit beneath her, a common theme for the series, as Maya's high-minded liberalism often gets her in trouble. At the magazine she works alongside the fashion editor (and former model) Nina (Wendie Malick), playboy photographer Elliott (Enrico Colantoni) and Jack's assistant Dennis (David Spade). The cast is wonderful, exhibiting great chemistry with everyone playing to their strengths, be it Malick's ability to play haughty yet manic, Spade's well-honed snark or Colantoni's everyguy appeal and classic timing. Of course, Segal is terrific as a somewhat sleazy, yet often befuddled father figure, and San Giacomo does well as the put-upon woman out to save the day, while managing to let her ideals be her own worst enemy. 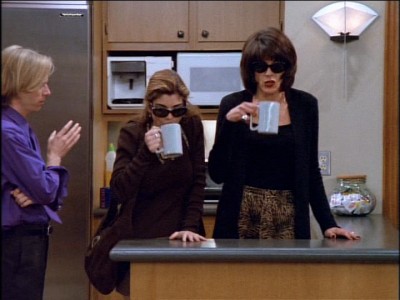 Most of the crew's misadventures are built around the world of the magazine and the world of fashion that it covers. The inherent ridiculousness of haute couture lets the show cut loose with that material. especially when it comes to Nina, who is the worst stereotype of the model lifestyle, though in a perfect way for comedy. Relationships are a frequent topic touched upon as well, including a potential romance between Maya and Elliott, but no one in the core crew is particularly good at them (though Jack is trying with his latest, and much younger, new wife.) The interplay between the members of the group can be a bit harsh, with lots of pranks pulled and taunting, particularly from Spade's character (natch), but the show does show softer sides as well.

Even so, it definitely exists in a time before today's more politically-correct atmosphere, with some slightly misogynistic behavior on the part of the guys and frequent gay jokes. People today might have particular trouble with Maya's character today, as her person of principal has an inability to maintain her scruples (especially if a guy is involved), which when played for laughs might rub some the wrong way. Interestingly, it certainly seems like the show's creators were self-aware, as there are episodes about sexual harassment (with Maya being cast as the unwitting aggressor) and gay acceptance (where Dennis' gruff firefighter dad [Brian Dennehy] embraces his boy's alleged homosexuality), both of which result in some of the funniest episodes in this set.

The ability to balance comedy and sentiment isn't the only place you'll find the roots of Levitan's later hit series. Though the show is definitely a multi-camera sitcom, with that awful laugh track and its accompanying regimented rhythm, there's an artistry to it as well, with unique camera angles often employed (getting closer to today's single-camera standard) and intriguing concepts, like one episode being built around the story of King Lear (though it's overly obvious, as Maya describes the play as the characters act in a similar manner) or an episode about a paintball game that metamorphosizes into a war story. Though the show could be very traditional in its structure, it also enjoyed being unconventional, like including Woody Allen in an episode about a person who lived his life as Woody Allen or making weird jokes about Japanese men in bikinis, or, as in "Lemon Wacky Hello," the team hopped up on some Chinese candy, making them hyper and paranoid. Anything that gets the group of edge

It's great fun to watch a series like this from a decent-enough distance, as you get to see actors who would go on to bigger and better things in early performances. Thus you get to enjoy CSI: Miami's Emily Proctor and House's Lisa Edelstein playing decidedly against type, Ali Larter (Heroes) showing some impressive physical comedy ability and Megan Mullally tackling a somewhat straight-laced part as a feminist (though there are hints of what she would show upon joining Will and Grace soon after.) Also, look for small parts by Tom Kenny (Mr. Show) and Michael McDonald (MADtv.) Up and comers weren't the only ones to guest star though, as the great Larry Miller sat in as a radio host (with Cathy Ladman playing a minor part in the same scene), SNL delivered a pair of scene-stealers in Cheri Oteri (as Maya's over-the-top secretary) and Dana Carvey (playing a flamboyant fashion designer) and TV veterans Jessica Walter (in the part of Jack's ex-wife, before her late-career breakout on Arrested Development) and Tom Poston (in a memorable turn as Jack's former partner) pumped up the actor rolls. 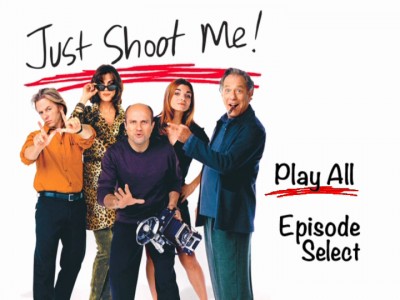 The DVDs
The 31 episodes of the first two seasons of Just Shoot Me are spread over three DVDs, which arrive in a single-width keepcase, with the discs stacked obnoxiously on a single, extra-tall hub. The discs have static, anamorphic widescreen menus, with options to play all the episodes or select shows (note that two episodes, "The Assistant" and "Sweet Charity," have had their titles switched in the menus.) There are no audio options or subtitles available, but closed captioning is included.

The Quality
The early episodes look worse off than those in the second season, but nothing in these full-frame transfers is remarkable. That said, the show doesn't look half-bad, considering that Mill Creek stuffed as many as 11 22-minute episodes on a disc. The color could be brighter in spots, the level of fine detail generally tops out at minimal and there's some obvious aliasing and video noise, but the result is an almost nostalgic feel for a series a few years shy of its 20th anniversary.

The Dolby Digital 2.0 tracks do the trick of presenting the show's clever dialogue and occasional music cues (which seem to surprisingly remain in place, like Rick James' "Superfreak".) Don't expect anything dynamic or any kind of depth from the simple, center-balanced presentation.

The Extras
When these seasons were first released on DVD in 2004, they included a featurette, four audio commentaries featuring Levitan and Zuker and a photo gallery. This time around, there's nothing extra to be had. 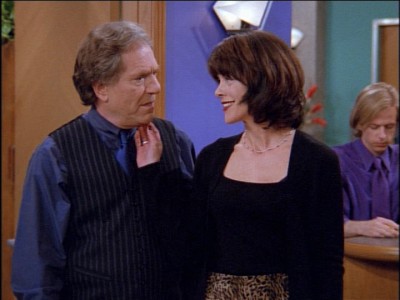 The Bottom Line
Though it features the hallmarks of the worn-out multi-camera sitcom, it's one of the funnier modern examples of the format, with a great cast and some very clever writing. These first two seasons show a series that was strong out of the gate, with some tremendously funny and unique episodes. The set looks and sounds fine, but lacks the extras available previously, however, it's offered at a rock-bottom price, so it's worth the price if you didn't own the originals.