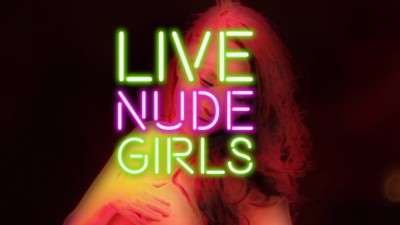 
The Movie
Sometimes one sees a movie star they respect and wonder about their choice of roles. One such person is Dave Foley. A member of The Kids in the Hall, he has a permanent spot in the comedy hall of fame, one cemented by his time on News Radio. However, he's got something of a low batting average, taking on an incredible number of roles, including some severe low points, hitting a nadir with his part in Uwe Boll's disastrous Postal. I've heard a rumor as to why this is (one I won't repeat), and if that's the case, his not being too choosy about his work is completely understandable, Dismaying, but understandable, and results in his participation in movies like Live Nude Girls, which are certainly beneath him.

Written and directed by the late Jay Leggett (who wrote Employee of the Month and Without a Paddle, and was apparently on In Living Color [though I have zero recollection of that]), Live Nude Girls stars the unlikely pairing of co-writer Mike Hatton (of the Bill Pullman/Mike Binder School of Everyman Leading Men) and musician Har Mar Superstar, as Shane and Tommy, a pair of ne'er-do-wells who take over a strip club Shane inherits when his father dies. The club has fallen on hard times, managed by a pill-popping relic (Foley) with the girls dancing to sparse crowds. To make matters worse, the main attraction, Boots (Tera Patrick), who was the previous owners' girlfriend, is furious that he gave the club to Shane.

The film throws a bunch of ‘80s plots in a blender, including the underdogs pulling their struggling business together (aided by the arrival of a new dancer and her unique talents) and the "we need to raise money in a short amount of time" cliche. On top of that, add in a bit of workplace romance, as Shane falls for Christina (Annemarie Pazmino), the bartender and only non-stripping woman in the club. Expectedly, things get a bit scattered, as we meet various denizens of the club, including a European musician who showers the girls with gifts and a multitude of useless employees. The film doesn't even try to keep the plot reasonable, as the third act has one character do something that makes zero sense for their own motivations, while another character, who's been in several scenes, returns and the rest of the cast acts like they have never seen him. It's just lazy and insulting. 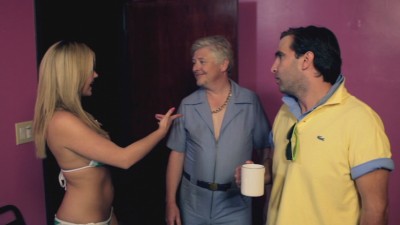 As much as it hurts to see Foley in a movie like this, he's the best thing about it, making his creepy strip-club manager funnier than the part should be, with his best bits sounding like they might be improv. Superstar, whose singing talent unfortunately goes unused, is perfectly cast otherwise as Shane's hedonistic best-friend, lending his unique look to add a Scottie from Boogie Nights angle. The pairing of Shaun Parker, as a police officer who frequents the club, and Matt Offerman, the philosophical bouncer, are also enjoyable, and if the sense of humor that went into their scenes has extended to the rest of the film this could have been quite enjoyable (and it possibly could have been if the outtakes in the credits are any proof.) Instead, it's a tepid comedy with a lot of nudity.

One major problem with this film is its inability to evoke the period its intended to, as it doesn't really feel like you're in the '80s. There are occasional nods to the era, like Tommy's giant shoulder-mounted camcorder or Shane's Miami Vice-inspired outfit and iconic car, but there are a few points where you say "oh yeah, this is supposed to be the '80s." That could be a good thing (it's obviously not relying on nostalgic references for jokes) but because that setting isn't fully realized, when those moments of recognition happen, they pull you out of the movie. Similarly, the concept of Tommy documenting the whole thing, complete with talking-head interviews, is abandoned half-way in. It was a bit forced (the intentionally low-fi video and graphics weren't exactly authentic) but what was the point of it being a relatively major element early on if it was going to be ditched? One place where the '80s concept is carried through is in the casting of the two male leads, as they are the kind of unorthodox stars you saw in the sex comedies that dominated HBO late-night in the ‘80s.

With a title like Live Nude Girls, a subject like a strip club and with a cast featuring porn stars Bree Olson, Patrick and Asa Akira (among others), this was bound to be a T&A flick, and for fans of the female form (especially the cartoonishly-endowed version) this is a goldmine, with copious nudity (though Olsen plays it almost coquettishly, staying covered up most of the time.) Of the three pros, Olsen offers the most as the sweetly naive Chloe, playing the part with a heightened air of bubbleheadedness, though Patrick is completely believable as a bitter long-time stripper (Akira has very little to do other than occasionally show her goodies.) None of the starlets are going to win any acting awards, but they do what they're supposed to do, which is show it off, including a Star Wars-themed Slave Leia performance (sans nudity) that seems like a copyright lawsuit waiting to happen. 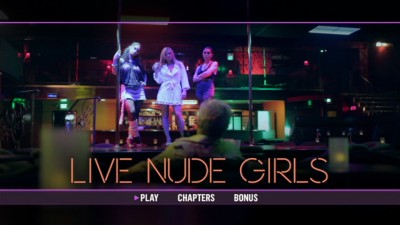 The Disc
Live Nude Girls arrives on one DVD, in a standard keepcase. The animated menus which offer a choice to watch the film, select scenes and check out the special features. There are no audio options and no subtitles.

The Quality
The anamorphic widescreen transfer here is a bit all over the place, sometimes looking beautiful (for what seems to be a film shot on video), while at other points coming off noisy. It's all a matter of lighting, as the darker scenes don't hold up well, and in a film set in a strip club, that's a problem. For the most part, color is good, and there's a decent amount of fine detail, while compression artifacts don't look to be an issue. Black levels could certainly be deeper though. One problem with the clarity of the image is that the supposedly VHS footage looks just completely fake (not that that's an issue, as the fake filter was forgotten later on anyway.)

The film's Dolby Digital 2.0 track is fine, handling the film's mix of dialogue and club music rather well, but don't expect any dynamic mixing in the experience. It's just straight down the middle, clean, distortion-free audio.

The Extras
The only extra is a 5:16 reel of deleted scenes, with a few outtakes sprinkled in. There are a few funny moments, including an additional appearance by Andy Dick (who is wedged into the film in a very unnecessary way) and some weird audition-like scenes with some sideshow performers that didn't make it into the final film. 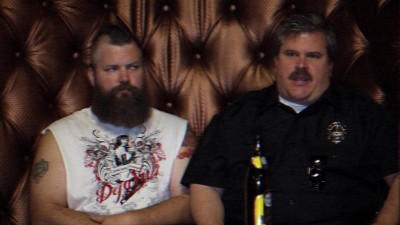