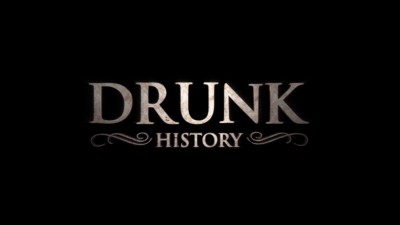 
The Show
Once again, the Internet has delivered unto us something wonderful. Starting life as a web series, Derek Waters and Jeremy Konner's Drunk History builds on a brilliantly simple concept: people who are drunk love to tell stories and they usually have trouble doing so. So, if you focus that idea, and have those drunks only tell historical stories, and then recreate those stories, using the actual inebriated ramblings as the dialogue, you get an ingenious little series. Of course it helps to have funny people involved, which Drunk History has in spades, resulting in two seasons of hilarity, even if the idea of listening to drunks talk about high-school level history sounds as entertaining as getting hit across the knees with a bat.

Waters acts as host of each episode, which follow a theme, which is normally geographic, like Washington, DC, or Boston or Baltimore, though it expands a bit in season two, to include things like music, first ladies and sports heroes. Waters, who drinks along his guests, is a bit like the drunk whisperer, guiding and watching over the people telling the stories, attempting to keep them on-track and hopefully preventing them from injuring themselves. He also meets local drunks to hear their thoguhts on the area (ot topic) and gets into some of the local color (not unlike Dave Attell's much-missed Insomniac, which Waters should think about re-establishing if Attell isn't up for it.) There are three narrators for each episode, who are blitzed to their own personal comfort level, normally in their own home (thus the frequent presence and interruptions of pets,) and they spill the information they have about a historical person or moment. 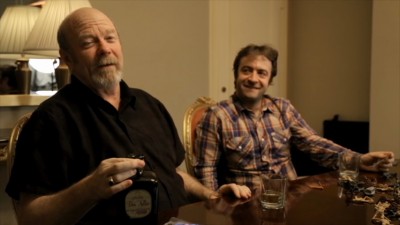 Personally, I don't drink, and I don't enjoy the company of drunks. Never have, never will. But here, we benefit from the distance from these narrators, who include a wide-range of entertaining people, from bigger names like Paget Brewster, Jenny Slate and David Wain, to an assortment of locals, to a mix of L.A. comedy folk, actors and writers like Allan McLeod, Mark Gagliardi and Suzi Barrett. Thus, when their stories are over, we can leave them prone on the floor, and not have to stick around for the inevitable tears and the awful ride home we'd have to provide (though we do [at least early on] get to enjoy the vomiting.) As such, it's tremendous fun to listen to Brewster babble on or Drunk History all-star Jen Kirkman attempt to form coherent thoughts, swinging and whiffing frequently. How much of their histories is actually correct is up for debate (apparently researchers fill in the narrators, but once the alcohol flows, they are on their own) but the struggles with speech and general giddiness makes for a good time.

The great part about these roles is it's really as loose as you're ever going to see these actors perform due to the nature of the show. They are acting out drunken dialogue in a silly idea of history. It's just fantastically funny, but it's also fascinating as well, with some of the best being the highly-interesting history of Hawaii, delivered by native Jonah Ray, the great Phil Hendrie and the wonderful Kurt Braunohler, and the surprisingly inspiring sports heroes discussed by Preston Flagg and Matt Jones. Despite the show being comedic, there's some actual reverence for the past, which makes the series that much more enjoyable. 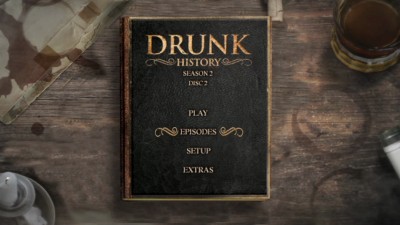 The DVDs
Packaged in a standard single-width keepcase with a dual-hubbed tray, Drunk History Seasons 1 and 2 arrives on three DVDs, and the case comes in a full foil-embossed cardboard "book" that mimics the book from the series' opening titles. The DVDs offer animated, anamorphic widescreen menus with options to play all the episodes, select shows, adjust the set-up and check out the extras. Audio options include Dolby Digital 5.1 and 2.0 tracks, while subtitles are available in English SDH.

The Quality
The anamorphic widescreen transfers look good, but not great, thanks to an image that's a tad soft, a bit lacking in fine detail (it is SD after all) and marred by some noticeable aliasing in places. On the other hand, color is appropriate and there aren't any real issues with compression artifacts. It's biggest sin is being a DVD in a high-def world.

The Dolby Digital 5.1 audio tracks aren't the most exciting you'll ever hear, but they do the job, with Waters and the narrators in the center channel, while the sides and rear channels pick up the music. Everything is clear, distortion-free and well-separated, and levels are appropriate, but don't expect anything of substance out of your low-end. This just isn't that show. It is worth noting though, that these tracks are uncensored, so all of the insane swearing is fully in place now.

The Extras
The first season goes light on the extras, with two entries. First there's 7:12 of outtakes from Chris Romano's history of his own father, Massachusetts' biggest arsonist, Johnny Cool. The story in itself is amazing, but Romano's barely-coherent, apologetic and eventually pantsless fiasco, rounded out in this footage, is a wonder to behold. This is where you appreciate Waters' role as a drunk wrangler. There's also a sober reveal with Kirkman (13:26), which is something like a commentary, as the performer sits with Waters and, in a straighter state of mind, watches and talks about her performance. It's a great idea, and there should be one for everyone involved (but there isn't.)

The second season offers up a pair of footage reels, which run a combined two hours, 16 minutes and 16 seconds. Found in this mess of drunkenness are deleted scenes, outtakes and a few more sober reveals, including one with Hendrie, which is expectedly great. Considering how the show breezes by (you'll watch them in marathons and be done before you know it,) some additional time with these lushes is a great bonus. If only the original Funny or Die shorts had been included though. 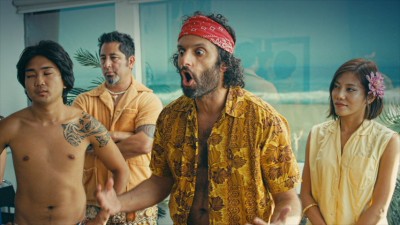 The Bottom Line
As someone who finds drunks to be simply annoying, I was surprised at how entertaining they are when they share history lessons, especially when accompanied by all-star re-enactments. This set is tremendous, now uncensored fun that blows by super quick, so the few hours of additional content is appreciated (though including the original shorts or more of the sober reveals would have been nice too.) A unique and engaging series, Drunk History is worth tipping a few back with.