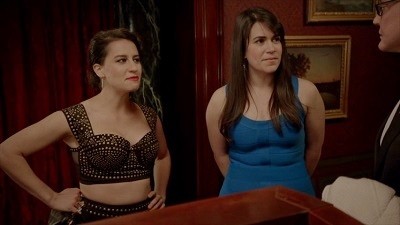 For many years, it didn't seem like original programming was much of a priority for Comedy Central. Aside from the occasional phenomenon, like "South Park", "Chappelle's Show", or "The Colbert Report", the "comedy" in their name was more about stand-up than narrative TV, with "Comedy Central Presents" being one of their major pop culture contributions (that, and playing Office Space ad nauseum until it was a mainstream success). Recently, though, the network has been upping its game with multiple creator-driven, low-budget sitcoms and sketch comedy shows: "Key & Peele", "Workaholics", "Nathan For You", and "Inside Amy Schumer", among others, have all become surprise hits. One of their latest efforts is "Broad City", a sitcom from Abbi Jacobson and Ilana Glazer (and executive producer Amy Poehler) about two best friends trying to get by in the big city.

As is the increasing norm for modern sitcoms, "Broad City" exists in a nearly cartoon version of reality where the characters' crazy adventures have no repercussions and the comedy is free to drift from extreme to extreme. The show is a cousin to "Workaholics" or "It's Always Sunny in Philadelphia", except Jacobson and Glazer actually manage to go even farther than their contemporaries in embracing the outrageous and low-brow. The pilot episode opens with a Skype call between Abbi and Ilana in which the latter eventually reveals she's in the middle of banging Lincoln (Hannibal Buress), her dentist sex friend (he'd like to be more than that, she's got commitment issues). Another episode set during a power outage centers around poop as a major plot point, and everything from extreme shellfish allergies to hemorrhoids are tackled before the season is over. All things considered, it may actually the crassest comedy on television, an idea I'm sure would delight its creators.

The character dynamic between Abbi and Ilana is that of the prototypical comedy duo, with Abbi as the more reserved and reluctant type (another pilot joke: she sets appointments for when she masturbates) and Ilana being the more adventurous and reckless one. What makes this particular partnership special is the delight they both take in diving into their roles, often literally. Glazer's specialties include dancing and twisting her face into grotesque ways, while Jacobson scores huge laughs with an expressive face that captures every subtle shade of Abbi's overwhelming neuroses. Whether the episode calls for Abbi to perform parkour for Trey (Paul W. Downs), her boss at the New Age gym where she works, or for Ilana to sneak out of an apartment Charlie's Angels-style with a shower cap duct-taped full of literal crap, they're more than game to make themselves look as ridiculous as possible. Sex and nudity are a common topic for the show as well, with the girls' bedrooms providing another setting for absurd physical comedy (not to mention a specific perspective -- nearly every sex scene shows the men pleasuring the women as opposed to the other way around).

The show would be funny enough on the strength of its creators alone, but it also has the benefit of an excellent supporting cast and a roster of guest stars that any show would envy. Abbi is tormented by Matt (John Gemberling), the slacker boyfriend of her nearly unseen roommate. Despite his girlfriend's absence, he's always at Abbi's place, eating her cheese and managing to misunderstand all of her rules in ways that inconveniences her. 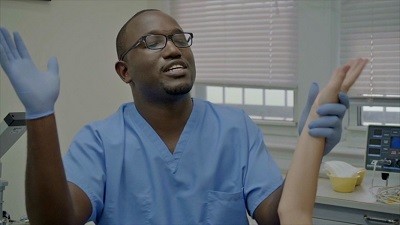 Ilana, meanwhile, has Jaime (Arturo Castro), a gay drug dealer of confusing ethnic descent who is always there to support his roomie. Trey is a fixture, a constant reminder of Abbi's less-than-cushy position at Soulstice, and Ilana has her own boss at a Groupon-like deal company, Derek (Chris Gethard), who is utterly ineffective at getting Ilana to actually do any work. Guest stars include Poehler, Rachel Dratch, Amy Sedaris, Janeane Garofalo, Seth Morris, all of whom fit right into the show's unusual tone. One stand-out episode revolves around Jason Mantzoukas and Matt Jones as a pair of creepy DJs who keep trying to take their separate one-night stands to another level, and Poehler actually directs the episode in which she and Morris appear, as a bickering couple working together at a classy restaurant. Still, the show's best supporting character (maybe best character period) is Hannibal Buress, who scores some of the biggest laughs with his super-chill, slightly-spacey read on everything.

Over the course of ten episodes, Jacobson and Glazer tighten up their ship. The first couple of episodes are a little too manic, with Ilana bordering on obnoxious, but later episodes soften the impact her scatterbrained ideas have on Abbi, which helps set the show back on track. The best episode of the season comes in the second half, when the girls go on a citywide adventure to try and relocate Abbi's missing cell phone using a tracker app. Abbi needs to find it so she can text a guy she met at a bar on the previous night, while Ilana waits for the other shoe to drop on the ripped, sexually talented bisexual dude (Luke Guldan) she met at the same bar. The show also experiments with format in interesting ways. "Destination Wedding" is a bizarre episode made up of the characters running to a ceremony for and featuring characters not appearing in any other episode, with only little bits of context for the audience to pull out of conversations. It's not a very funny episode (Buress again steals the whole show with two killer line readings), but it's fascinating just the same.

Before "Broad City" was picked up by Comedy Central, Jacobson and Glazer were making it themselves as a webseries, which was popular enough to attract the network's attention. It's wonderful to see that not only has the show successfully made the jump from online to prime time (or, you know, whenever it airs) with its sensibilities intact, but Comedy Central appears to have even adopted the format. 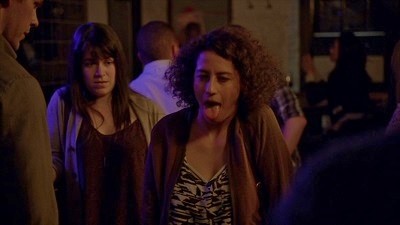 "The Idiotsitter", co-created by Charlotte Newhouse and Jillian Bell, was given a test run of six five-minute webisodes before receiving a greenlight for a full season on the network. "Broad City" is hilarious, rude, ridiculous and impressively diverse, a perfect distillation of everything Comedy Central is currently doing right.

The DVD
Broad City arrives in artwork styled after the show's opening credits, which are animated, featuring a slightly "rough-around-the-edges" kind of line work. It's got an eye-catching palette, with pink, yellow, and other Day Glo-shades of color are boldly splashed across the spine and back (although, curiously, not the front so much, which is comparatively subdued). The two-disc set arrives in an eco-friendly Amaray case, and there is a fold out map of Broad City (aka New York City) drawn by Abbi Jacobson.

The Video and Audio
Presented in 1.78:1 anamorphic widescreen and Dolby Digital 2.0 stereo, this is yet another modern television show getting slightly shafted on home video. The program is broadcast in HD, and presumably also in Dolby Digital 5.1, yet there is no Blu-ray version and the technical merits of the presentation, while certainly well in the "adequate" range, feel as if they're being cheated out of better treatment. Colors are stable, no artifacts or banding plague the presentation, and the dialogue comes through clean and clear, so there's not actually anything wrong with the way the show looks and sounds here, but, again, it seems as if a little more effort on either front could've led to a better DVD presentation and even a Blu-ray version. English captions for the deaf and hard of hearing are also included.

The Extras
A wide-ranging smattering of video extras are included on the set, in a somewhat disorganized fashion. I've streamlined the contents for clarity. On disc one, we have three chunks of alternative footage, "Lincoln Alts" (1:10), "Killian Casey Alts" (2:59), and "Janeane Garofalo Alts" (1:19). The first is basically a line-o-rama of Buress talking to an elderly lady from the pilot about his relationship with Abbi, the second dives more into the photo of Killian Casey's family that is not a Magic Eye of a rocket, and the third finds Garofalo screaming for an assistant that never arrives. "Uncut 'Pussy Weed' Cold Open" (3:35) and "Uncut 'Working Girls' Cold Open" (1:09) restore some footage to the intros for the respective episodes, but the former (more of Abbi and Bevers' extended argument about laundry and coupons) is better than the latter, which seems almost indistinguishable from the intro as aired. "Rachel Dratch Outtakes" (1:42) and "Garol Outtakes" aren't quite real outtakes, although the Garol one does have a glimpse of real laughter, which is not quite enough for me to stop wondering about the actor playing Garol. "Chicken Kicks" (0:46) is three takes of Abbi kicking a Costco rotisserie chicken (great aim), and "Abbi Sells Her Drawing for $17.50" (1:51), a split-screen negotiation over sandwiches and Naked juices. The disc wraps up with two videos under "Galleries", one of Mike Perry's completed opening title animations (1:32), and a second of test animations (2:03). 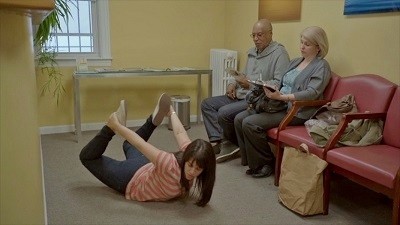 On disc 2, the same scattershot style recurs. "Improv Show Extras" (1:38) includes more excruciatingly awful improv, offensive both morally and comedically. "Janelle Caricature Scene" (0:24) is another short snippet of the delightfully obnoxious character played to perfection by Ruibo Qian. "Talent Show" (3:08) will tell you more than you ever wanted to know about the unsung verse to Bevers' bunk song. "Bed Montage" (2:32) features some highly entertaining physical comedy from Jacobson trying to wiggle out of a cramped bunk bed. "Dale Off the Phone" (2:06) shows off Tim Martin's lotion improvising skills. "Abbi Carrying Ilana" (1:08) is closer to an outtake than a deleted scene, with crew audible during the snippet (the version in the sow is chopped up and in ultra-slow motion). Finally, "Amy Poehler and Seth Morris" (1:40) finds the seasoned comedians exchanging some pointed barbs, clearly on the very edge of breaking. There is also a minimally altered "Uncut 'Apartment Hunters' Cold Open" (2:12), and plenty of love for Amy Sedaris on the disc, who gets her own set of "Amy Sedaris Alts" (2:37) as well as Amy Sedaris Car Outtakes" (7:48). Try not to get too tired of her line about Smart Cars, or the sound of her screaming for help, which are both included in excess.

The second disc also contains four video commentaries by Jacobson and Glazer on "Pussy Weed", "Apartment Hunters", and "The Last Supper", as well as one with writer / director Lucia Aniello and writer / actor Paul W. Downs on "Working Girls". The participants lounge in bean bag chairs in a window to the left while the episode plays in a window to the right. Sometimes the episodes expand to take up more of the screen (although they are always inside a frame for the commentary presentation), and the frame is filled with animated information -- names, Twitter handles, and illustrations of conversation topics. These aren't overwhelmingly informative and are extremely low-key, but they are occasionally funny, with some insight on the making of the show, and are also the only "making of" content on the set.

Conclusion
Those who jive with modern comedy, which embraces oddballs, cartoon logic, and R-rated subjects, "Broad City" is another hilarious success from Comedy Central. This first-season set could use with a little streamlining in the extras category, but is a great package for fans just the same. Highly recommended.