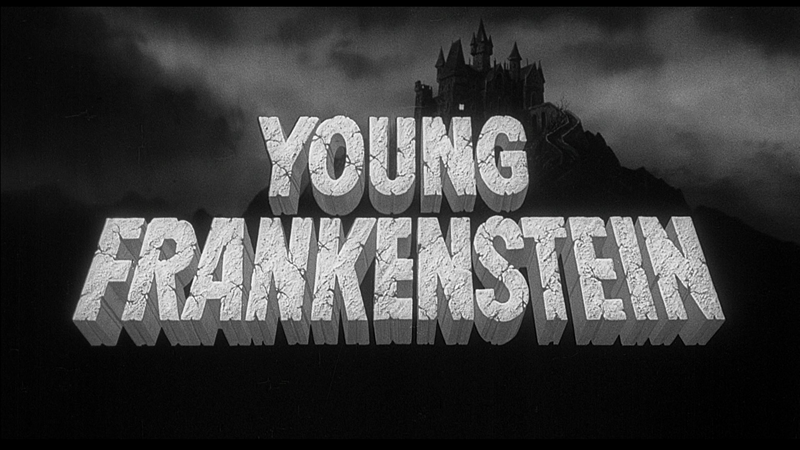 
The Movie
Considered by many to be the best work Brooks has ever done, Young Frankenstein is a brilliant parody for a number of reasons, but three stand out. One, Gene Wilder gives one of the best comedic performances ever recorded on film, the perfect part to showcase his ability to shift gears from quiet to manic. Two, the subject being parodied is obviously loved by the parodist, and that love enhances the laughs by treating them with respect. Finally, a serious attempt was made to recreate the look and feel of the original film, including being shot in black and white, using the props from James Whale's movie. As a result, it's a much closer parody that draws strength from being so "real."

An esteemed neurosurgeon, Dr. Frederick Frankenstein (Wilder) isn't very proud of his family name and the scientific legacy attached to it, going so far as to correct people who say his name the way we all would. So it's no surprise that he's not very excited to visit his grandfather's castle, which he recently inherited. But once he does, and discovers just what his grandpa was working on, he becomes obsessed with following through on the family research. 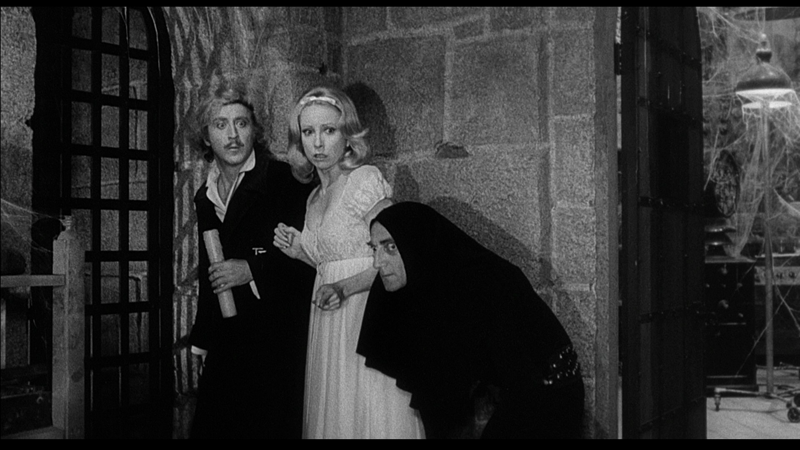 Assisted by the castle's faithful staff, including the beautiful assistant Inga (a hilariously naive Teri Garr) and the off-kilter hunchback Igor (the always-funny Marty Feldman), Frederick succeeds in creating the monster (Peter Boyle), and, as the story goes, all hell breaks loose. Of course, hell is tremendously funny in the hands of Mel Brooks, as the big brute's travails in the original film are lampooned wonderfully, and expanded upon to even include a musical number that parodies King Kong.

The jokes in this movie are some of the best in Brooks' career, and benefit from having an established storyline that lets the film focus more on being funny than telling the tale. The comedy that's drawn from Garr's voluptuous airhead, Feldman's mentally deficient Igor and the creepy housekeeper, Frau Blücher (Cloris Leachman), is filled with broad word play and sight gags, but it never feels forced, as it usually serves to advance the story. If it doesn't, it's there because it's purely funny, like Frederick's ridiculously misunderstood request for a sedative.

Just as she did in Blazing Saddles, Madeline Kahn is able to take a relatively small part that rides mainly on her looks, here playing Frankenstein's fiancee, and turn it into a comedic tour de force, creating amazing moment with Wilder and Feldman. The way she delivers even the smallest line, or even just a look, is hilarious, while her performance in the latter half of the film is a tour de force of understated comedy.

If Kahn's good though, Wilder is incredible. The way he moves between dignified doctor and raving madman is part of why this role is a work of genius. The birth of the monster unleashes him, allowing him to be completely nutty, while his interactions with Inga lets him play the leading man to great effect (a side of his career he didn't get to express as much as he should have.) There's not a moment in this movie where he doesn't entertain. 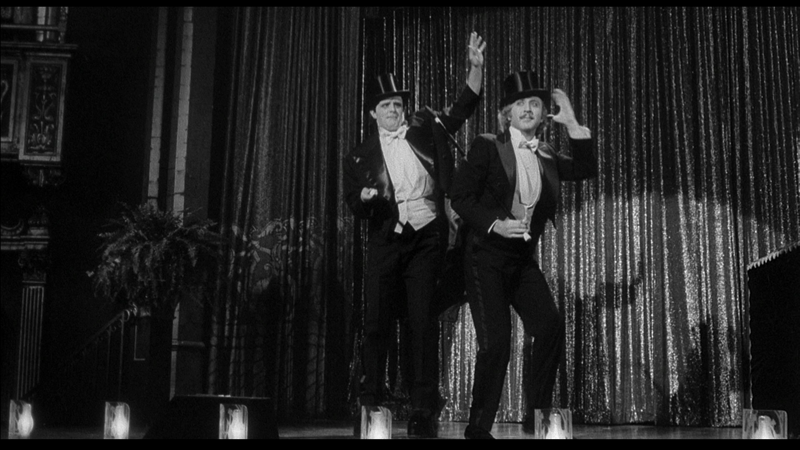 The Disc
Young Frankenstein returns on one Blu-ray, in a standard Blu-ray keepcase that's wrapped in a velcro-sealed slipcover that opens to show stills from the movie. The disc itself offers the same menu as the previous release, offering a choice to watch the film, select scenes, adjust the set-up and check out the special features. Audio options include English 5.1 DTS-HD Master Audio and Spanish 5.1 Dolby Digital tracks, while subtitles are available in English, English SDH and Spanish. If anything shows that this is the original disc, it's when you put it in your Blu-Ray player, if you have the ability to see the cover image (like on a Sony player) the cover is that of the Mel Brooks Blu-Ray collection.

The Quality
The 1.85:1, 1080p, AVC-encoded transfer here may be the same one offered in 2009, but that's not an issue, as the image is simply gorgeous, delivering the kind of crisp black-and-white you'd hope for on Blu-ray. From the moment the title comes on the screen, and you see the beautiful contrast and sharp detail, you know you're in for a great viewing experience. Black levels are wonderfully deep, and the level of film grain ensures that the feel of the original James Whale films are appropriately parodied, though there's some occasional dirt in spots. It's nothing that will drive you to distraction though, as you'll be so focused on how good Young Frankenstein looks.

While the mono tracks previously available on DVD were fine representations of the film's authenticity to the Whale films, the 5.1 DTS-HD Master Audio track on this disc offer a clarity and power that gives an appropriate presentation to the gorgeous Morris score, while not burying the sound effects or the crisp dialogue. Brooks' wordplay relies on understanding, and there are no concerns in that regard, as every element stands on its own. Thankfully, despite the multi-channel presentation being a modernization of the original sound, it doesn't sound artificial, having the effect of filling the room appropriately. You're not getting anything dynamic, but it is enveloping (as it should be to set the mood.)

The Extras
Nothing here that's any different from the previous 2008 Blu-Ray release, which is a massive disappointment. For Blu-Ray exclusive extras, we start with "Inside the Lab: Secret Formulas in the making of Young Frankenstein" This extended featurette can be viewed in picture-in-picture or as 11 separate parts (totaling 29:46) covering a variety of production details and comparisons to the original Frankenstein films via interviews with Brooks, Garr, Leachman and choreographer Alan Johnson, well as fans, collaborators and experts (several of whom were of a part of the then-current Broadway adaptation) including Thomas Lennon and Robert Ben Garant, composer Marc Shaiman, James Whale biographer James Curtis, historian Scott MacQueen, writer Thomas Meehan, director Susan Stroman, actors Shuler Hensley, Fred Applegate and Sutton Foster, Boris Karloff's daughter Sara and Sledge Hammer! creator Alan Spencer, who snuck onto the set as a teen and befriended Feldman. Brooks, as usual, is great fun, waxing poetically about Blu-ray, but don't bother watching it PIP, as it doesn't correlate to the film, and the experience doesn't make a lot of sense.

Many of these same participants return for "It's Alive! Creating a Monster Classic" (31:14), which focuses on the various elements that make the film such a longtime favorite. This one lets those who love the film, especially Lennon and Garant and Spencer, talk about why it works so well. It also is self-serving though, with a focus on the Broadway adaptation that was running at the time of the original Blu-ray's creation.

"Transylvanian Lullaby: The Music of John Morris" (10:29) puts the focus on Brooks' musical co-conspirator, and lets some of the previous talking heads chat about his contributions to the movie and Brooks' career, while letting Morris talk about his own work as well.

For those interested in more minutiae about the movie, "The Franken-Track: A Monstrous Conglomeration of Trivia" is available to run across the bottom of the screen during the film. Many of these facts are found elsewhere in the bonus interviews, but here you can learn them while you enjoy the movie. The font is a bit hard to read though, a problem with the entire menu system on this disc.

High-definition deleted scenes were added for Blu-ray, 17 in all, running 25:01. There's some repetition here, as you see some scenes done in multiple takes, but there are a few really interesting moments as well, especially when you get to hear Brooks directing the scenes.

And of course, there's the Blucher Button, which, if you've seen the movie, you have an idea of what it does.

The remainder of the extras are the same ones found on the previous DVD editions. First up is a feature-length audio commentary by Brooks, which follows in the style of his previous tracks. It's like watching a movie with your Grandpa Mel, as he tells you stories and talks about what's going on. It may not be incredibly insightful, but it's a good time. For your further listening pleasure, there's also an Isolated Score, so you can hear Morris' great music all on it's own. There are gaps in the film with no score though, so have your remote handy.

The 41:52 featurette "Making FrankenSense of Young Frankenstein" returns, made up of 10 parts, and includes older interviews with Gene Wilder and several members of the crew. The absence of Brooks and the rest of the cast is disappointing, but it's a pretty good look behind the scenes.

Seven deleted scenes (16:27) are presented individually and with a play-all option, and though they don't add much to the movie, they are interesting to see, including the unusual "Actors' Parade." A reel of outtakes (5:01) is more entertaining, especially the ones with Feldman and Kahn.

The most unusual extras from the original DVD are a pair of interviews, one with Feldman and one with Wilder and Leachman, conducted by a Mexican TV personality. There's nothing about the interviews that stands out very much, but the whole thing feels a bit off and Brooks-ian, and its inclusion here is appreciated.

The disc wraps up with a selection of five trailers that have that special Brooks touch, three TV commercials, and a gallery of production photos. These received a boost moving to Blu-Ray, with 19 galleries holding 565 photos, a treasure trove of archival goodness. 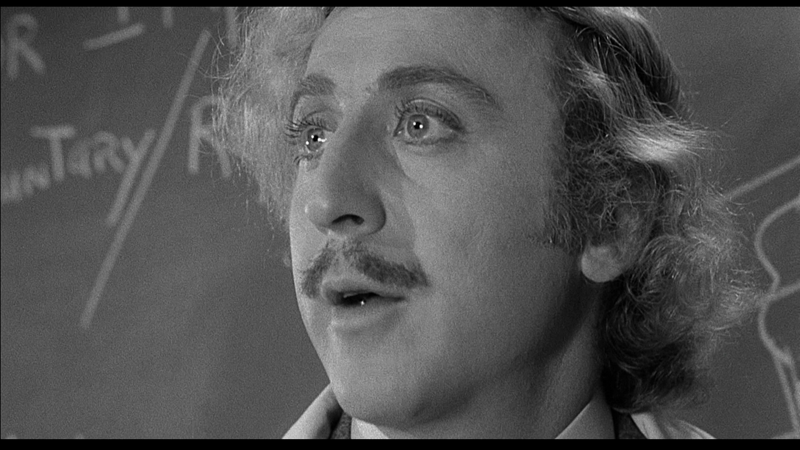 The Bottom Line
A Mel Brooks fan will never turn down a chance to enjoy Young Frankenstein, but we've had enough chances to hand over cash to Fox to do so, and this latest version is the most egregious cash grab yet, offering nothing of difference from the previous Blu-ray, despite the 40th-anniversary label. If you don't already own this film on Blu, the quality presentation and fine extras are well worth owning, but it's nothing new.