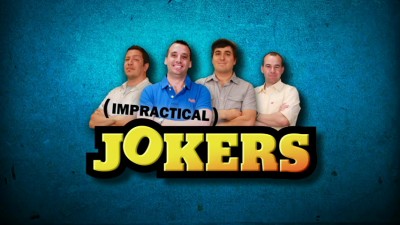 
The Show
Court TV was something of a phenomenon in its time, building an audience around a fascination with the legal system that gripped America in the ‘90s, thanks to in-court coverage of high-profile cases like the Menendez brothers and O.J. Simpsons cases. Eventually though, the niche fell through, and the channel became TruTV, with a schedule powered by low-budget reality television, before eventually being rebranded as truTV, a channel with no clear identity. As I write this, looking at the evening line-up, the channel will be airing five straight hours of something called South Beach Tow. The network's shows have no rhyme or reason, and their website offers no explanation as to what its all about. However, there is something of a theme, with a few series focused on pranks, including Impractical Jokers.

At first glance, this series seemed like nothing I would watch. Starring Joe, Sal, Murr and Q, a quartet of 30-something Staten Island mooks, the show follows as they challenge each other to various pranks involving unsuspecting people around them. The grating way everything sends them into waves of over-the-top laughter and the constant insults they lob at each other gives the impression that these are the guys in the back of the classroom from school all (physically) grown up. However, the true targets of these pranks are the four guys themselves, as they put themselves in the crosshairs, and though there's a definite mean streak in the show, the public is generally spared from it, and the results are often genuinely funny. 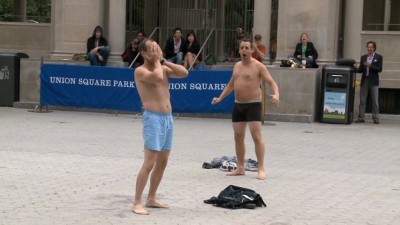 Each half-hour episode features three or four games between the four players. The interesting thing about these games is that they don't play to win, as no victor is declared, but rather losers are decided. Whoever loses the most games in an episode faces a final punishment, which takes a different form each time, including the loser having to teach sex education to his parents, having to dig through elephant dung for his phone, doing nude modeling or being treated like a human pinata. Unfortunately, the punishments, which serve as the climax of each episode, are normally not as entertaining as the games, likely because you know it's going to go poorly, robbing the segment of the tension that powers the rest of the show.

The competition is really the thing, as they rotate through several game ideas, played in a number of locations around New York. Most involve putting each of the players into interactions with people, and then forcing them to do what the other three tell him to do (via microphones and earpieces.) If they refuse, or fail to complete the task, they lose. It's great fun to see the guys try to mess each other up, and you can never be quite sure where the line is when they will tap out (though it usually comes when they are asked to insult someone or risk physical injury at the hands of a larger person.) There is some fearlessness though in them (Murr in particularly seems willing to do anything) and they do take on some challenges that they probably should have avoided. Their quick, silly wit is the most important part, but the reactions of the people caught in their trap are enjoyable as well.

Among the best of the games are any where they try to describe someone to a stranger based only on descriptions provided via cue cards written by the other players (the ideas can be downright surreal) or when they must avoid laughing while giving presentations to audiences with decks designed by the other players. Similarly enjoyable, but with a far higher level of unpredictability, are the "putpocket" games, where they have to put items, like pencils or balloons, onto people without their knowledge, or the movement bits, where they have to cross a space, but can only do so under certain conditions, like having to touch a stranger or lock eyes with them.

Most of the games are variations on these concepts, or involve trying to make people uncomfortable, but some are just strange one-offs, like seeing how many times they could dip french fries in other people's food without them knowing, or the hysterical potato game, where they try to put the most scoops of mashed potatoes onto unwilling restaurant-goers' plates. As I write these things, I realize they don't sound that funny, but I kept finding myself laughing, despite my comedy-nerd brain having major reservations (and concerns that some of the comedy read as homophobic, as several bits were predicated on the "ew" factor of physical closeness with another man.) If the laughs could overcome the issues, it's got to be rather funny. 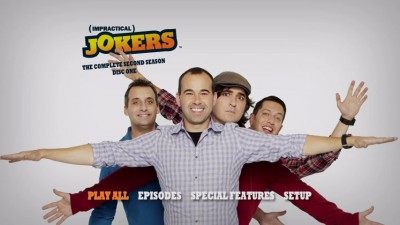 The DVDs
The second season of Impractical Jokers is spread over three DVDs, which are packed into a clear standard-width keepcase with a two-sided cover, an episode guide and a dual-hubbed tray. The case is held in a slipcase which repeats the cover art. The DVDs offer static, anamorphic widescreen menus with options to play all the episodes, select shows, adjust the set-up and check out the extras. There are no audio options, but subtitles are available in English SDH.

The Quality
The anamorphic widescreen transfers look solid, like any basic-cable hidden-camera show would be expected to look. Colors are appropriate, the level of detail is good and there are no notable concerns about compression artifacts. Part of it is the quality of the cameras used (these aren't lipstick security cameras, but big, barely-hidden mammajammas) but the presentation is sufficiently sharp and pleasing to watch.

The Dolby Digital 2.0 audio tracks are fine for material of this sort, which is recorded through a mix of sources and distances. There's some variation in how some scenes sound, but most voices are certainly legible, especially the guys watching during a game. There are no issues with distortion either.

The Extras
The big extra is a collection of four commentaries, with Joe and Murr paired on two and Sal and Q together on the others. These tracks are, in some ways, similar to the personalities seen in the interstitials between games, as they goof around and laugh while recounting the production of the shows. Some on-set stories and behind-the-scenes details are shared, including talk about traffic and their own concerns about how their laughing on the show would be perceived by viewers. These aren't exactly film school, but there are some interesting tidbits to be learned.

There are 18:33 of deleted scenes spread over the three discs, pulled from 12 of the episodes. These are mainly extensions of games seen in the show, but there are some looks at games that didn't make it into the show. None of it was cut mistakenly, but if you enjoy the show, these additional moments are appreciated.

"Inside Jokes" is a repeated episode, but this one includes on-screen trivia during the episodes, which are a bit more informative than what's provided in the commentaries. These tend to be good, but this one is a bit light on the entries, with some time between pop-ups.

Also included is a set of four "behind the scenes" clips, which run 9:57 in total. The name is a bit misleading, as these are mostly odds and ends, including some previously unseen punishments, a somewhat lecherous look at the women seen on the show and some footage of the people who work on the show. There's a definite online content feel to it all. 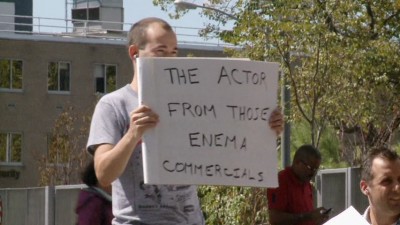 The Bottom Line
Expectations were low coming into this hidden-camera prank show from a little-known comedy troupe on a lightly-watched network, but despite any prejudices, the show's silly comedy drew more laughs than any similar shows of recent vintage. The DVDs look and sound fine, especially considering the origins, and there's a decent amount of extras for anyone into the show. The second season of Impractical Jokers offers some very universal comedy that will appeal to plenty of audiences, making it one to definitely check out.