Raro Video // Unrated // December 9, 2014
List Price: $29.95 [Buy now and save at Amazon]
Review by Stuart Galbraith IV | posted December 22, 2014 | E-mail the Author
Italian genre director Fernando Di Leo has, justly, recently been the recipient of much overdue attention for his ‘70s poliziotteschi crime films (Caliber 9, Shoot First, Die Later, etc.) but those expecting a similarly thrilling giallo-cum-horror movie in Slaughter Hotel (La bestia uccide a sangue freddo, or "The Beast Kills in Cold Blood," 1971), as I was, are in for a disappointment. The movie is a strange, notably illogical fusing of the emerging slasher horror film and the erotic thriller. It is, alas, light years away, quality-wise, from something like Mario Bava's seminal Twitch of the Death Nerve (aka Bay of Blood), released that same year. Co-written by Di Leo as well, it's both preposterous and boring, and very nearly pornographic in its obsession with naked flesh, particularly lingering, clinical close-ups of women's vaginas and buttocks.

That said, Raro Video's new HD transfer from the original 35mm negative is extremely good, though there's a peculiar fault with the default English audio I didn't figure out until the movie was almost over (see below). Some fine supplements also balance out what amounts to a forgettable viewing experience. 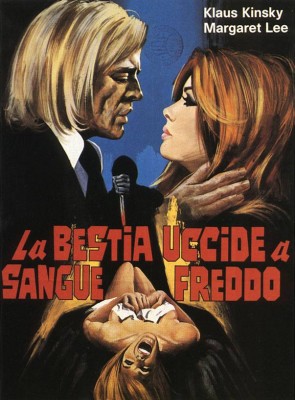 The movie's intentions are made apparent in the pre-titles opening scene, in which a masked maniac, wielding an axe, wanders the halls of a gothic mansion, converted into a sanitarium, while a nubile patient (the hospital might be called a Home for Voluptuous Woman; others need not apply), unaware of the madman, tosses and turns, naked, in her bed.

The kindly, humane head of the clinic, Dr. Francis Clay (Klaus Kinski…Klaus Kinski!?), is himself drawn into his own love affair with the nearly-cured Cheryl, but the madman stalking the grounds threatens their relationship, needless to add the reputation of this resort-like hospital for rich and beautiful women.

Slaughter Hotel is an illogical mess for myriad reasons, none more absurd than the fact that this hospital, supposedly treating suicidal and possibly homicidal mental patients, casually maintains an unlocked, unsecured medieval armory in its main hall, complete with swords, a crossbow, various knives, a flail and, conveniently enough, an iron maiden - all of which are put to good use by the killer.

The biggest single problem with the script is that, other than his victims, no one at the hospital is even aware there's a killer loose until the picture is almost over. During the last 15 minutes or so, there's a lively scramble of policemen, doctors, nurses, and patients, all chasing after or trying to avoid the maniac, who by this point is really cutting loose with that flail, upping the movie's body count considerably. But before that it's exceedingly boring watching the picture repeatedly cut back-and-forth between the killer slinking down dark corridors and little vignettes of various women taking bubble baths, seducing gardeners, or massaging one another.

The women are generally attractive, particularly gorgeous Rosalba Neri, but while the mere sight of bare flesh was pretty hot stuff in a movie theater back in the early ‘70s, today one can't help note the unflatteringly manner in which women were photographed for cheap Euro-Trash like this: stretch marks, appendectomy scars, cellulite, and pimples abound.

Wild-eyed Klaus Kinski - talk about lunatics running the asylum!* - is, as easily guessed, just a red herring, but the identity of the real murderer hardly matters, so unbelievable are his actions. For one thing, his (or her) murders are all extremely bloody but he never seems to get any of this blood on his clothes. He puts each blood-dripping weapon back in its place after each murder, but no blood drips between the crime scene and the armory, nor does anyone notice the blood-soaked weapons (or blood-draining iron maiden) until the end.

When the staff finally realize there's a killer on the loose, one doctor irresponsibly suggests "offer[ing one of the patients] as bait!" Amazingly, the police, no more professional than the psychiatrists, immediately go along with this reckless plan.

Di Leo, unsurprisingly, exhibits zero interest in the material, except for those close-ups of women's vaginas. Some footage is attractively photographed, but Di Leo's attempts to generate suspense with flash cuts and oddball camera angles add up to very little. In the default English-dubbed version, several mostly dream sequences alternate between Silvano Spadaccino's loud, obnoxious score and total silence. I spent most of the movie thinking this was done purely for effect, but near the end of the film, in the wake of the killing that finally alerts everyone to the killer's presence, it became clear this was not a decision by Di Leo at all. Rather, all of this silent footage apparently exists without English audio. Other labels, such as Blue Underground, fill in such gaps by temporarily switching to non-English audio accompanied by English subtitles. That wasn't done here, creating only confusion.

Apparently filmed in 2.35:1 Techniscope, Slaughter Hotel at least looks great. The colors are rich and the detail impressive, the only real fault inherent in the original camera negative: some flutter in the film gate on many exterior shots. The DTS-HD Master Audio is also very good, though there are some bumps on the English-dubbed track (see above) and some of the nudity plays like it was awkwardly reinstated from a shorter edition, based on the audio. The English subtitles for the Italian track are excellent.

Supplements include "Lady Frankenstein's Memoirs," a lengthy, enjoyable interview with actress Rosalba Neri, who still looks good even in her seventies; "Asylum of Fear," a shorter featurette about the film; a trailer, and two minutes-worth of deleted scenes.

Pretty bad, though genre fans might want to have a look and at least enjoy the good transfer and extra features, Slaughter Hotel, otherwise, is a Rent It.

* Beyond his multi-masterpiece collaborations with Werner Herzog, my favorite Klaus Kinski performance is in the Euro-war film Salt in the Wound (1970) which casts the crazed actor as an all-American G.I.