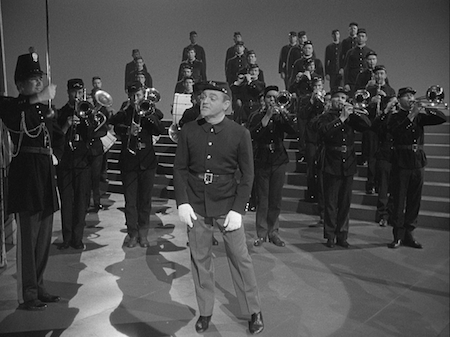 What makes an old film a "classic," worthy to stand the test of time? Is it the universality of its themes or the timelessness of its situations?

Why then is 1942's Yankee Doodle Dandy a continually heralded classic when its portrait of unwavering American patriotism seems on first blush so narrowly tied to the time when it was made (directly after the bombing of Pearl Harbor)? Why does it continue to ensnare audiences who have spent the past half-century or so being disillusioned by the American government and political system? The message, the style, the songs -- they're all so dreadfully old-fashioned and naive! Right!?

Forgive me for playing devil's advocate just then, because in all honesty I love Yankee Doodle Dandy without reservation. I have listened to arguments from friends who can't stand its simplistic ideology and its surplus of literal flag-waving, and I don't disagree with them. But, even taking all that social-critique stuff into account, I still think Yankee Doodle Dandy is one of the most entertaining films ever made.

James Cagney consistently lights up the screen for two-plus hours in his Oscar-winning role as real-life Broadway legend George M. Cohan. As with pretty much every Hollywood biopic, Yankee Doodle Dandy plays it fast and loose with facts and dates as it tracks its hero's rise to dominance over Broadway, but it manages to distill Cohan's life into a number of engrossing and often funny episodes. Cohan was born into a showbiz family and spent most of his life on the stage, so Cagney is given the chance to play him as a teenager all the way through to old age. Cagney's version of Cohan is a brash, self-centered braggart, the kind of go-getter most folks only dream they could ever be. He is full of himself, but one shouldn't mistake Cohan for a flawed protagonist; Cagney's characterization relies on the fact that the man has enough talent to back up that oversized ego, making him endearingly eccentric.

The other thing that makes Cohan's character endearing is that, while he may be wildly ambitious, he is also loyal to a fault. Cohan steals a prime investor from fellow playwright Sam Harris (Richard Whorf), but then he makes Harris his business partner and goes on to produce hit plays with him for the next fifteen years. Cohan leaves his family's long-running act to strike out on his own, selling scripts and songs, but when he actually manages to get a show on Broadway, he immediately sends for his family to costar.

Walter Huston is a scene stealer as the Cohan patriarch who is both immensely proud and more than a little jealous of his son's accomplishments, while Cagney's own sister Jeanne and Rosemary DeCamp nicely fill out the family act. Meanwhile, 17-year-old Joan Leslie more than ably plays Cohan's loving and supportive wife Mary from teenage to old age.

The musical numbers, based around Cohan's hits like "You're a Grand Old Flag," "Over There," and "The Yankee Doodle Boy," are all presented with elaborate staging and choreography that reportedly matches and no doubt occasionally surpasses the scope of the original ambitious theatrical productions. Cagney, whose gangster film background might have made him seem out of place as a Broadway showman proves the skeptics wrong again and again. He might not have the sweetest singing voice in Hollywood but with his confident swagger and a uniquely stiff-legged dancing style meant to ape Cohan's original steps, Cagney holds the spotlight with little effort.

When folks aren't singing, the script offers plenty of charming diversions. (Though Robert Buckner and Edmund Joseph's names appear onscreen, reportedly the film's pervasive rapid-fire banter can be attributed to uncredited rewrites from Julius J. and Philip G. Epstein [who also worked on director Michael Curtiz's Casablanca].) At one point, Cohan gleefully exchanges barbs with his Broadway competition Eddie Foy, portrayed with cartoonish panache by the performer's son, Eddie Foy, Jr. Another amusing sequence deals with Cohan's contrition after taking a song he wrote for Mary to sing and giving it to a bigger star instead; though he doesn't come right out and admit what he's done, the giant bouquet of flowers and fifteen-pound box of chocolates are a dead giveaway.

Curtiz's direction is flawless. He guides the story through moments of silliness and sadness, through broad comedy and broader sentimentality, maintaining a brisk tempo while keeping the film from losing its way tonally.

Sure, Yankee Doodle Dandy fails to show us George M. Cohan as he actually was, just as it fails to represent America in cold, factual terms. But the vision of George M. Cohan as a man driven to entertain audiences at all costs rings true and speaks to viewers, maybe in the same way that the vision of America as a glorious symbol of freedom spoke to immigrants like Cohan's family, Cagney's family, Michael Curtiz, and the Warner brothers. All that flag-waving may be out of fashion, but it still reads as genuine conviction -- and maybe it's that conviction that makes Yankee Doodle Dandy so undeniably appealing all these years later. 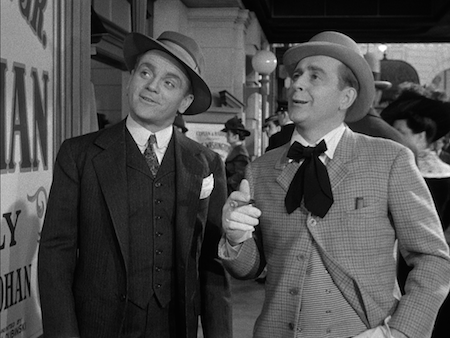 The Video:
The fact that Yankee Doodle Dandy arrives on Blu-ray as part of Warners' Archive Collection could potentially be read as a sign that the greatest care was not taken to create the HD video master for the film, but that supposition is immediately proved incorrect by a brief glimpse at any frame from the film. Clearly the AVC-encoded 1080p 1.37:1 transfer has been carefully handled to create an impeccable reproduction of James Wong Howe's original cinematography. The details are perfectly crisp, the range of contrast is nuanced and attractive, and the film's grain structure is preserved. I saw no digital compression issues to detract from the presentation.

The Audio:
The DTS-HD MA 2.0 mono audio track boasts impressive clarity and fidelity. There was a brief pop or two that I picked up on over the course of the feature, but those were the only defects I happened to notice. Subtitles-wise, the disc offers English SDH.

Special Features:
All of the bonus features included here previously appeared on the 2003 2-DVD edition of Yankee Doodle Dandy, although all of those original bonuses have not made the leap to the new format. The stills galleries, the Yankee Doodle Bugs cartoon, the Top of the World doc about James Cagney, and the Joel Grey Easter Egg are all M.I.A. I leave it up to you to decide how important those were to your overall home video experience.


Final Thoughts:
Even though every last little featurette has not made its way over from the old 2-disc DVD edition, this is still an outstanding upgrade. The A/V presentation is definitely amongst the finest I've seen for a film of this age. The film itself is an American classic. There can be no other designation for Yankee Doodle Dandy than DVD Talk Collector Series. 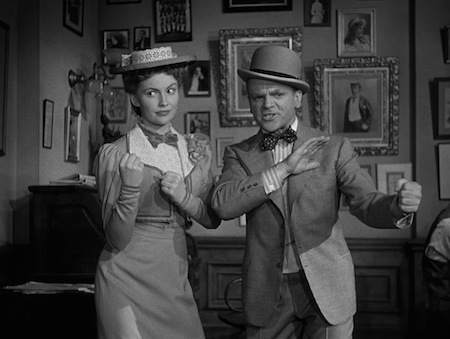