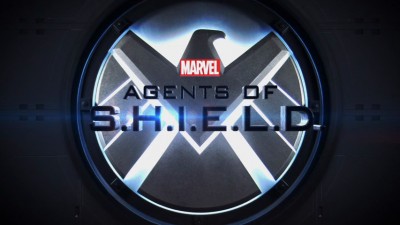 
The Show
When Marvel's cinematic universe first took off, I thought the next move was to make the leap to television, and thought the perfect vehicle for that was Damage Control, the construction and demolition team that rebuilds areas destroyed when the superpowered citizens of Marvel's world get down to battle. A comedic concept tangentially connected to all the superheroics, it seemed like the perfect way to give fans more of the universe they enjoyed on a more regular basis, while keeping costs low and the humor high, by focusing on regular people who have run-ins with heroes and villains.

Well, that's not what happened. Instead, Marvel turned to Avengers director Joss Whedon's brother Jed and his wife/collaborator Maurissa Tancharoen, who took the popular Marvel Cinematic Universe Phase One character Phil Coulson (Clark Gregg), the man who helped gather the heroes who became the Avengers, and made him the star of his own series, focused on his team at S.H.I.E.L.D., the international peacekeeping organization run by Nick Fury (Samuel L. Jackson.) The hour-long drama would build off of the well-known heroics, and tell connected tales of espionage, as Coulson and his squad respond to threats to humanity around the world.

Now, in case you haven't seen The Avengers, you should know that in a climactic battle, Coulson was very badly injured, which became a rallying point for the heroes. Well, he's back, but how he made it back is a large part of the series' foundation, which is revealed in piecemeal over the course of the first season. Coulson's search for the truth is intertwined with the arrival of the newest member of his team, a hacker known as Skye (Chloe Bennett), who has plenty of secrets of her own, in part due to her past as a rogue "hacktivist." Trust is a massive theme in the series, as no one is sure about anyone else (with good reason in most cases) but they have to rely on each other if they are going to complete their missions, which remind one of Fringe in a big way, as the team investigates strange phenomena in order to keep humanity safe. 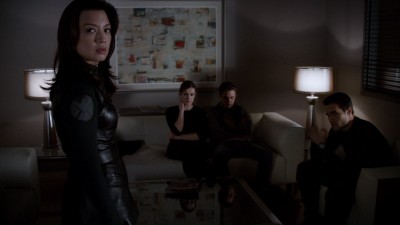 As much as Fringe is rightfully missed (at least in terms of the first few seasons), chasing down the freak of the week before finding out a sliver more of the main mysteries was not what people wanted from a show so seemingly tied into Marvel's huge superhero movies. What they wanted was a weekly dose of the Avengers and they didn't get it. For comic geeks, there was certainly some groundwork being laid out, with references and easter eggs throughout, but for those who only knew of the movies, this wasn't enough.

Enter Lorelei. Though certainly not a big-name Marvel character (her sister The Enchantress has a much higher profile) and not the first recognizable super-powered character on the show (that would be the cybernetic assassin Deathlok, whose origin is revealed over the course of the season), Lorelei tips the scales with her appearance because she, as an Asgardian, creates a direct link to the world of Thor, and also because she's followed to Earth by Lady Sif (Jaimie Alexander), the Asgardian warrior from the two Thor films. Finally, fans exclaimed, there's some honest to goodness superhero action to be enjoyed, and that was followed by direct ties into the new Captain America movie, picking up the plot from the theaters and bringing its effects home. This was the crossover dream that comics mastered decades ago, and now Marvel was making happen between movies and TV (and you didn't really even need to see both sides to enjoy them separately.)

After offering this cookie to the fans, the series shifted back to the spy game though, where it would stay for the rest of the season, introducing Bill Paxton and Saffron Burrows in major roles) as Coulson's organization crumbled around him and the team shifted from saving the world to saving each other. Coulson's team, which, aside from Skye, includes Ward (Brett Dalton), a perfect soldier; badass pilot May (Ming-Na Wen) and science specialists Fitz (Iain De Caestecker) and Simmons (Elizabeth Henstridge), comes together quickly as a unit on the series, establishing their personalities right off the bat, with Skye serving as the show's young star, showing the old guard how a new generation does the job (though still requiring saving and offering a hearty cry every now and then) and Fitz and Simmons serving as the audience's tech-loving stand-ins, the most down-to-earth parts of a fantastical realm. May though, with her economy of words and excess of butt-kicking skill, is the "Wolverine" of the show, and her relationship with Coulson serves as a backbone for the series. Naturally, Gregg's performance is integral to the show, and he continues to shine in the role of Coulson, giving us a smartass secret agent for the ages.

While the show is a serial and does well at telling action-adventure arcs of mystery and intrigue, building the mythology and establishing a larger storyline, it could do one-offs as well, including two of the season's best episodes, "FZZT" which ties into The Avengers while telling a standalone story that put a spotlight on Fitz and Simmons, and "T.R.A.C.K.S.", which puts the team on a train and tries out some interesting storytelling structure. The show also has its humorous side, taking its tone from the Marvel films, which blend grits with grins (and though Patton Oswalt gets a featured role in one episode, for once, he's not responsible for the laughs.) For the most part, this mix works well, as it helps illustrate the growing camaraderie between the teammates and keeps the tone light, but it can get out of hand very quickly. The final episode, where much of what's been revealed over the course of the previous 21 episodes comes to a head, the lightheartedness (thanks to an appearance by a famous friend of the team) goes over the top, causing the season climax to verge on camp. The show didn't have to be dark and dismal, but there's a middle ground, and the ending did not land there. The season also heaped on the double-crossing, like they bought it in bulk at CostCo. As with any story that features a shapeshifter, once you introduce betrayal as a common item (and in Agents of S.H.I.E.L.D. everyone does something to lose the others trust) you are sliding down a slippery slope wearing teflon shoes. The audience has to be able to trust a decent amount of characters most of the time, otherwise nothing you see can be accepted at face value, and storytelling is absorbed by a guessing game. 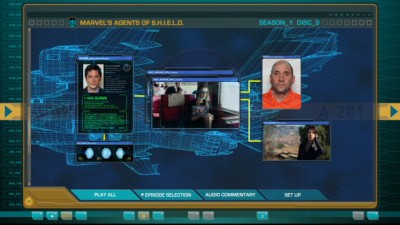 The DVDs
The 22 episodes of the first season of Agents of S.H.I.E.L.D. are spread over five DVDs, which likely arrive in some sort of retail packaging (unlike the discs we received.) The discs have nice blueprint-themed animated, anamorphic widescreen menus, with options to play all the episodes, select shows, check out extras and adjust the set-up. There are no audio options, but subtitles are available in English SDH, French, Spanish, Portuguese, Thai and Chinese.

The Quality
Agents of S.H.I.E.L.D. is often dark and cool, and these anamorphic widescreen transfers handle that challenge well, delivering clean, well-detailed standard-definition images that show no signs of digital distractions and excellent coor. The clarity of the image makes the special effects shots look less real than hoped for, but the over quality is quite good for a non-HD presentation.

The Dolby Digital 5.1 tracks are impressive for a TV show, offering plenty of bombast in the surrounds and low-end, to go along with the clean dialogue. Considering the many action scenes, this isn't too surprising, but it's handled quite well, with a level of depth that's not common to network TV, whether it's the ever-present atmospherics or the dynamic mixing that keeps the action filling the room.

The Extras
Before we get started, it should be said that if you haven't watched the show, you should wait to watch the extras, as they are loaded with spoilers. Up first are some audio commentaries, featuring a mix of cast and writers. It's interesting to see how very different the tracks feel, with the episode with Wen and Richards feeling like a party, Gregg and Bennett essentially narrating the episode, and FitzSimmons offering a quieter chat. All three are worth a listen.

Originally airing on ABC, "Marvel Studios: Assembling a Universe" (43:02) is a tremendous overview of the cinematic universe and how it all came together, through interviews with most of the films' big stars and many of the crew responsible for making them (as well as a few random famous fans, like Tom Morello, George R.R. Martin, Chris Hardwick and Bobby Moynihan.) Even if you know all the details, the special is very well-made and it's great to hear from those involved, though, in the end, it's basically a promo for the TV show and the then-upcoming Captain America: The Winter Soldier and Guardians of the Galaxy, as well as 2015's The Avengers: Age of Ultron (with a glimpse at an unmentioned Ant Man movie.)

"Journey into S.D.C.C." (13:13) takes a look at the first Agents of S.H.I.E.L.D. panel at the San Diego ComicCon, but instead of focusing on what happened on the stage, the featurette looks at the cast members' experience, starting with the troubled bus trip to the convention center. It's a nice take on what's become a somewhat standard extra.

"Field Reports" offers up five short segments (running 17:42 in total) that look at location shooting and big, important scenes, including a massive explosion on a bridge and a rooftop leap on the part of one of the agents. Seen in these pieces, the cast seems to be having fun on the set, which is confirmed by "Bloopers of S.H.I.E.L.D." (6:31) This gag reel is a great deal of fun, as is normally the case when you contrast a serious show with silliness. Between Wen and Gregg, every screw-up becomes hilarious, while the reel includes the gag standards, like random dancing, mugging and goofing off, as well as several funny Oswalt and Paxton mess-ups.

Two VFX Progressions clips follow, one showing Coulson's flying car Lola (1:09), while the other looks at a tense skydiving scene (1:46), showing, through a composite of production stages, how these special effects shots were created. Then the extras wrap up with eight deleted scenes, running 6:56 (with a play-all option.) There's nothing earth-shattering here, but there are two scenes FitzSimmons ‘shippers will probably want to watch, as the two agents talk about each other to other character. 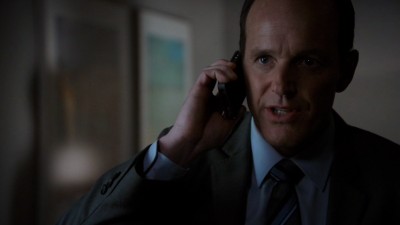 The Bottom Line
Agents of S.H.I.E.L.D. isn't what many people wanted from a TV spin-off from the mega-successful Avengers film franchise, but it told an entertaining special-mission story with an appealing team of characters, flavored with Marvel-brand superheroics (at least when it wasn't bogged down in double- and triple-crossing.) This set delivers the show in fine quality and offers a nice spread of extras for fans to enjoy. There's a lot of twisting in the plot, which makes repeat viewings a bit less effective, but at its peak, the best episodes are solidly entertaining.