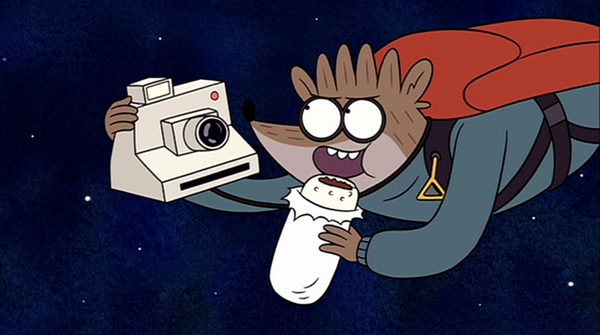 Cartoon Network has unleashed their sixth "pack" of random 11-minute episodes from the hit animated comedy Regular Show, this time focused on the self-centered raccoon character, Rigby. Of course, since Rigby is essentially the co-lead of the show, finding 16 episodes in which he is featured prominently is not very tough.

If you don't know the show, here's a recap of the general premise. Two twenty-something slackers, bluejay Mordecai (voiced by show creator J.G. Quintel) and raccoon Rigby (voiced by William Salyers) work in a park and live with their eccentric co-workers. These include a yeti who skips, named Skips (voiced by Mark Hamill), a giant lollipop with an affection for outdated technology named Pops (voiced by Sam Marin), an overweight, Frankenstein-looking dude named Muscle Man (also Marin), and a ghost with a hand on his head called Hi-Five Ghost (Quintel). Their boss is a perpetually ticked-off gumball dispenser named Benson (Marin). Shaped by a love of '80s pop-culture, video games, and ridiculous sci-fi, typical episodes begin with a fairly normal, almost sitcom-y premise (e.g., Rigby needs to do one pull up to pass a physical fitness test and keep his job) that inevitably escalates to fantastic extremes (Rigby buys a machine that tones his muscles for him and does it so well that his giant arms are too heavy to carry). It never reaches the heights of complete WTF!? randomness of something like Adult Swim's Aqua Teen Hunger Force, but the reality of the Regular Show universe is pleasingly elastic.

Though most of the cartoons in this set revolve around the notion that Rigby's tendency toward stubbornness and laziness will inevitably lead to trouble, the show's writers find plenty of inventive ways to exploit this same theme. In "Fortune Cookie," Rigby swaps fortunes with Benson because Benson has been having good luck, which leads to a series of devastating misfortunes for Benson, climaxing (as so many of these stories do) with the near-decimation of the entire park. In "Wall Buddy," Rigby refuses to clean up his mess, going so far as to buy voice-activated walls to separate himself and put the offending piles out of his sight. In "Rigby's Body," Rigby forces himself to eat so much junk food that his body revolts and separates itself from his consciousness (which resembles a green puddle of gelatin).

All of the cartoons aren't exactly on theme. "Return of Mordecai and the Rigbys" has the fellas reforming their band, so they can win a contest for a new air conditioner (their song is appropriately ice-themed). "A Bunch of Full Grown Geese" has Mordecai and Rigby stuck with the unfortunate job of getting some very mean geese out of the park, with the help of some baby ducks. A trio of cartoons -- "The Heart of a Stuntman" (with guest voice Bobcat Goldthwait), "Fool Me Twice," and "Sandwich of Death" -- send the Regular Show crew through a series of elaborate obstacles to obtain (respectively) a stuntman license for a kid's birthday party, a mystery prize on a Japanese game show, and a sandwich that can keep Benson from dying.

Only one episode in this set really disappoints, and that's the one-note "Trash Boat," in which Rigby decides to change his name to the title phrase on a whim and is then hounded over and over by his terrible decision. The ending of that episode, however, might be one of the funniest on the disc, so none of the included episodes are a total wash. 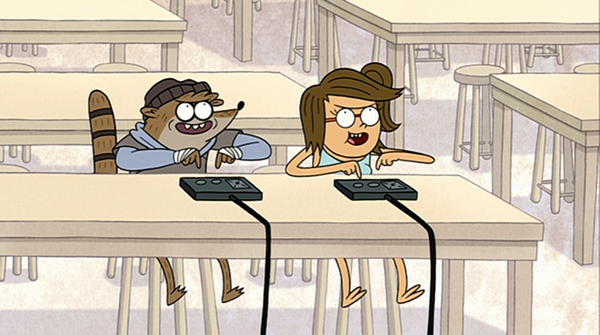 As fans are already well aware, these Regular Show "packs" are assembled (presumably) for people who have not already sprung for the complete-season sets of the show (DVD Talk has reviews of the show's first three seasons and three of the previous randomized "packs" right over here). Therefore, the Rigby Pack actually contains episodes from all five seasons of the show, all jumbled together (11 of the episodes in this set have never been released on DVD before). Unlike with Cartoon Network's occasionally frustrating Adventure Time sets, usually the mixed-up chronology does not significantly impact the enjoyment of each Regular Show episode. This time, however, there is a pretty silly chronology switch right at the start. The disc kicks off with "Bank Shot," in which Rigby turns to his buff, younger brother Don for help in winning a basketball game. In the second episode on the disc, we are introduced to Don for the first time. Why the set doesn't kick off with the "Don" episode -- one of the show's best, in my opinion -- is a mystery.

The Video:
As usual, Cartoon Network gives a fine-looking widescreen 1.77:1 presentation with vivid colors and strong black levels. I did notice some weird hiccups with interlacing during "The Heart of a Stuntman," but that is a fairly minor and isolated incident.

The Audio:
As usual, the Dolby 2.0 stereo mix is defect-free and clear as a bell. English SDH are also supplied for reading.

Final Thoughts:
If you're the kind of person who prefers to wait for complete-season sets to plunk down your hard-earned dough for Regular Show, I understand and respect that choice. If you just want to watch some new funny episodes, this pretty well-curated set comes Highly Recommended. Yaaaay-yuuh! 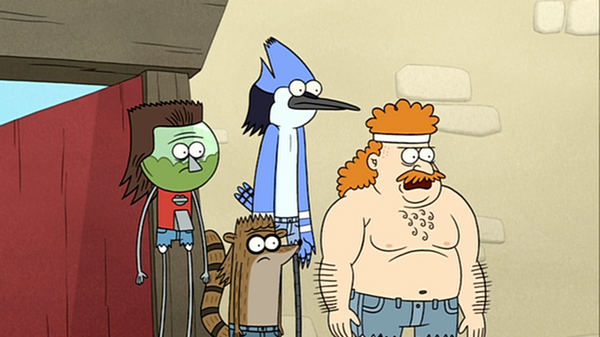