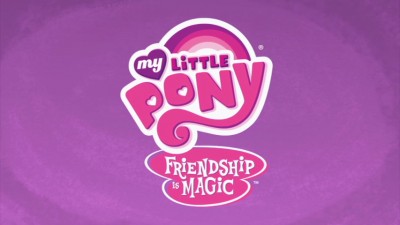 The Show
There is no such thing as Halloween in Equestria, the home of the pony citizens of My Little Pony: Friendship is Magic, so curating a Halloween collection of episodes from the show was an impossible task. However, there have been quite a few spooky episodes over the course of its first four seasons, which is where this release finds its materials, chief amongst them being "Luna Eclipsed," which checks out the ponies' Halloween equivalent of Nightmare Night, where little ponies (and some big ones, like the chicken-suited Pinkie Pie) go around collecting candy and doing all sorts of Halloween-y stuff, before sacrificing some of the candy to Nightmare Moon, the spectral being who will eat children who don't give up a part of their haul. Nightmare Moon, happens to be the sister of Equestria's ruler Princess Celestia, and she may be a bit misunderstood, so she tries her hand at enjoying Nightmare Night with the Mane Six, the core heroines of the show. To say it doesn't go smoothly would be correct, requiring the ponies' help to straighten things out.

The remainder of the episodes are less directly Halloween-y, but maintain a high fright level, particularly the pair focusing on the Cutie Mark Crusaders, a trio of young ponies in search of their Cutie Marks, the identification on the ponies' flank that shows their special attribute. In "Stare Master," they find themselves being watched by the quiet-natured Fluttershy, you has her hooves full with the three would-be adventurers, while in "Sleepless in Ponyville," campfire tales courtesy of Rainbow Dash leave one of the youngins unable to nod off without nightmares, but she wants to impress her hero with how tough she is. These three characters, smaller versions of other popular ponies, including Applejack and Rarity, hit the mark with younger viewers, as their outsider status with the Mane Six and their defined mission make them stand-out from the pony crowd. 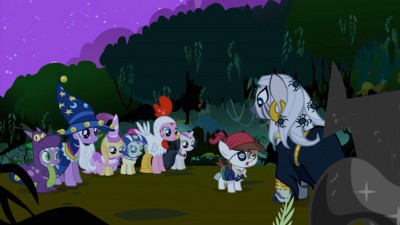 "Boast Busters," an early entry from the first season, introduces another pony, the magical unicorn Trixie, who comes to town claiming she has stronger magic than anyone, including Twilight, who doesn't want to show off her own particularly impressive skills, for fear of looking like a braggart. This episode comes from a time when morals were a bit more of a present element in the show (along with the ever annoying boy dragon Spike) and so it's a bit out of sync with the series' usual feel. It does however feature a nice battle with a massive foe for the ponies.

As with the previous DVD release, the fourth season's story arc, involving the Elements of Harmony, and the mystery that unfolded around them, makes many of the episodes from that run hard to break away from the rest. That's exactly the case with "Castle Mane-ia," which sees the ponies exploring the Castle of the Two Sisters, which is tied in with the ongoing story of the elements. Even so, its an entertaining haunted house tale, though the ending is a tad ridiculous. "Bats!", another fourth season episode, is a bit more self-contained, as vampire fruit bats descend on AppleJack's orchard, damaging her crops. However, after some investigating, it becomes clear that they may not be responsible, and the real culprit is far more unexpected (and quite creepy.) 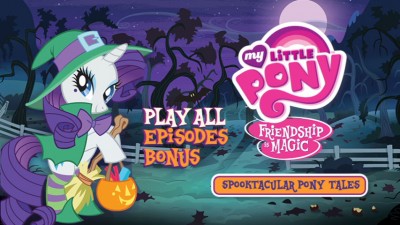 The DVD
Packaged in a white single-width keepcase, which is inside a slipcover that repeats the cover art, this DVD offers up six episodes. The disc has a static, anamorphic widescreen menu, with options to play all the episodes, select shows and check out the extras. There are no audio options and no subtitles, though closed captioning is included.

The Quality
Presented in anamorphic widescreen, these episodes are bright and colorful, just as you'd hope this series would look (albeit in standard definition.) The adorably cute animation remains eye-catching and vivid, showing no signs of compression artifacts, despite frequent fast-moving action. This show is pure kiddie eye-candy and the DVD handles the material well.

The audio has received a bump up to Dolby Digital 5.1 tracks, and they sound very nice, though there aren't the catchy songs previous releases have featured. Even so, the presentation is solid, using the surrounds to boost the music and some of the sound effects. You're not going to find a fully engaged, dynamic mix, but it's fun nonetheless

The Extras
The only bonus content on the disc takes the form of a single sing-along segment for the song "Bats" from the episode "Bats!" There are on-screen karaoke-like lyrics to use in singing along with the cast, though this is hardly a crowd-pleasing tune.

In the package though is a fun, hand-colored Nightmare Night poster (folding out to the size of about eight DVD cases (two wide, four high) and a two-sided paper stencil to use in making jack-o-lanterns of Nightmare Moon and Trixie. It feels like the most extensive extras to be found in a My Little Pony release. 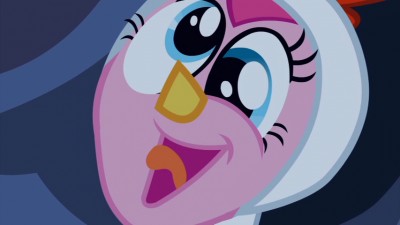 The Bottom Line
The concept of the holiday-themed DVD collection has always seemed a bit strange, considering their limited appeal, but when you have a kid who wants to watch them, whether the time is appropriate or not, they will get frequent spins. This disc, which includes several fun stories, including appearances by the popular Cutie Mark Crusaders and a big Princess Luna episode, and offers them in fine quality and with a few tangible extras, is one that won't bore fans of the show.