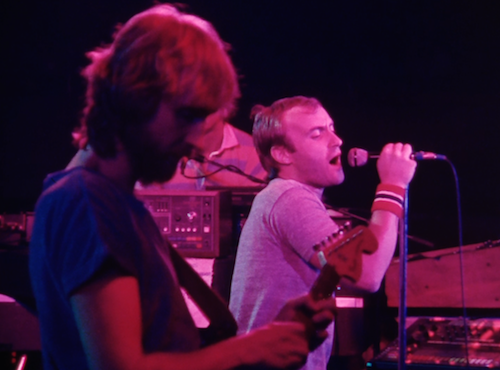 There's a funny plotline in the "Sunday Funday" episode of the new series You're The Worst (which I just had the pleasure of reviewing), where the insecure lead character Jimmy tries to get Gretchen, the woman he is dating, to pick whether she prefers Peter Gabriel-led Genesis or Phil Collins-led Genesis. She claims to like both versions of the band equally, which he finds impossible. The show turns this into an allegory for his desire to have her commit to him and not date another dude on the side, but the storyline touches on one of the key battlegrounds in rock music. As much as "Stones vs. Beatles," or "David Lee Roth vs. Sammy Hagar," "Gabriel vs. Collins" is a Rorshach test that determines not only what kind of a music fan you are, but what kind of a person you are. You must pick a side.

Except... well... I like them both. I was around six years old when the uber-poppy Invisible Touch album by a Collins-fronted Genesis was released, and it is a part of my DNA. I know that album front to back. I've heard it more times than most fanatical youngsters have seen Frozen. This fascination inevitably led me to seek out the rest of the band's albums -- which, in a pre-Spotify world, essentially became a decades-long process -- and I've certainly come to appreciate and love the progressive-rock craftsmanship of Gabriel-era achievements like Selling England By The Pound and The Lamb Lies Down on Broadway.

In many ways, that's why I loved the band's Three Sides Live* album as a high schooler. Released in 1982, it finds Genesis right at the moment where their sound is getting slicker but their repertoire could still mostly be described as "art rock," if not strictly "progressive." I'm sure some fans at the time were starting to cry foul, but I bet many centrists like me found plenty to enjoy.

The concert film/documentary Three Sides Live, directed by Stuart Orme, provides live visuals for much of the material found on that album (although some of the album versions were recorded at different shows and the film includes some tracks left off the album entirely). Shot mostly in 1981 at the Nassau Coliseum in Long Island, NY, and augmented by backstage footage and a few excerpted songs shot at The Savoy in New York City, the film also captures Genesis at a visual crossroads. Though fog machines and choreographed lighting are implemented a few times to goose the drama of certain songs, the design is far more run-of-the-mill than either the elaborate fantasias of the old days or the massive video screen-dominated events still to come. Even the casual way that the band members are dressed during this show seems like an intentional shrugging-off of stadium rock spectacle. Wearing a gray T-shirt, baggy slacks that resemble jogging pants, and sweatbands on his wrists, Phil Collins looks like he should be playing a game of pick-up basketball, not fronting a world-famous rock band. Director Orme more than compensates for the straightforwardness of the show's design with eye-catching camera moves, interesting compositions, and rhythmic editing. 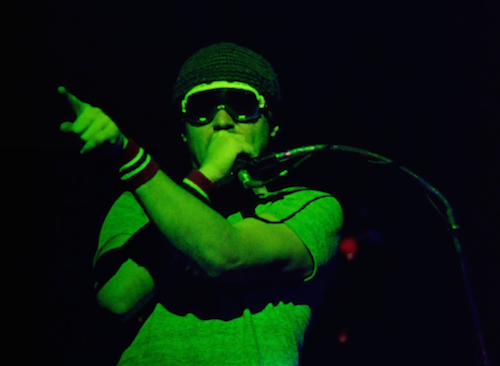 Touring in support of 1981's Abacab, the band focuses the set list largely upon tracks from that album and the one released right before it, 1980's Duke. The live arrangements don't stray drastically from the album versions, but the concert atmosphere, plus the give and take between the official line-up of Genesis from this era -- Phil Collins (vocals/drums), Mike Rutherford (guitar/bass), and Tony Banks (keyboards) -- and their touring collaborators, Daryl Stuermer (guitar/bass) and Chester Thompson (drums), adds a bit of playfulness and electricity to the performances.

Inevitably, there is a focus mostly on singles from this era -- "Misunderstanding," "No Reply At All," "Turn It On Again" -- but some deep cuts slip in. The magnificent "Dodo/Lurker" questions man's dominion over the animals, under a spooky funk groove. The Gabriel-era lullaby-turned-paranoid-rant "In The Cage" is expanded into a gloriously epic, 17-minute medley that incorporates elements of "The Cinema Show" and "Colony of the Slippermen" before gently returning us back to a lullaby with an passionate version of "Afterglow" that dwarfs the original. The minimalist lark "Who Dunnit?" seems like the kind of album cut that would be left out of the live show, but it gets an appropriately goofball live presentation here, in which guitarist Mike Rutherford has a go at the drums.

In the interviews that appear between (and sometimes, frustratingly, during) songs, the band seems optimistic and exhausted. They field questions about their collaborative habits, their changing sound, Phil's solo career, their relationship with Peter Gabriel, and on and on. It provides a slight glimpse into the working life of the band, but mostly it provides a glimpse into how often they must be forced to answer similar questions from fans and journalists. I'd be exhausted too.

Thirty-plus years after its initial release, Three Sides Live seems suited to a pretty specific niche of Genesis fan: the kind who loves the band's poppy singles as much as their trippy epics. (I suspect there are more of us out there than common knowledge would dictate.) The film highlights some solid performances and acts as a valuable time capsule of a band in transition. It's wonderful to have it back in circulation.

*The original North American version of this double-LP (which I had) consisted of three sides of concert recordings and a fourth side of UK B-sides. At this point, though, the original meaning of the title has been rendered moot: The UK version of the album had a fourth side of older live songs, and all worldwide CD/download reissues put out in the last twenty years have gone with the UK tracklist. 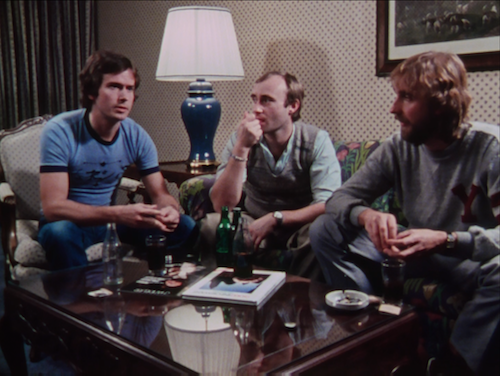 The Video:
There are loads of Amazon commenters who are bemoaning the image quality on this film, but to these eyes, the AVC-encoded 1080i 1.33:1 transfer looks quite satisfactory, considering that it originated on 16mm film. Sure, it's a bit grainy and dated-looking, but the image is clean and stable, and there's a surprising amount of detail that has been brought out of this old footage. Anyone grumbling that this looks no better than the original VHS release from the '80s hasn't actually looked at a videotape in a while.

The Audio:
Wowee. This disc offers two gorgeous uncompressed audio options, LPCM 2.0 stereo and DTS-HD MA 96khz/24-bit 5.1 surround. The stereo option is a little more forceful while the surround mix goes for a more enveloping ambience. Both versions are dynamic and have been beautifully restored and remastered. The disc also offers English, German, Spanish, French, and Italian subtitles, but they only appear during the spoken interludes and not during the songs.

Special Features:
What a great idea! Since some of the songs in the film are presented slightly abridged or are interrupted by interviews, the disc offers Audio-Only Full-Length Versions (47:35 total) of these songs plus a few tracks from the Three Sides Live album that didn't make it into the film. All of these selections are offered in LPCM 2.0 stereo and DTS-HD MA 96khz/24-bit 5.1 surround.

Final Thoughts:
Three Sides Live is an entertaining concert film that looks good and sounds fantastic (!) on Blu-ray. Considering that only some of Genesis's crossover hit singles are featured, this is probably best appreciated by fans or folks who at least have more than a passing interest in the band. If that describes you, this wonderful presentation comes Highly Recommended. 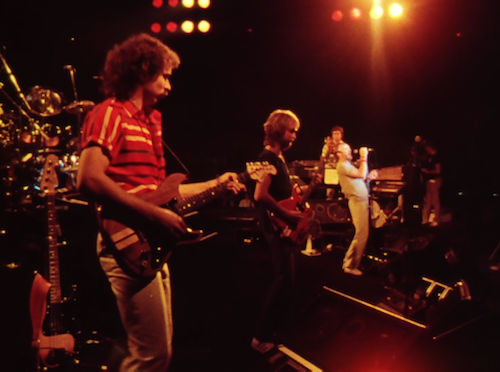