Opens October 3rd in Los Angeles and on VOD and in New York October 10th. 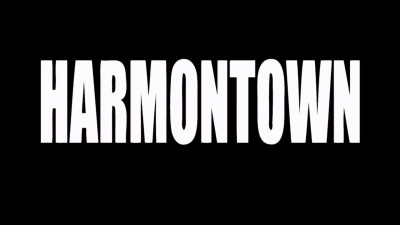 
The Movie
You need not be a resident of Harmontown to enjoy Harmontown, but it certainly helps. The former Harmontown is a podcast recorded live at the Nerdmelt performance space in Los Angeles (and elsewhere), starring Community creator Dan Harmon and his co-host Jeff B. Davis. It's very loosely organized and a bit free-form, and appeals to a very niche audience (like most podcasts and, well, most Harmon creations.) The latter Harmontown is a documentary by Neil Berkeley (the Wayne White doc Beauty is Embarrassing) , which followed Harmon, Davis and company as they took the podcast on a coast-to-coast bus tour. Ostensibly, it's a tour movie, and it has a lot of the elements that make tour movies, like the live performance footage, the peeks behind the scene and the look at what life is like on the road.

If you peel that back a hair though, the movie is really the story of two men. The first one is obviously Harmon, who is presented in whole, as he seems to hide nothing about himself. A writer of immense talent, he is able to inspire tremendous loyalty in his fans and collaborators because of the truth about life that informs his work and his single-minded pursuit of a personal vision of creative perfection. However, he's lacking in social graces and has issues with focus and time management, which have cost him dearly, as illustrated in this film, which weaves the story of Harmon's professional highs and lows (which are very closely connected) into the tour storyline. Testimony from a slew of people who have worked with him, including Ben Stiller, Jack Black, Sarah Silverman, Rob Schrab and most of the main cast of Community (surprisingly, Chevy Chase is not included), lay out all the pros and cons rather succinctly, but getting an intimate perspective on his relationship with his girlfriend Erin is the capper. 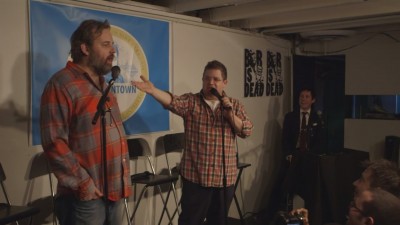 The other man of the hour is Spencer, a manchild who wandered into a Harmontown taping one evening looking to play Dungeons and Dragons, only to become an integral part of the show, and a part of the tour as well. The physical embodiment of Harmon's fanbase, Spencer is awkward and a bit introverted, but mostly positive, except when he's utterly despondent. Acting as dungeon master on the show, he has more control that he likely ever does in real life (he lives with his parents), and he forms a bond with Harmon that goes beyond hero and worshipper. Spencer is a prism through which the film gets to explore the Harmon fandom a bit, as the audience is showcased along the way, revealing why Harmon's creations mean so much to them, and a bit about the devotion Harmon shows in return.

Though the tour and its many stops (as well as the ancillary activities) give the film structure, there's a neat secondary plot, as the tour took place when Harmon was fired from his own creation, following the third season of Community. He rebounded nicely, selling two pitches to CBS and FOX, however he hadn't written them and scripts were due, which results in him having to write while on the tour. So not only does the film show a tour and tell the story of these two men, but it also gives a rarely-seen look at the TV development process, including the opportunity to sit in on a notes call, as the network comments on Harmon's writing (you can imagine how this goes.) The access Berkeley received and manner in which he captured it all, utilizing everything from GoPros to VHS camcorders, resulted in the finely-crafted (if, at 101 minutes [a perfectly Harmon-esque number], slightly long) film he delivered.

Is Patton Oswalt in it?**
Yes, he is. He appears as a guest on Harmon's podcast, talking about touring and being surprised about Phoenix.


**The "Is Patton Oswalt in it?" section is a response to Oswalt's seeming omnipresence in all things. It provides a way to easily compare dissimilar shows and movies on a key criteria. 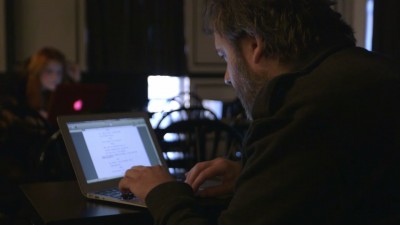 The Bottom Line
It's very hard to separate Harmon from Harmontown (naturally), so it's difficult to say how someone who isn't a member of his rabid fanbase will receive this film. Sure, you can attempt to pick apart the separate elements: the direction and technique is great, the story is effective and the subjects are interesting. But there's a definite question: if you don't already know and like Harmon, will you enjoy this movie? (Because, let's face it, if you do, you absolutely will.) In giving it some thought though, it may offer even more to this admittedly larger audience, who are learning so much of this for the first time, as Berkeley unfolds Harmon's story in an way that pulls you in; giving you bits and pieces. However, Harmon is polarizing, so he may turn off people as quickly as the movie brings them closer. Harmon fans should obviously storm your local theater or VOD outlet, but so should anyone who's enjoyed documentaries about tortured geniuses.