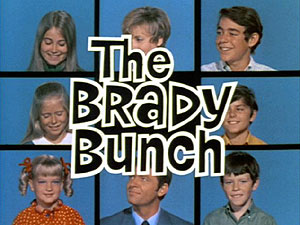 
The Story So Far…
The story of a lovely lady and a man named Brady started in 1969 and was told for five seasons, as the blended Brady family, with three girls and three boys, represented an idyllic home life that gave America an escapist fantasy to enjoy, one that remains entertaining today, even if it is extremely cheesy and dated.

Paramount released the complete run ofThe Brady Bunch, seasons one through five, on DVD between February of 2005 and February of 2006. DVDTalk has reviews of each of those sets.

The Show
The first season got the ball rolling, bringing together the two sides of the Bunch and establishing the feel of the show. Nothing much would change in the second year, as the show honed the sibling rivalry to establish a consistent theme. Whether it was Bobby feeling shortchanged because his brothers and sisters all have won awards or Jan wanting to stand out from Marcia and Cindy, the dynamic between the six Brady kids was essentially the dynamic of the show. But even when they were at each other's throats, they were still there for each other, such as when Peter stands up to a bully for Cindy in "A Fistful of Reasons," or when the kids risk missing a vacation to save Peter's bacon in "Confessions, Confessions." It's that kind of give and take in the family that somewhat grounded an otherwise fantasy show.

Though the first season of the series delivered many of the most memorable episodes in the show's history, there were plenty more left for Season Two. "Where There's Smoke..." features a family scandal, as Greg gets busted for smoking, while "Will the Real Jan Brady Please Stand Up?" features Jan's goofy curly black wig, as part of her ongoing anti-Marcia efforts. And if anyone can watch "The Winner," where Bobby competes in a messy ice cream-eating contest with the King of Kartoons, and forget the gloopy climax or the disturbing show host, you're a better man (or woman) than I. 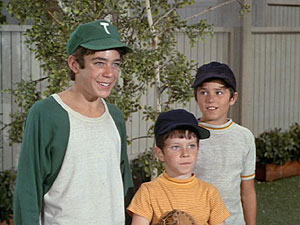 This season put something on a spotlight on Cindy and Jan, with eight episodes focused on them. Jan had three episodes centered around her neuroses, while Cindy was the focus of five episodes of her own, often because of some trouble she causes. The phrase "She sells seashells by the seashore" is memorable when delivered by a lisping Cindy in "Fistful," and leads to Bobby getting a black eye, while she may have put "tattle-tale" into the lexicon of a new generation with the appropriately named "The Tattle-Tale."

Jan also caused her share of trouble, but it was normally all brought onto herself. When she wasn't making up a boyfriend named George Glass in "The Not-So-Ugly Duckling," she was playing practical jokes on her family and letting a mouse loose on the house. I can't imagine anyone but a middle child appreciating her problems, and she became something of a cultural joke as the least well-adjusted Brady kid.

One of the best parts of watching a show of this age that reflects the time period, is seeing how much things change, as well as how much they don't change. For instance, in "Smoke," Carol and Greg talk badly about smoking, saying that they smoked as kids because they "didn't have all the evidence" they did. Yet, it would take almost 30 more years before any real action was taken on smoking. Meanwhile, in "The Liberation of Marcia Brady," the concept of women's liberation is handled with such a way that would cause protests now.

The most dated episode might be "Our Son, The Man," which finds Greg attempting to force his way into adulthood. The way he goes about it, with awful late-'60s clothes and a garishly decorated "pad," is pure '70s cheese. A running joke in the series is Greg's "far out" talk, which was just as stupid then as it is now.

It's worth noting that this season, the theme song is sung not by The Peppermint Trolley Company, but by the Brady Kids, and that the outfits worn by the Bunch in the opening and closing titles changed from Season One. Considering the show wasn't exactly a ratings success, to have worried about such matters back in 1970 was a rarity on TV. 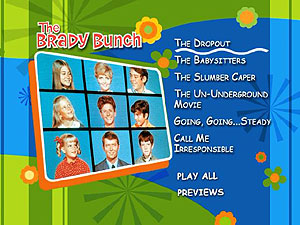 The Discs
An exclusive release for Target, the second season of The Brady Bunch hits DVD with a newly-pressed four-disc set of the same content released in 2005, though this time it's packaged in a clear, single-width keepcase with a dual-hubbed tray. In the case is a two-sided cover that has an episode guide on the inside, while the slipcover repeats the stylish new cover art (a big improvement over the original set's) with added embossing and spot-UV coating. The discs feature the same static, full-frame menus as before, which list the episodes and include a play-all feature. The menus are standard across the four discs, and less complex than the first season's. There are no subtitles or language options, but the episodes do have closed captioning. Each episode also begins with the classic "Brady Bunch IN COLOR" still image that sets the mood nicely.

The Quality
No changes here, so these reports are mainly the same:
The lack of effort put into this set's extras (see the Extras) carried over to the color quality of the episodes. Whereas the full-frame episodes on the first DVDs looked very nice at times, this set just seems a bit dull overall. The same problems with consistency that plagued the first episodes are back again, as the color quality will change in the middle of a scene, sometimes from camera to camera. The first episode, "The Dropout," and episode eight, "Fistful" are two of the worst offenders, as they look as if they were colorized, instead of shot in color. When the video works, the color is bright and clear, with a decent amount of detail, but that's not often the case. One place where the transfers work well though is in terms of how clean they are, without much in terms of dirt or damage, though "Fistful" has a consistent floating hair that becomes distracting about halfway through the episode.

The audio fares better, presenting a solid, if unspectacular Dolby Digital feed of a mono mix. The sound is clean, without distortion, and is well-representative of the times.

The Extras
Paramount really dropped the ball here back in 2005, leaving this season high and dry, after putting together three entertaining commentaries for Season One and a featurette. Nothing has changed, as the only extras on this set remains the previews on Disc One, which are STILL the same, despite Happy Days Season One not "coming soon" since August of 2004 (this ad was out of date almost 10 years ago.)

The Bottom Line
Season Two of The Brady Bunch presents even more classic Brady plots, including the introduction of George Glass, Greg's smoking and Cindy's lisp. And with Greg in high school, the show has an even deeper root in '60s/'70s pop culture, increasing the cheese factor. The DVD presentation hasn't changed since 2005, and Paramount has decided not to rectify the big fat nothing offered on the original Season Two set. Fans will want to own it for a sense of completion, but anyone else will likely feel some disappointment paying for this set.